Today we transferred from the Atherton area and drove north to Julatten making many scheduled stops along the way. We listed lots of new species and saw a dramatic change in landscape.

We started with an early breakfast and then a stroll around the grounds of our wonderful lodge, all the usual bird species performed well including very close encounters with Spotted Catbird, Victoria’s Riflebird, Lewin’s Honeyeater and Laughing Kookaburra. We added Black-faced Monarch and White-headed Pigeon just before we left. 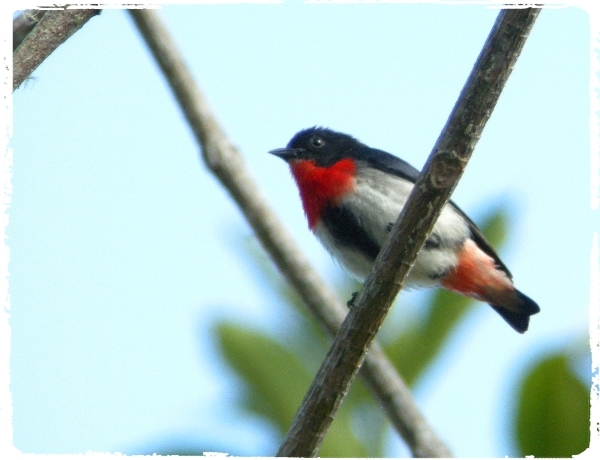 Our first stop was the lake at Eacham we arrived as early as we could in the hope of finding Chowchilla and possibly Fernwren, we saw neither but enjoyed a morning walk in the forest listening to the dawn chorus. We saw Tooth-billed Bowerbird singing its heart out and a Bower’s Shrikethrush delivering a wonderful melodic song. We saw Grey & Northern Fantails, lots of common Honeyeaters and we finished off with a nice sighting of two Fan-tailed Cuckoos. Around the lake and car park picnic areas we saw Mistletoe Bird, Figbird, Olive-backed Oriole and more Honeyeaters. 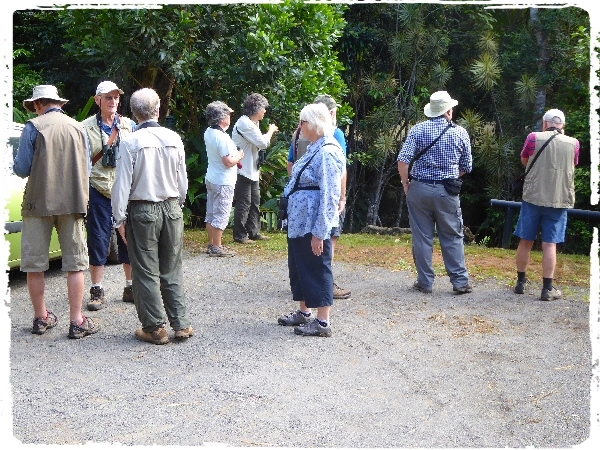 the group assembling at Chambers Lodge

We moved on to the Mareeba area, stopping to look at both species of Crane, Brolga & Sarus, feeding in a ploughed field. Just passed Mareeba we stopped to look over part of Lake Mitchell where a number of species were feeding on the water or in the marshes. Our first Black Swans were seen in good numbers, we also saw a single Caspian Tern, three White-bellied Sea-Eagles, lots of Black Kites, egrets, cormorants and Magpie Geese but very few ducks.

We also stopped in a wooded area to look for Little Eagles, we found nesting Black Kites, a Black-faced Cuckoo-Shrike also on its nest, Forest Kingfisher, Lemon-bellied Flycatcher but no sign of the eagles. 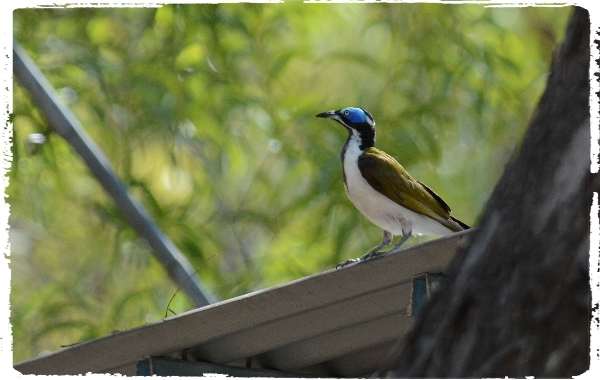 Next we stopped in the village of Mount Molloy, first for coffee and later for lunch. Our coffee stop produced several species including a few new ones. Little Friar, Scaly-breasted Lorikeet and Rufous Whistler to name but a few. Whilst during our lunch break we added Blue-faced Honeyeater and watched a group of the beautiful Rainbow Lorikeet. 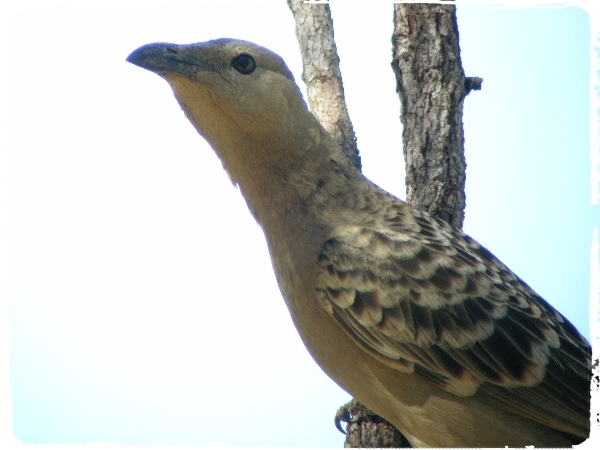 For the afternoon birding we drove further north to Mount Carbine stopping once in a side road to search for Australian Bustard. We saw four or five of these magnificent beasts with a couple of the makes very close to the roadside. Next we stopped at the Carbine caravan park and spent a good hour walking through the trees, it was very productive. Our main target species was the Tawny Frogmouth, this strange animal looks prehistoric we saw a pair, one of them was on its nest. 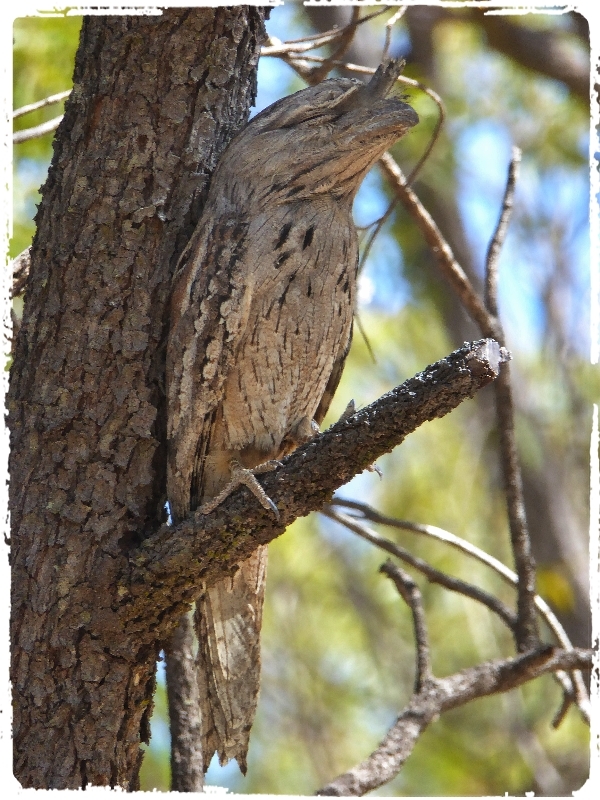 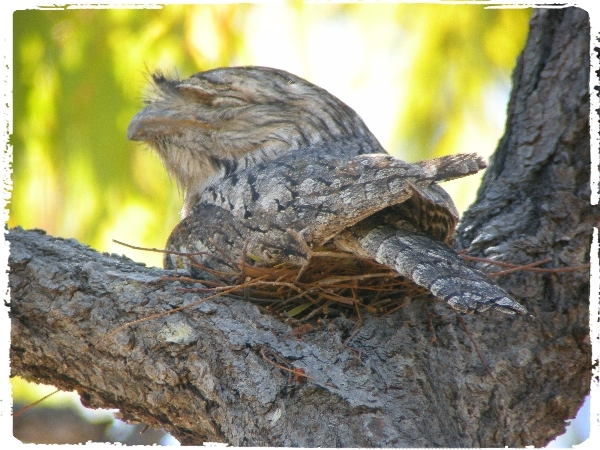 The Great Bowerbird was another of our targets, we found the bower but it took a while for the male to return, he was fantastic. A perfect bower must be kept tidy at all times, he flew down and began tidying both ends, his collection of display-items were all shiny white, mainly stones but also plastic tops, small bits of glass and bottle tops. 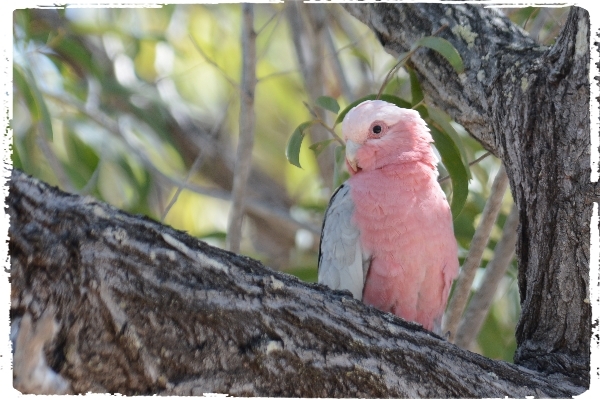 another beauty - the Galah taken by Bob Longhorn

Now we turned round and headed back south turning off towards Julatten just before we re-entered Mt. Molloy, we stopped at a little reserve called Abattoir Swamp. It was very windy there we only saw a few birds, Mistletoe Bird, Graceful Honeyeater, Rufous Whistler and a few common species like Willy Wagtail. A short boardwalk led us to a hide which overlooked the swamp which was virtually dry and bird-less. 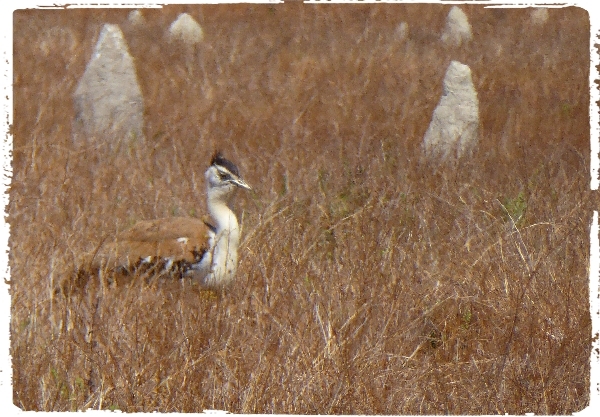 Lastly we stopped at a well-known area to look for Blue-faced Parrot-Finch without success, but we did see a number of other birds, including the beautiful White-cheeked Honeyeater and some Topknot Pigeons.

We arrived at Kingfisher Park around 5pm and settled into our rooms, some of the group just relaxed, others went walking in the grounds, it is a wonderful venue for birding groups, it has large forested grounds, an orchard, a stream where Platypus is seen regularly and many bird feeders near the apartments.  At 6:30pm we drove to a large pub a couple of k’s along the road for dinner, I was in bed by 9:30pm! Our list of species is approaching the 180 mark after 5 days in the field.