Rob Griffiths picked me up from Sydney Airport and we drove to his house in the suburb of Balmain. Rob is going to lead the New South Wales section of the forth-coming tour. Rob, Sylvie and I sat up and talked until just after 11pm and then I went to bed, I was flight-zonked and slept extremely well.

It was nice to wake up this morning to a lovely spring day, it was cloudy but a nice temp. of around 16C. A Grey Butcherbird was the first bird-call of the trip which was quickly followed by Noisy Mynahs living up to their name. A short birding session in the garden confirmed my ‘calling-list’ with sightings of both species and also Rainbow Parakeets, how could such a beautiful and exotic looking bird be a common garden species? 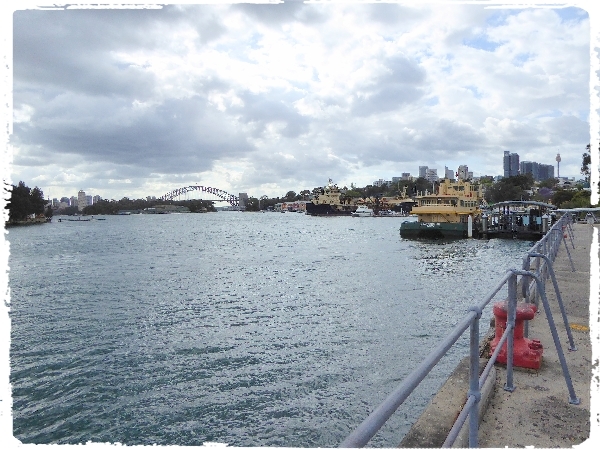 Sydney harbour looking from the 'Dry Dock' area of Balmain

After breakfast Rob and I walked down to the quay at the harbour, we walked through lovely parkland and the re-developed quayside walkways with countless dog walkers and feral pigeons. This old ‘Dry-dock’ area has a colourful history of which Rob enlightened me as we walked, interrupted only by bird sightings and calls. We added Silver Gull, Pied Cormorant, Red Wattlebird, Willy Wagtail, Australian Magpie, White Ibis, Magpie Lark, Black-faced Cuckoo-Shrike, Crested Pigeon, Spotted Turtle Dove and a Koel (a migrant Cuckoo) called as from the other side of the water (where we had begun our walk) so we made our way back there. The Koel moved further away as we arrived and so we missed it. 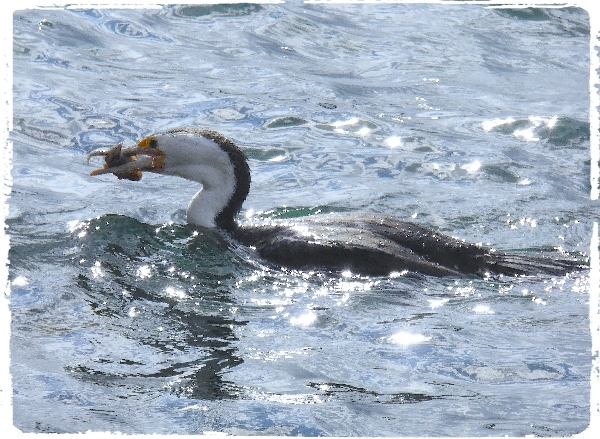 However, a good sighting of a pair of Laughing Kookaburras more than made up for our miss. That concluded our birding in Sydney for now. We had found 15 species most of which are very common birds in the Sydney area, it was also interesting to note that a third of them were black and white in colour. 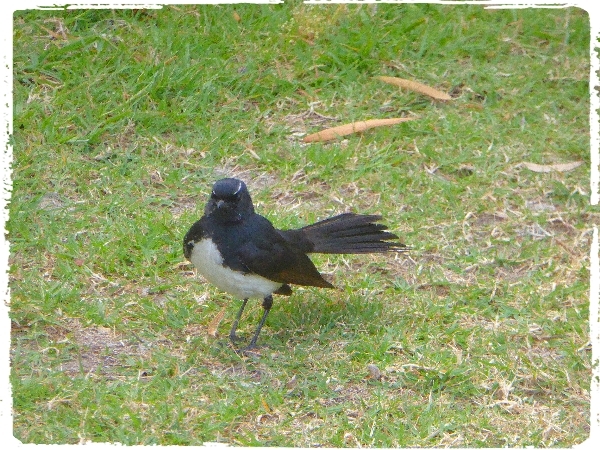 We walked into the local High Street to do a couple of chores before walking back to the house. I packed my bags said goodbye to Sylvie, then Rob kindly drove me back to the airport to catch my 2pm flight to Cairns, it’s hard to believe that after a 3 ½ hour flight you land in the same country. 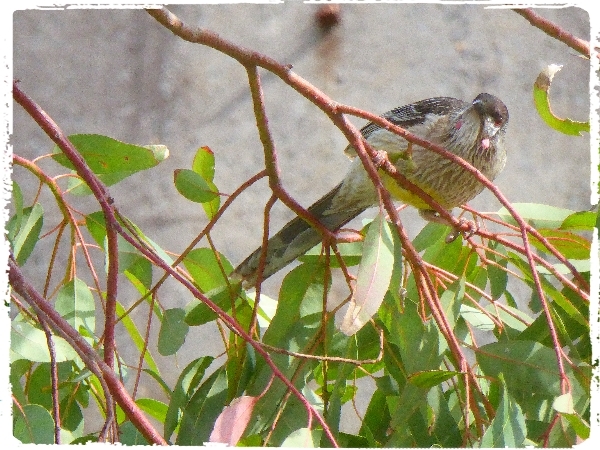 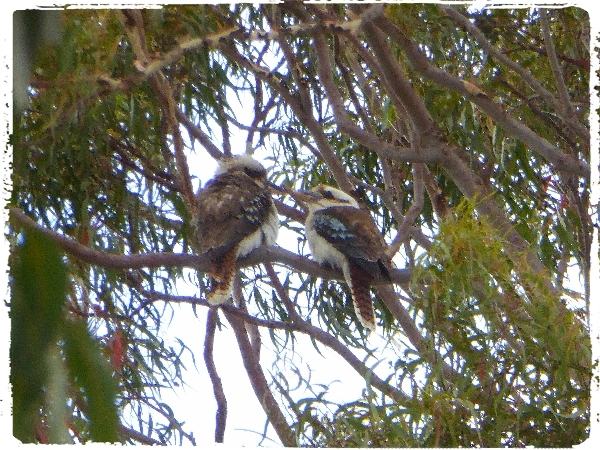 Cairns was hot when I landed at 4pm local time (yes I changed my watch for the fourth time in a week!), I collected my hire car and drove into town, heading for the famous esplanade. The first birder I bumped into along the Esplanade was Bob Longhorn, one of the group, a very early arrival. 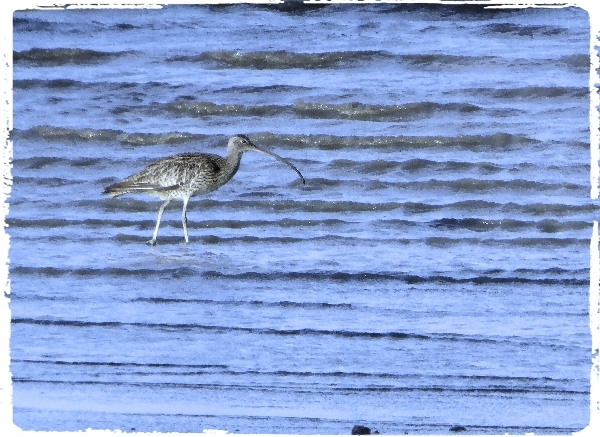 We walked together birding as we went, the tide was just going out and a number of species were feeding on the exposed mud, birds were dotted all along the shoreline with a bigger concentration towards the northern mangrove swamp so that’s where we headed. 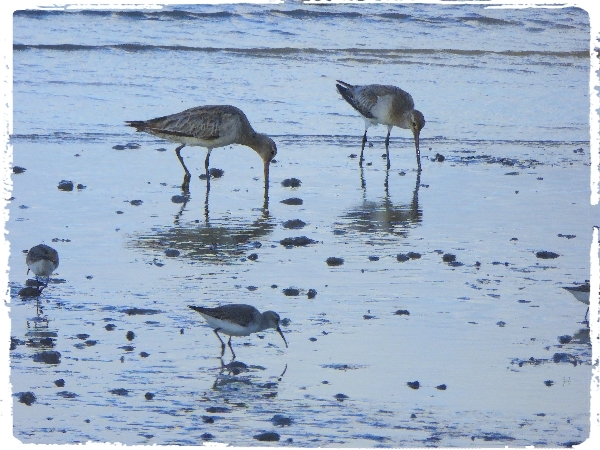 could have bern taken in Europe! Bar-tailed Godwit with Curlew Sandpipers 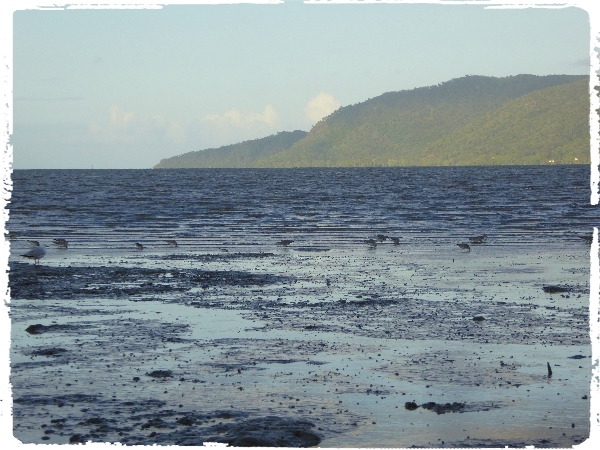 A view out into the bay from Cairns Esplanade - Silver Gull, Barwits and Great Knot in the foreground

The strip of parkland between the beach and the town was crowded with people, hundreds of them, I’ve never seen so many people keeping fit, joggers, cyclists, boarders, etc etc. All them appeared oblivious to the huge number of Rainbow Lorikeets gathering in the trees above them. We walked to the mangroves noting many Willy Wagtails, Indian Mynahs, Magpie Larks, Imperial Pigeons, Peaceful Doves, Olive-backed Orioles, Honeyeater sp., 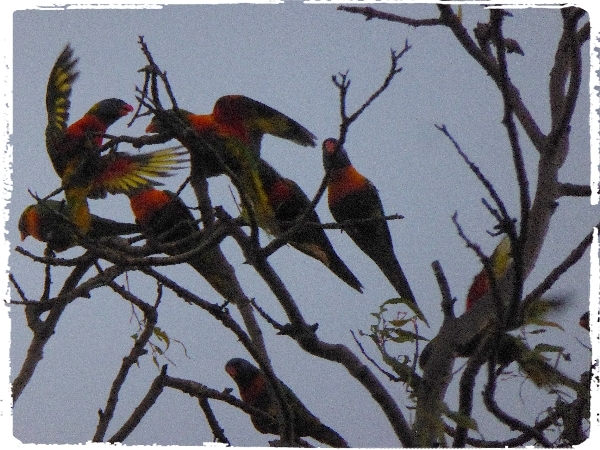 An Australian Pelican caused a huge panic amongst the parakeet roosts as it flew very low over the parkland, what a noise and such numbers of birds, it was amazing to see. Very soon the light began to fail and in a matter of minutes it was twilight then it went dark! At 6pm we parted company I drove a few kilometers out of town to Stratford where my good friends Dan and Gail Reardon live, they are putting me up for 3 nights.

A delicious fish meal of Goldenband Snapper with a cold beer was fantastic, what a great meal, it was very enjoyable meeting Dan and Gail and Dan 'junior' again. Dan and Gail are ‘early-to-bed’, in fact we were all tucked in by 9pm!