WEATHER: Wall to wall sunshine all day, chilly to start but 15+ all day.

This was my second and last day with David from the USA, I collected him from Malaga port yesterday and intend to drop him off at Cadiz Port later this afternoon.

It was a birders dream day, bright sunshine, no wind, superb light and a stack of birds. Last night we stayed at the Meson de Sancho hotel near Tarifa, they serve breakfast at 8am so we had no pre-breakfast birding time because it was still dark until just before 8. From the car park we saw 25 Griffon Vultures and Common Chaffinch. 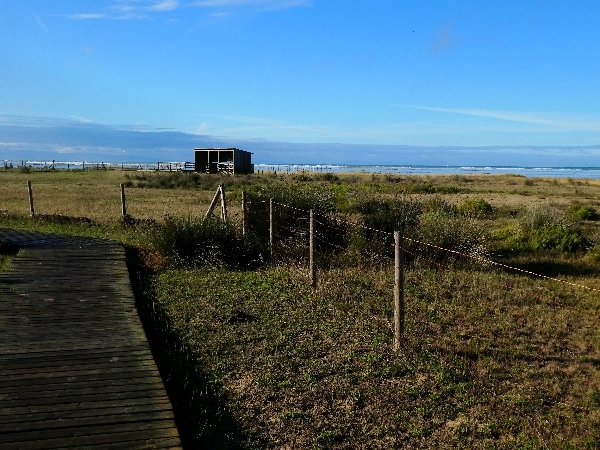 THE HIDE ON LOS LANCES BEACH

Our first birding stop was the beach at Los Lances just outside of Tarifa, we arrived at 9am. From the car park we were soon notching up new birds for the list. Both Common and Spotless Starlings sat side by side, we then found a large flock of Calandra Larks with Corn Buntings and Crested Larks. European Goldfinches, Common Stonechat and White Wagtail were also seen along the track to Los Lances beach. 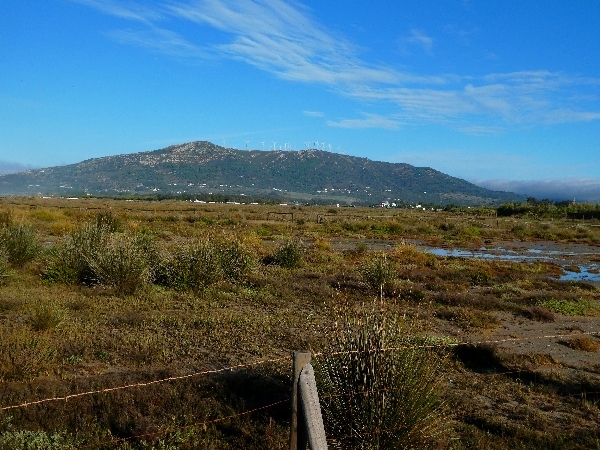 LOOKING INLAND FROM THE BEACH

From the boardwalk we found a dozen or so of Meadow Pipits, a single Slender-billed Gull sat on the marsh (it didn’t look too well).  We could see that the tide was very high, the whole beach was submerged except for a few pockets of higher ground, these were covered in birds. 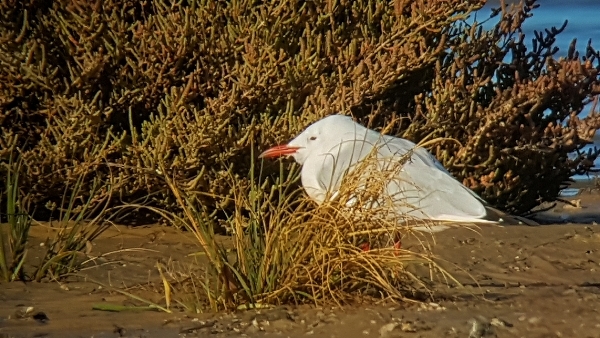 From the hide we started listing waders, two great finds at this time of the year were: Little Stint and Red Knot, we also found Dunlin, lots of Sanderling, Kentish Plover and a Common Kingfisher. We listed six gull species, Slender-billed, Audouin’s, Mediterranean, Black-headed, Yellow-legged and Lesser Black=backed Gulls. 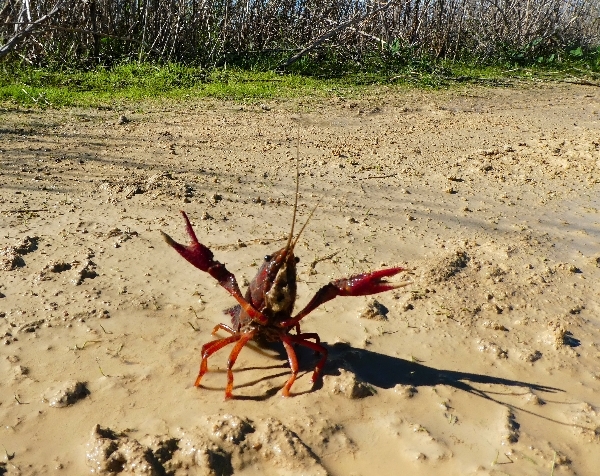 Crayfish are very common at La Janda, this one didn't like me.

Next, we drove to La Janda, hoping that the central track was driveable after the recent rains. We saw Marsh Harrier, Common Buzzard and Common Kestrel along the way.  Along the approach track we had close views of Corn Bunting, Zitting Cisticola, Common Stonechat and European Goldfinch.

The central track was fine, plenty of puddles but easily driveable. We parked at the beginning of the track and I watched David marvel at the number of Common Cranes and White Storks that were presented in front of him. 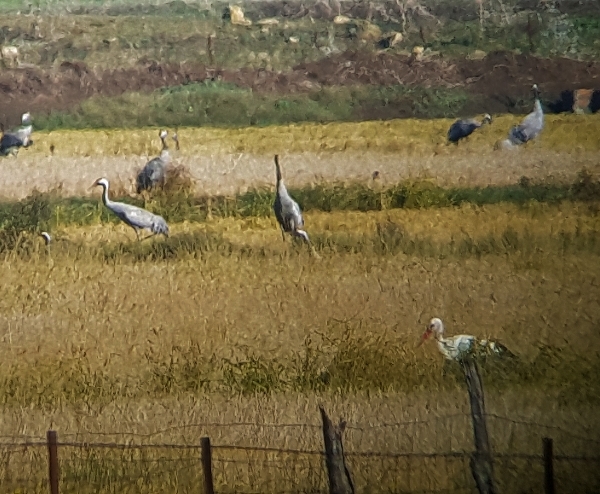 record shot the Common Crane with a single White Stork

The light was exquisite you couldn’t have wanted it better. We found Green Sandpiper, Common Kingfisher, Western Jackdaw, Northern Lapwing, Calandra Lark, Marsh Harrier (at least 10), Grey Herons, Cattle, Little and a Great Egret.  Great views of Cetti’s Warbler in the scrub and of Spanish Sparrows bathing in a puddle was also great for David to see.. 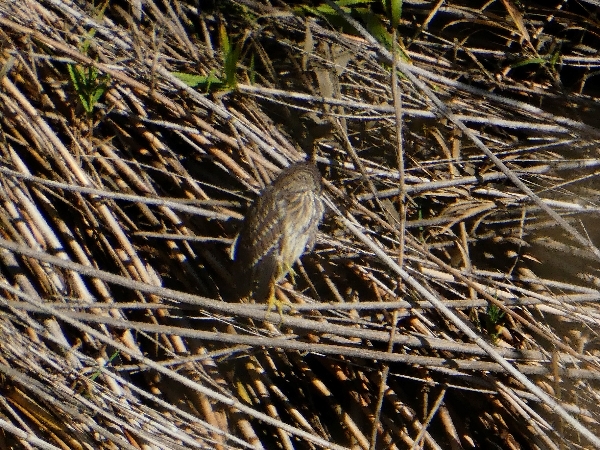 Driving along the central track our journey was punctuated by stops to look at Night Herons, Spanish Sparrows, Meadow Pipits, gulls, storks, cranes and harriers. Later we added Bonelli’s Eagle, Common Buzzard and Glossy Ibis to the day list.

Just before leaving La Janda we stopped to watch a Rice-Paddy-Plough, it was ploughing up a rice paddy!!!  Hundreds of birds were following it to snap up any morsels churned out behind the plough. Thousands of  American Red Crayfish, introduced and  ‘farm’ bred in the paddies for human consumption, but many are lost under the plough. This is where we found about 150 Glossy Ibis, a 1000+ White Storks, hundreds of Egrets and Gulls. 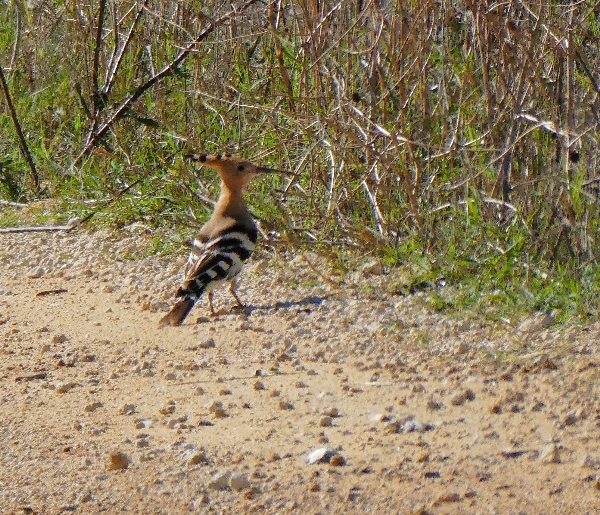 Eurasian Hoopoe on the central track at La Janda

A brief stop at a Golf Complex near Vejer de la Frontera produced sightings of BALD IBIS, we saw 8 of them on the roof of the 19th Hole. We also saw lots of White Wagtails but not Little Owl which is usually present. David saw Eurasian Siskin, Blue Tit & Great Tit, whilst I spotted an Iberian Green Woodpecker. 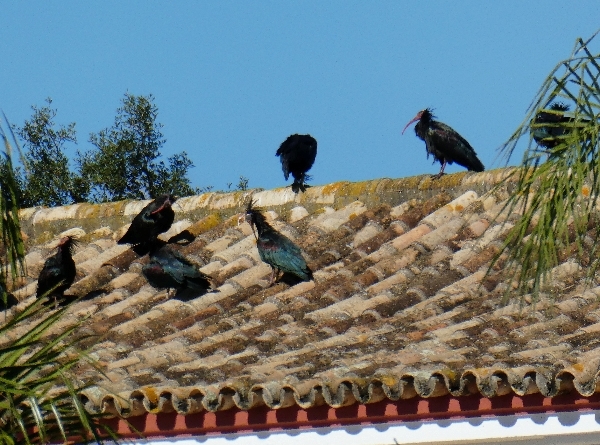 Bald Ibis on the roof of the Golf Complex

It took 30 minutes to drive to Laguna Medina from Vejer, we drove through some beautiful scenery but failed to add a new species.

It was a different story at Laguna Medina, it was covered by thousands of birds, we were like kiddies in a sweetie shop. Look at this, look at that, I’ve got this, and I’ve found that.  Our main target species was of course the White Headed Duck, we saw about 50, a bonus was a single male FERRUGINOUS DUCK, a single RED-KNOBBED COOT, a TUFTED DUCK (not easily seen in southern Spain), PURPLE SWAMPHEN and large numbers of other species. 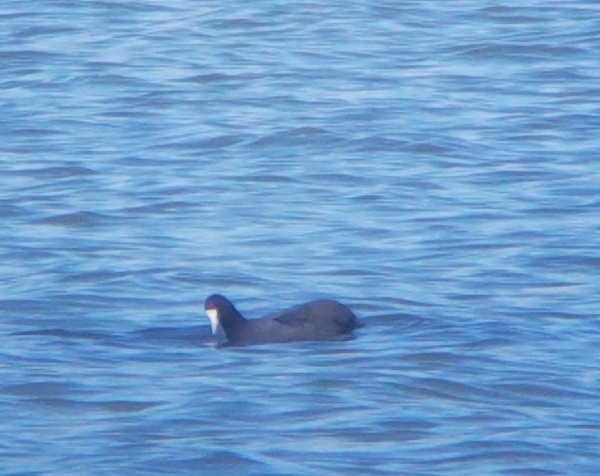 Record shot of the Red-knobbed Coot

A conservative estimate of Little Grebe was 200, Eurasian Coot, 1000, along with dozens of Northern Shoveler, Common Pochard, Gadwall, Teal, Mallard and also Black-necked and Great-crested Grebes. Twenty Five Greater Flamingos, a few Black-winged Stilts, Green Sandpiper and lots of Little Egrets made up the rest of our sightings. I saw a GOSHAWK fly low over the water but David could not get on it.

It was now 3pm and David had to be back on board ship by 5pm, so we decided to drive to one last venue before heading for Cadiz. Laguna Juncosa had produced many species during my last visit in September, it was almost dry then. Today it was full to the brim and absolutely birdless!!  We did find White Wagtail, Common Chiffchaff, Common Stonechat and our first Eurasian Magpie of the trip but nothing was on or near the water.

I dropped David off next to his ship at 4:45pm after crossing over the new bridge into Cadiz, wow what a piece of construction that is.

“The new bridge over The Cadiz bay crosses from the city of Cadiz to Puerto Real. The main bridge is a cable stayed deck with a 540 m main span, 200 m approach span and a vertical clearance for navigational purposes of 69 m. It is longer than any bridge of whatsoever type in Spain and than all but two of Europe’s cable-stayed bridges.” 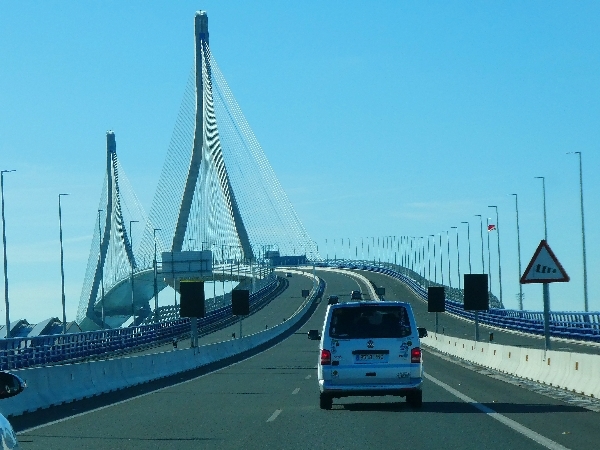 We had seen just under 100 species over the two days, David had seen 38 Lifers out of a possible 43 we looked for, he went on-board a happy man.