I couldn’t waste a superb day doing DIY so I made arrangements to go birding. I met up with John Hale, a good birding friend from Casares. John loves wader watching so we intended to visit Palmones Salt Marsh and estuary. We met at 8am and I drove John’s car down to the coast (he has a bad back), it was 8:25am when we arrived at Palmones. It was a perfect morning, the air was absolutely still, a clear blue sky and a turning tide. 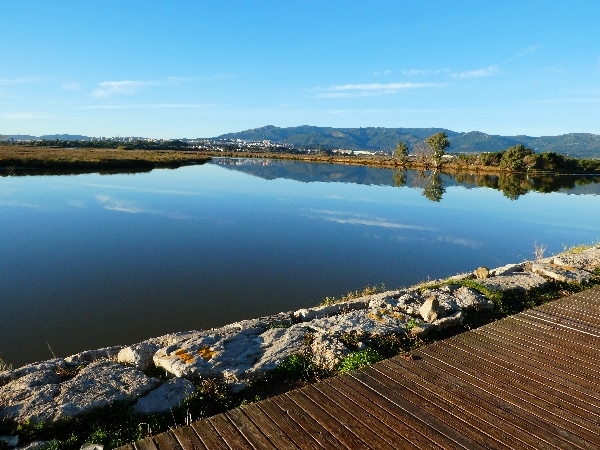 Looking inland from the start of the 'promenade' at Palmones 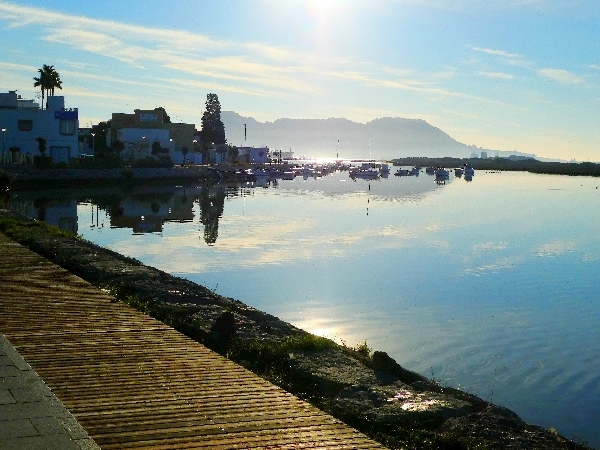 Looking down river to Algeciras Bay with Gibraltar in the background

We started about a kilometer from the river mouth and walked the entire length of the ‘promenade’ which runs all along the east bank of the Rio Palmones to the beach at Algeciras Bay. John sat on a seires of benches whilst I scoped the river and the marsh. Very quickly we found Common Redshank, Common Greenshank, Common Sandpiper, Whimbrel, Grey Heron and Little Egret. 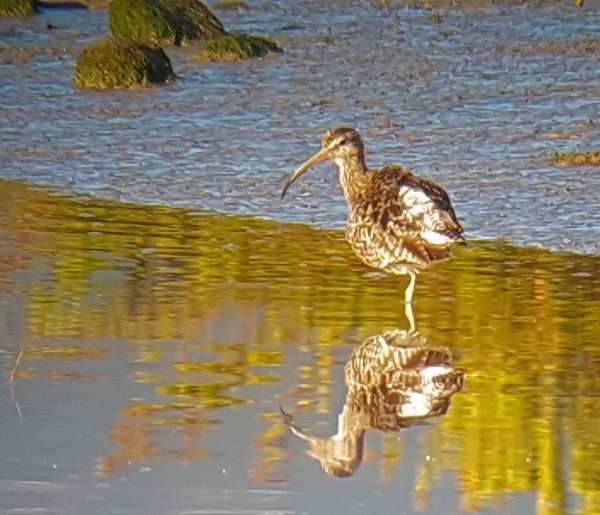 Further afield we located an Osprey in a tree, 13 Eurasian Spoonbills, several Great Cormorants, Grey Herons, Common Stonechat, Zitting Cisticola and to my great delight a BLUETHROAT. The Bluethroat showed a few times but I failed to get John to see it as it dropped out of sight every time he got his eye to the ‘scope. 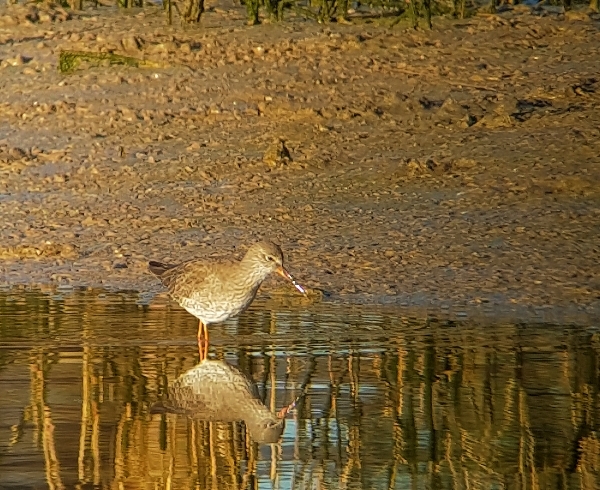 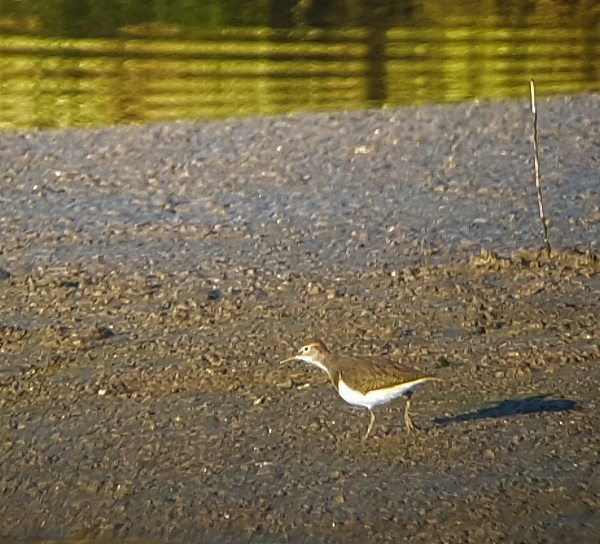 After a nice cup of coffee con tostado we set off for La Janda, a Sociable Plover (Lapwing), had been seen over the last couple of weeks and we hoped to see it today. It took 45 minutes to drive there, we noted Common Buzzard, Common Kestrel and Cattle Egret along the way, John called out a couple of Ravens near Facinas.

Once on the central track at La Janda we met a number of other birders looking for the Lapwing, our first species on the list were Common Crane, Corn Bunting, Eurasian Skylark, Northern Lapwing and dozens of both Griffon Vultures (overhead) and White Storks in the fields. 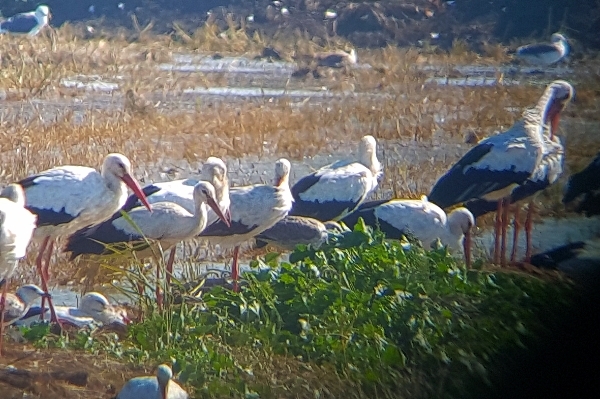 Then a large flock of Northern Lapwings took to the air and the SOCIABLE PLOVER was with them, you could easily pick it out, the upper wing had black tips, white primaries and brown secondaries, the body was also brown. The bird landed with the flock about two fields further along the track, so that is where we went to next.

Along the central track we noted Night Heron, Spanish Sparrow, Goldfinch, Linnet, Green Sandpiper and lots of Zitting Cisticolas and Common Stonechats. From our new position we located the Sociable Plover on the ground, but it was very distant, and we looked at it through heat-haze.

The stubble-field where the Plover was resting was a "Birder's Field of Dreams” because it held a huge number of birds: Northern Lapwing (100+), Sociable Lapwing (1), Greater Ringed Plover (100+), Green Sandpiper (6), Common Sandpiper (3), Common Greenshank (1), Common Snipe (20+), Golden Plover (50+), Eurasian Skylark (30+) and Marsh Harrier (5).  A ditch ran long the edge of the field with a dirt track next to it. On this track we saw Common Chaffinch, Crested Lark, Black Redstart, Common Stonechat and we just missed another Bluethroat according to a guy standing next to us. 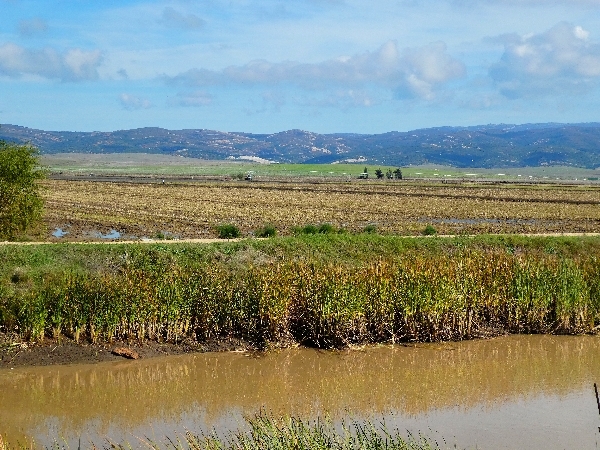 A farmer flushed the Lapwing flock, all of them went up, we had distant flight-views of the Sociable Lapwing before it flew off into the distance with the rest of the flock. We remained for another 15 minutes or so, but they never returned, during that time we saw Black-winged Kite, a couple of Lesser Kestrels and more Eurasian Spoonbills. Hundreds of White Storks took to the air and joined dozens of Griffon Vultures. A Booted Eagle was nice to see, also good numbers of Western Jackdaws were ever present. The power lines held very large, mixed flocks of both Spotless and Common Starlings and huge flocks of Spanish Sparrows fed in the uncropped rice fields. 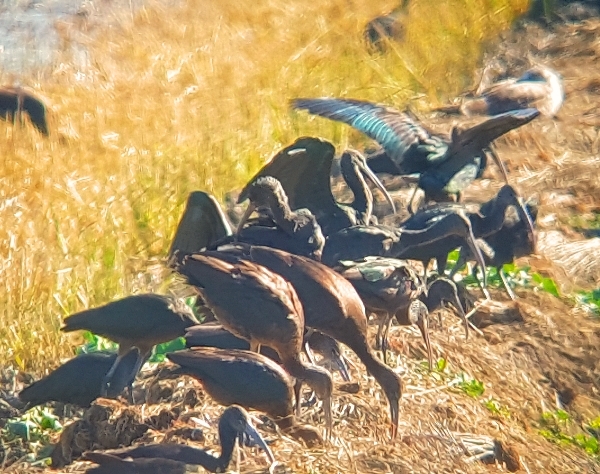 We negotiated the track very carefully as it had many water-filled potholes, we came out unscathed to the area where the rice fields were being harvested and ploughed, they were covered in all manner of birds. The number of White Storks must have been in the thousands, likewise Yellow-legged Gulls. We found another 43 Eurasian Spoonbills and several hundred Glossy Ibis, all these birds joined Cattle and Little Egrets in the hunt for Crayfish. The Crayfish were churned up by the plough, they had been introduced into the rice fields as a source of food, I have never seen them farmed, nevertheless, the birds love them!! Our new birds of our visit were Reed Buntings, we saw two of them just before we left.

We left La Janda at 4pm and drove back to Tarfia where we stopped for fuel and then for an ice-cream, yes it was still warm enough to eat an ice-cream. A white Magnum went down a treat whilst we look over to Africa from the Mirador de Estrecho, we noted our second Booted Eagle at this point. 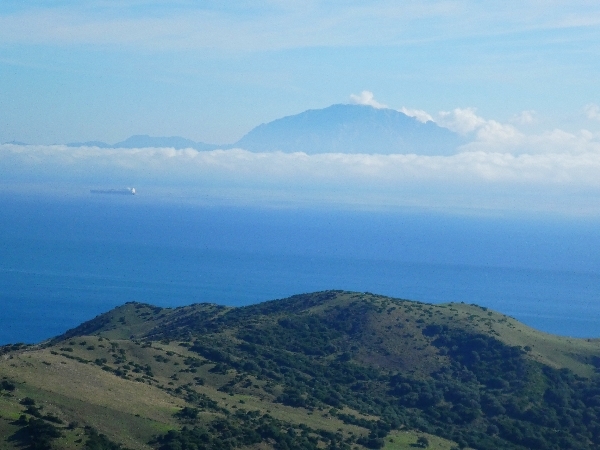 the view across to Morocco from the Mirador de Estrecho  where John and I ate our Magnums!!!

Our only other stop was at Torreguadiaro where John had seen a ‘ringed’ Osprey recently, we couldn’t find the bird but we added Northern Gannet to our day list. I left John around 5pm, it had been a wonderful day’s birding in the best possible weather.