WEATHER: a beautiful start to the day, clear blue sky and no wind, temp 14C. Cloudy later, with some thunder and light rain

The majority of the group are from the Bracknell and Wokingham RSPB Group and they all arrived in Sofia last night just after 6pm.  We transferred to a hotel in the suburbs of Sofia and saw very few birds, but around the hotel we saw Grey Wagtail, Collared Dove and a Green Woodpecker.

This morning as we loaded  up the bus  we added Jay and once again we saw Grey Wagtail and Collared Dove. Our drive up into the Vitoshi Mountains was completed in about forty minutes, the leading bus flushed a Roe Deer from the road and we also saw Red Squirrel and Wood Pigeon along the way.

We parked the buses at the top of the mountains in busy car park and very soon we were watching a number of great birds. Dancho called out a Willow Tit in a nearby willow tree, this was quickly followed by Coal Tit and Chaffinch. Then a male Ring Ouzel began to sing and perched in full view on the top of a pine tree, Crag Martins, House Martin and Pallid Swifts flew around the buildings and a Grey Wagtail sang from one of the rooves. 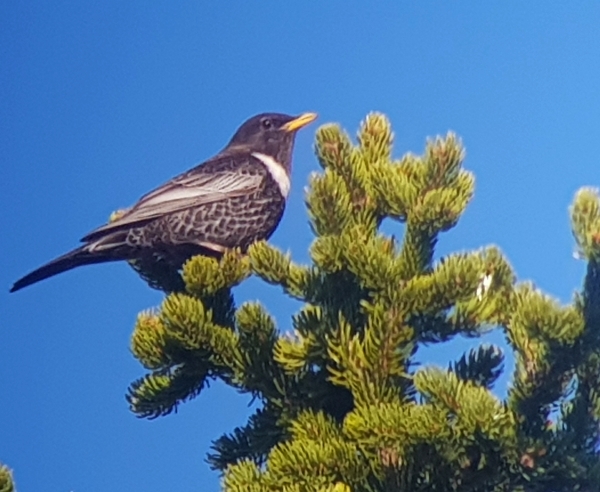 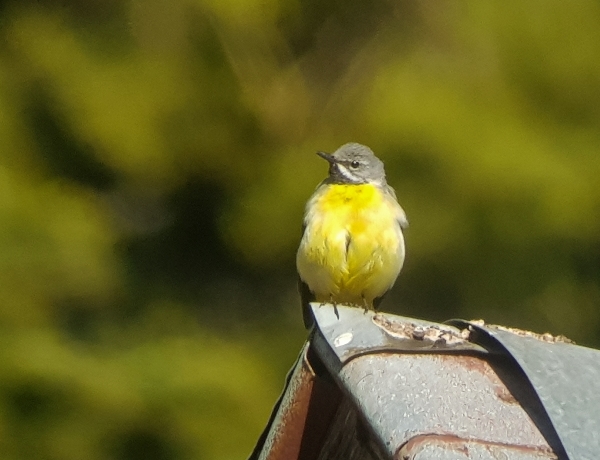 A Common Crossbill was seen next and a Common Kestrel perched nearby. We walked a hundred meters and scanned an open area where an obvious ski slope lay on the mountainside, plenty of snow was still around but only in patches. We saw our target bird from there, a Spotted Nutcracker, sat high up on distant pine tree and remained there for a while giving great vierws in the scope. 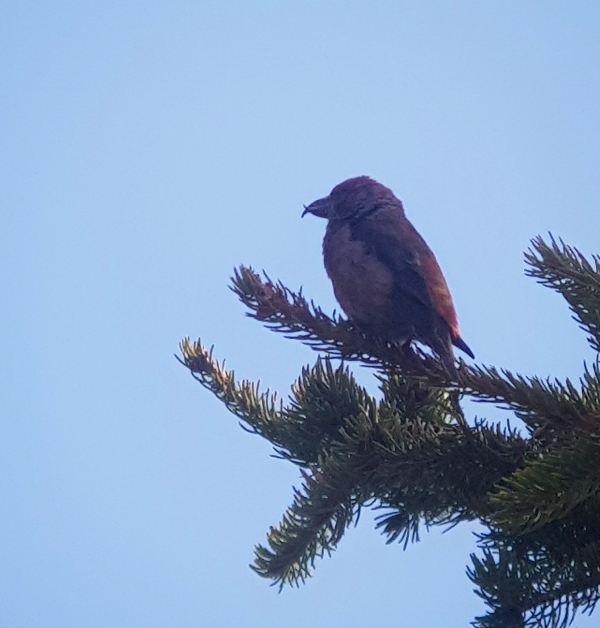 just a record shot, you can see its a Crossbill

Other birds appeared around us we didn’t have to go and look for them, Black Redstart, another pair of Ring Ouzels, Mistle Thrush, Dunnock, Blackbird and Song Thrush. We walked a little further and bumped into a Firecrest that also showed very well before we turned back and headed for the buses. 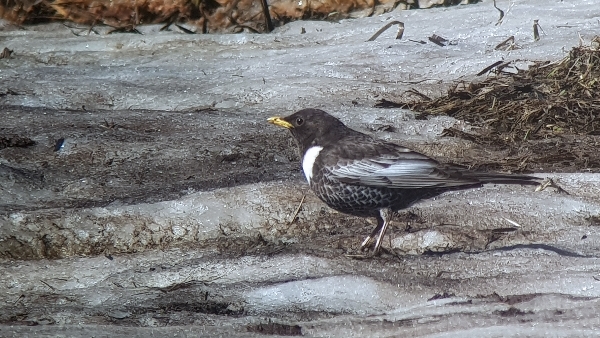 Ring Ouzel on 'dirty' ice, this is the subspecies 'alpestris' 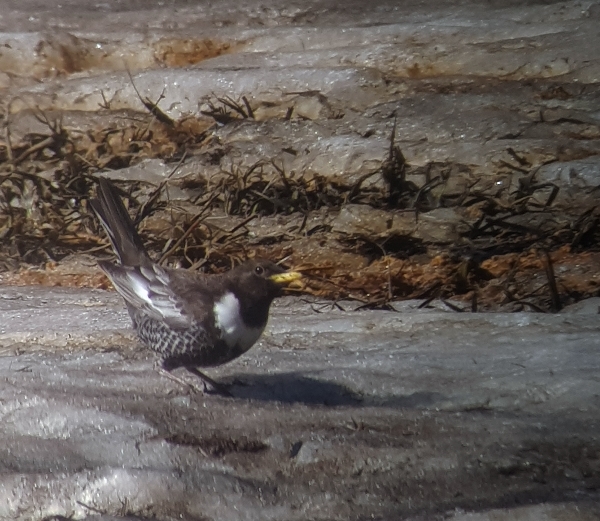 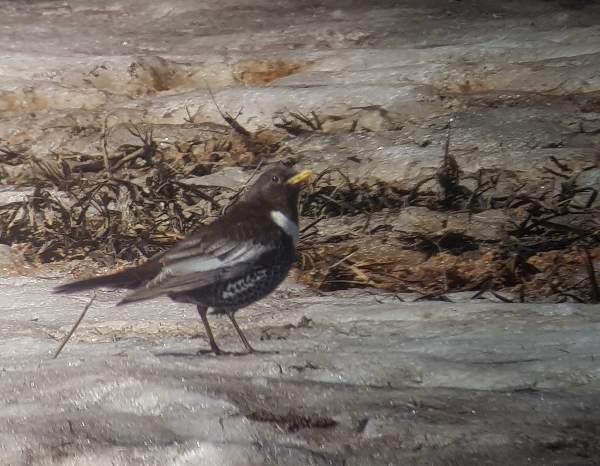 Back at the car park we saw a Common Buzzard and a red Common Crossbill, we had better views of the Crag Martins and Pallid Swifts too. 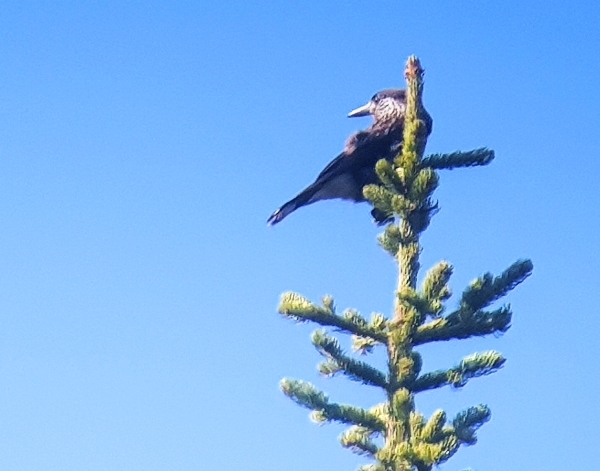 our target bird the Spotted Nutcracker 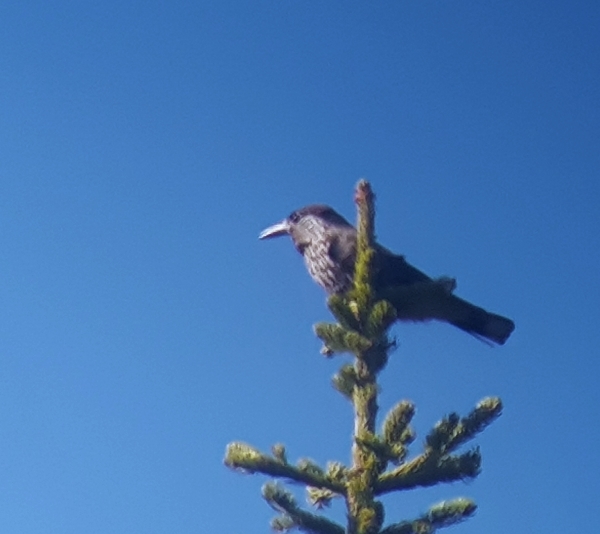 We drove back down the mountain to Sofia where we stopped to buy our picnic lunch supplies and then set off in earnest for the Western Rhodope Mountains. It took us 90 minutes before we got into the mountains, we stopped to eat our lunch at a roadside café before completing the rest of our journey to the Trigrad Gorge. 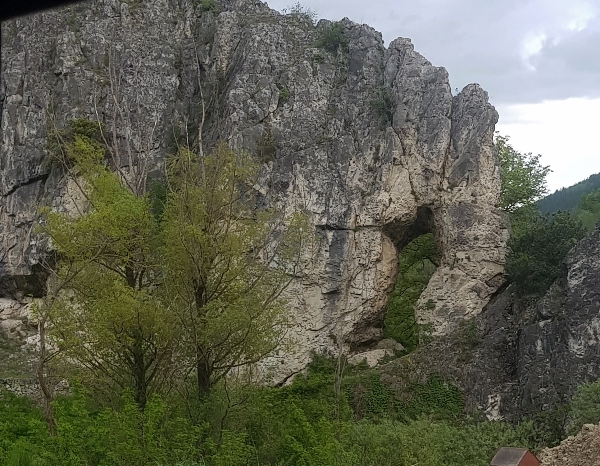 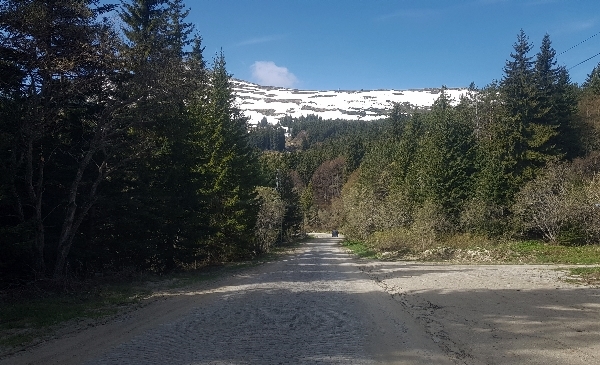 the view on the way back down the mountain, you can just see the lead vehicle in the distance driven by Dancho

It was about 2:30pm when we reached the Gorge and in particular a site where our most wanted bird, the Wallcreeper, had been seen yesterday! We staked the site and waited……… a Grey-headed Woodpecker called, a Grey Wagtail sang and Black Woodpecker called as it dashed across the gorge in full view. Still no Wallcreeper. 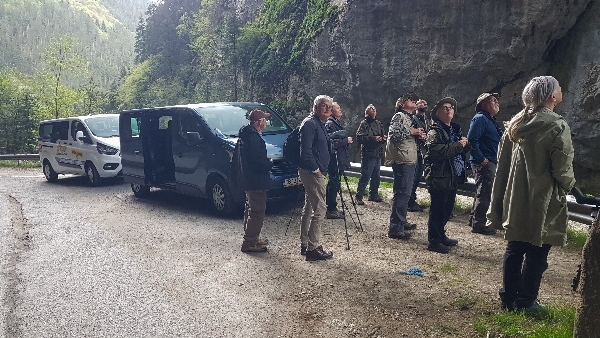 the Group at the Wallcreeper site

We watched House and Crag Martins, Alpine Swifts and a pair of Ravens flew up and down the gorge on numerous occasions, still no Wallcreeper! 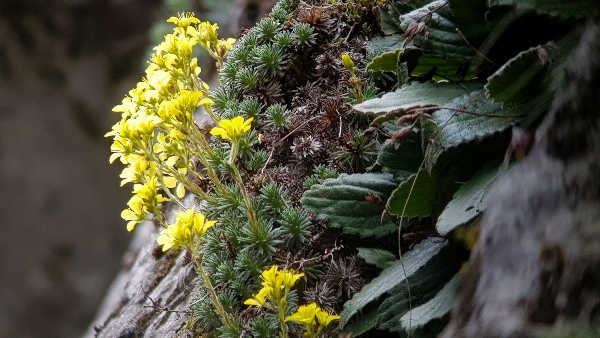 I took my minibus with a few of the group up the car park at the DEVIL’S MOUTH CAVE and scanned the rock faces from there. We saw the same species with the addition of a Firecrest, we heard another Black Woodpecker call, but still no Wallcreeper. 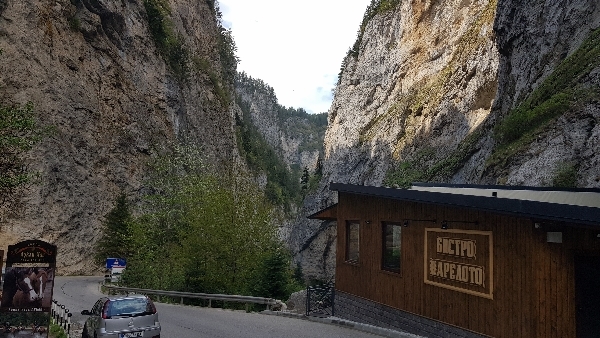 looking down the Trigrad Gorge from the Devil's Cave car park

We returned to rejoin the other group, they had seen the Black Woodpecker again and a Honey Buzzard but nobody had seen the Wallcreeper. We had waited over two hours, it was raining now and the troops were getting restless, so reluctantly we gave up on the Wallcreeper, it was our only chance. Our afternoon visit was forced upon us because the road is only open on a Sunday due to massive roadworks at the bottom of the valley, we cannot return tomorrow morning for an early visit and a second chance, boo-hoo!!!

We drove back down the gorge and turned off into a smaller gorge where the road twisted and turned as it wound its way along the gorge following the course of a river. We saw both Grey and White Wagtails but no Dippers. 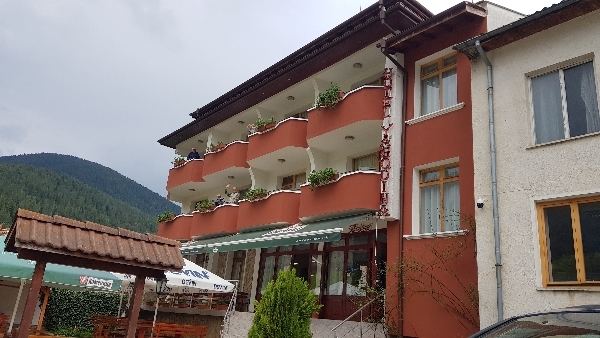 some of the group on their balconies at the Yagodina Hotel

At Yagodina we checked into our hotel after watching small groups of Red-rumped Swallows elegantly drifting around the buildings, such lovely birds. Dancho and I checked into a BnB down the road as the hotel was full, our land-lady told us that just a few days ago they had been watching Brown Bears from their terrace, how cool is that?