This was our best day so far, the weather was great, the birding superb and the scenery spectacular. We started with a pre-breakfast walk in the city park which was a couple of hundreds meters from the hotel. We heard an Olivaceous Warbler singing from some scrub along the way and saw Pallid Swifts and Red-rumped Swallows dashing about in the sky. Jackdaws, Common Starlings and Sparrows joined dozens of Collared Doves making noises as we crossed the main road and entered the park.

During past visits we had seen several Woodpeckers in the park and lots of other species too. Today we were disappointed with so few species being present, this was partly due to the ‘tidying’ up of the trees, the lawns and the flower beds. It was more like a well kept garden now and not a wildlife habitat.

There was plenty of Starlings, Collared Doves and Sparrows but we only saw Great Spotted Woodpecker, we had brief views of Lesser Spotted Woodpecker (although we did find a freshly made nest hole) and we heard Green Woodpecker in the distance. On the edge of the park a scrub area still existed where we heard Common Nightingale, Greenfinch and a Hawfinch flew over us. 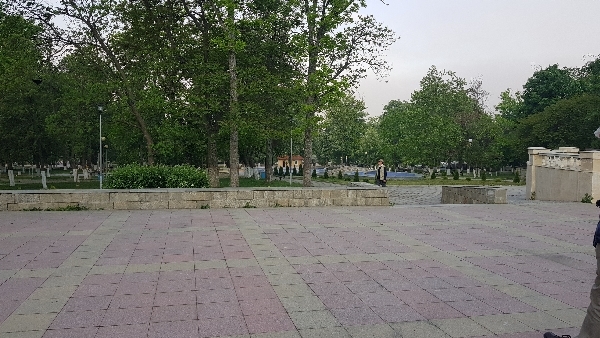 In the park at Krumovgrad

Breakfast was ready for us at 7:30am and by 8:15 we were all packed onto the buses and on our way to our first birding site which was a valley a few kilometers from the town. The Krumovitsa river flows through the valley which is surrounded by rich fields of scrub, some cultivated fields, pastures, rocky hillsides and some mature riparian woodland. 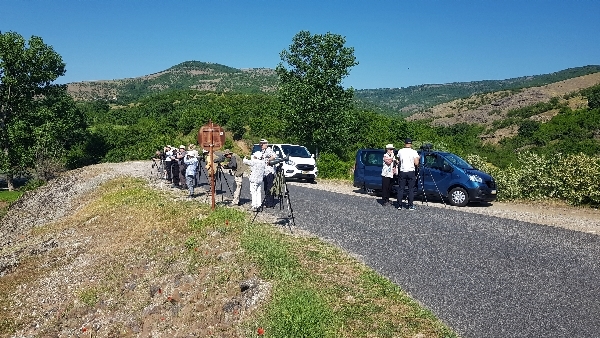 birding in the valley

I love this valley, it is always full of birds and today was no exception. We stopped after just a few hundred meters to look at Turtle Doves on a wire we ended up staying for nearly an hour because new species kept appearing. A Barred Warbler was singing and performing flight displays as it moved from song-post to song-post, we had great views of it in the end. We saw Red-backed Shrikes, Common Whitethroat, we could hear Golden Oriole, Common Cuckoo, Hoopoe, Cirl Bunting and Common Nightingales sang from every directions. 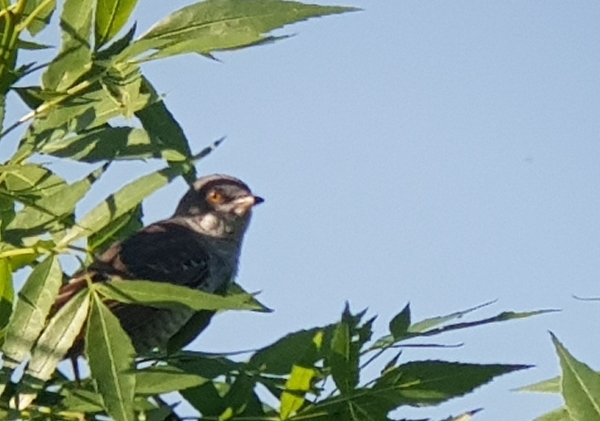 The star bird of the morning was the European Roller, we watched two males performing their ‘rolling’ flight display as a female looked on, it was beautiful to watch in the perfect light, the colours were just amazing.

We saw Black Storks overhead and White Storks on nests, Griffon Vultures flew over us as did Eurasian Sparrowhawk, Common Buzzard, Jackdaws and Swifts, Swallows and Martins. More stops along the quiet lane produced more species, Black-headed Buntings, Corn Buntings, Woodchat and lesser Grey Shrikes, the latter performing its flight display by flying up high and drifting back down like a pipit, with wings and tail spread whilst calling. 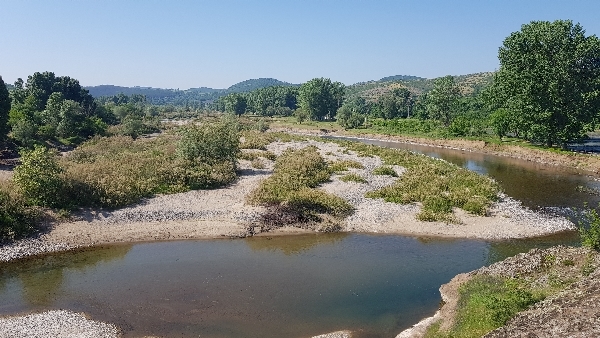 a view from the bridge over the river Krumovitsa

We had great views of Common Nightingale and more shrikes and buntings before we stopped on a bridge over the river. From ther bridge we watched Olivaceous Warblers, Common Kingfisher, Little Ringed Plover and two male Common Cuckoos were chasing one another around the trees. A Hobby flew over us a couple times and more Griffon Vultures and Black Storks drifted over. 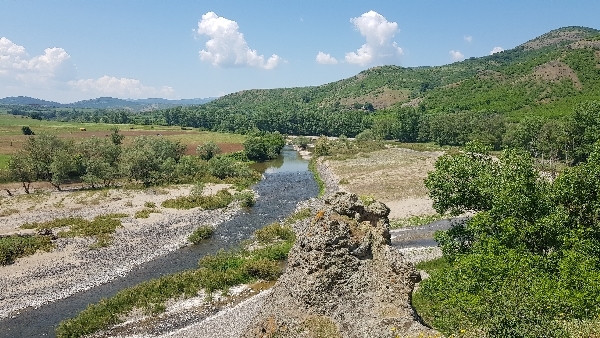 Further along the valley Dancho picked out a Chukar standing on a rock face, we added Woodchat Shrike, Lesser Whitethroat, Blackcap, Green Woodpecker, Long-tailed Tit, Eastern Black-eared Wheatear and an unusual sighting was that of a Black Woodpecker.

From a high rocky outcrop we had panoramic views of a section of the river and the outlying fields, we could also see a cliff face where the weather had eroded some deep ledges and caves. A Black Storks nest was visible from there, we saw more Vultures, Buzzards, a Hobby and a pair of Common Kestrels. Black-eared Wheatear sat on the rocks, we found a second Chukar and a female Ortolan Bunting was a nice surprise. 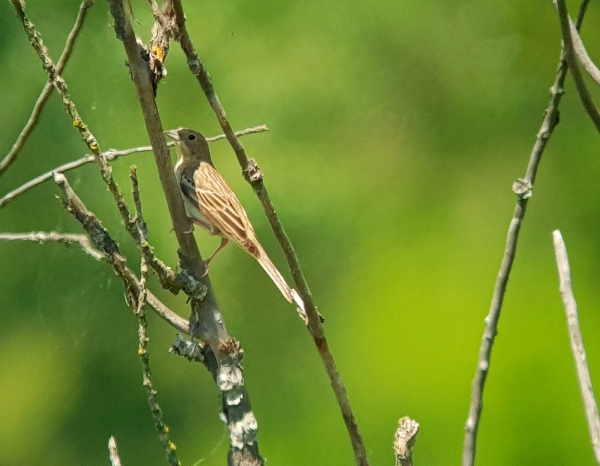 Many butterflies were on the wing, we found Eastern Knapweed, Lesser Spotted and Queen of Spain Fritillaries, Green Hairstreak, lots of ‘Blues’, Clouded Yellows, Green-veined White, painted Lady and Small Copper., We had to drag ourselves away at lunchtime and drive into town, along the way the lead bus drove over some wire and got a slow puncture, luckily the first garage we came too on the edge of town had a tyre repair centre. Whilst the tyre was being ‘plugged’ I drove into town to buy picnic supplies for lunch, we all then set off eastward and stopped along the way to eat our picnic in a sheltered site. 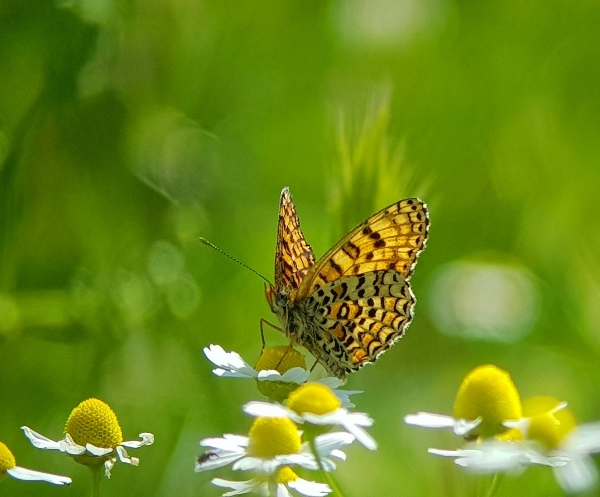 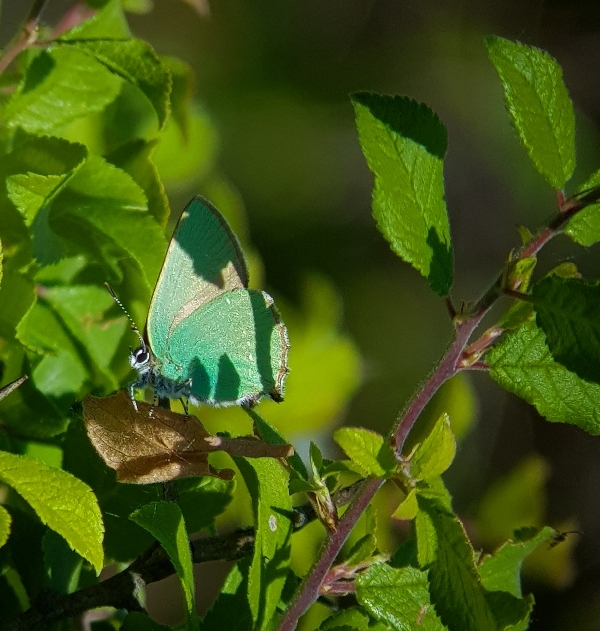 It was late afternoon when we arrived at Mardzhrovo, our first stop was to visit the visitor’s centre for coffee and ice-cream, it was now very warm, 27C. We saw a Booted Eagle as Dancho then led us back to the buses for a drive into Town. The city park was our destination and Scops Owl was our target species.  A quick search amongst the trees revealed two or three owls, we had one in particular which showed very well in the scope. Dancho also showed us a superb Orchid, a rare species called Reinhold’s Orchid. 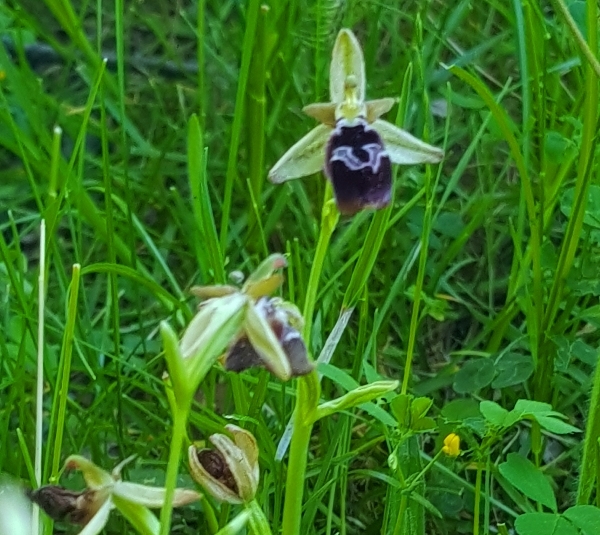 Our last birding of the day was spent in the massive crater at Mardzhrovo, we stopped by the north face and scoped the impressive caldera walls of the crater. There was high cliffs with pinnacles, clefts, ledges and flat areas. Birds were everywhere, we soon got our target species in the bag. Blue Rock Thrush, Rock Bunting, Ortolan Bunting (a male singing), both Griffon and Egyptian Vultures, Black Storks and a Peregrine Falcon. We saw another dark morph Booted eagle as we left. 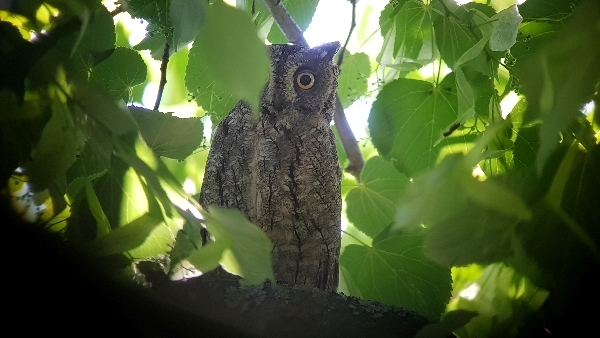 Scops Owl, peeking from behind a leaf

Our hotel was a 40 minute drive away, we arrive around 6:15, an hour later we were enjoying a lovely cold beer on the terrace, it was a lovely temperature, we had beautiful surroundings, what more could you want? Dinner!