It was another transfer day today, we moved from Burgas to the north-east coastline at Krapets, our journey took us through Varna, we travelled about 200km. But we made several stops along the way and we also took our usual early pre-breakfast walk.

At 6:30am we drove the short distance to re-visit the Lake near the Pumping Station to look for more waders, it was a lovley clear morning with no wind and the turn out of the group was still impressively high. We drove along a track to the pumping house and got out, we could view a pool with the sun behind us and saw quite a few species including Eurasian Spoonbill, Black-tailed Godwit, Garganey and our first Eurasian Wigeon of the trip. A god number of hirundines flew over us and we saw Whiskered Tern as well as all of the common species of terns. 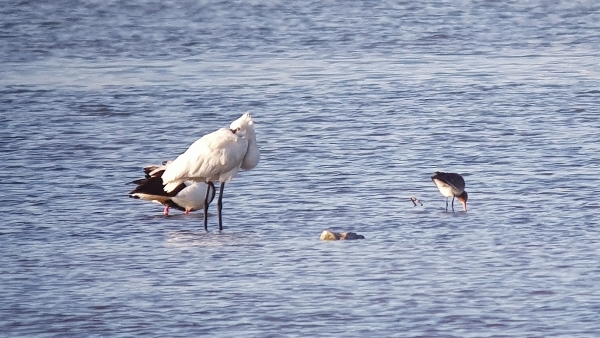 In the bay we found a small groups of Little Stints and Curlew Sandpipers but not Kentish Plover as we expected. It was a lovely morning and everyone enjoyed getting up to expereince it.

Our long journey began, we planned to make plenty of stops, the first of which was in an unexpected location, Dancho turned the leading bus onto a farm track and he drove us a couple of kilometers through a maze of cultivated fields before we stopped on hillside. We had views of a vast area and in the distance a marshy area was surrounded by rough ground. Within minutes we saw our target bird the Collared Pratincole, over the next 30 minutes we had close views of several of these enigmatic species. We also saw a distant Roller, a Hobby, some Skylarks and the usual Corn Buntings. 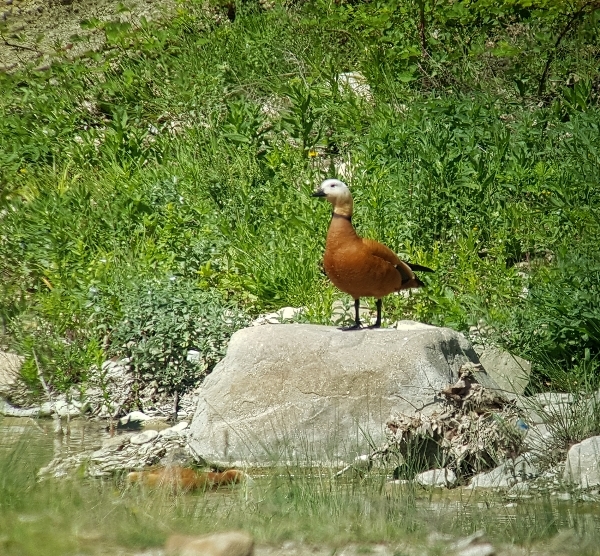 Our next stop was at the base of the Dyulino Pass through the Central Balkan Mountains. It was warming up and it felt quite hot in ouir sheltered spot. A pair of Hoopoes were seen visitng a hole in river bank, we saw Woodchat Shrike, Golden Oriole, Little Ringed Plover and a pair of Ruddy Shelduck. In the distance we saw Lesser Spotted Eagle, a Raven flew over us and plenty of Nightingales were singing. 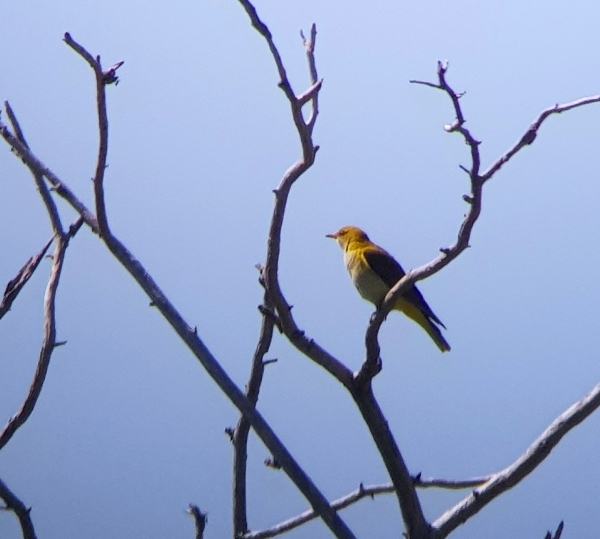 WE made a second stop at the top of the pass to look for Yellowhammers which failed to show up. We did find a nice selection of species though, such as Woodlark, Black-headed Yellow Wagtail, Skylark, Corn Bunting, a pair of Hawfinch flew over and we saw a Honey Buzzard high up in the sky. 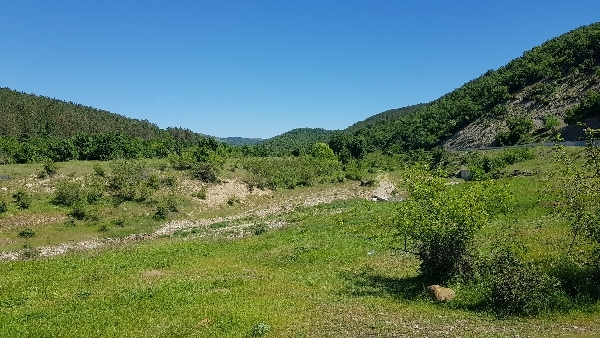 The northern slopes of the Centrasl Balkan Mountains are covered by vast oak woodland we drove for many kilometers through this lovely landscape and although the road was in very poor condition it was a lovely drive. We eventually came out onto a main road which was in a much better condition. Before lunch we made two more stops, both of them were in the oak woodland.

The first stop was to look for Middle Spotted Woodpecker and after spending time catching brief flight views of a pair of them we evntually found an active nest hole, It was great to see this colourful woodpecker so well, the group really enjoyed that experience. We also listed Blackcap, Short-toed Treecreeper, Chaffinch, Great Tit and Spainish Sparrow. 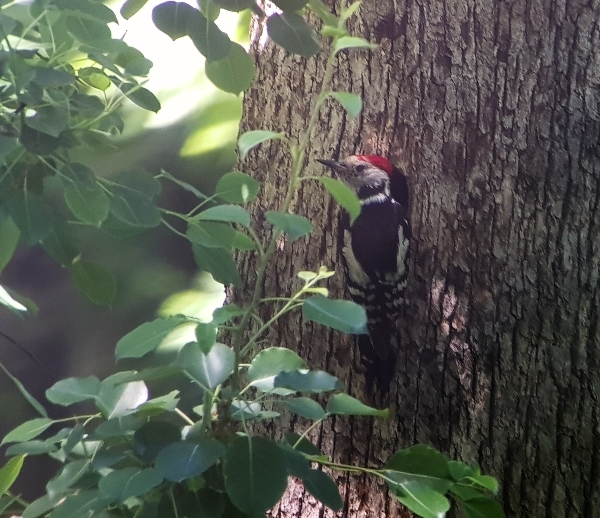 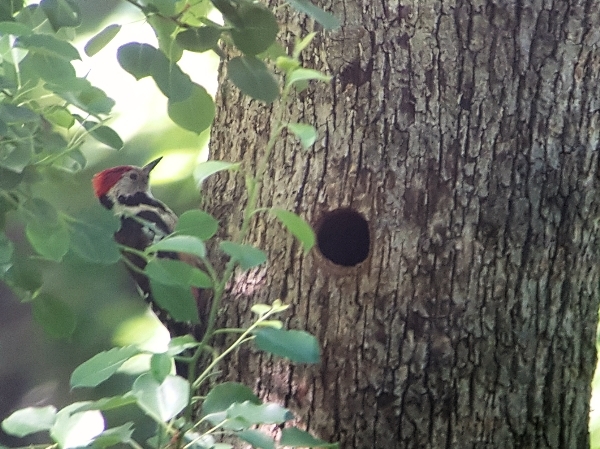 Our second stop was to look for Semi-collared Flycatcher, we drove into the woods at a second location and parked the bus. Dancho had heard a singing flycatcher as we drove into the woods and so, after parking the buses, we walked backed to that area. Within a minute Dancho located the bird and got us all onto it. It was fantastic to see this species and the group loved it. The bird performed very well, moving around but always returning to its favourite singing post. 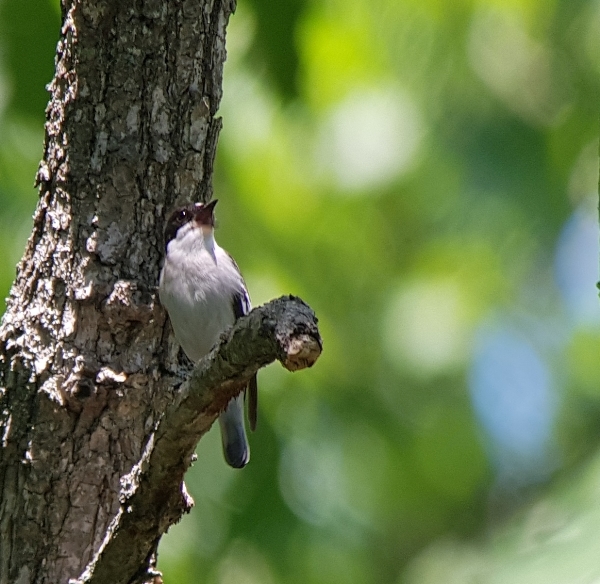 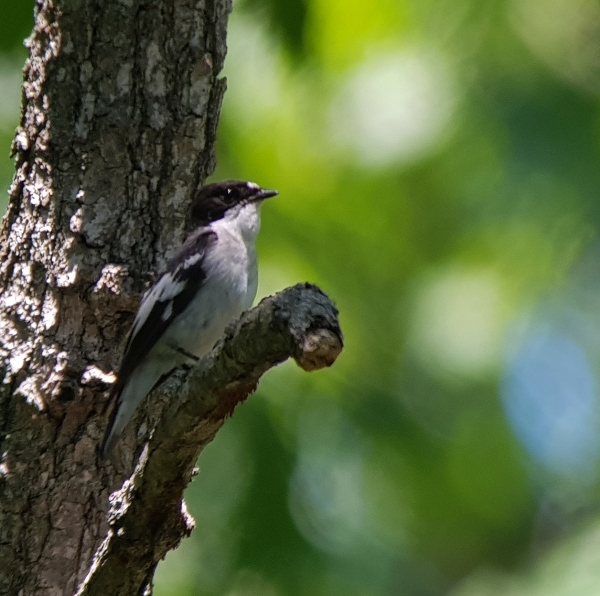 It was quite late for lunch by now, so we drove down into a town and found a small roadside restaurant where we ate lunch around 2pm!!

We then drove up through Varna and into the northern coastal area of the Black Sea, we made one more stop which was to look for Eagle Owl at Belite Skali. We scanned some white cliffs for the roosting bird without luck, there is now quite a lot vegetation at this regular Eagle Owl site and the birds have plenty of places to hide away in. We did enjoy watching a colony of Bee-eaters and we heard Barred Warbler, Common Whitethroat and Nightingales.

It was almost 6pm when we reached our Hotel in Krapets, it is situated very close the the shore and we all had sea-views from our rooms. A nice cold beer was enjoyed out on the terrace of the restaurant before esating dinner at 8pm.