WEATHER: a bright start with some cloud, then dull and overcast with some rain. Clear later

It was well worth the effort of getting out of bed before 5am to see the endemic Yellow-eared Parrot, they performed perfectly. We had a quick cuppa before we boarded our two jeeps for the 19km uphill drive to the Parrot Reserve. We timed it to perfection because just after we all clambered out of the vehicles we heard the parrots calling as they left their roost. First a pair, then a group of three and then more. We were so lucky when a small group of them landed in a tree very close to us, just marvellous and right on cue. 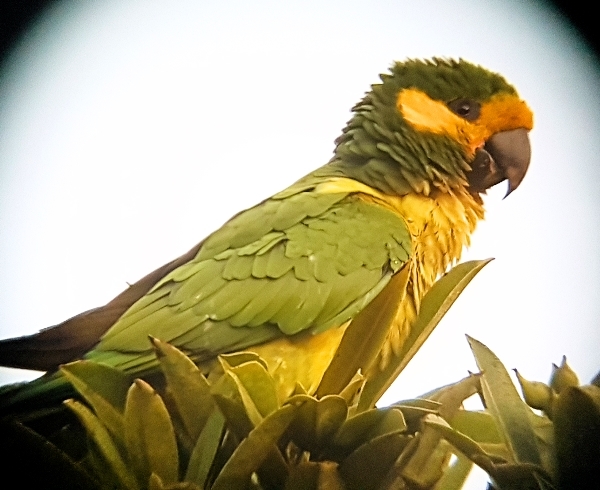 Before long long we had seen quite a few of them, one group of 13 was nice to see. In addition to the Parrots we saw several Streak-throated Bush-Tyrants and a few common birds. A little further along the track we stopped to watch a Powerful Woodpecker which another group of birders had found, we also saw our first Mountain Elaenia and we had good views of a Smoke-colored Pewee and a Black-billed Mountain-Toucan. 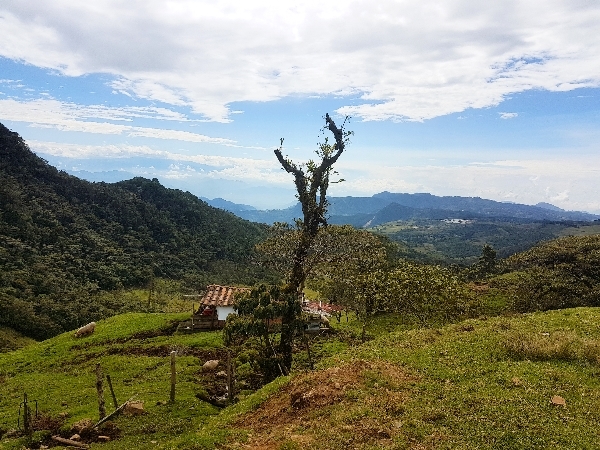 Our next site was another Antiptta feeding station found about 30 minutes further along the track. It was a steep climb off the track onto a football pitch of all things!! In an open area beyond the pitch we saw the beautiful Rufous-crowned Tody-Flycatcher and a couple of other birds, it began to rain at that point, but it didn’t last long. We continued onto the forest track which again was very steep, both up and down until we reached the Antipitta feeding station. A Chestnut-naped Antpitta showed extremely well and even took worm offerings from your hand. 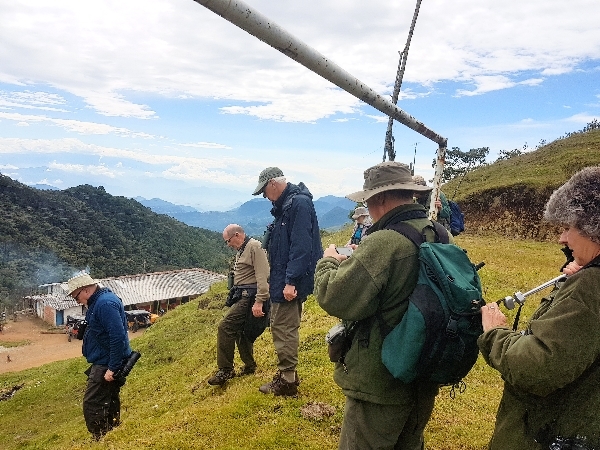 The group clambering down to the track through the goal-posts of the football pitch, you can see the cafe and our vehicles below 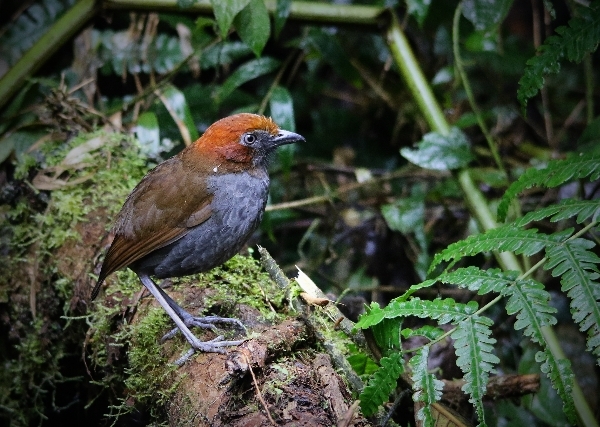 After returning to the track we had a quick coffee at a roadside café before turning around and heading back down towards Jardin Town. Over the next few hours we walked several kilometers downhill with the jeeps following us. Birds were few and far between as has been the pattern throughout this tour. We did add a small nnumber of new species to the list but not that many, birds of note included: Yellow-bellied chat-Tyrant, Green-and-Black and Barred Fruiteaters, Black-billed Peppershrike, Streak-necked and Cinnamon Flycatchers, Grey-headed Bush-Tanager, Citrine Warbler, Grass-green, Purplish-mantled, Blue-and-black Tanagers and Mountain Cacique. 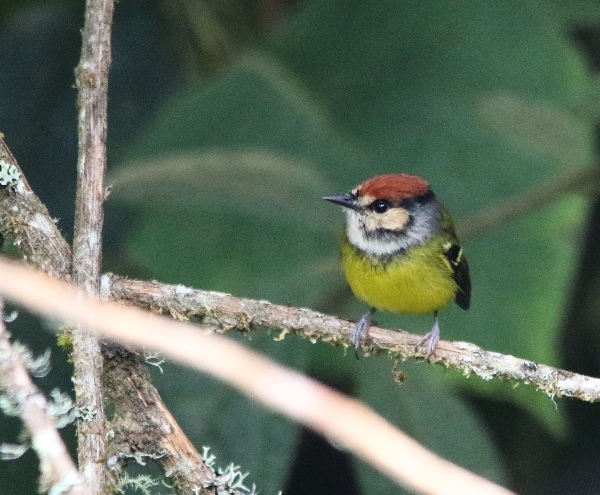 Lunch arrived by courier, a delicious dish of chicken,rice, salad etc wrapped in banana leaves which we ate sitting around or on the vehicles. Further birding along the track after lunch produced the sought-after Red-bellied Grackle, also Souhern Emerald Toucanet and Russet-backed Oropendula. 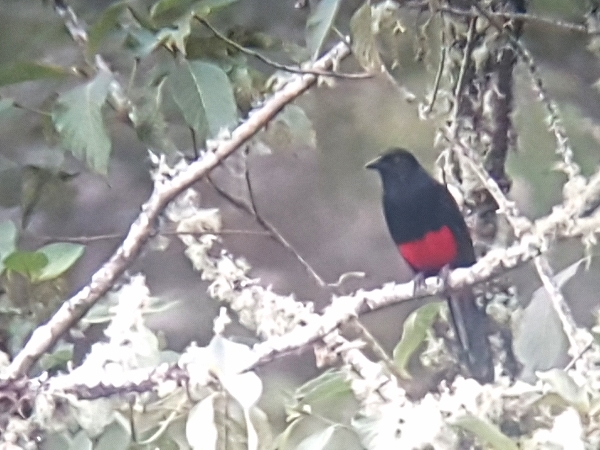 A record shot of the Red-bellied Grackle - this was taken at a distance of 1/4 mile using a Swarovski ATX 95  Telescope at 70 mag. with my Samsung S7 hand held to the scope!

We left the track around 3pm in order to drive into Jardin to visit an Andean Cock-of-the-Rock lek, the lek occurs in an unbelieavable setting in someone's garden. The garden has been developed to cater for visitors with viewing platforms, boardwalks and feeders. We had incredible views of at least 10 male Cock-of-the-Rocks all performing their mating displays and chasing one another around, we never saw a single female. 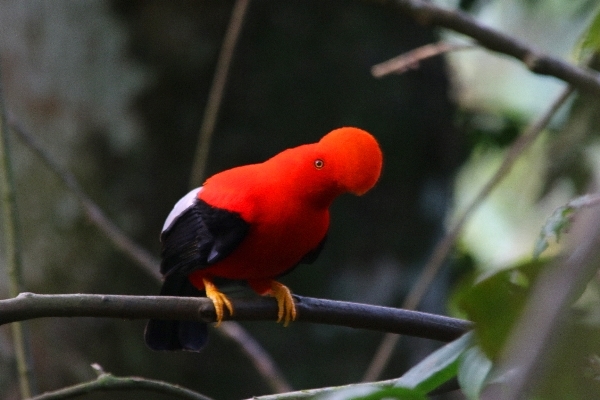 Other birds seen in the garden, or at least overhead were Chestnut-collared Swifts, Lesser Swallowtail Swifts and a single Lineated Woodpecker. We left the garden around 5pm and drove into town to a wonderful hotel just a hundred meters from the fabulous main plaza of Jardin.

We were lucky enough to visit the plaza for a drink before we ate a delicious dinner in a tiny boutique restaurant along a side street. The plaza was packed with people, ther must have been a couple of thousand people sitting at tables eating, drinking, singing, the atmosphere was amazing. It was a fabulous experience and a lovely friendly ambiance throughout we just soaked it all up, and a couple of beers.