We had a terrific start to our birding day with some outstanding birding in a car park! We left the hotel at 5:30am and drove out of town for an hour or so before stopping for breakfast, another 40 minute drive got us to the Laguna Tabacal. 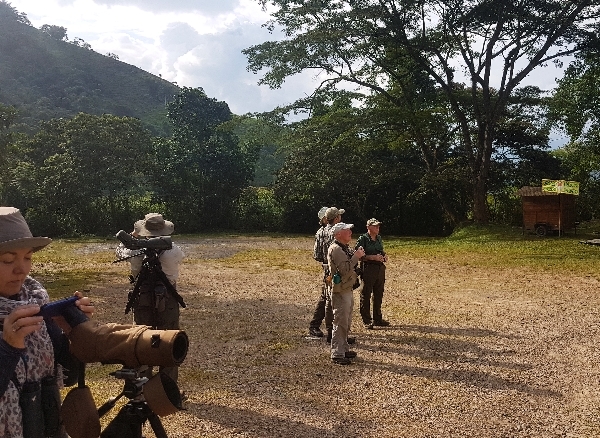 In the car park at Laguna Tabacal

This local municipal park includes the laguna, which is a crater lake, and the surrounding secondary forest. The birding was fantastic, it was so good that it took us 2 ½ to get out of the car park, birds were everywhere. Woodpeckers, Woodcreepers, Hummers, Tanagers, Antshrikes, Wrens, Becards, Flycatchers, what seemed to be an endless number of new birds kept popping up, it was quite mind-blowing at times. These were not mixed flocks passing through birds were all around us all the time. Even the sky had birds in it all the time, Black Vultures, Cattle Egrets, Bare-faced Ibis and a distant Black Hawk-Eagle was seen. 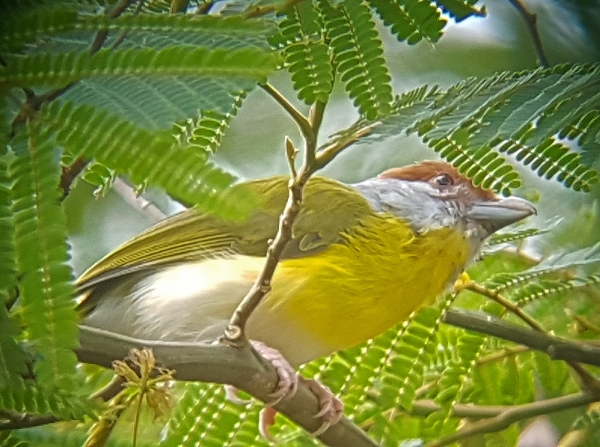 After a quick cuppa in the car park café we went for a walk along the road just outside the park, we had several chances to see one of the sought-after endemics, the Velvet-fronted Euphonia but we only had fleeting views of it. Speckle-breasted Wren was nice, Striped Manakin was seen by just a couple of us and we all enjoyed Rufous-naped Greenlet, Golden-faced Tyrannulet, Grey-headed Tanager and many more species.

A few North American Warblers also appeared, We saw Bay-breasted, Canada and Blackburnian as well as the resident Rufous-capped Warbler. 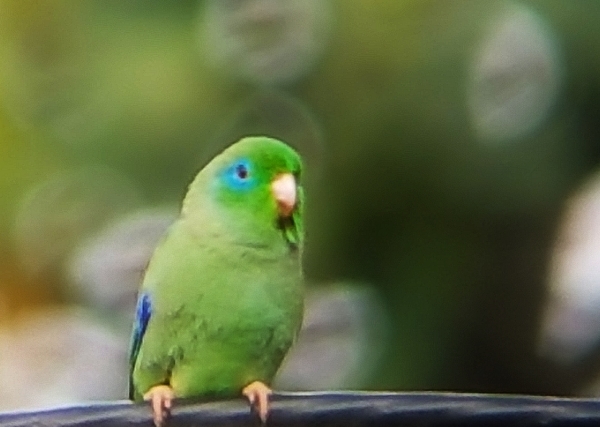 The laguna itself was quite productive even though quite a few ‘tourists’ were walking arounds the shoreline. Half a dozen Bare-faced Ibis were joined by Neotropic Cormorants, Green Kingfisher, Least Grebes, a Striated Heron sat in the bushes and many Southern Rough-winged Swallows skimmed the surface of the water. The star bird was an amazing White-throated Crake, this bird is usually very shy and hard to see but not here. A pair of them came out of a small patch of reeds and started feeding close by, they seemed totally unpeturbed by our presence, clickety click went the cameras!! 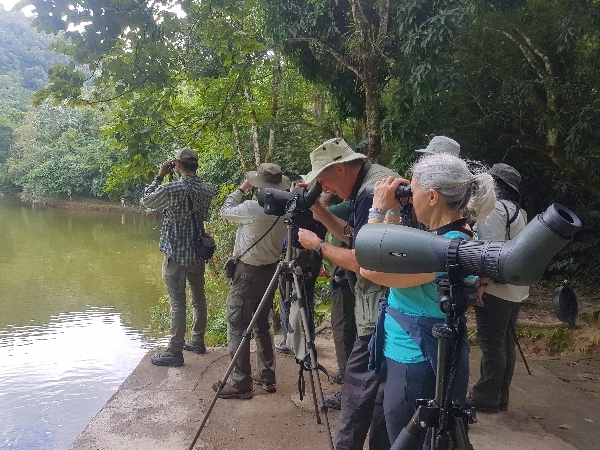 The group watching the Least Grebes 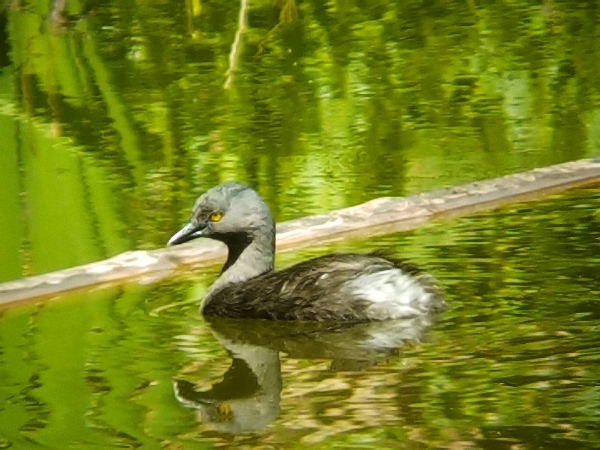 We drove back into the town of La Vega for our lunch, which lasted a nice relaxing hour, then we drove for 30 minutes to our next birding location, the Enchanted Garden. This is a private garden with an entrance fee  and has over 20 Hummer feeders and a large bird table covered in rice. It was another amazing experience, a huge number of hummers were present all time and the number of Bananaquits was unreal. Other species included Shimy Cowbirds, Thick-billed Euphonia, Ruddy Ground Doves and Saffron Finches by the dozen. 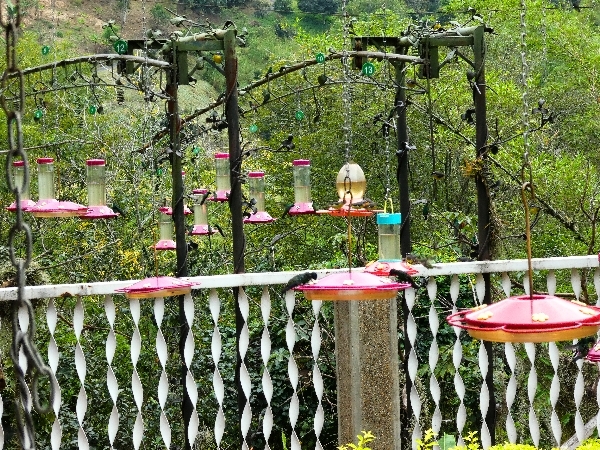 Some of the Hummer feeders at Jardin Encantado

But it was hummers we were there for, the Indigo-capped Hummingbird was very common, as well as Black-throated Mango, Rufous-tailed Hummingbird, White-vented Plumeleteer, we also saw both White-bellied & Gorgeted Woodstars, Brown & Sparkling Violetears and the star of the show Ruby-topaz Hummingbird, what a stunning humming that was. 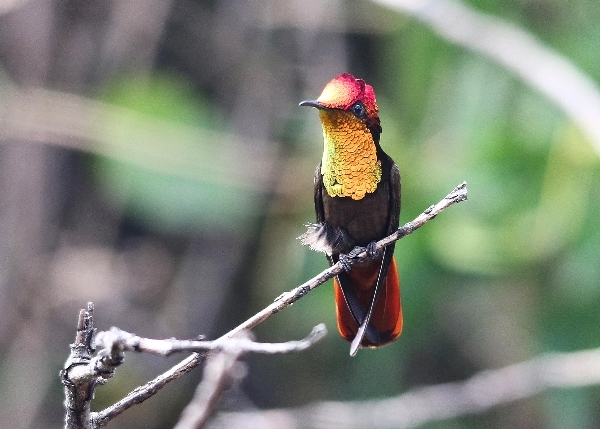 two pictures of the Ruby-topaz, the upper picture taken by Mike Ambler 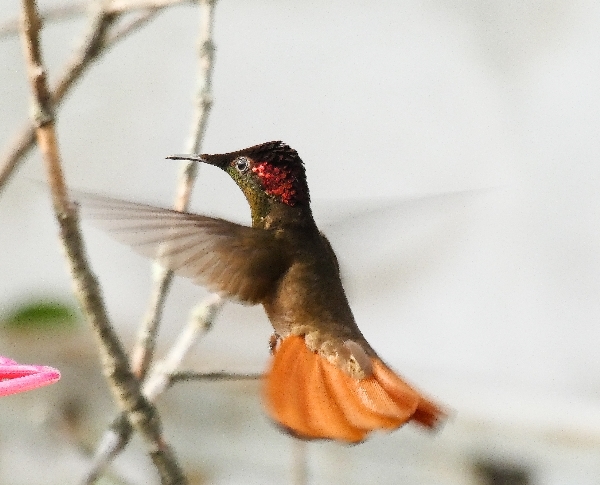 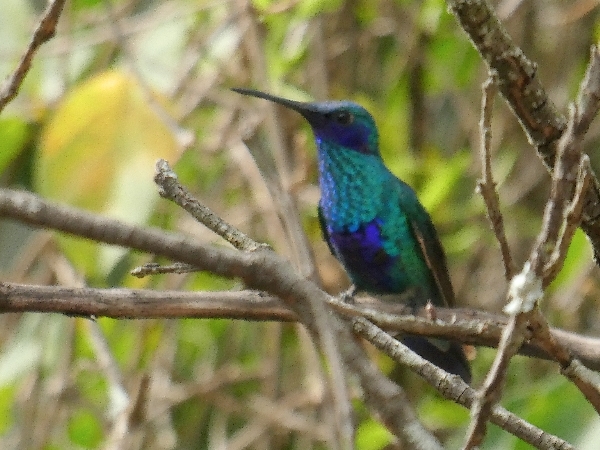 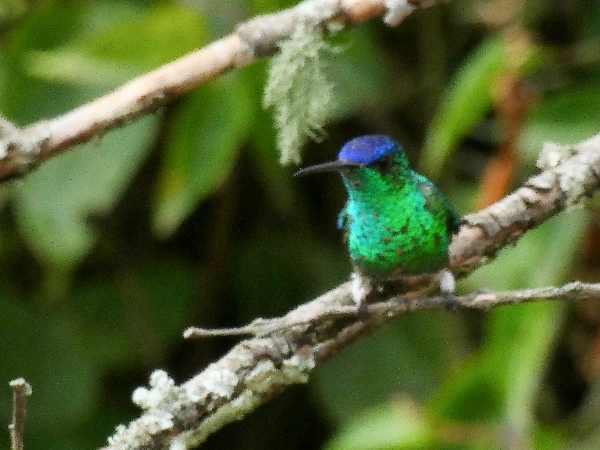 We stayed for 2 hours just soaking up the magical ambience of the place before heading back to noisy, crowded city.