What a great big beautiful country Colombia is! It is fabulous here! I met John and Gill at Heathrow for an overnight flight on Friday, all went tickety-boo, we arrived 4am local time at Bogota and were transfered to Medellin by 7am. It was dark when left Bogota but light as we took off for Medellin which is a 30 minute flight. 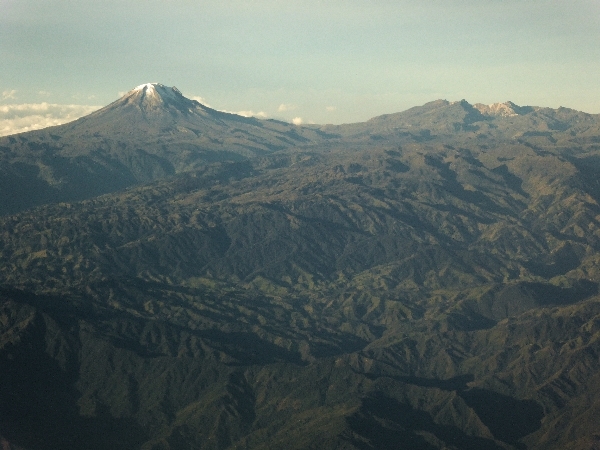 It was a clear morning the mountains looked spectacular all around the vast plateau that Bogota sits on, however, all that changed as we touched down in Medellin because it was very dull, overcast and raining.

We met Penny and Rick our other two companions outside the terminal and together with the bus, driver and guide we were all set to go. We noted Southern Rough-winged Swallow and Eared Dove at the airport and Southern Lapwing and Black Phoebe along the road.

After a quick breakfast stop we set off in an easterly direction to a birding site in the foothills about an hour out of Medellin. We stopped in area called Pinajuela where a track decended into lush valley. The rain stopped, the sky cleared and we had a wonderful birding walk.  We had scrub, cultivated fields, clumps of woodland and tall mature trees to search for our first birds. 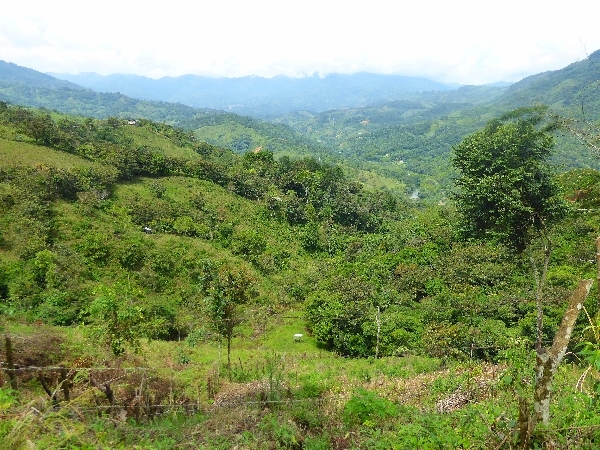 The lush valley that we walked down into

It was typically manic, our first birding in a new country with a great guide who was finding birds here there and everywhere. A lot of them we were familiar with because of experiences in Costa Rica and Panama, but Colombia has around 90 endemics and this trip was put together so we could look for them. 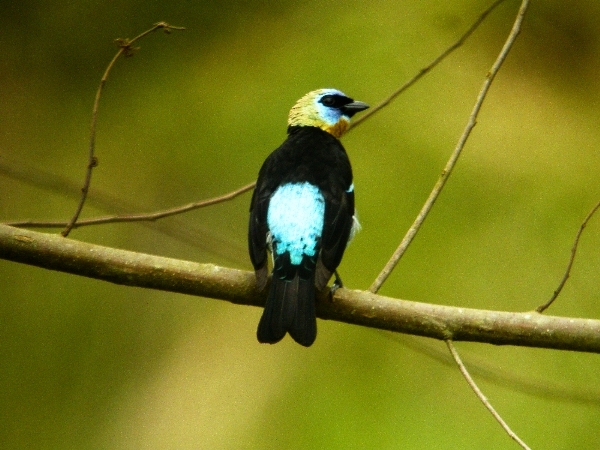 We started with Yellow-bellied Elaenia, Kiskadee, Steely-vented and Rufous-tailed Hummingbirds, Roadside Hawk, Black and Turkey Vultures,  a Black Hawk-Eagle, Blue-and-Gray Tanagers, all these were familar to us, then it got interesting! 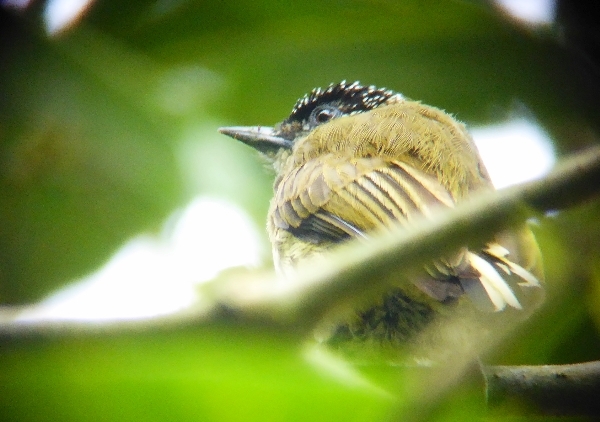 This is all I could see of the Olivaceous Piculet

Some of the most colouful tanagers started turning up such as, Crimson-backed, Blue-naped, Golden-hooded, wow, just fabulous. A few wrens were tracked down, we started with House Wren and ended with Sooty-headed Wren with Black-bellied and Grey-breasted Wood Wrens in the middle. 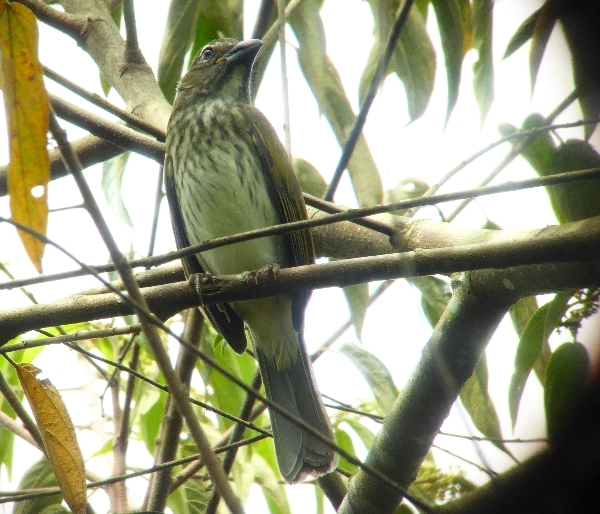 We caught up with the endemic Beautiful Woodpecker, also Red-heaed and Lineated Woodpeckers, as well as Olivaceous Piculet. Then a star bird appeared, the Spectacled Parrotlet, wow what a stunner. So was the Rufous-capped Warbler, Buff-rumped Warbler and a couple diffent Saltators, Streaked and Buff-throated. 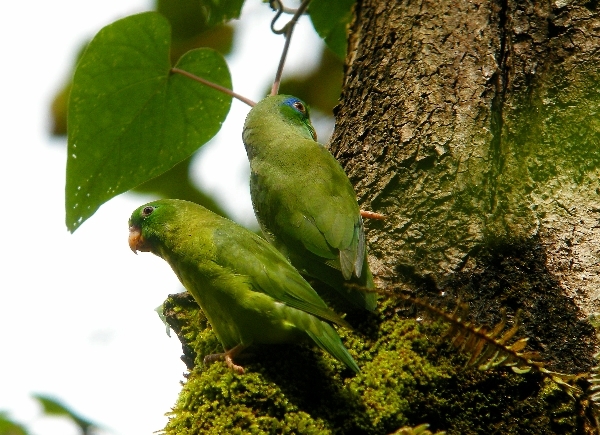 Goodies kept on coming, our guide got really excited when a Red-billed Scythebill appeared very close to us and just before that we had been watched the Bar-crested Antshrike, what a striking bird that one is.

Our target bird the endemic White-mantled Barbet failed to show after 3 hours of trying, but more goodies turned up in its place, Common Tody-Flycatcher, a couple Tyraanulets, Rose-breasted Grosbeak, Bay-breasted Warbler, the Black-faced Tanager caused quite stir as it was lifer for all of us. 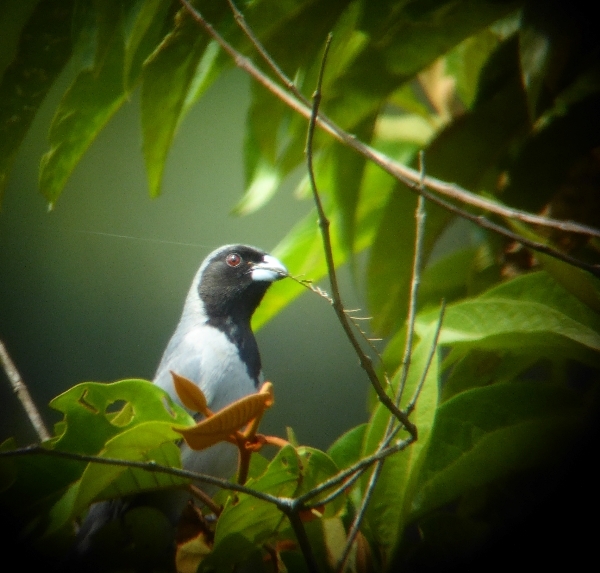 The track that we were on dropped deeper into the valley and it got very warm and humid, luckily the bus was able to drive down and pick us up. It was 2pm when we left for lunch which was taken at a roadside cantina not 100 meters along the main road.

By 3:30pm we were back on the track to try once more for the Barbet and after almost an hour the bird turned up, in fact, four of them shwed extremely well, hooray!  Not so many birds birds were on bshow in the heat of the afternoon so we called it day around 4:30pm. 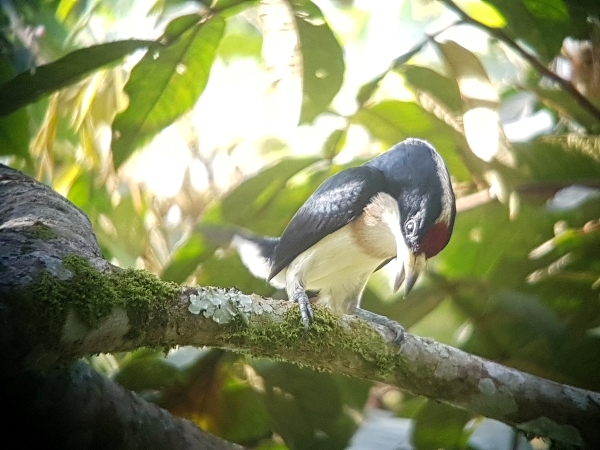 It took 21/2 hours to drive back into the centre of Medellin, the traffic was horrendous. So it was 7pm before we checked in and 8pm before we settled into our rooms. Non-one wanted to go down for dinner we were all shattered so no bird-log and species count just yet!