It was pouring with rain when we got up this morning at 5am, here was stilllight rain at 6am when gathered to board our 7 seater 4X4 after breakfast, we paused to watch at least 5 Rufous-bellied Nighthawks, they were chasing insects over the grounds and the main building, then the rain stopped.

We drove up the track that runs parallel to the river stopping to look at Swainson’s Thrush, Andean Motmot, Sickle-winged Guan and a Thrush that looked very much like a Pale-eyed Thrush. 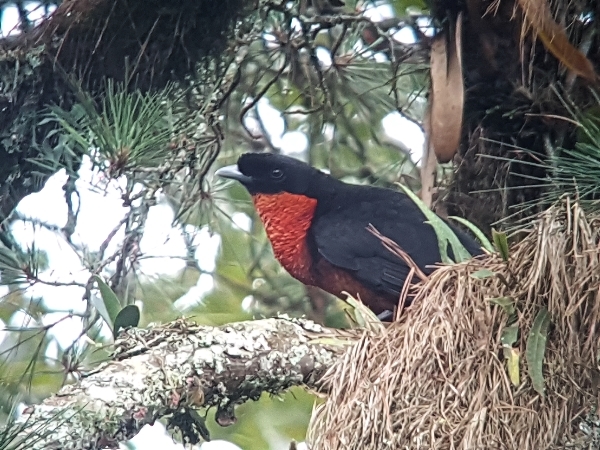 Our first stop was to try to see Stile’s Tapacula and Hooded Antpitta but both failed to show, we heard Green Jay and Grey-breasted Wood-Wren too. Then a Red-ruffed Fruitcrow sat nicely in the road for us and a couple of Pale-naped Brush-Finches moved through the scrub.

Another stop produced Wedge-billed Hummingbird and we heard Chestnut Wood Quail but failed to lure them out. Plumbeous-crowned Tyrannulet fed in the canopy with Rufous-breasted Flycatcher and then we found a Marble-faced Bristle-Tyrant quickly followed by a Speckled Hummingbird.

We had better views of a Red-ruffed Fruitcrow and another sighting of Andean Momot which swung its tail from side to side like a pendulum. Our stop-start journey ended at the end of the track where a bus terminus and a make-shift canteen/café sat in an open area. We birded the open area for a while finding White-winged Becard, Yellow-bellied Seedeater, Lesser Goldfinch, Grey-rumped Swift, Grey-capped Flycatcher and the star bird a Cerulean Warbler. 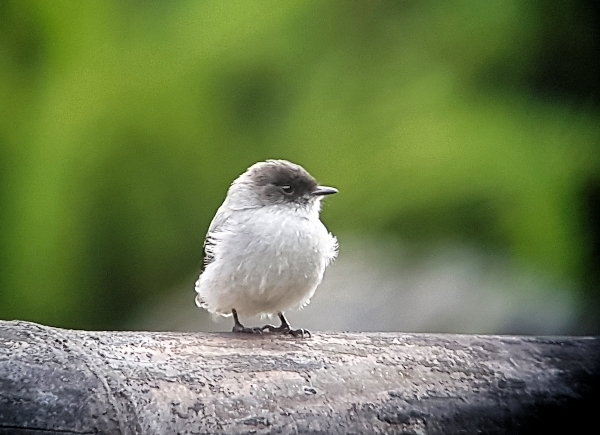 As we started our next section of the walk we noted Golden Tanager and Golden-faced Tyrannulet, Torrent Tyrannulet, whilst a Ringed Kingfisher flew over very high up and a Black-billed Thrush sat in a nearby bush. We then came up to a bridge from where we found several birds in quick succession. First, we had brief sightings of White-capped Dipper, then the superb Green Jay came into view quickly followed by Strong-billed Woodcreeper, wow! 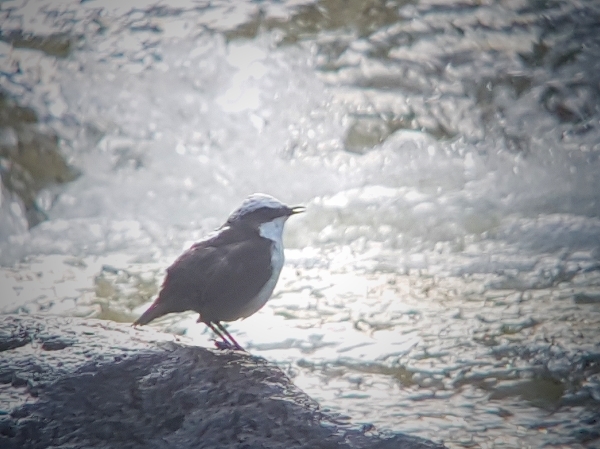 A flock of Golden-plumed Parakeets flew over as we were watching Scrub Tanager and yet another Golden-faced Tyrannulet. Our search for Torrent Duck failed to produce any sightings but we did then find Black-winged Saltator and had good views of Southern Rough-winged Swallows perched on some wires and a Black Phoebe sat on the bridge when we returned to it whilst a Green-fronted Lancebill sat in a tree right next to the bridge.

After a little snack back at the car we began or return journey, we had driven 7km along the valley and we intended to walk for most of the return trip. Our sightings started with Grey-breasted Wood-Wren and then we were delighted to find an Andean Solitaire. A Grey-necked Wood Rail walked along the track some distance ahead of us, then two Cauca Guans sat in a tree just above the track and showed very well, whilst a Southern Lapwing was found in one of the very few grassy paddocks.

A feeding flock provided us some interesting sightings but the best of all was Red-crested Ant-Tanager, what a gorgeous bird that one is, it showed very well. Also in the flock was Spotted Barbtail, Canada Warbler, Rufous-breasted and Slaty-capped Flycatcher, Slate-throated Whitestart and Scrub Tanagers.

A flock of Golden-plumed Parakeets landed on top of some nearby trees and we managed to scope them before they flew off. Also high up was a flock tanagers feeding on figs included the most colourful Multi-coloured Tanager and the Metallic-green Tanager. 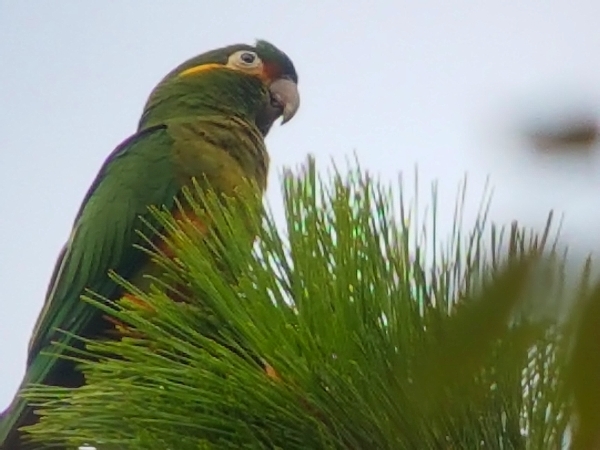 Towards the end of the walk we spent some time trying to see a Hooded Antpitta which eventually did show for a few of the group we then found a Collared Trogon and a male Racket-tailed Puffleg Hummingbird.

That concluded the morning’s birding, we drove the short distance back to the Lodge where a lovely lunch awaited us. Our lunch was interrupted when we were informed by the lodge staff that a group of Red Howler Monkeys had been found in the grounds. We all left the table and went to see these bright reddy/orange-coloured beasts.

At 3pm it was raining lightly just four of us met up for a walk around the gardens which was surprisingly busy with bird activity despite the inclement weather. We found four species of hummers feeding on the flowers, Racket-tailed Puffleg was a great sight, we also saw Western Emerald, Rufous-tailed and Steely-vented Hummingbirds, as well as Masked Flowerpiercer.

In the trees a number of tanagers were feeding alongside of Blackburnian and Canada Warblers, a Tropical Parula, Rose-breasted Grosbeak, Red-ruffed Fruitcrow and a few Guans. 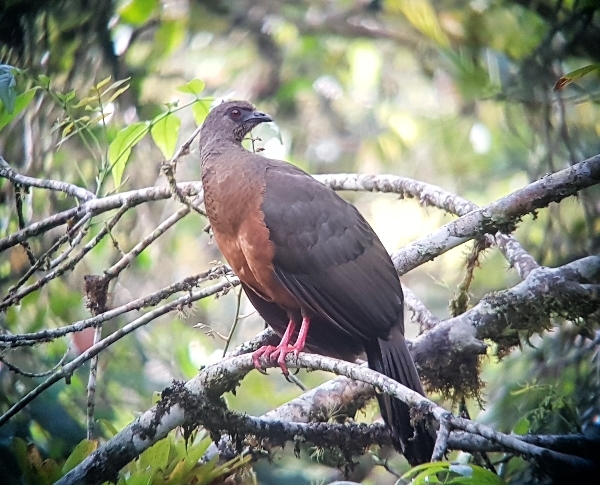 Sickle-winged Guan - very common in the gardens of the Lodge

In the grassy areas we saw Saffron Finch, Yellow-bellied Seedeater and Rufous-collared Sparrow, a couple of Brown-winged Parrots flew over as we were leaving the gardens for the track outside the lodge.

Unfortunately the rainfall increased which curtailed our birding, one or two of the group continued but most of us went back to our rooms. Reports of Rusty Flowerpiercer, Whiskered Wren (heard) and White-capped Dipper can to the fore at the birdlog which was called early at 6pm. 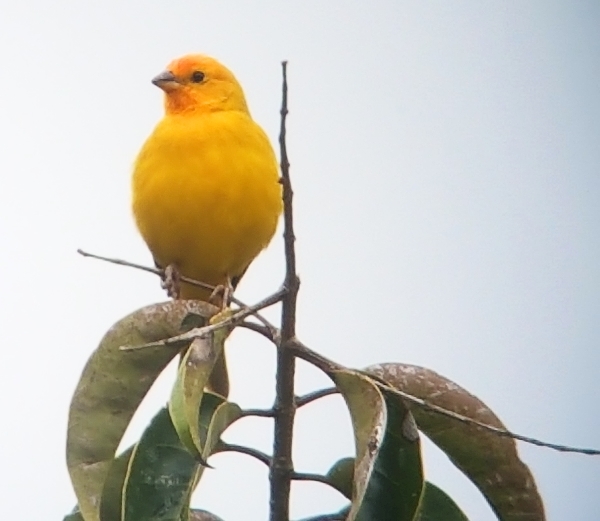 Saffron Finch also very common in the gardens, usually feeding on seeds in the grass

Our owl-prowl was cancelled as the rain turn into a heavy thunder and lightening storm, we lost power at the lodge so everyone went to bed early in the dark and without hot water.