MONTEZUMA LODGE AND TRAILS OF THE TATAMA NATIONAL PARK

Yes we spent all day walking (down) the main track beginning at the top of the national park, above the tree-line, at a height of 2600 meters or 8580 ft above sea level. It was a gorgeous morning we were so lucky with the weather, a clear blue sky, no wind and only a slight chill in the air.

We left the lodge at 5:30am after a quick cuppa, our 4x4’s hauled us up to the top of the ridge which took about an hour, we noted Smoke-coloured Pewee on the way up and the group in the leading 4x4 saw a Common Pauraque fly up from the track. At the top we unravelled our breakfast packs and enjoyed our first meal of the day in the most beautiful of surroundings. 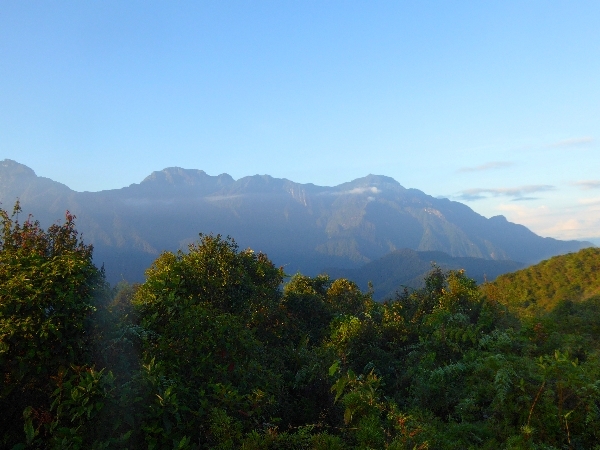 A view from the paramo

A Great Thrush came over hoping for tit-bits which he duly received and the endemic Chestnut-bellied Flowerpiercer showed really well just before we ate our breakfast, what a great start. Both Blue-and-White and Brown-bellied Swallows hunted over the scrub (paramo) as we ate. 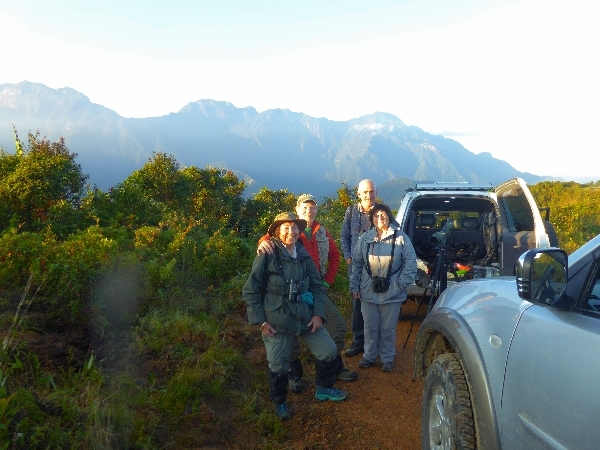 Our walk down began at 7am it was very quiet with very little bird song until we heard the endemic Montique Wren calling. It took a while but with patience we all got see this beautiful little fellow. We soon reached the upper bird-feeding station and found a host of hummers coming for a sugary-meal. Ten species were noted, two of which were new for us, the stunning Violet-tailed Sylph and the Dusky Starfrontlet. 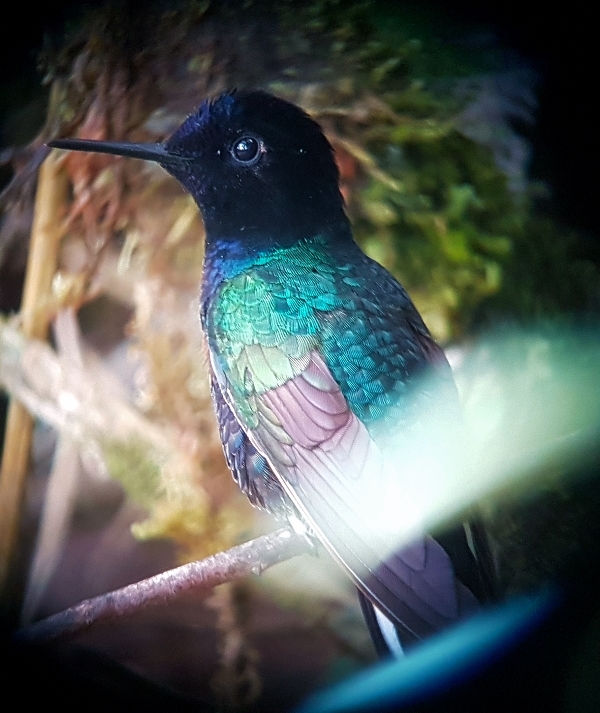 A couple of other species were found in the nearby scrub, Dusky Chlorospingus, Black-capped Tanager, Black-billed Peppershrike and the star bird the Streak-headed Antbird. Over the next couple of hours we saw some gorgeous species and a couple of new ones for our list. The Grass-green Tanager just blows you away with its beauty but so does the Purplish-mantled Tanager, the Masked Trogon and the Hooded Mountain Tanager. 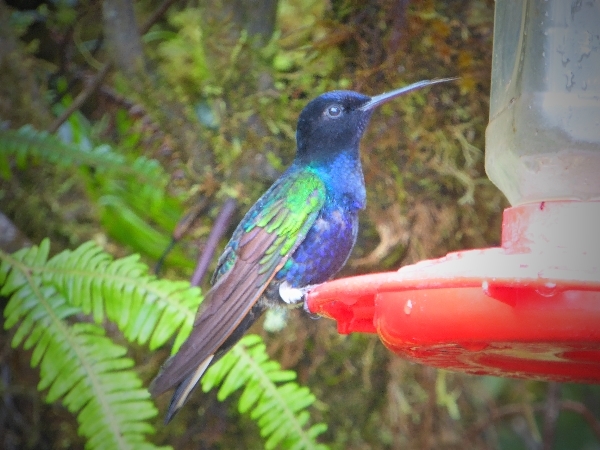 One of main target birds appeared a little later when we had our first of several sightings of the rare GOLDEN-RINGED TANAGER, another stunning bird. This was quickly followed by sightings of Indigo Flowerpiercer and another colourful but skulking Wren, the Rufous-breasted Wren. Glistening-green Tanager, Tricoloured Brush-Finch and Bluish Flowerpiercer were all new species for us and came in quick succession. 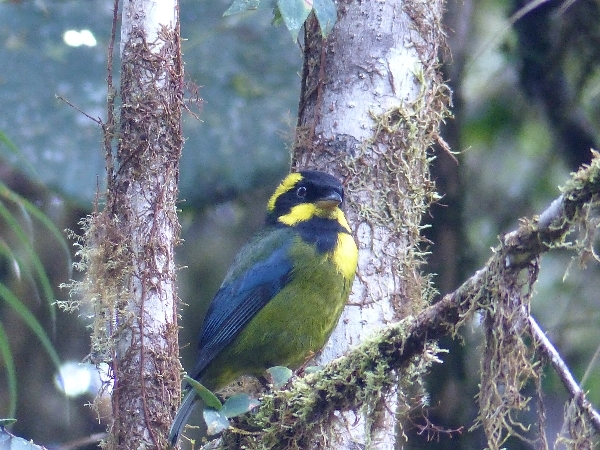 We had lunch at 12:30 this was brought up to us by the lodge’s own motorcycle courier service, it was delicious. Cloud cover started to come over us and as the day wore on it dulled the light and shrouded the forest in a thick mist.

But before all that happened we continued birding around the lunch spot, a mixed flock passed through the trees, we found a number of tanagers which included Black-chinned Mountain Tanager, and also a Red-faced Spinetail, both were new additions to our list. 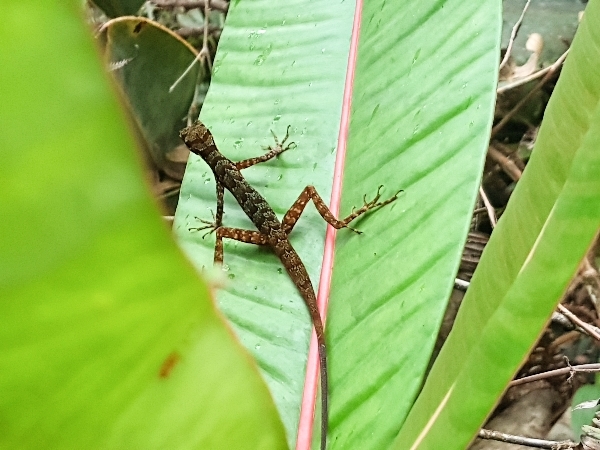 Brown Inca came next as we continued our walk down hill, then a superb Chestnut-bellied Chlorophonia. Black-hooded Mountain Tanager and excellent views of more Golden-ringed Tanagers followed shortly afterwards.

A second feeding station was our next stop and whilst we failed to add any new species there we stopped for a good 30 minutes watching up to 10 species of hummers. The final leg of our walk came next, thick cloud restricted our viewing quite a lot, and the light became very bad, but it remained rain free. 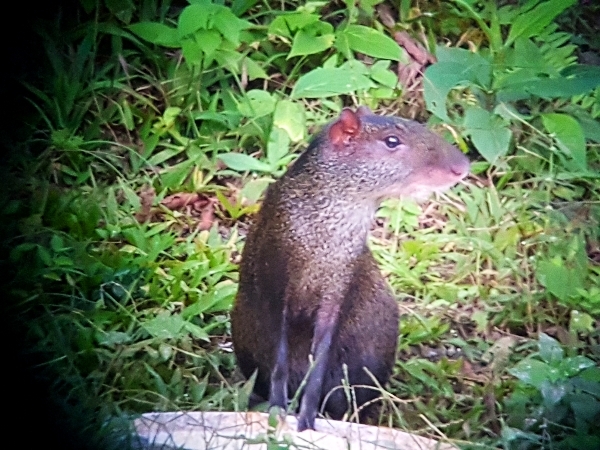 A superb looking Orange-breasted Fruiteater showed reasonably well followed by our second ‘biggie’ of the day when we came across a small party of BLACK-AND-GOLD TANAGERS, wow another excellent species in the bag. Some of us had very brief views of Handsome Flycatcher and we spent a good 20 minutes hoping for a view of another skulking Tapaculo. This one, the Alto Pisones Tapaculo (soon to be renamed the Tatama Tapaculo) failed to appear until we were leaving in the car, it flew across the track in front of us and sat in view as we slowly rolled the car down the hill using it as a hide.

Our last good sighting before we finished the walk was of Olive Finch, two of these beauties  popped out onto to the track and started eating rice that our guide Juan had put down. Apparently the place where we saw them was a regular lunch stop for groups and the finches started coming down for tit-bits awhile ago. Now as soon as the bird hear a car coming they start singing and wait for there reward! How amazing is that! 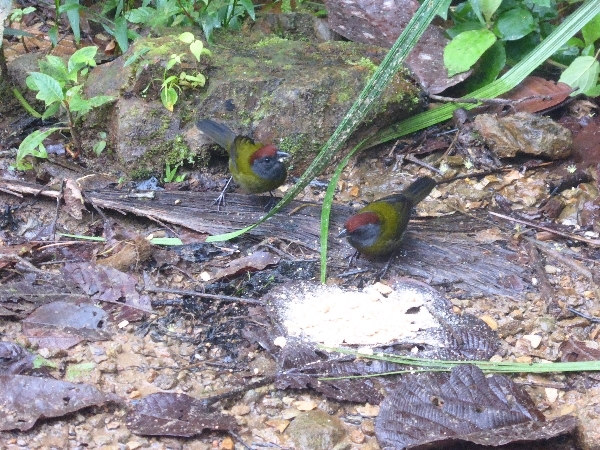 It was almost dark when got back to the lodge and it started to rain, so we had a nice cold beer and watched the action around the feeders under the shelter of the canopy on the outside terrace of the dining area. 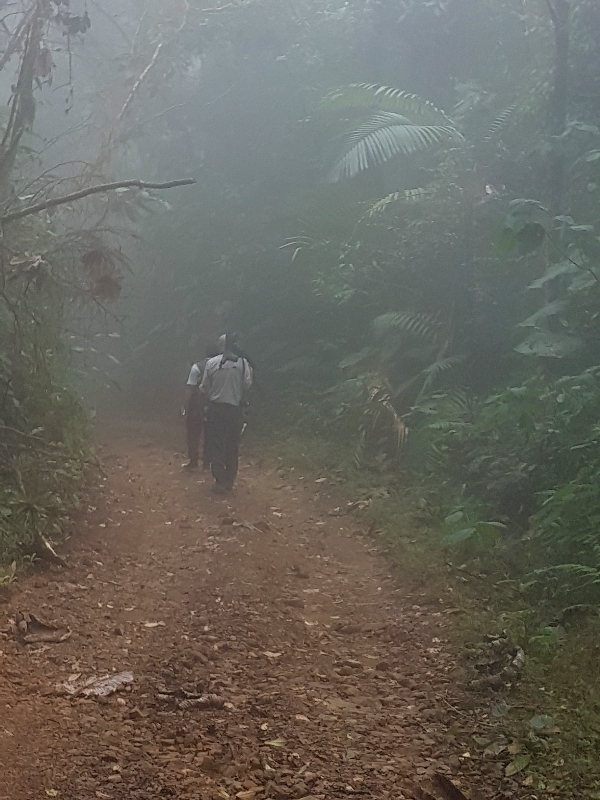 sometimes the visibilty was very poor!

It had been another wonderful birding day, with great weather and excellent birding. We had dinner at 6:30pm and called the log afterwards, we had seen over 80 species, 21 of them were new additions, which brought our list total up to 409 species. Tomorrow is our last full day, we are going to return to the track and bird the lower section which we had missed today.