Our last full day had arrived and it began just like all the others with a very early start, we met for coffee at 5:20am. We then repeated the same pattern as yesterday morning with a drive along the main track into the Tatama National Park except for this time we only drove half way up the track and began our walk down from there. 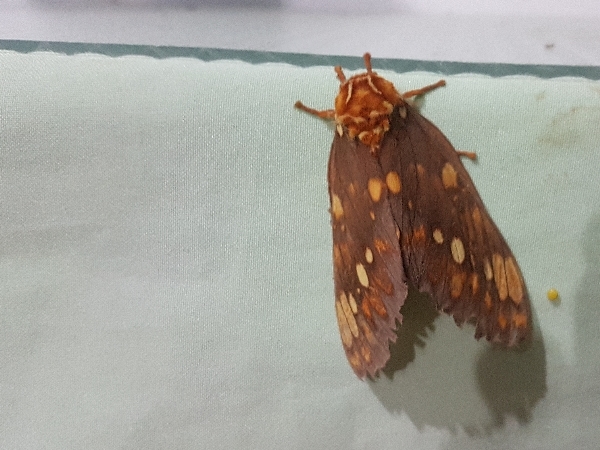 some of the moths around the lodge in the morning are both huge and beautiful,this one was 10cm  (4 inches) long

This lower altitude section supports a different range of species and we hope to see many of them, our main target was the Toucan Barbet, indeed it was my most wanted species of the trip. It took quite a while for all of us to see this enigmatic species, we heard it many times calling and one or tow of the group had brief views. After about an hour we all had good views of it, smashing bird. 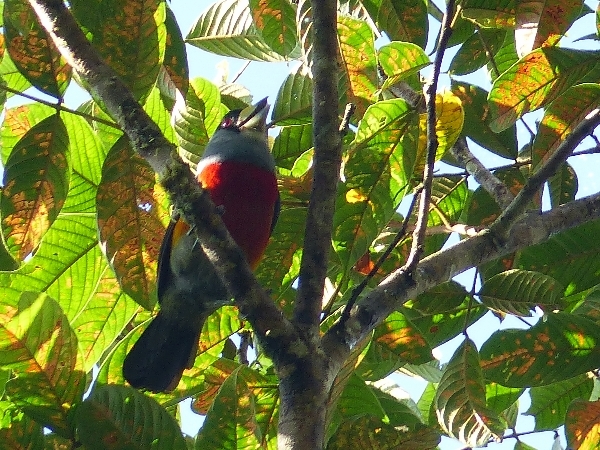 We ate breakfast before beginning our walk downhill, a Red-headed Barbet could be heard during breakfast along with the Orange-breasted Fruiteater, we saw Slate-throated Whitestart at that time too.

The walk began around 7am and very soon we were in the thick of it, a feeding flock held a number of different tanagers but it was the Rufous-throated Tanager that grabbed our attention quickly followed by Choc Tyrannulet. The Ornate Flycatcher turned up a few times as well as Black-chinned Mountain Tanager and we noted our second sighting of Emerald Toucanet.

Our next trip tick was yet another tanager, the Flame-faced Tanager, yet another beauty. We had good views of Tawny-throated Leaftosser as we hit another feeding flock. The next 15 minutes or so produced a good number of species and four or five more trip ticks in a row. A pair of Red-headed Barbets finally showed followed by Choco Vireo and a couple of Lemon-browed Flycatchers, a Smokey-brown Pewee landed in the same tree as the flycatchers. 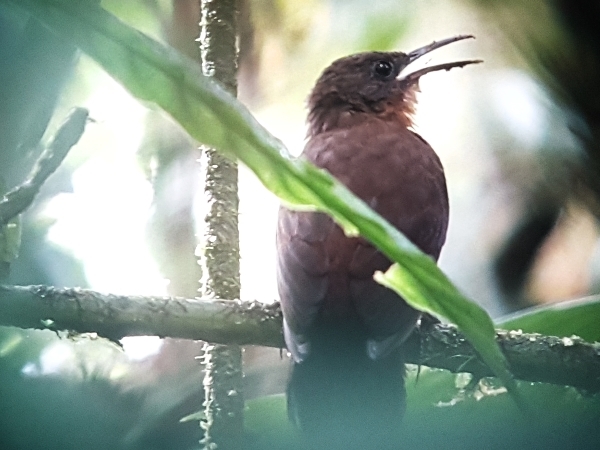 Yet another purple patch occurred about 30 minutes later when we found more new species in a feeding flock.  Yellow-bellied Antwren, Scaly-throated Foliage-Gleaner, Spotted Woodcreeper, Rufous-rumped Antwren and a Barred Becard were all new for us and we enjoyed them too. Also included in this spell was Summer Tanager and Red-faced Spinetail.

We stopped on the small bridge where the local guides have been feeding Olive Finches for quite a while, this time only one turned up but it showed really well in quick short bursts. From a vantage point we had a great vista and from there we noted in the sky we saw a raptor, it was a Swallowtail Kite and then two Turkey Vultures drifted over a ridge. Scoping the far valley we saw a colony of Oropendulas, both Russett-backed and Chestnut-headed were seen well, albeit very distant and a Golden-bellied Flycatcher sat nicely for us on the top of a tree stump. 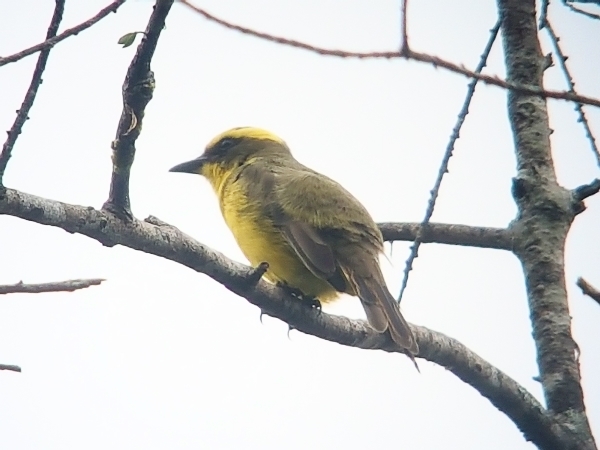 The last section of the walk produced even more new species, after you think you have exhausted the supply of new birds out pops another five! The Ochre-breasted Tanager was a pretty dull bird but the Broad-billed Motmot was something special, it sat right out for us, a beautiful orange and green combination with a long pendulum-like tail. A party of Yellow-throated Bush Tanagers (now called Yellow-throated Chlorospingus) passed through the tree tops, they were hard to get on to but we all managed it eventually. 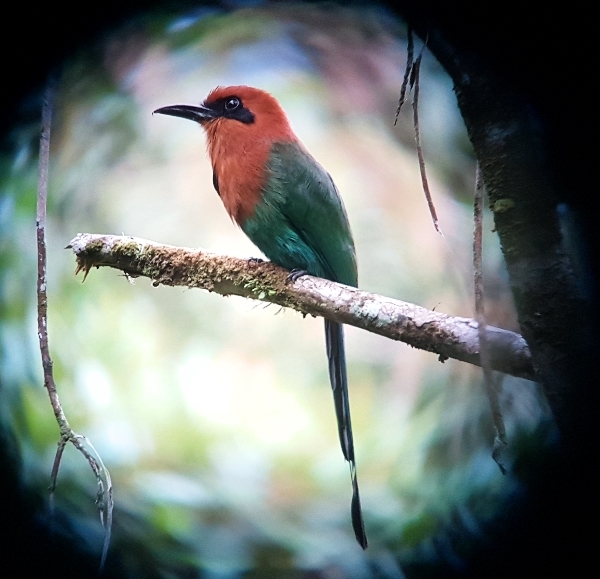 Our last two bits of excitement occurred as the light began to fade, we had been extremely lucky with the weather again, the cloud remained fairly high, we had had spells of sunshine but no rain. We approached a second bridge this one spanned the River Clara, it was in full flow with plenty of white water. Despite the noise from the river our guide heard a Choco Warbler which gave us great views as worked its way around the bridge area. We also found another Green-fronted Lancebill which posed nicely for the cameras and then a beautiful Golden-winged Manakin appeared, it was a male, completely black except for a large tuft of yellow draped over its face. 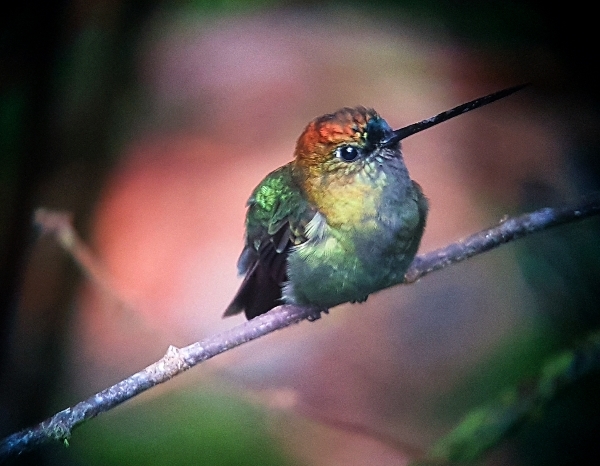 A steady climb took us away from the river and after 100m meters or so we heard a Rufous-breasted Antthrush calling, we stood looking down a steep forested embankment hoping for a glimpse of this hard-to-find species, but it lived up to its reputation and we never saw it. 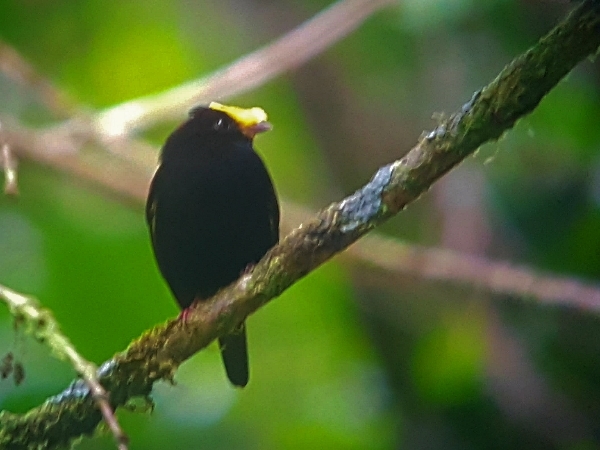 That concluded our last full day, tomorrow we leave mid-morning for the airport with a couple hours for birding beforehand.

Another very enjoyable dinner was served around 7pm. Our bird list total had been increased by 15 species taking it to 424, incredible really, as we have just scratched the surface of this huge country covering about 1/5 of the landmass, which has a total species count of 1,881.