Our last morning had arrived, we had a lie in and took breakfast at 6am, it was nice to see the lodge and its gardens in the morning daylight. The feeders were very busy with hummers and tanagers and all kinds of species flitted around in the trees.

The weather had been very kind to us so far,but today it was very dull, misty and it rained lightly during most of our walk. 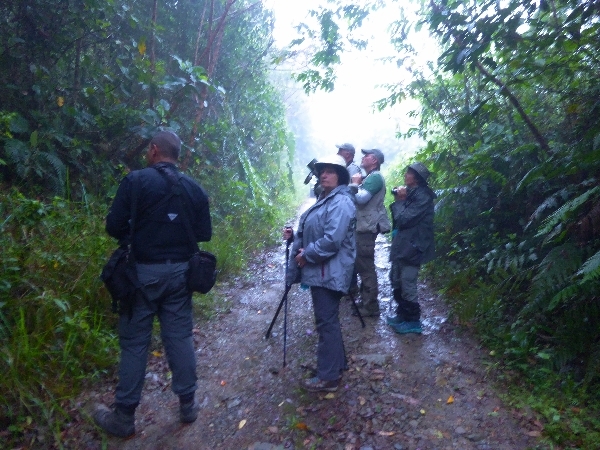 We made good use of our final few hours by birding the track that leads into the national park on foot. We caught up with Russet-backed Oropendula at the feeders, a Bay-breasted Warbler in the trees as well as an Agouti and a Possum species which evaded identification by disappearing quickly.

Once on the track many birds were singing we concentrated on those species we hadn’t seen before. A Bar-crested Antshrike was nice to see then and Ochre-bellied Tanager worked its way through the hedgerow, but we never had good views of it. We found several common tanager species before a Greyish Piculet appeared briefly then we had good view of a Club-winged Manakin.

About 10 minutes were spent waiting for a Zeledon’s Antbird to pop into view which it duly did and our next bird was the all brown, Uniform Treehunter, hence the name. 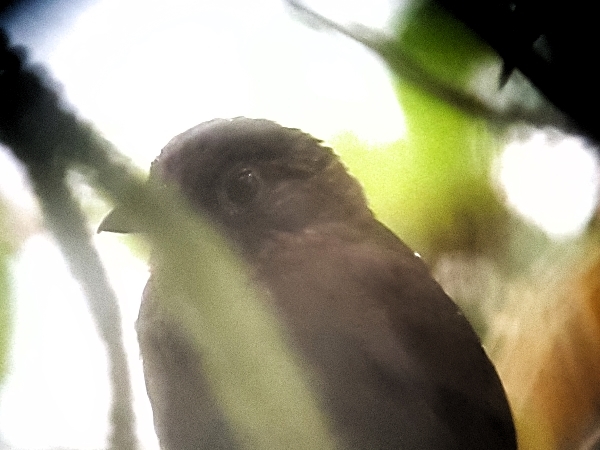 This Uniform Treehunter sat for quite a while but it was still very hard to see never mind photograph it.

Our last target species gave us the run around and most of us never saw it, this bird came very close to the track and called several times. Only two of the group saw small parts of the elusive Rufous-breasted Antthrush.

Well that concluded our birding for now, we had to pack up the cars with our luggage and set off for the airport. One stop was made along the way in a valley where coffee plants covered the landscape and tall trees grew along the edges of the fields. The weather improved after every kilometer and by the time we stopped it was hot with bright sunshine! 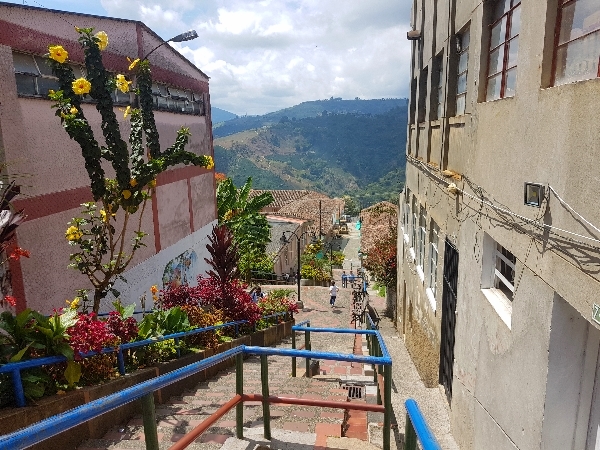 A view from the car as we passed through Apia

It was packed with birds, we started with Yellow-faced Grassquit, Yellow-bellied Seedeaters and several Tyrannulet sightings, namely Black-capped, Brown-capped and Golden-faced Tyrannulets. The Yellow-backed Oriole was finally bagged by all of us and a couple of Pale-breasted Spinetails put in an appearance. Dozens of White-collared Swifts flew over and we noted a few Grey-rumped Swifts too. But it was the endemic Turquoise Dacnis that was our target bird and just as we were gathering to return to the cars one of them showed very briefly, we all saw it in flight and noted the colours but we never had it perched, you can’t win them all.

Our journey to the airport went smoothly although we did hit some traffic in Pereira, but we arrived in good time at the airport. We said goodbye to Juan, our guide and to our second driver, the tour was over, just two flights and an 18 journey to go. The rest of the group were off to Northern Colombia for another 9 days but I had to get ready for my trip to Costa Rica which is coming up shortly so I am going back to the UK.