For the second day we walked the mountain forest trails at the Phia Lodge, I can’t emphasize enough that rain forest birding can be unpredictable, you walk the same trail on different days and on one day see many species and on another day you see practically nothing. You can also walk the same trail twice and see complete different species on both occasions, this was the case today compared with yesterday. 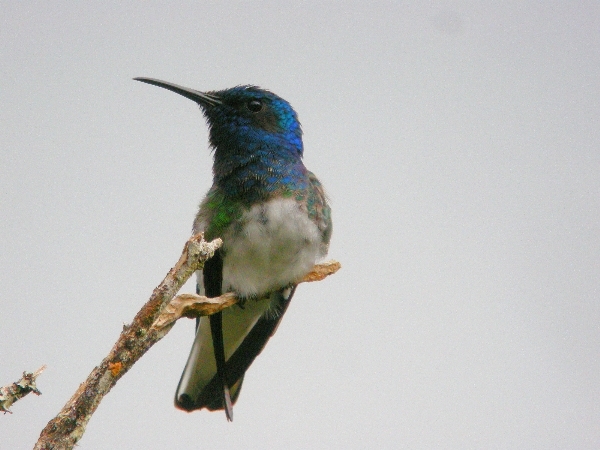 We walked up to the top of the ridge today along the same trail as yesterday but we missed out the trail to the waterfall. New species came on a regular basis. We started on the trail around 6:30am and our first bird was a Streak-capped Treehunter it showed well in the gloom of the forest. Next we found a Rufous-necked Wood-Rail but only a few of the group saw that one before it scurried off into the undergrowth.

The Andean Motmot was much better it sat out in full view, a lovely bird. Next came our second Brown-billed Sythebill followed by good views of Three-striped Warbler and we tried to track down a Ruddy Foliage Gleaner without success.

A Green Hermit came next followed by a sought-after bird the Ochre-bellied Antpitta, unfortunately the bird failed to show we could only hear its call. A Dusky-capped Flycatcher was found with a mixed feeding flock of species which included both Black & White and Blackburnian Warblers.

The melodic song of the Grey-breasted Wood-Wren caused to to pause a while but we failed to see it, this was followed by our arrival at the viewing platform found half-way up the hill, it was now 8am.

A Collared Trogon called repeatedly but never showed whilst Golden Tanager, Yellow-throated Bush-Tanager, Acadian Flycatcher and a Greenish Puffleg all showed well. Moving on we walked further up through the forest and stopped when we heard another Grey-breasted Wood-Wren, this one was much closer to the path so we all managed to see it, an unexpected bonus was the appearance of a Sooty-headed Wren.

The Wren saga was quickly followed by an Antpitta sighting, the Ochre-bellied Antpitta to be precise. This tiny ground-dwelling species sat on a branch about ½ meter off the ground, a super find. A brief view of Azara’s Spinetail was followed by a fly-over of the tiny Barred Parrot then Jonnier our guide found a Booted Racket-tail, unfortunately it was a female which does not have the extended ‘racket’ tails.

After stopping for a break at a sheltered seating area we set off back down the hill at 10:30am. We found several more species but until we reached the lower levels it was pretty quiet. We noted White-crowned Manakin, Andean Leaf-Tosser, and a real gem was the Golden-breasted Fruiteater, this bird flitted around in the canopy and it took a while for everyone to find it. 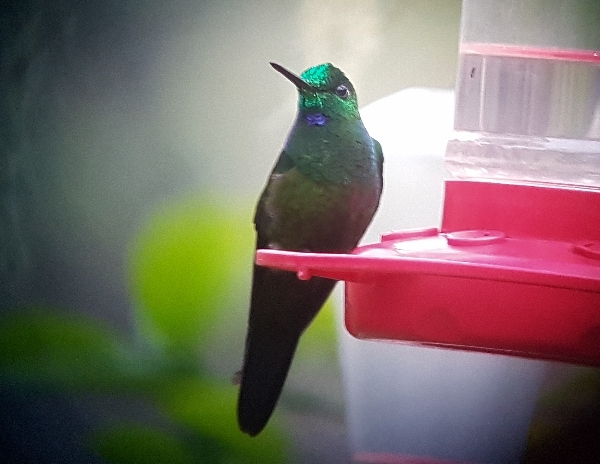 Green-corwned Brilliant taken in the gardens

Yet more birds were found as we approached the final section of the walk, Black and White Warbler, Canada Warbler, Blackburnian Warbler, Beryl’s Spangled Tanager and several of the common Tanager species.

The final two new birds for the trip list were found near the end of the trail, first a Rufous-naped Greenlet showed well and as we watched it a Slaty-capped Flycatcher came into view, two nice species to finish off our morning’s birding.

We had a lovely lunch back at the lodge and a nice siesta before venturing out again around 3pm. We just decided to walk along the main track and we didn’t go far before finding a lot of species. A dozen Red-bellied Grackles flew over us just before we found a Variegated Bristle-Tyrant. A mixed flock of tanagers and warblers passed by, along with Blue-naped Chlorophonia, White-naped Brush-Finch, Blue-naped Tanager and a Western Emerald. 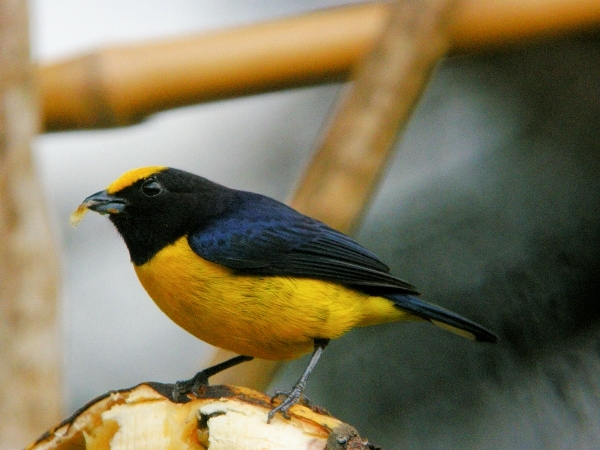 We could hear an Oropendola calling in the distance and Jonnier our guide named it as a Russet-Backed Oropendola but it never came near us. A Black-winged Saltator flew over just before our last bit excitement happened. Jonnier drew our attention to a cluster of feathers at the side of the road, just as he was bending down to take a closer look a Tinamou flew up out of the grass verge giving him and the rest of us a fright. It was identified as a Highland Tinamou and that was the last bird to be listed on the trip list for our stay at Phia Lodge.

It was a wonderful place to start our trip, we had seen some fantastic species and recorded upwards of 200, a great start. Tomorrow we are transferring to the town of Jardin for a two night stay.