What a fantastic day we had today, there was a spell during the afternoon where the birding was so good that as far as I can remember was the best I have ever had!

It was a long day but most enjoyable and we walked down hill most of the time. We began by meeting at the hotel entrance at 5:15am for a jeep ride to the entrance to the reserves which was about an hours drive, uphill all the way. 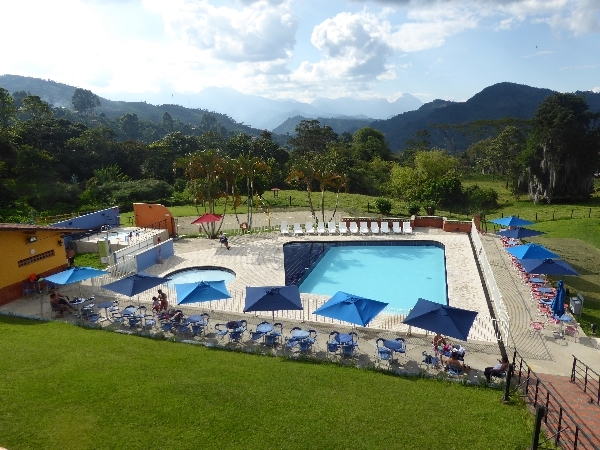 We arrived in cloud, it was quite cold, dull and misty, we were just under 10,000ft above sea-level. We had driven up in the dark and as it got we noted Great Black Thrush, Sickle-winged Guan and an unidentified Nightjar all on the track. 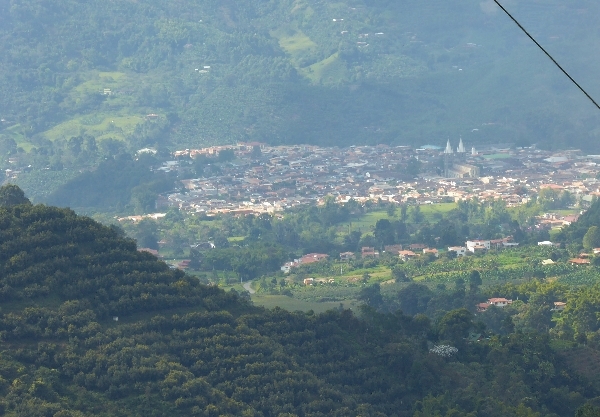 The view of Jardin from the National Park

The reason for being where we were and at that time in the morning was the Yellow-eared Parrot. We were in the prime spot to see them leaving their roost and dispersing to their feeding grounds. Sure enough after 15 minutes we had had several sighting of high flyovers and a couple of birds were seen perched. Moving to another vantage point we noted 5 Speckled Parrots flying over and a Streak-throated Bush-Tyrant sitting in a bush.

A little later we had great views of the Yellow-eared Parrots when 13 of them circled over us very low, smashing. At the same time we noted Slaty Bush-Finch, Lesser Violetear a Rufous-collared Sparrow. We then sat in the jeep and ate our picnic breakfast, the cloud was low and often shrouded the area with a thick mist. 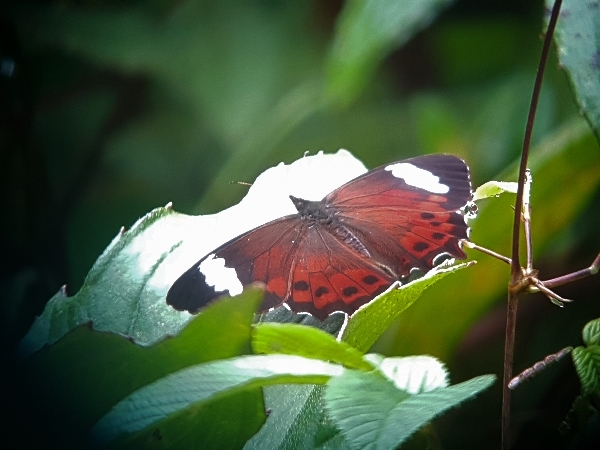 one of the many beautifrul butterflies seen today

Our main morning walk began around 7:30am we headed back the way we had driven up and the birds came thick and fast. The Collared Inca was a common sight and soon in the bag, the stunning White-capped Tanager was superb but both the Rufous Antpitta and the Undulated Antpitta remained heard-only and unseen.

Golden-fronted Whitestart, Cinnamon Flycatcher, Grey-headed Bush-Tanager, Citrine Warbler and White-browed Spinetail all went on the list during the next couple of hours. The must-see Ocellated Tapacula gave us the run-around and left us empty handed even after we got very close to it. 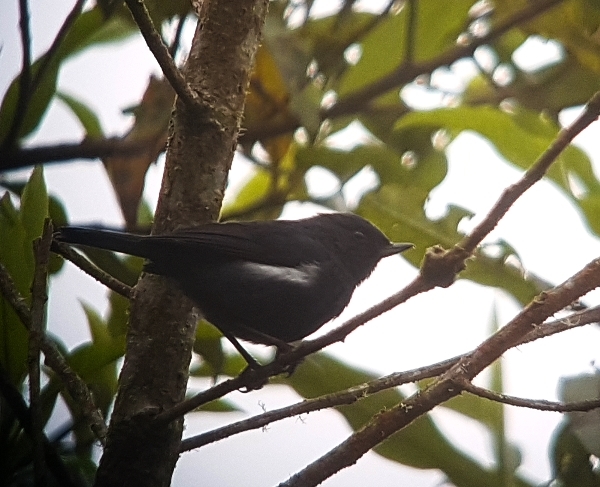 Our walk continued with the jeep following behind us, we had varying degrees of light as the cloud moved out and came back some minutes later. The temperature improved as we got deeper into the forest and bird numbers also increased. A couple of birds stuck out in my memory, including, White-sided Flowerpiercer, Rufous-breasted Chat-Shrike, Black-capped Hemispingus and Sharp’s Wren. We then spent another long time tracking down a second Ocellated Tapacula, this time we all had good views of it as it sat in the dense undergrowth calling, what a great result.

We stopped for our picnic lunch at the jeep, it was a lovely meal of rice, chicken, potato, plantain, spicy sausage and egg all wrapped in a biodegradable banana leaf. It was now 12:30 and we were eager to continue the walk. 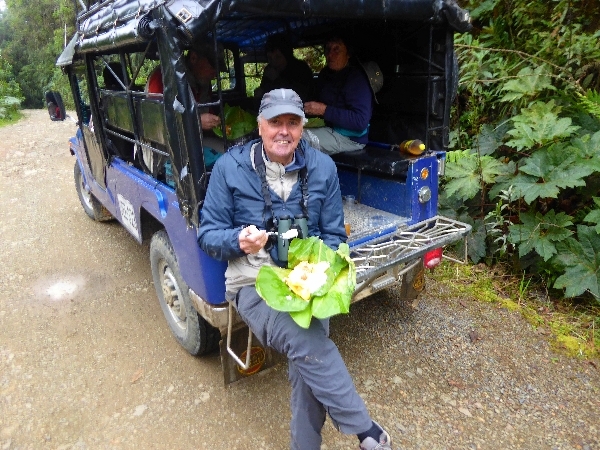 We spent 15 minutes or so trying to track down an Andean Pygmy Owlet but we failed to coax it out into the open, but minutes later we were watching Barred Fruiteater, Speckled Hummingbird and Green and Black Fruiteater.

Then we hit a purple patch and spent an hour or more watching some of most colourful birds you are ever likely to see. We hit upon a mixed feeding flock and what ensued was one of best birdwatching sessions I have ever experienced and will not ever forget it!

Johnnier our guide worked overtime he was magnificent, calling out species after species and getting us all to see them. The most beautiful Tanagers on the planet appeared one after another, they were joined by flycatchers, 3 species of woodpecker, woodcreepers, whitestarts and many more. 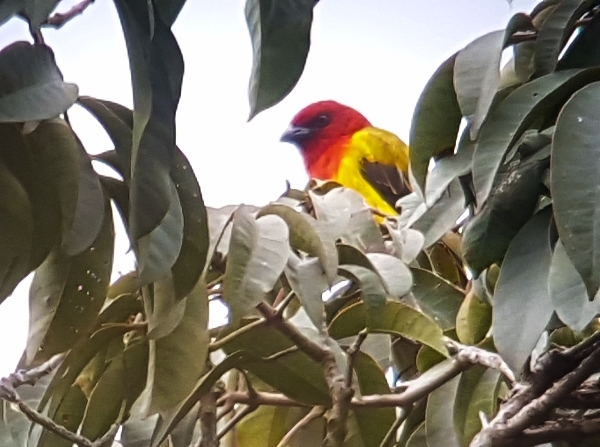 It all started when we noticed a feeding group of Mountain Caciques we quickly realised that we had stumbled upon a mixed feeding flock with perhaps over 100 birds flitting about in the canopy. Checkout some of these species on google: Pearled Treerunner, Hooded Mountain Tanager, Red-hooded Tanager, Blue-capped Tanager, Grass Green Tanager, Blue-winged Mountain Tanager, Saffron-crowned Tanager, Plushcap Finch, Streaked Tuftedcheek, Black-billed Peppershrike, Rufous-breasted Flycatcher…………the list goes on but you get the picture.

Luckily for us the flock moved in the same direction as us and crossed the track several times. I must mention the woodpeckers. Two weeks ago in Sri Lanka I thought I had seen the most beautiful woodpecker on the planet then today I saw the Crimson-mantled Woodpecker, wow, that blew me away with its beautiful plumage, amazing. 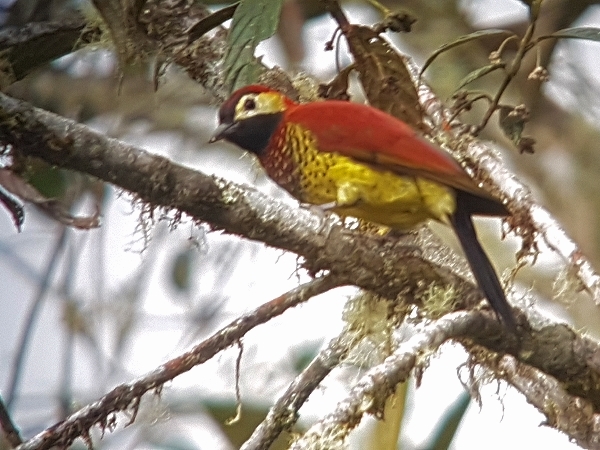 After the flock finally disappeared we were left speechless, but we carried on down the track for another hour. We kept on adding new species to the list, Golden-olive Woodpecker, Tyranine Woodcreeper, Long-tailed Sylph, Pale-edged Flycatcher to name but a few.

At 3pm we were jumped onto the jeep and headed back into town and after a quick stop off at the hotel we reconvened at 4pm and headed off to a local site where a famous Andean Cock-of-the-Rock ‘lek’ takes place every afternoon.

It was a total surprise and an amazing sight, we never expected to be ushered into a private garden where viewing platforms had been installed. Furthermore, we absolutely never expected 15 or so male Andean Cock-of-the-Rocks to be displaying just a few meters from us, it was unbelievable. Sometimes five males were on the same branch trying to out display each other, for some reason there were no females to be seen but this never affected the male’s behaviour. 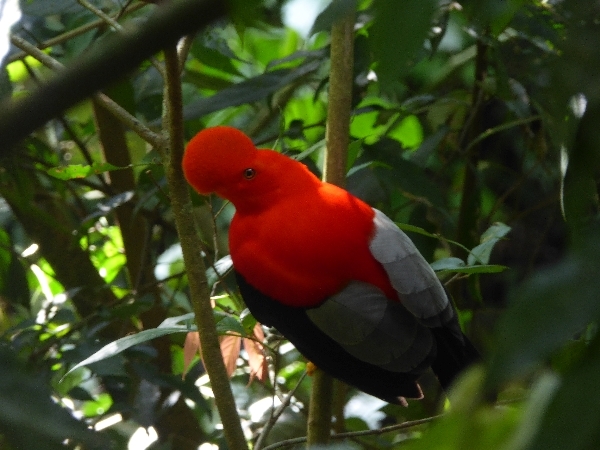 Also in the garden a number of feeders attracted many tanagers and we even found a new one for the list, which was White-lined Tanager. A Russet-backed Oropendula also put in an appearance, what a great ending to a superb day’s birding, I like this country.

For dinner we ate just off the main square in the centre of Jardin, what a lovely place, the food was delicious and the beer went down well too. A Tuc-Tuc ride home just rounded off a perfect day.