ALL DAY AT RIO BLANCO LODGE

We had a late breakfast at 6:30am, it was pure luxury having an extra hour in bed. A bright clear sky greeted us as we set off on our morning walk although it was a little on the chilly side as we were at 8000ft above sea level.

We noted Sparkling Violetear as we took the short walk to the first of three Antpitta stake-out feeding stations. Our first target was the Bicoloured Antipitta, a bench had been installed and we sat in a line in anticipation of a sighting, the guide whistled to the bird for about 20 minutes but unfortunately the Pitta never showed. We noted a number of species during our vigil, Crimson-mantled Woodpecker, Zara’s Spinetail and we heard a Wood-Quail. 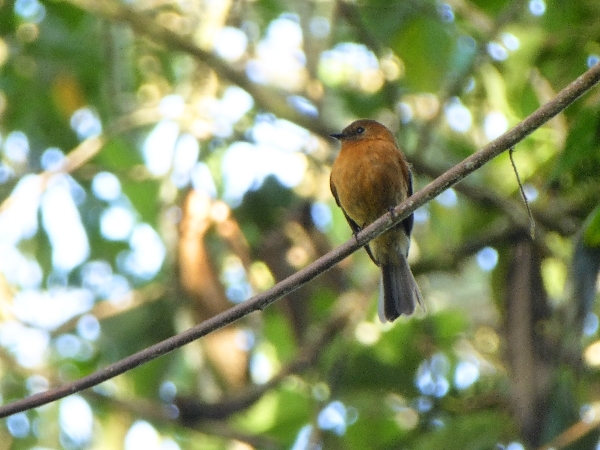 We then walked up the main track climbing all the time towards a ridge, a narrow track off to the left took us to our second Antpitta feeding station. This time we were lucky when within a few minutes a Brown-banded Antpitta, an endemic, came to pick up worms and grubs that the guide had put down. A pair of Stripe-headed Brush-Finches and a beautiful male Green-and-Black Fruiter also came down to the feeding station whilst a Cinnamon Flycatcher flitted about above us. Then a Chestnut-crowned Antpitta arrived, wow what a nice sighting of a rare and hard to find species. 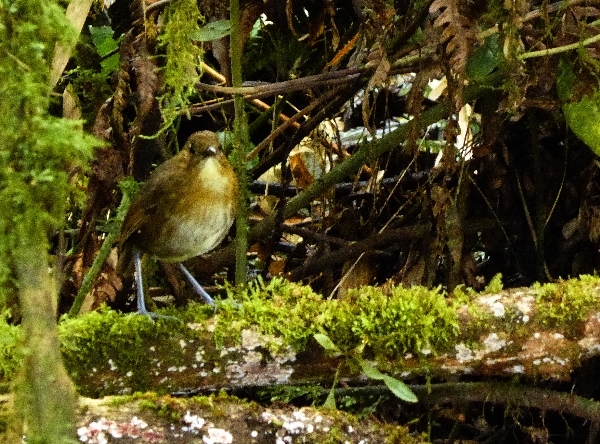 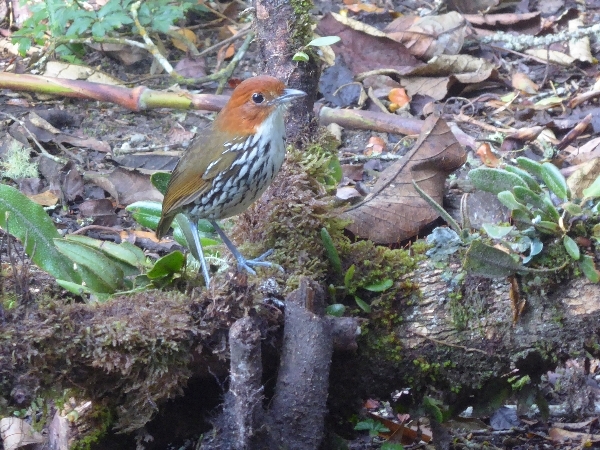 Feeling pleased with ourselves we soldiered on up the hill stopping every so often to look at new species that the guides picked out. We spent some time looking for Black-billed Mountain Toucan until we all had views of a group of 5 of them, we also found Acadian Flycatcher, Squirrel Cuckoo and few Blue-and-Black Tanagers. 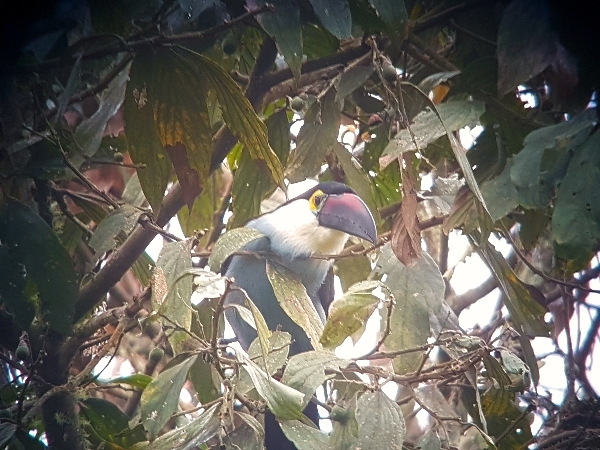 We arrived at the third and final Antpitta feeding station and the local guide did his whistling trick and sure enough out popped our third Antpitta of the morning, the Slate-crowned Antpitta, great stuff.

We continued along the ridge having marvellous panoramic views of the mountains and valley to our right. A Crested Caracara was noted far down the valley in a dead tree and numerous Brown-bellied Swallows flew over us whilst a Black Hawk-Eagle circled in the distant.

At this point we turned around and started back down the track, it had clouded over and became quite dull. We tracked the Toucans again, this time we had much better views of them and as we reached the start of the ridge we came across a number of birds feeding in the trees, it took about an hour to move from this place as so many birds were on show. 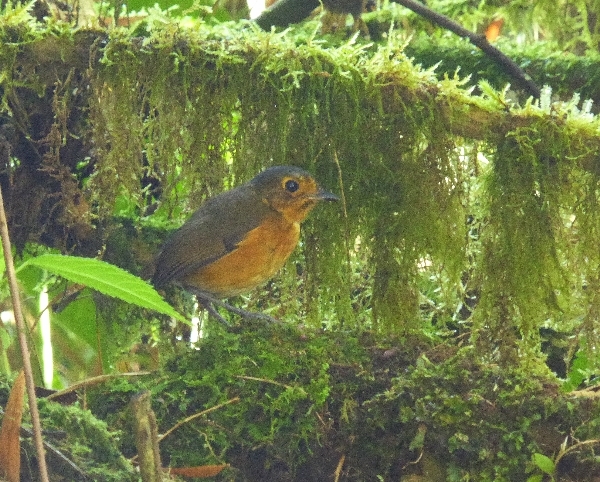 The third Antpitta of the day - Slate-crowned Antpitta

A couple of goodies turned up with a bunch of other species, Smokey Brown Pewee , Black and White Warbler, Blackburnian Warbler, Brown-capped Vireo, Golden-faced Tyrannulet, Beryl’s Tanager and a few common species.

A walk in the gardens of the Warden’s House produced a few hummers as well as Summer and Blue-winged Mountain Tanager and then Araufo our guide found a rare Masked Saltator, what a gem and a hard find species. We then quickly returned to ridge path as a shout of Quetzal went up from another birding group. What a treat a Golden-crowned Quetzal showed on and off for a while. 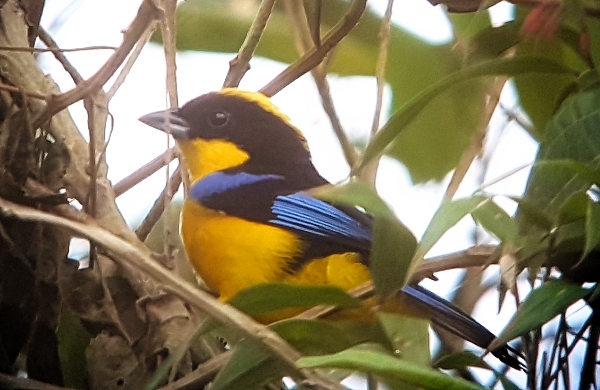 After that excitement we continued down the hill towards the lodge and lunch, until we bumped into a feeding flock and a similar experience to that we had a couple of days ago. Many new species were called out by the guides it was panic and mayhem amongst the birders.

After that we walked down to dinner, exhausted by the number of birds and all the new names to write down. After a long lunch break we were off again up the hill to continue where we left off, unfortunately for us it clouded over and got very dull, rain was on its way.

In the gardens we found Buff-breasted Mountain Tanager and Smoke-coloured Pewee as well as another Crimson-mantled Woodpecker and several other species. As we walked up the hill it started to rain which curtailed our birding for a while. We sheltered under the canopy of one of the Antipitta feeding station and traded birding stories for an hour or so.

It cleared up and brightened somewhat as walked the rest of the way up to the ridge, we noted Purple-backed Thornbill, White-naped Brush-Finch and Striated-headed Antbird. At the top we had a great time once again with plenty to look at, many were species we had encountered this morning but we added Rufous-headed Tody-Flycatcher, Yellow-bellied Siskin, Emerald Toucanet and Black-eared Hemispingus. 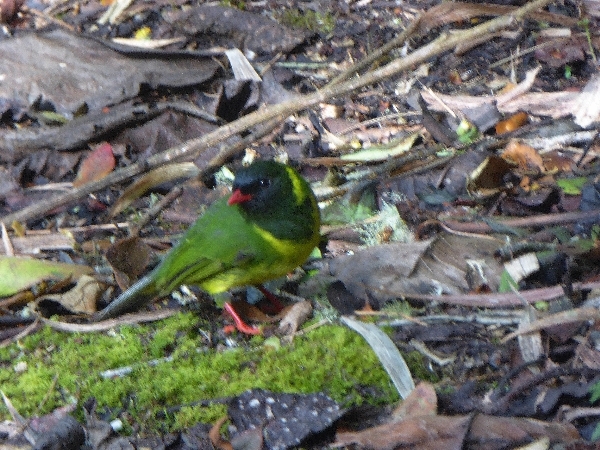 It was getting dark as we walked along the ridge through the Warden’s garden, we found the Andean and the Sickle-winged Guans feeding in the mature figs as we walked to an open area.

We waited until dusk hoping for a few night birds, it took a while, but two or three Rufous-bellied Nighthawks flew over us and a Band-winged Nightjar landed on the track. Quite a good result and a nice ending to our day.

It was well past 7pm when had dinner which went down nicely with a glass of Chilean red and a Colombian beer. The bird log revealed that our total bird count was now over 310.