We spent all morning walking the 'River Trail' in Carara National Park recording some excellent sightings, the afternoon was spent on a superb river cruise...........

We had a day of two completely contrasting halves:  the morning birding was a walk through tropical rainforest where birds were hard to see or find and in the afternoon we cruised on the river Tarcoles where birds we easily seen and easy to locate. Some of the group decided to have the morning 'off ' to relax back at the lodge, they sat by, or went swimming in the lovely pool and joined us later at lunchtime, whilst the majority of the group left at 7am, after an early breakfast, to be in the park by 7:30am just at it opened. 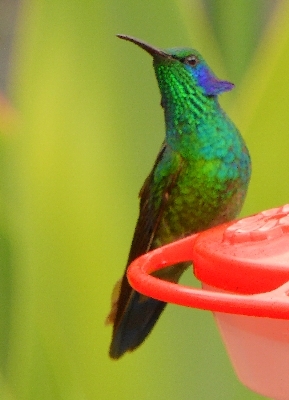 GREEN VIOLETEAR  at the feeder

It was quite hard going in the forest, birds were few and far between but there was plenty of other wildlife to be seen, not just birds! Roy showed us the white Ghost Bat which sits clinging to the underside of the leaves of the banana plants, we also continued to see large numbers of the GREEN PAGE MOTH or GREEN URANIA (Urania fulgens)  this very colourful green and black moth resembles very closely a swallowtail butterfly and has an extraordinary life and migration cycle. 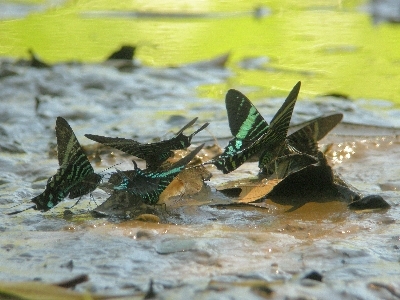 [Every 4 to 8 years, local populations will relocate en masse to another region. The spectacular migration is stimulated by the relationship this moth has to its host plant, the Liana (Omphalea sp.). This plant contains poisons to discourage animals from eating it. The green page moth caterpillar can tolerate this without dying, and these toxins are absorbed to help protect the caterpillar from predators. Over a few years, though, the Liana slowly increases the level of its poison until plant becomes too toxic for the caterpillars to eat, adult moths then begin a migration to a region where the Omphalea has a lower toxicity, this is usually an east-west and vica versa pathway. They leave in July or August and travel for several months. The following March, the moths will return to where their population began, we witnessed this migration as hundreds of moths trickled overhead all-day everyday, we often encountered the gathered masses on flowering Lianas just as evening roosting began,]

We also found a Ferdelance Snake ( Bothrops asper), this infamous viper’s high venom production and toxicity are paired with an active and edgy disposition, making it one of the most dangerous creatures one can encounter in Costa Rica. It is the most dangerous snake in Central America and causes the most snakebite-related deaths among humans in Costa Rica, so we gave it a lot of respect and took photographs from a safe distance!

Other wildlife seen was; Nine-banded Armadillo, White-faced Capuchin, Mantled-Howler Monkey, Spiny-tailed Iguana and Variegated Squirrel and about 30 species of birds, the best sightings of which were of Scarlet Macaw, encountered several times as noisy fly-overs, none were seen perched, Royal Flycatcher at it's nest, also Dot-winged Antwren, Long-billed Gnatcatcher, Barred Antshrike. White-whiskered Puffbird and Orange-collared Manakin. 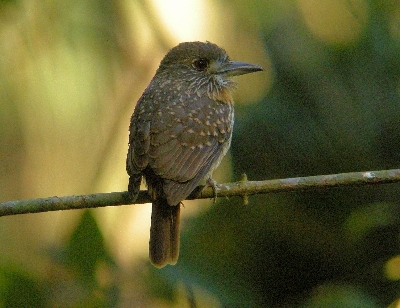 At lunchtime the bus picked us up at the entrance to the trail, the rest of the group were already onboard so we all went to lunch together at a tiny restaurant on the beach near Tarcoles. We then drove down to the mouth of the river where a number of companies offer river boat cruises, our cruise was booked for 2pm. 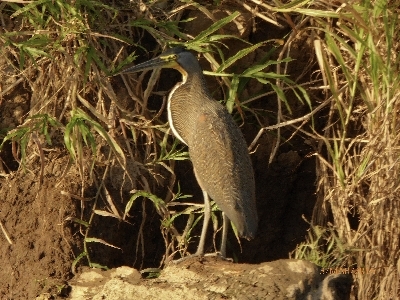 We had a marvelous relaxing time, nearly 3 hours of fantastic bird and wildlife watching, we saw just under 50 species of birds, amazing really. The trip took us upriver for a hour where large American Crocodiles sat on the muddy banks or drifted ominously by like floating logs. We saw the Turquoise-crowned Motmot at it's nest site which is a hole in the river bank just like the Kingfisher. 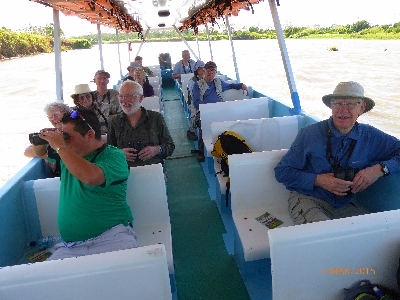 On board our river boat

A host of herons and egrets, ibis, storks, spoonbills, waders, cormorants, frigatebirds, raptors and passerines made this trip so memorable. The weather was perfect too, lovely sunshine, no wind just a lovely cooling breeze, the sunset was magical. 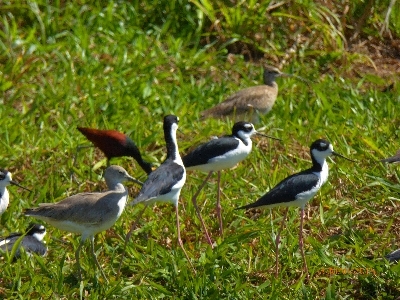 For the last hour or so we drifted into mangrove forest where narrow channels allowed us to get very close to a number of bird species, the American Pygmy Kingfisher sat motionless for us whilst Prothonatory Warbler and Mangrove Warbler (the red-headed version of Yellow Warbler) also showed well. Several Red-winged Blackbirds dashed by, several Ospreys sat perched as did Common Black-Hawk and a couple of Plumbeous Kites circled overhead. 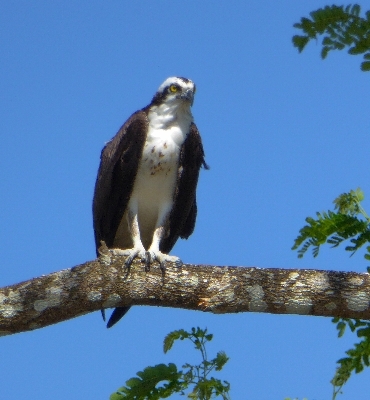 All in all we had a smashing trip, feedback from the group suggested that this was the tour highlight so far! We arrived back at the lodge in the dark around 6pm. A nice cold drink was enjoyed during a lovely dinner.