Our early morning walk began at 6am, it was another beautiful morning clear blue sky, light winds and a lovely temperature. Cerros Lodge sits on the backbone of a large peninsula that juts out into the Pacific Ocean with panoramic views into the Southern section of Nicoya Bay to the north and down over the river Tarcoles to the south. 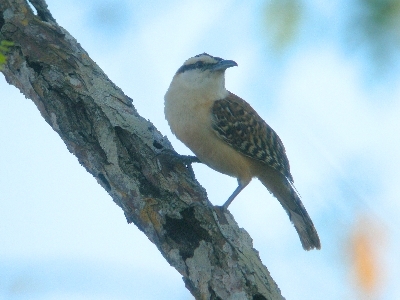 We walked along the central track which drops down to sea level from our vantage point of around 200 meters, it wasn’t long before we bumped into lots of feeding birds. Flycatchers were everywhere, we watched a couple of larger species, the Streaked and Nutting’s Flycatchers, as well as recording our first Rose-throated Becard. Roy heard a Striped Cuckoo but we couldn’t locate it then a Ferruginous Pygmy Owl showed well along with many other common species. 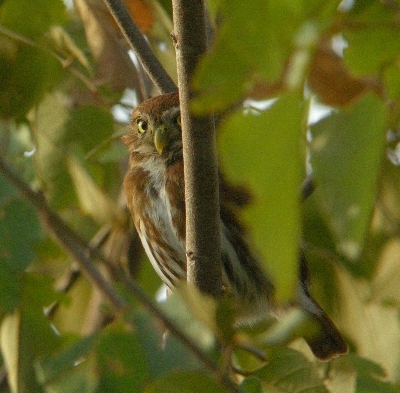 Further along the track we watched Striped-headed Sparrow and a pair of beautiful Black-headed Trogans and a single Violaceous Trogan, lots of Hoffman’s Woodpeckers searched the treetops for food whilst Scrub Euphonia and Orange-fronted Parakeets fed on fruit, several sightings were made of the huge and brightly coloured Scarlet Macaws, they looked exquisite in the morning light, how nice to see this species free-flying and not in a cage in a European “Bird World”. 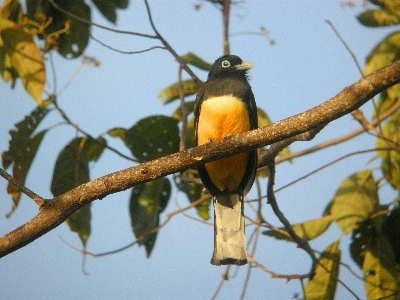 Packing and breakfast was completed by 8:15am and we were on the road soon after, we popped into Tarcoles for a couple of shopping chores and in doing so the group found the first Lineated Woodpecker of the tour. Our journey then took us northward on the main Pan-American Highway. We made a stop at Caldera where a bridge spans a large inlet and  where groups of birds either feed or roost on the surrounding sand-bars. Hundreds of Laughing were joined by Brown Pelicans, Royal Terns and a few waders. Not far from there we turned off the highway onto a side road which ran along a mangrove swamp and that is where we spent some time looking for new species.

A Panama Flycatcher was seen well by all of us, we also found lots of Yellow Warblers of the subspecies Erythachroides, which is often called the Mangrove Warbler, the male has a beautiful reddish-brown head colour. Other species seen included; Osprey and a fly-over Short-tailed Hawk.

Moving further north we drove for an hour or so before we turned eastward onto a track that led us to the coast and a large Shrimp Farm at Chomes. A large number of pools held varying amounts of water and supports many birds especially during high tide periods. We arrived during a low tide period but nevertheless there was a good number of birds roosting or feeding, we found several new species, a Black Skimmer sat with a number of Black-bellied Plovers, Least Sandpipers and Black-necked Stilts. Elsewhere we found a flock of Marbled Godwits, Western Sandpiper, Stilt Sandpiper, Whimbrel and a single Lesser Scaup.

Further exploration uncovered more pools where over 2000 Blue-winged Teal roosted, we picked out a couple of Northern Shoveler within the ranks of the teal, a Blue Grosbeak appeared in a pool-side bush. More waders egrets, herons and ibis sightings added to our enjoyment, a Long-billed Curlew, Caspian Tern and more of the same waders were found a little later just before we left.

The final leg of the journey was along dirt roads across countryside, farmland and open woodland, we stopped a few times to look at more pools, mangrove swamps and perched raptors. We saw Common Black-Hawk and our first Yellow-naped Parrots before arriving at dusk at Ensenada Lodge.

Ensenada Lodge is situated on the mainland coast of Nicoya Bay, the accommodation faces the bay giving wonderful panoramic views of the gardens and coastline, the sunsets from here are magical. We arrived just in time to see one before we got ready for dinner in the spacious open-plan restaurant. Our bird log total now exceeded 400 species with still more to come tomorrow! Another owl sighting was made by the few who stayed up after 10pm, a Pacific Screech-Owl showed well in excellent full-moon light.