Well what a disappointment today, despite a bright start the sky turned dark and it rained all day, nevertheless we still managed to see a good number of species...........

WEATHER:  Dry and sunny for an hour! Then rain all day.

Well what a turn up, the wind had dropped and at 6am it looked as though it was going to be a lovely day, however by 7am it clouded over and as we left in the bus at 8 it started to rain and it never stopped all day.

It took about an hour to get to our first destination, Braulio Carillo National Park, this hugh area of rain forest is up in the clouds and today it was dull, misty and very wet. We parked in a small sub-entrance to the park and found shelter on the veranda of a disused dwelling where we could see out over a clearing which was once a garden, many flowering plants were growing there. 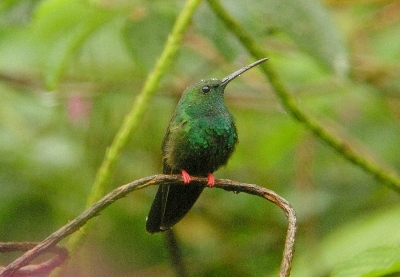 A Buff-rumped Warbler flitted about near the far end of the veranda and despite the rain Hummingbirds began to appear, in fact we had a very nice hour watching several species which included the diminutive Snowcap (female), other species included: Rufous-tailed Hummingbird, Bronze-tailed Plumeleteer and Green Thorntail.

Not too many other birds were seen for obvious reasons, we decided not to go walking in the Rain Forest and stood on the veranda watching Silver-throated Tanager, Bananaquit, Chestnut-sided Warbler and Tropical Kingbird.

Then Roy pulled off a master-stroke, he called a friend who lives locally and who has a bird hide in his garden, he agreed to let us use it, so off we went down into the valley on the Caribbean side of the national park. The bird hide was fantastic, we could all fit in nicely and ‘Cope’ the owner had put hummer feeders and fruit out for the birds. Despite the dull light and the rain the photographers in the group were in heaven. 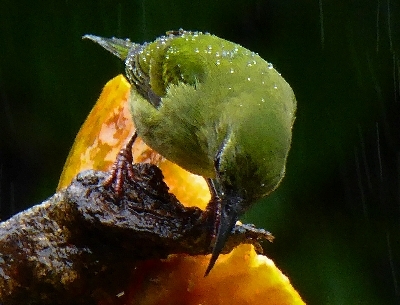 Several species of hummers came to feed including the Long-billed Hermit, also a variety of tanagers, two species of

Oropendola, the Montezuma looking magnificent at close range. There was also rice put out on the ground and this attracted the elusive Grey-necked Wood-Rail, we had unbelievable views of that beauty. 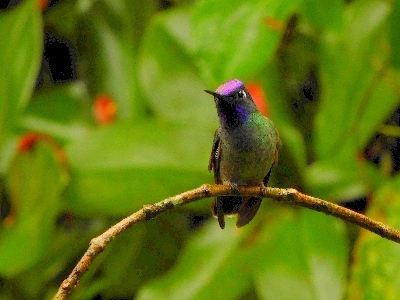 Also in the garden we saw Wood Thrush and a Wood-Rail sitting on eggs, Cope knew his local area very well and offered to take us for a walk to look for Owls. The rain had eased a little but it never stopped, we were all well kitted out in water-proofs and boots.

It took us a while but we saw up to three Spectacled Owls, a Fasciated Heron on the river, also a Broad-billed Motmot and a roosting Great Potoo. In the tree tops we saw more Oropendolas, Black-billed Toucan and not much else. 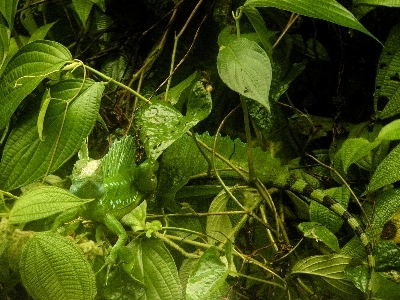 its very hard to see but there is a Green Basilik Lizard here, AKA JESUS CHRIST LIZARD

We went off to lunch to a roadside restaurant and for the last 3 hours of day light ‘Cope’ took us to another area of forest to look for Crested Owls. The forest was found along a track some 10 kilometers long and all along it we  made several stops to look at perched birds. Again we logged some nice species but failed to see the owl. The highlights of our sightings were Yellow-crowned Euphonia, Variable Seedeater, Roadside Hawk and Yellow-bellied Flycatcher. 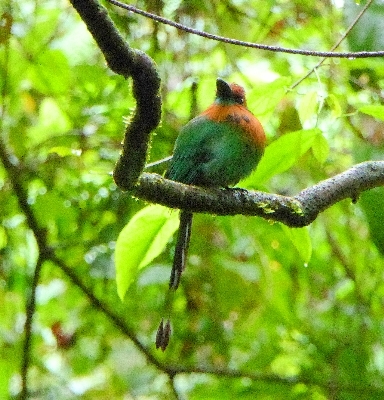 In the forest we walked a couple of trails without seeing much and throughout our walk  we endured persistent rain, eventually we gave up and returned to the bus. Our journey back along the track to the main road was lengthened by several stops, we found Green Heron, Southern Lapwing and Grey-capped Flycatcher.

We arrived at the Selva Verde lodge at 6pm and after a short settling-in period we went to dinner in the impressive dining hall.