It's goodbye to Selva Verde as we travel to higher elevations for our 2 day visit to Rancho Naturalista.........

There was no official pre-breakfast walk arranged today but some of the group went to the river to look for the SUBBITTERN again. They were rewarded with great views of it and one lucky couple had the bird land within 5 meters of them. Other species seen along the river were Spotted Sandpiper, Buff-rumped Warbler, Fasciated Tiger-Heron and an Anhinga. Flocks of egrets flew over as they left a nearby roost.

By 8am we were all packed, breakfast was over and we set off for our next destination, Rancho Naturalista some 3 hours away. But first we planned to stop at Braulio Corillo to walk the forest trail that we abandoned a few days ago due to the heavy rain. Along the way to Braulio we made a quick stop to look for Nicaraguan Seed-Finch in some open grassland, the Finch didn’t show but we added Eastern Wood-Pewee, Bare-necked Tiger-Heron and Groove-billed Ani to our list and we saw a number of other species including a fly-over Crested Caracara. 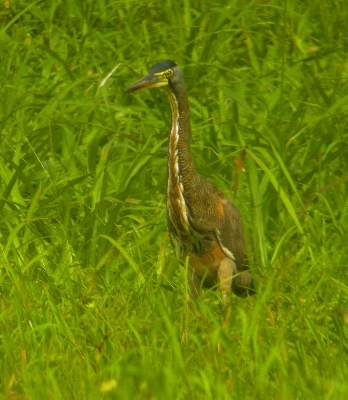 We arrived at Braulio in bright sunshine, we parked at a private entrance where a well-tended garden held many flowering plants, this attracted many ‘hummers’ to our great delight, no new species but good views of several we recognised. 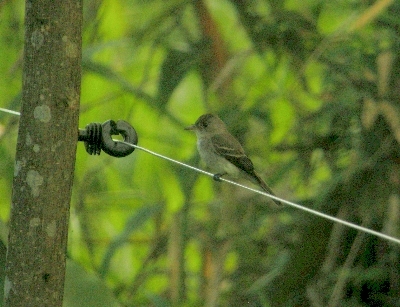 The forest walk was hard going, a bit muddy and it had many natural obstacles  like fallen trees and steep, muddy steps in places. We were rewarded for our efforts with sightings of a LATTICE-TAILED TROGON, this beautiful bird has a restricted range so we were lucky to see it. We then found a feeding flock high up in the canopy, a number of tanagers included Emerald and Tawny-crested, we also Tawny-capped Euphonia and White-theoated Shrike-Tanager for the first time.

From then on sightings were few and far between until Roy found another feeding flock, he called out “Sharpbill, Sharpbill” and got very excited, but unfortunately only he could see it, what a pity this was a rare sighting indeed! We did see Tennessee Warbler, Chestnut-sided Warbler, Green Honeycreeper, Olive-backed Euphoria and some tanagers, but not the Sharpbill. 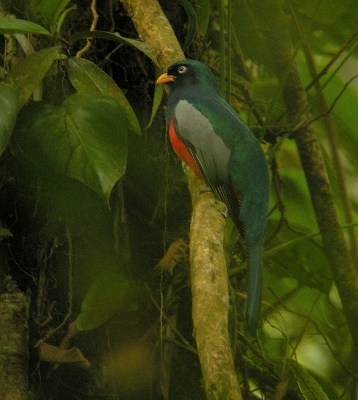 Other species of note were few, White-Ruffed Manakin, Lesser Greenlet and Black Mandibled Toucan  come to mind but not much else. Back at the garden where the bus was parked we found a Black-crested Coquette, a great little ‘hummer’ to finish off our morning.

We had a lovely lunch at a roadside restaurant and by 2pm we were on the road again heading for Rancho, the journey took a further 2 ½ hours, we passed through some lovely countryside as we climbed to about 1000 meters.

Rancho is situated high up in the hills along a 3km steep track – I’m glad we weren’t walking!

It was around 4:30pm when we all assembled on the famous Rancho ‘veranda’, the ‘hummer’ feeders were still busy and the garden held a number of flowering plants which were also being visited by hummers, it was on these flowers that a male SNOWCAP was found, what beauty that bird is. We also saw Green-breasted Mango, Crowned Woodnymph, White-necked Jacobin and Green Thorntail.

Dinner was served early at 6pm on the terrace, we had a lovely relaxing evening, some of the group went out later  looking for a Mottled Owl.