Our last morning at Rancho was spent down in the valley where we had an excellent time walking a track alongside of a river.

We made an earlier start than usual today because we wanted to view the moth trap and any birds that may come in to eat the moths that remain near the lamp or on the white-sheet below the lamp. We met at 5:30am and after a quick cuppa we walked to the moth-lamp and waited for the birds to arrive which wasn’t for long.

Today we were joined by Cali a local guide and a friend of Roy, he was going to take us later to his local patch.

The first few birds to arrive were Woodcreepers, we saw Plain, Streak-headed and Cocoa, then a pair of White-breasted Wood-Wrens came into view. Over the next hour we had a wonderful time watching many species jumping into the light ‘arena’ to catch a moth or two. Some good sightings included: Plain Antwren, Tawny-chested Flycatcher, Kentucky Warbler, Olive-striped Flycatcher, Buff-throated Foliage-Gleaner and a host of other species, It was quite a morning. 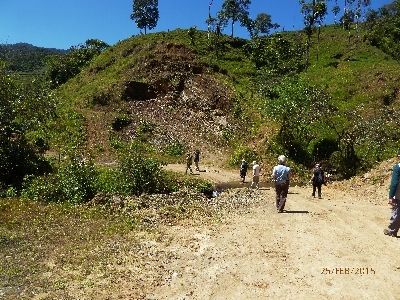 walking the track near Montane Silencia

Breakfast was over by 8am and we were driven down the long access road to the main road, after a couple of kilometers we turned into a side road and followed this up into a valley which rose along the slopes of  the ‘Mountain of Silence’.

We began birding on the track and within minutes we saw a good variety of species including several tanagers, also Scarlet-thighed Dacnis, Green Honeycreeper, Paltry Tyrannulet, flycatchers and many common birds. 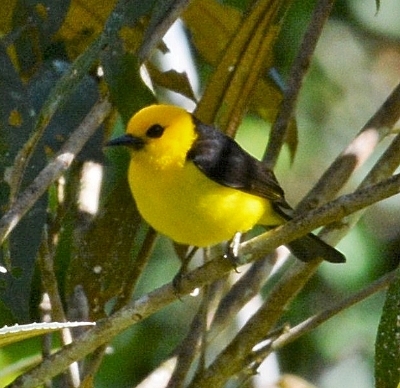 We had excellent views of a couple of ‘new’ tanagers, the Black and Yellow is a stunner but so is the Emerald and the Speckled, Bay-headed and the Golden-hooded. A little further along the track we had views of the river below us where we saw Torrent Tyrannulet, Black Phoebe and a small flock of Tawny-crested Tanagers.

Other species were found in the surrounding open meadows and the forest edge on the far bank of the river, we saw Tropical Parula, Black Headed Tityra, Grey-capped Flycatcher, a beautiful Swallowtail Kite flew over and many Oropendolas flew back and forth to their large pendulous nests.

We returned to Rancho at lunchtime, packed our bags and after another nice lunch on the terrace we said goodbye to the staff and to Cali, then we boarded the bus for the journey to Tapanti our next destination. The trip was due to take a couple of hours but we had one scheduled stop at a large lake along the way.

The lake stop proved to be a good move we saw a good number of water birds as we walked along a section of the shore through a mature woodland. The lake is situated in the grounds of a large up-market spa-hotel with open pastures and well attended gardens. We had a great time listing a lot of water birds and a few woodland species. The middle of the lake was littered with rafts of Lesser Scaup whilst the nearer the shore in the masses of water lilies we found Blue-winged Teal, Northern Jacana, Purple Gallinule, American Coot, Neotropic Cormorant, Anhinga and a single Limpkin.

A  Snail Kite showed well for us, as did a Keel-billed Toucan, our first Yellow-bellied Elaenia and a small flock of Collared Aracari. Soon it was time to go we boarded the bus to continue our journey which took us through some lovely countryside and passed vast fields of sugar cane which was being harvested.

We made a couple of short stops to look at birds, one stop was to watch a Roadside Hawk sitting on the grass-verge next to the road, doing exactly what it says on the tin. We arrived at Kiri Lodge just before dark, we had time to settle in before sitting down to a lovely meal of fresh trout, it have been fresher as Kiri Lodge is also a trout farm!