We transferred from Orosi to Savegre with excitement all day on the birding front, a good morning and a fantastic afternoon.............

Weather: dull overcast to start, sunshine and cloud most of the day with some rain later.

A big change in the morning's weather, today it was cloudy with light rain, this put off several of the group from going out early and the attendance for our early morning excursion was somewhat depleted, most stayed in bed whilst four of us joined Johan our guide on a trek up to the Presa de Orosi track. Despite bad light and drizzling rain we found many birds although it took some time to find the first one. New birds for the list were: Brown-capped Vireo, White-naped Brush-Finch,  and two real goodies, the Black-bellied Hummingbird and an Eye-ringed Flatbill. 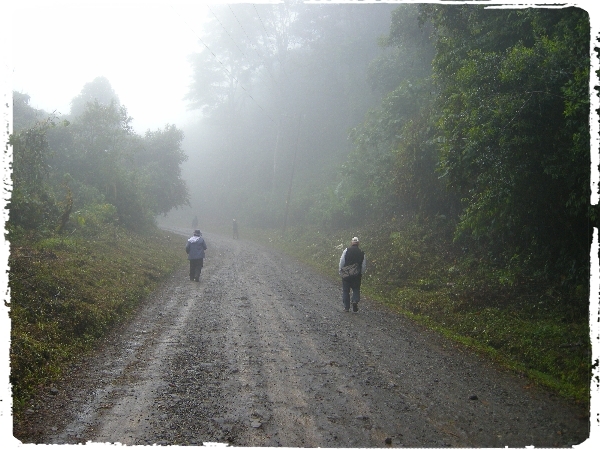 despite the misty weather birding was very good this morning

After breakfast we set off for the long drive to our next destination, the Savegre Hotel found high in the ‘Central Cordillera’ mountain range but first we made our second stop at Ujarras to look for the Prevost’s Ground Sparrow.

Unfortunately for us the Ground-Sparrow showed all but very briefly to our guide, but in our endeavour to see one we found several other birds for our list. We also found an Indigo Bunting, a beautiful male and a drab looking female, we also saw Variable Seedeater, Yellow-faced Grassquit, Rufous Collared Sparrow, Ruddy Ground-Dove, Philadelphia Vireo and a rare hummer Blue-chested Goldentail. 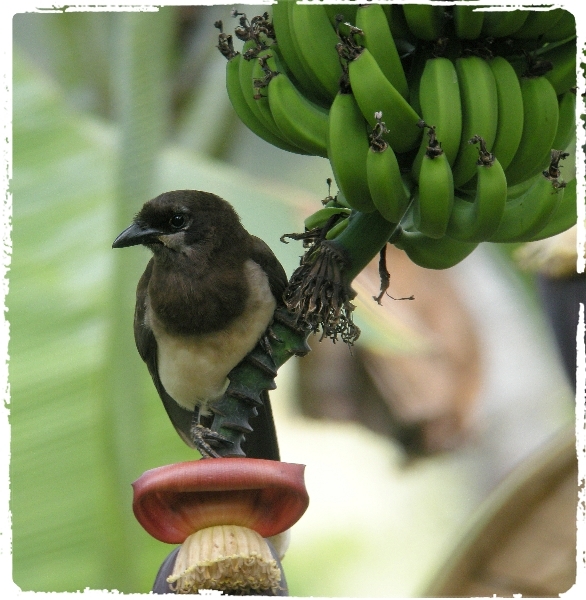 After about an hour we gave up as time was pressing, so we continued to Savegre, passing through Cartago and then our route seemed to be climbing forever until we leveled out at 2,500 meters about 8,000 ft. above sea-level. It was a lot cooler when we got out of the bus some 2hrs later. Lunch was eaten in a roadside restaurant, we saw Wilson’s Warbler and Rufous-collared Sparrow in the gardens.

For the afternoon we planned to bird this high elevation habitat which holds a completely new set of bird species and gives us an exciting prospect of seeing the wonderful Resplendent Quetzal.

We drove a short distance and turned off the highway (Pan-American Highway) onto to a dirt road, after about 1km we stopped and disembarked for our birding walk. Typically it started to rain just as we got off the bus, it was light rain which came and went over the next couple of hours and didn’t spoil our birding.

We had the most incredible afternoon’s birding, it was the best session of the trip by far, it was one of those episodes when everything went right and all the target birds turned up on cue. We couldn’t believe it! First we stopped at a place where Johan knew of a nesting pair of Quetzals, he showed us the hole but no birds were present, however we did see a Timberline Wren which flew across the track and landed in full view, this was quickly followed by sightings of Sooty-capped Chlorospingus, Black-billed Nightingale-Thrush and Fiery-throated Hummingbird, wow what a start. 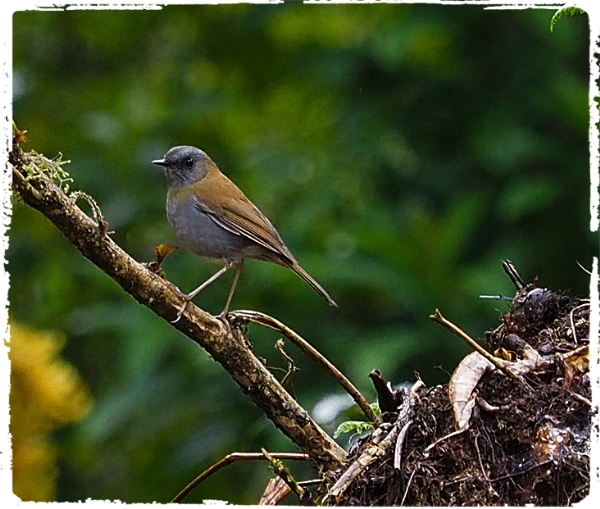 Then as we walked on a call of ‘Quetzal’ went out and we were soon back watching a pair around the nest hole, eventually the male went inside whilst his trailing tail feathers hung out of the hole. Fantastic, our most wanted species was in the bag and what joy they brought to the group. 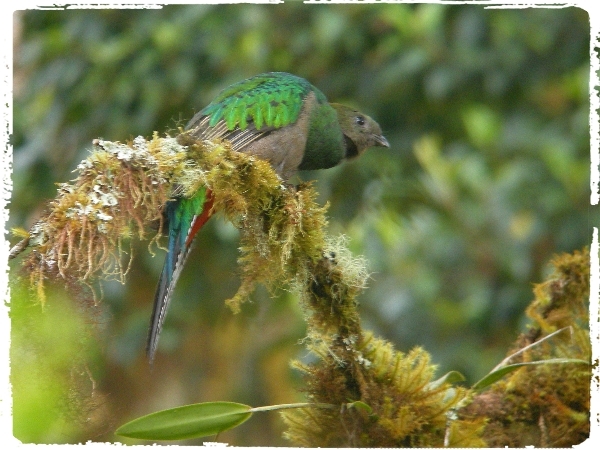 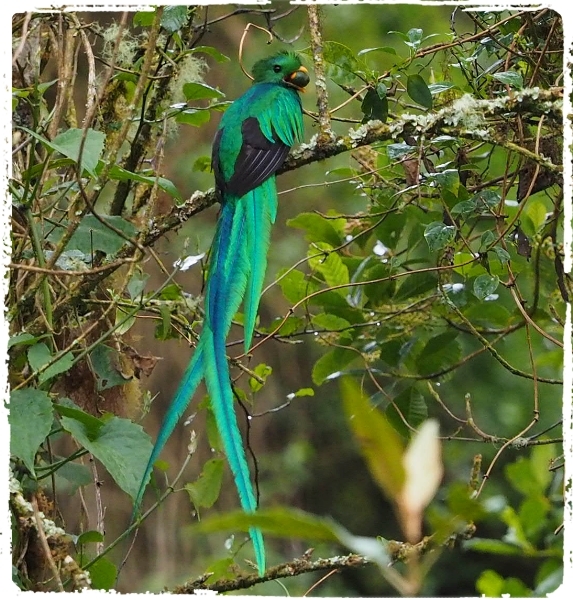 The afternoon just carried on in that vein we amassed a great list of species, the rain stopped and the sun came out, so did so many exceptional sightings. How about this for a list:  Volcano Hummingbird, Band-tailed Pigeon, Barred Parakeet, Collared Redstart, Slaty Flowerpiercer, Resplendent Quetzal, Sooty Thrush, Flame-throated Warbler, Greenish Eleania, Yellow-winged Vireo, Long-tailed Silky-Flycatcher, Black-cheeked Warbler, Black-capped Flycatcher, Ruddy Treerunner, Yellow-thighed Finch and Yellowish Flycatcher. All these were new for our list and lifers for most of the group.  We even got views of Silvery-fronted Tapaculo, how amazing was that? 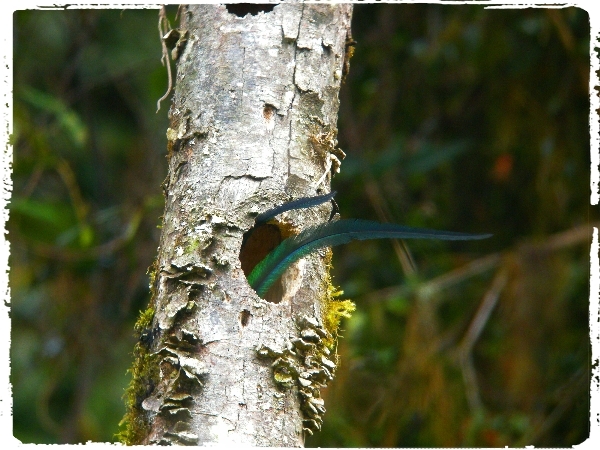 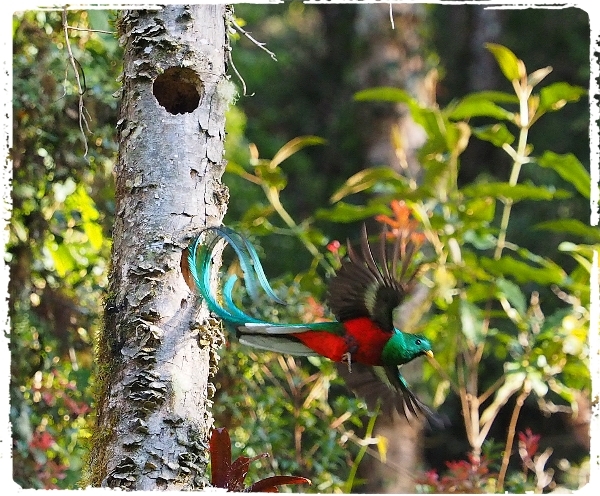 Another first was to actually see Barred Parakeets perched, it was amazing and a sight our guide Johan had never seen before, these tiny birds usually just scream overhead in small flocks and never seem to land!

Well we finally had to leave, our final sightings were of the Long-tailed Silky-Flycatchers a fitting ending to a marvellous afternoon. We had a 45 minute drive to the hotel Savegre and we arrived just as it was getting dark around 6pm. It had been another long day  in this wonderful birding Hotspot called Costa Rica.