Our longest transfer yet but we stopped several times and as we climbed into the Central Cordillera mountain range we began to see a new set of species...........

Another glorious morning at Tapanti, cloudless sky, a little chilly but dry! We drove to the entrance to the park and walked back down the track from where we had come. The birding was slow for a while but it picked a little, the highlights were: good views of both Speckled and Spangle-cheeked Tanagers and we spent some time trying to coax an Immaculate Antbird into view, it was hard going looking through a small gap in the trees and only a few of the group saw it. Our only other new sighting was of a Brown-capped Vireo.

After breakfast we set off for the long drive to our next destination, the Sevegre Hotel found high in the ‘Central Cordillera’ mountain range but first we made a stop at Ujarras to look for the White-eared Ground Sparrow. The habitat was not what we expected, large fields of vine-like plants were producing large Squash Fruits, the vines grew over a lattice work of wires about 2 meters off the ground, below the vines a micro-habitat of ground weeds was supported, this is where we looked for the sparrow.

Unfortunately for us the Ground-Sparrow failed to show but in our endeavour to see one we found Lesser Goldfinch, a great bird for our list, the male was stunning. We also found an Indigo Bunting, not the beautiful male but a drab looking female, also Variable Seedeater, Blue-Black Grassquit, Rufous Collared Sparrow and Ruddy Ground-Dove made up some of the supporting cast. 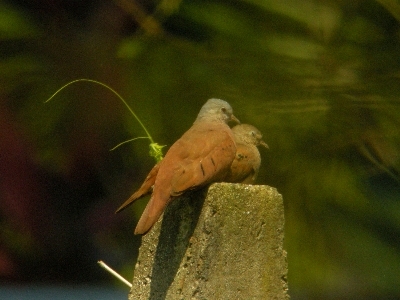 We continued to Sevegre after about an hour, our journey took us up into the clouds, this high elevation habitat holds a completely new set of bird species and giving us an exciting prospect of seeing the wonderful Resplendent Quetzal. The journey took over 3 hours because we had to make a long detour as one of the main roads was closed due to a landslide. So we arrived in time for a late lunch before we began to start birding. 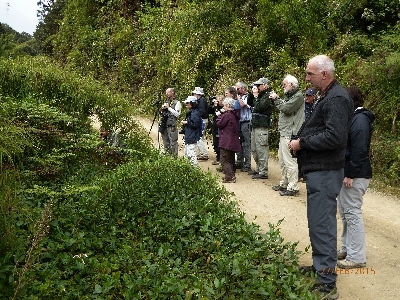 Our birding began around 3:30pm along a wide track along the ridge of the mountain range, it was quite chilly in the clouds and light varied from good to very bad, a nightmare for photography! However despite the poor light conditions we saw many of our target species. Hummingbirds were the highlight with Volcano and Fiery-billed showing well at times, we also saw Scintillant, Magnificent and Green Violetear. Better was to come when we coaxed out a Timberline Wren, then we found Sooty-capped Bush Tanager, Black-capped Flycatcher, Sooty Thrush and best of all Long-tailed Silky-Flycatcher. Wow, it will be hard to follow those sightings, but we did. 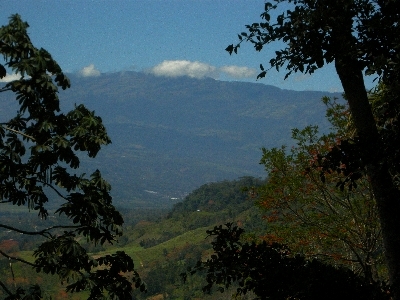 one of Costa Rica's smouldering vulcanos

Back on the bus we had 13 kilometers to go to reach the hotel, most of this was downhill into the Sevegre valley, it was a very steep and winding road but we made a couple of stops to look at roadside birds. A Sooty Thrush sat on a fence then we found 4 Long-tailed Silky Flycatchers, followed by Collared Flycatcher, Black-capped Flycatcher and Band-tailed Pigeons. Another stop produced Large-footed Finch, Flame-coloured Tanager and more Sooty-capped Bush-Tanagers, phew it was smashing birding!

At the bottom of the valley, Johan our guide, knew of a fruiting avocado tree so we pulled over and got out to search for the Quetzal as avocados are its favourite fruit. Within five minutes a beautiful male RESPLENDENT QUETZAL flew into the tree, fantastic, the light was too dull for good photography , but what a super bird.

Well that got the bus buzzing as we finished the last few kilometers, guess what bird-of-the-day was? Dinner was taken at 7:30pm then we had a relaxing drink in the lounge as we went through the sightings list.