Our first day of this exciting tour was spent travelling, we had so many delays once we arrived at San Jose that it was dark by the time we got to the hotel! But our second day produced some fantastic birds after a slow start.

Sunny, warm but a little windy all day.

We arrived in San Jose after a nice steady flight and a smooth connection at Madrid, however once on the ground things slowed up, it took 30 minutes to get through security and we waited nearly an hour for our luggage. Once outside the terminal we met up with Ken and Carlene an Australian couple who made up the rest the group. Once on the bus we were delayed getting out of the car park because the exit barriers we out of order, then we hit mega traffic around Sa Jose. It was dark when we got to our hotel and too late for birding. Not a great start!

We ate a lovely dinner and began to relax, our bird log consisted of three species, Turkey Vulture, Great-tailed Grackle and Palm Tanager, even an after dinner owl-prowl produced nothing except for an unidentified frog!

WEATHER:  Dry and sunny for most of the day, cloudy later with a threat of rain.

At 6am we  gathered in the garden for our pre-breakfast walk and to meet Johan our guide for the first time. A nice bright morning greeted us as we ventured into the beautiful grounds and immediately we started listing our first Costa Rican birds. The drab looking Clay-colored Thrush was one-of the first and is Costa Rica's National Bird, chosen for its melodic renditions not its looks. Red-billed Pigeon, Grayish Saltator, Baltimore Oriole and several other common species were soon in the notebook. 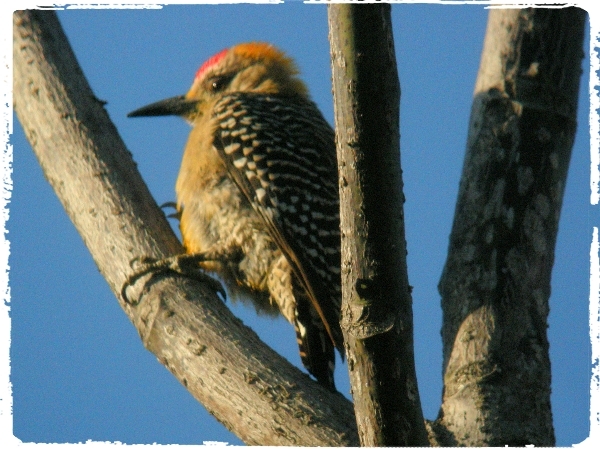 After an hour we had a sizeable list with some nice species, everyone loved the Squirrel Cuckoo which showed very well, also the Hoffman’s Woodpecker and the Ruddy-capped Warbler. A couple of migrant species included Tennessee Warbler and Philadelphia Vireo and our only ‘hummer’ was the Rufous-tailed Hummingbird.

Our last species of the walk was seen as we were leaving the garden, it was a beauty, we had extremely close views of a Yellow-throated Vireo that came to within a meter of us as it fed in low scrub. 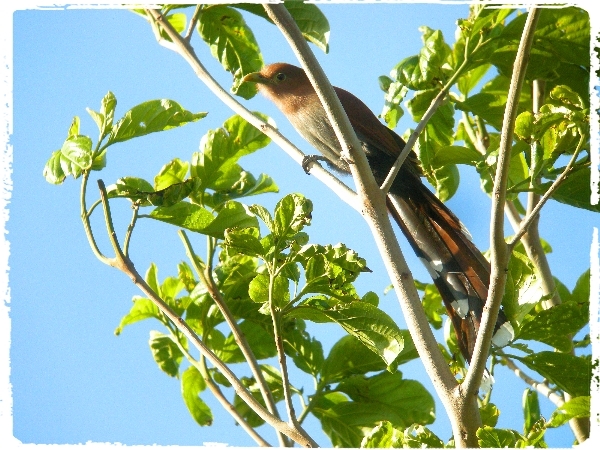 After breakfast we loaded up the bus and set off for the Caribbean Slopes via the forested mountains and Braulio Carillo national Park. A short stop near the hotel was made to look for  ‘ground-sparrows’ but produced nothing.

Braulio Carillo National Park was our morning’s destination, we had high hopes of seeing many new species because of the good reputation this forest park holds. However we were very disappointed, after spending a couple of hours walking the ‘sendero las Palmas’ we saw exactly, one bird. The habitat is wonderful and we did hear quite a few species but we failed to bump into a mixed feeding flock of any description. Nevertheless the group remained buoyant as we embarked on a walk of a second trail. At the start of the trail in the car park we found a few tanager species, Silver-throated, Palm, Golden-hooded and Black-and-Yellow. But again the walk failed to turn up much, Long-billed Gnatwren, White-breasted Wood-Wren, Whiskered Puffbird and not much else. From a bridge near the car park we scanned the river below and came up with Louisiana Waterthrush, not a bad bird  to finish the morning with. 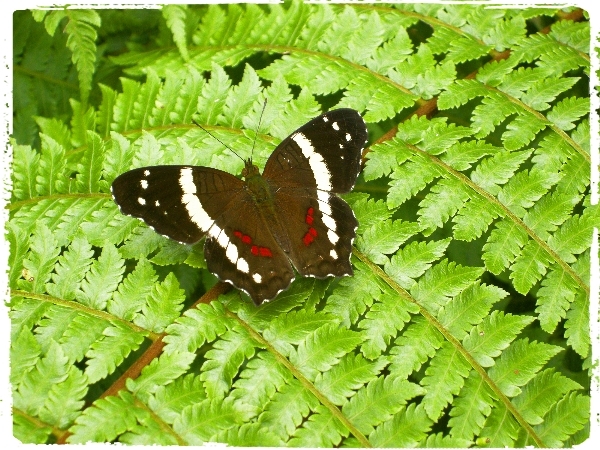 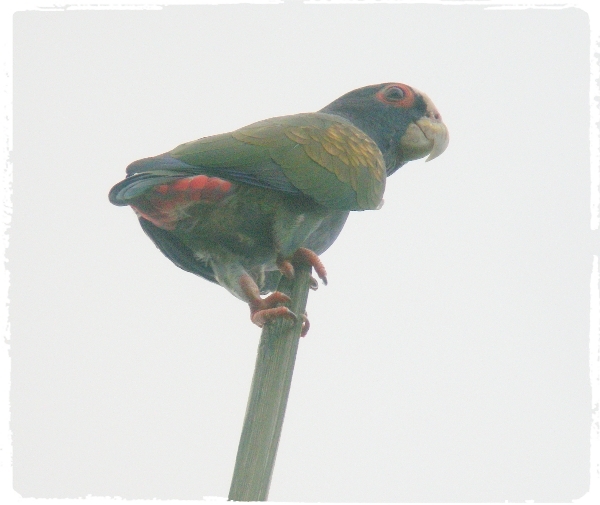 From the park we drove down the forested mountainside to the Caribbean side of the country, we took lunch at a roadside cantina, which was enjoyed by all, we added Montezuma’s Oropendula and House Sparrow to our list during lunch.

For the afternoon we planned to visit some open areas near to La Union, a small village about 15km up the road, our guide knew of a roosting Crested Owl site. Once off the main road we stopped to watch several new species, which included Grey-capped Yellowthroat, Red-breasted (Meadowlark) Blackbird, Blue and White Swallow, Variable Seed-eater, Black-mandibled Toucan, White-crowned Parrot and Great Kiskadee. 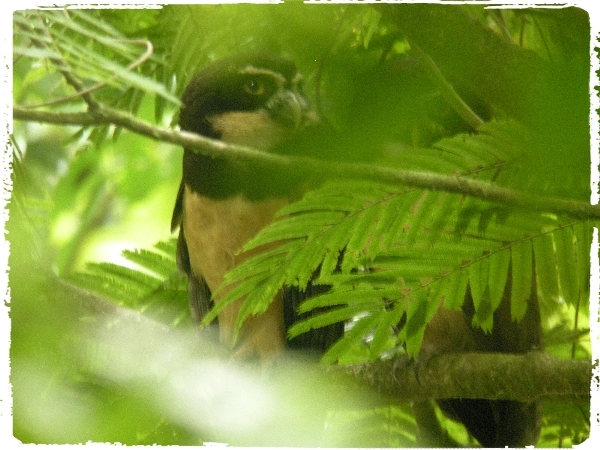 There were two Crested Owls showing at the site when we arrived, excellent, we left them undisturbed and this set the pattern for the rest of the afternoon, Johan took us to several sites to look for various species which luckily happened to be where they should have been and we added a few more species into the bargain.

So on that theme we went next to another wood to see Spectacled Owl, again two were showing well, we added Broad-winged Hawk, a good sighting because we watched it dive down to a rocky stream where it snatched a frog from a rock and it perched nearby to eat it. We also found our first Chestnut-sided Warbler and a couple more Black-mandibled Toucans. 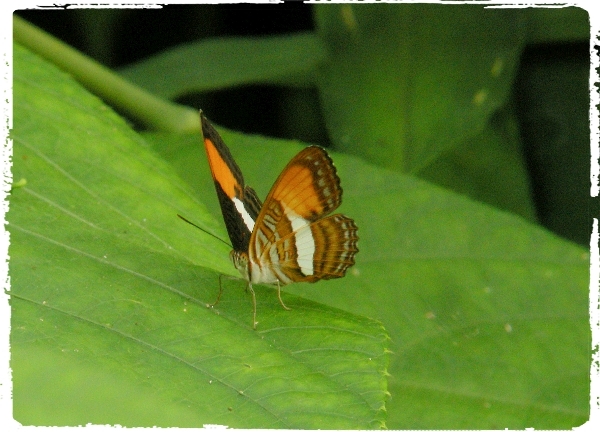 Nicaraguan Seed-Finch was our next target species, we parked beside some large grassland and within a couple of minutes we had one in bag, marvellous, what a huge bill! The same thing happened with Great Potoo, the bird sat in a dead tree over a busy track, amazingly it managed to sleep the whole time we were there whilst heavy trucks went passed.

Our last target bird was a little harder to find but we had plenty of other birds to keep us occupied, in fact we managed to see another 20 species during the last two hours of daylight. We parked along a track where open grazing fields supported gigantic White Almond Trees, the preferred nesting and food species for the Great Green Macaw. Whilst we searched the area we found, Grey-capped Flycatcher, Olive-throated Parakeet, Red-lored Parrot, a pair of Bat Falcons, both Chestnut-headed and Montezuma’s Oropendulas, Ruddy Ground Dove, Grey-rumped Swift, Masked Tityra, Boat-billed Flycatcher and several more. Our only view of the Macaws was a pair seen in the distance flying passed. 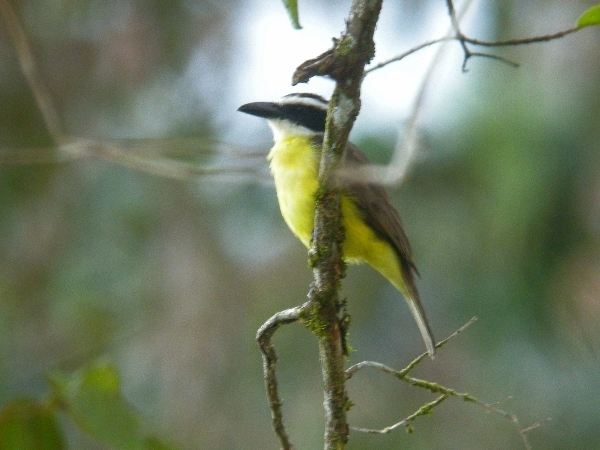 The light began to fade as the clouds gathered and thickened, it looked like rain was imminent so we gave up for the day. Luckily the afternoon was so good that it made up for the poor start in the morning. We ended up listing 72 species and 23 butterflies.