Our transfer from the highlands to mid-level elevation on the Pacific Slopes produced a rapid drop in elevation and a rapid increase in temperature plus many new birds..........

It was a beautiful morning clear blue sky and no wind, what a joy. We walked into the woodland next to the hotel complex to search for Spotted Wood-Quail with resounding success, two birds came to within a few meters of us, amazing! Next we set off along a track that ran along the side of a stream, we searched for Scaled Antpitta without success but we did find Buff-fronted Quail-Dove a super bird to see. As we headed back to the hotel Johan our guide called out Black-thighed Grosbeak but the bird flew off before the rest of the group saw it. 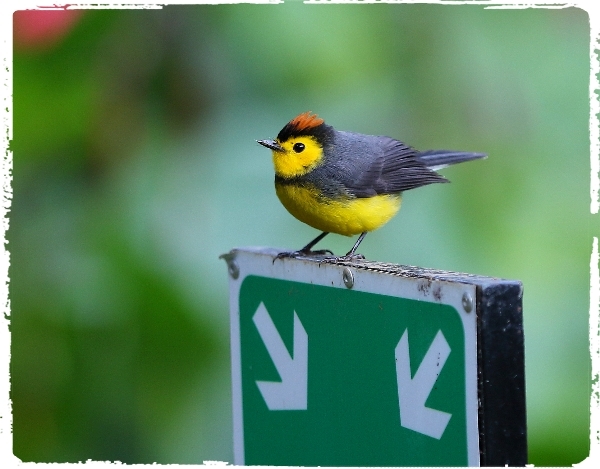 After breakfast we packed our bags, boarded the bus and set off out of the Savegre Valley, we were sorry to leave such a wonderful place. We climbed up out of the valley and headed westward on the main Pan-American Highway the road climbed still further until we reached a height of just over 3400 meters, we were above the clouds as we turned off the road onto a track into the ‘Paramo’, a unique tree-less habitat that survives in a very harsh environment, it is usually very cold, wet and cloudy, but today it was clear, sunny and warm. 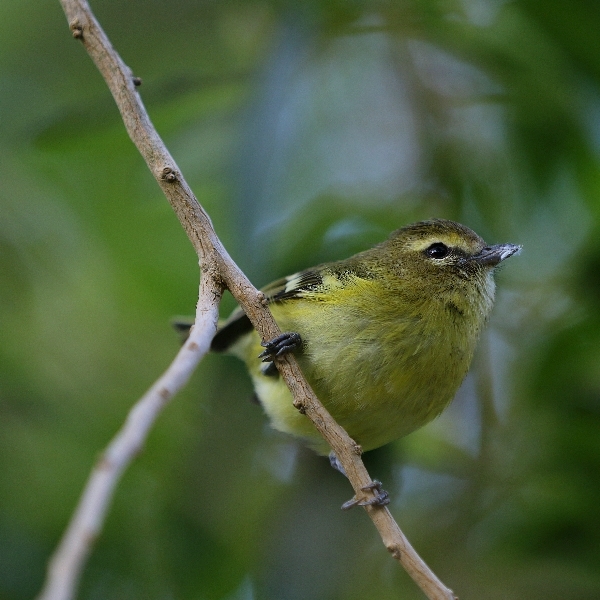 another of Tim's pictures - the Regional endemic Yellow-winged Vireo

Our target bird  was the Volcano Junco and once out of the bus it took all of 5 minutes to find one, in fact we found three! They we very obliging and allowed us to get very close but they would not keep still enough for a digiscope photo! 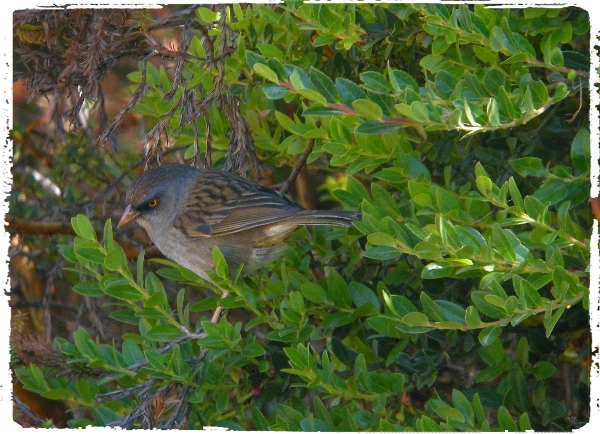 From the ‘paramo’ we started to descend into the Pacific Slopes as we got lower in altitude so the temperature rose and cloud cover increased. We next stopped at a small garden reserve, called Bosque de Tolomuca, a small B&B is well established there in lovely gardens which also had woodland trails and lots of bird feeders. We listed a number of ‘hummers’ including the Snowy-bellied Hummingbird and the Green-crowned Brilliant which were new for us. It was a wonderful place, the sun came out and the temperature rose significantly as we ate our picnic lunch on the terrace. 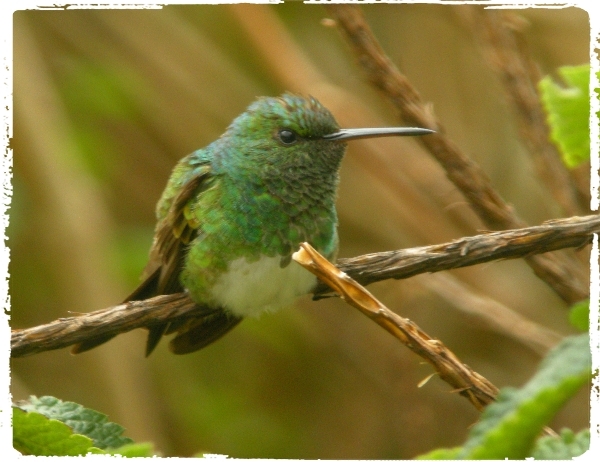 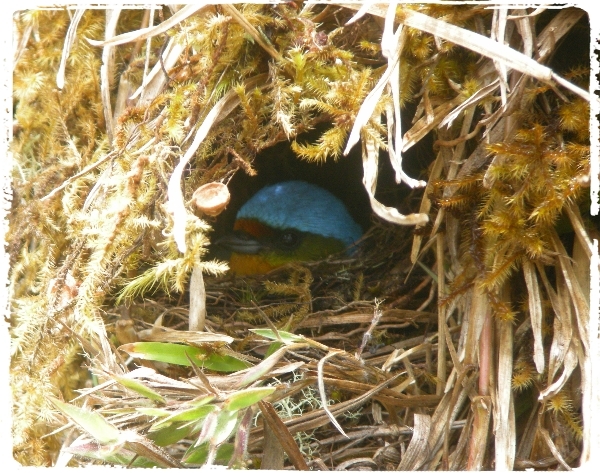 We stayed a couple of hours hoping to see a White-crested Coquette but it didn’t show, we did find an Elegant Euphonia sitting on a nest and the exquisite male nearby.  A stunning male Red-headed Barbet turned up at the feeders, wow what a great looking species. A supporting cast of Swallow-tailed Kite, Cherrie’s Tanager, Baltimore Oriole, Chestnut-capped and White-naped Brush-Finches and many common species made up for a great couple of hour’s birding. 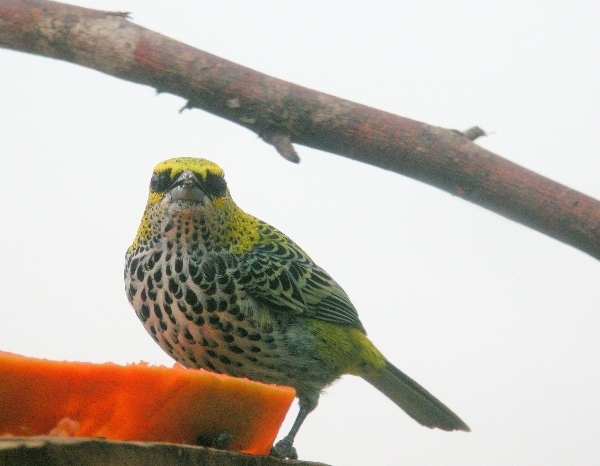 one of the most striking Tanagers - Speckled Tanager

Moving on we continued our descent to a level of around 800 meters, along the way a Fiery-billed Aracari nearly flew into the front of the bus! We passed through San Isidro and into the countryside to the south of the town. Johan led us to a number sites where open meadows and farmland dominated the flat landscape. It was very warm and dry there but the birding was good we added quite a few species to our trip tally, these included Fork-tailed Flycatcher, Yellow-headed Caracara, Smooth-billed Ani, Red-crowned Woodpecker and one very special bird, the Turquoise Cotinga! This was a superb find, a male too, it posed at the top of a dead tree in full view, fantastic. 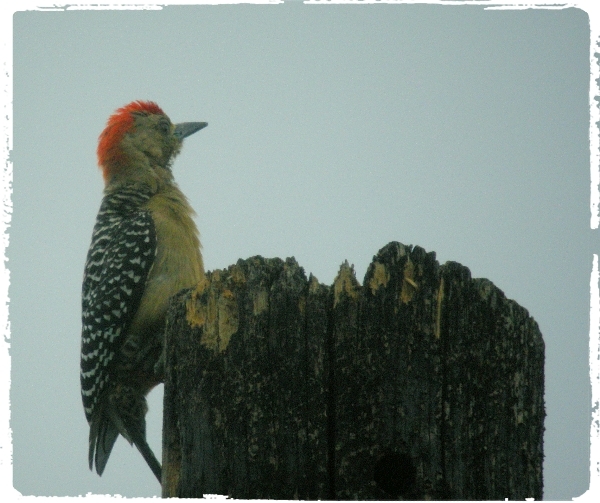 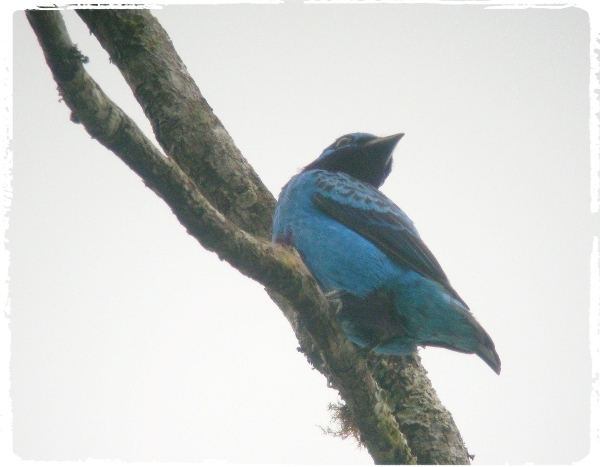 From there we drove the short distance onto the grounds of Talari lodge, where we were staying for the one night.  Talari is a  superb little lodge that sits in secondary woodland and protects just 20 hectares but it is a birding hotspot that has been a regular venue for birding groups for many years. Several regional endemics are regularly recorded, in the past Wingspan Tours have had great results in the grounds. 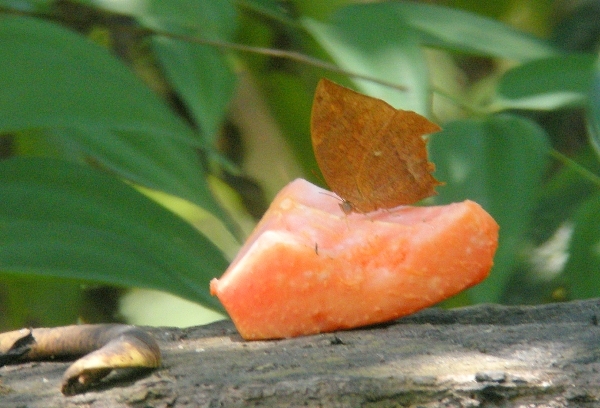 After a short settling in period during which we had a heavy down pour of rain we set off for a walk along the many woodland trails. We then heard another target species calling, we tracked it down to a nearby bush and had brief views of an Orange-billed Nightingale-Thrush, superb birding, a great sightings in just five minutes.

During the remaining two hours of daylight we walked to an open area by the swimming pool that overlooked a river and an area of dry forest we had a productive hour standing there with a number of sightings: Yellow-crowned Euphonia, Dusky-capped Flycatcher, Common Tody-Flycatcher, Streaked Saltator, Green Honeycreeper, Red-legged Honeycreeper, Cherrie’s Tanager and lots more.

We headed off on a couple of woodland trails and our walk finished in the  dining room of the lodge, this huge open-plan ‘platform’  had wonderful panoramic views over the gardens which fell away along the slope. The gardens themselves are usually a blaze of colour with many flowering plants and trees but this year it wasn’t the case, it had been too dry!

A Riverside Wren and a Rufous-breasted Wren were superb finds as was an Olivaceous Piculet. Swarms of Costa Rican Swifts were seen high in the sky along with both Barn and Blue & White Swallows.

A short  ‘Owl-prowl’ before dinner didn’t produce any sightings but we did hear Tropical Screech Owl and a Common Pauraque. Dinner was served at 7pm which went down well with a couple of cold beers. The bird log was called but we were finished by 8:30pm so most of us went off to bed. Our trip tally is steadily rising we now have 348 species, tomorrow we are heading for the Pacific coast for a whole new set of species.