We met at 6am for another walk around the gardens and woodland at Talari Lodge, we had a clear sky, virtually no wind and a very warm temperature which stayed with us all day.

In the open area near the swimming pool we watched Grey-headed Chachalaca flit from tree to tree where several other species appeared, in fact there was a lot of activity. We found a Tropical Gnatcatcher, we admired several other species that were feeding on fruit. A Streak Saltator was next, it showed well as did a variety of tanagers. A Streaked Flycatcher was nice but our best find was a Barred Antshrike. 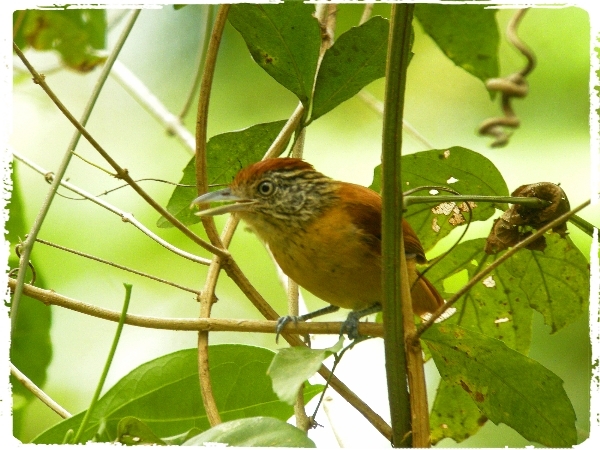 Breakfast was served at 7am but was interrupted several times when sightings were made of birds on the feeders or in nearby trees, we watched a Streaked Saltator, a Yellow-crowned Euphonia appeared in the bushes as well as Olivaceous Piculet, Paltry Tyrannulet, Lesser Greenlet, two varieties of Honeycreepers, and lots of Tanagers.

We were on the road by 8:15am heading for the reserve at Los Cusingos, a small forested reserve founded by Alexander Skutch, the famous American author and ornithologist who put Costa Rica on the ‘birding’ map. Along the way we stopped to watch a tree full of Fiery-billed Aracaris, well there were three of them at least. 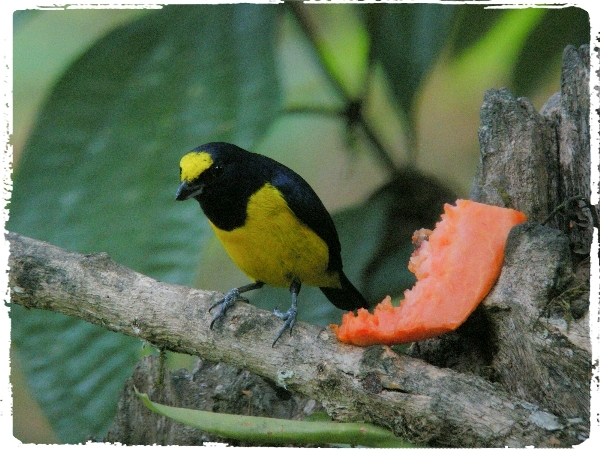 At Los Cusingos we explored the gardens around Alexander Skutch’s home, which is now kept as a museum in his honour, he died in 2004 just before his 100th birthday. The forest around the garden is supposed to be a good place to find White-crested Coquette, Fiery-billed Aracari and Turquoise Cotinga, we have seen all three of them in the past but none of them showed up today. In the garden we found the nest hole of an Olivaceous Piculet, we saw the birds taking food to feed their chicks and a Spot-crowned Euphonia visited one of the feeding stations. 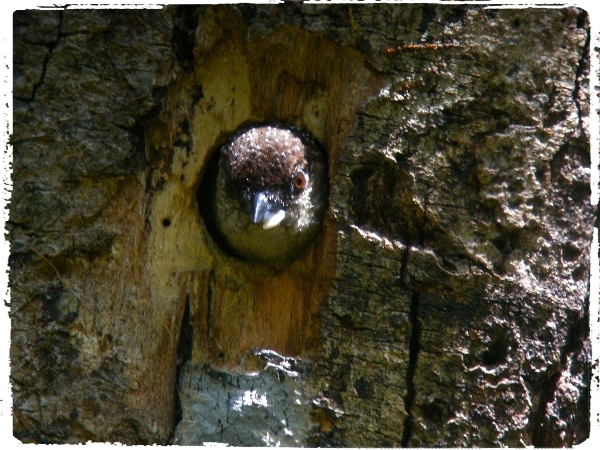 We took one trail into the forest for a walk that lasted a couple of hours or so, birds were few and far between, it was only 9am but the temperature was up in the 30’s and the humidity was high too. After a while we made a series of finds, all which were new for us, Blue-crowned Manakin was nice and showy, a Rufous Phia sat nicely for us then we found a Grey Kite which didn’t stay around for long. Just before we left Johan took us to see where Orange-collared Manakins were known to ‘lek’, they weren’t lekking just now but we did one briefly. 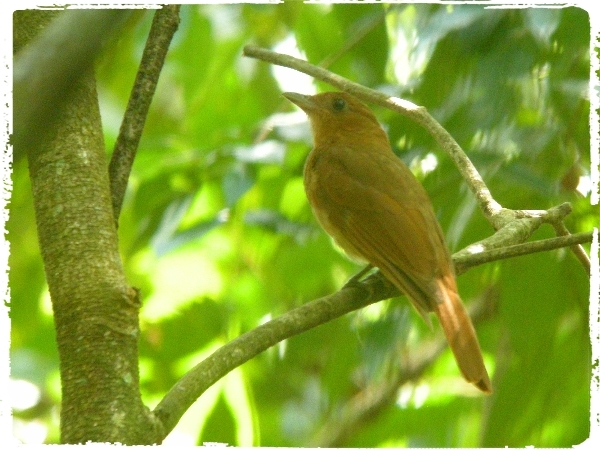 From Los Cusingos we hit the road and spent an uninterrupted hour driving to the Pacific ‘Southern’ region near Quepos. Along the way a nice lunch break was made at a little roadside restaurant where the food was excellent, there was a viewing platform and feeders at the back of the restaurant. We added Black-headed Tityra to the list and we saw several other species.

The landscape had now changed from forested hills and mountains to very flat meadows and rice fields. There was also kilometer after kilometer of Oil-Palm plantations, a very mono-cultured environment with scant biodiversity, the thick palm canopy blocked any light from reaching the ground, leaving a very lifeless ground level. It's not all bad news, these plantations are strickly controlled and the existing ones used land that was formerly Banana Plantations, so forests were not cut down specifically for them. 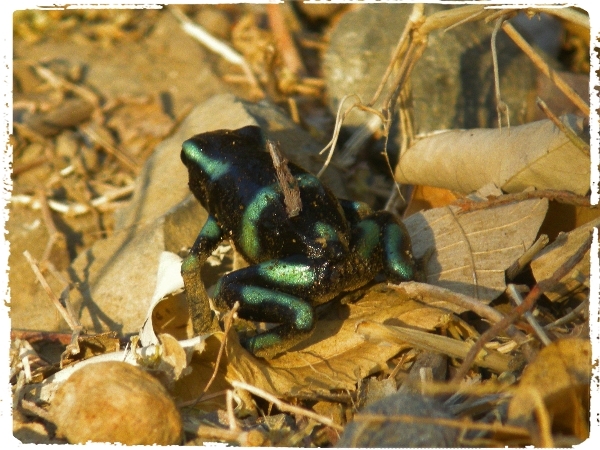 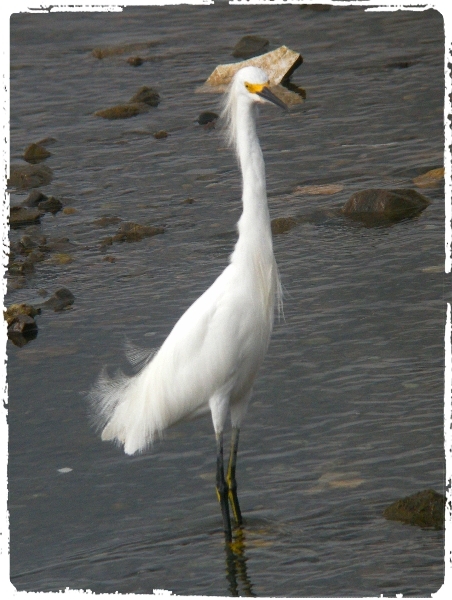 A quick stop at some roadside pools north of Quepos produced a few more species, Collared Seedeater was new for us but we also saw Thick-billed Seedeater, Variable Seedeater, three species of Kingfisher, Purple Swamphen, Anhinga and Great White Egret.

The best birding of the day by far was the last hour before it got dark, we were near Jaco when we turned off the main road onto a dirt track that led us through some huge open fields of rice and grass. We had the most incredible ‘owling’ session’ over the next hour that I have ever had it was fantastic. 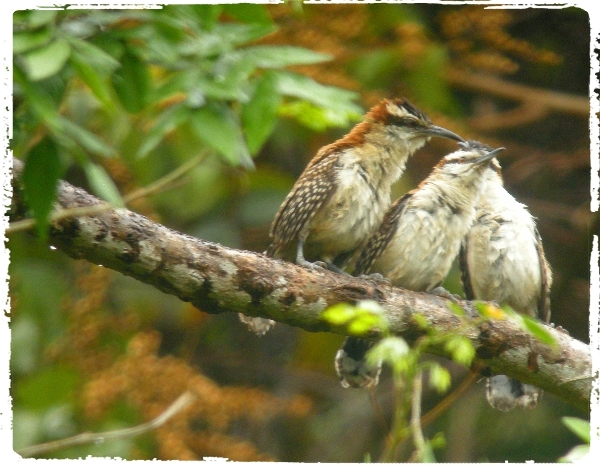 Rufous-naped Wren - a family party of six were found

We found Double-striped Thick-Knee and Eastern Meadow Lark on the grassland. A little further on Johan took us to an area where he knew of a roost of Scarlet Macaws. We saw two birds fly to a tall tree to join a host others, over the next 20 minutes 37 Scarlet Macaws joined the roost adding fantastic colour to the skyline, they were joined by several Yellow-headed Caracaras. What a sight it looked like a decorated Christmas Tree!

It was getting dark when a host of Lesser Nighthawks began to appear, they danced across the evening skyline like derranged bats in search of flying insects. Lots of new sounds came from the surrounding wooded hillsides, Common Pauroque, Mottled Owl, an Antpiita and we saw some Spider Monkeys high in the canopy. Then Johan drew our attention to the call of the Black and White Owl coming from not too far away, we decided to look for it. Within minutes we had the Owl perched in a tree, we scoped it by torch-light, fantastic. 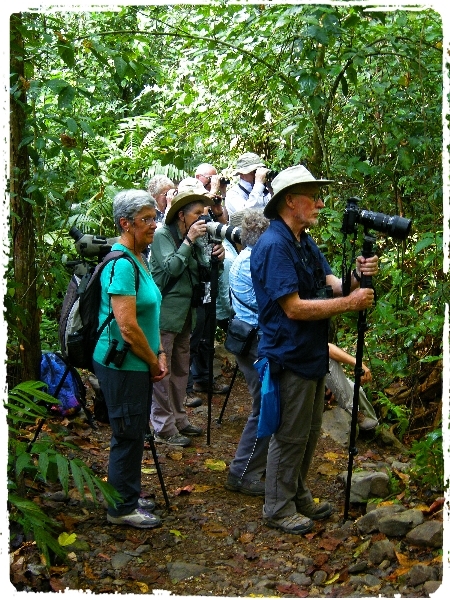 the group this morning

On the way out of the area we found three Barns Owls, another great find. Lastly we spent a lot time looking for Striped Owls which tend to perch on telegraph wires along the main road. At first we never found one but a few kilometers further on near Tarcoles Johan called out and stopped the bus. We got off to scope a Striped Owl sitting on the telegraph wires by the roadside. The owl moved nearer then suddenly another much bigger owl flew down and chased the Striped Owl off, it was a Spectacled Owl! Amazing, this huge owl couldn’t grip the wires to perch, it struggled for a while trying to find balance but couldn’t so it flew off.

After our owl extravaganza we drove the last few kilometres to our lodge, we were late for dinner so we went straight in to the restaurant area. During the last leg of the journey we added Virginia Opossum  to our mammal list. Dinner was lovely and despite everyone feeling tired there was a buzz of excitement after our ‘owl’ experience, we all retired to bed at 9pm!