Today we ate an early breakfast and had to forego our morning walk because we had booked an early river cruise along the Tarcoles River.

Our river cruise was one of the highlights of the tour, we had a marvelous relaxing time, nearly 2 1/2 hours of fantastic bird-watching, we saw just over 50 species of birds, which is amazing. The trip took us down-river for a ‘crawl’ into the mangrove swamps. 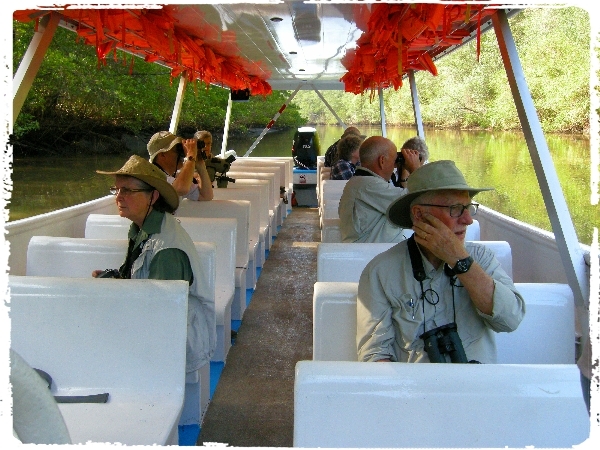 A host of herons and egrets, ibis, storks, waders, cormorants, frigatebirds, raptors and passerines made this trip so memorable. The weather was perfect too, lovely sunshine, no wind just a lovely cooling breeze.

For the first hour or so we drifted into mangrove forest where narrow channels allowed us to get very close to a number of bird species, the American Pygmy Kingfisher sat motionless for us whilst Prothonatory Warbler and Mangrove Warbler (the red-headed version of Yellow Warbler) also showed well. Several Red-winged Blackbirds dashed about, a number of Ospreys sat perched as did Common Black-Hawks and a Plumbeous Kite circled overhead. More elusive was the Mangrove Hummingbird, we had fleeting views of it and the Mangrove Vireo only called but never showed at all. Yellow-throated Vireo and American Redstart were also seen. 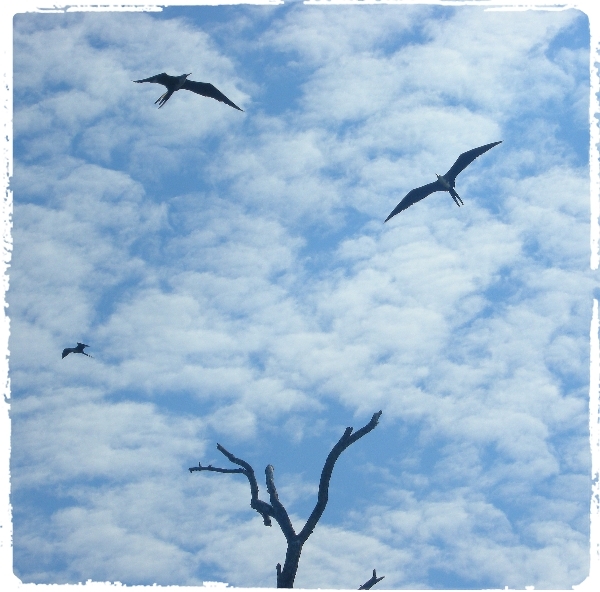 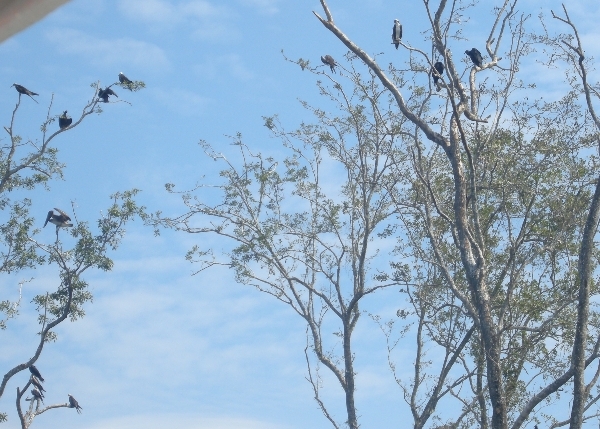 We found all the kingfishers that Costa Rica has to offer in the mangroves, American Pygmy,  Amazon, Green and Ringed Kingfisher and later we found a Belted Kingfisher out in the open water. The best of the herons was Yellow-crowned Night Heron and Boat-billed Heron they were roosting in the mangrove trees where we got great views as we drifted very close to them.

Our return journey was as equally rewarding as the outgoing trip had been, we drifted closer the river mouth and the ocean where large numbers of birds were roosting on the sand banks or drifting over the water. Gulls, terns, frigatebirds, and pelicans filled the sky together with at least 10 Ospreys. We added Black Skimmer and Sandwich Tern to the list together with Whimbrel, Lesser Yellowlegs, Ruddy Turnstone and Grey Plover. 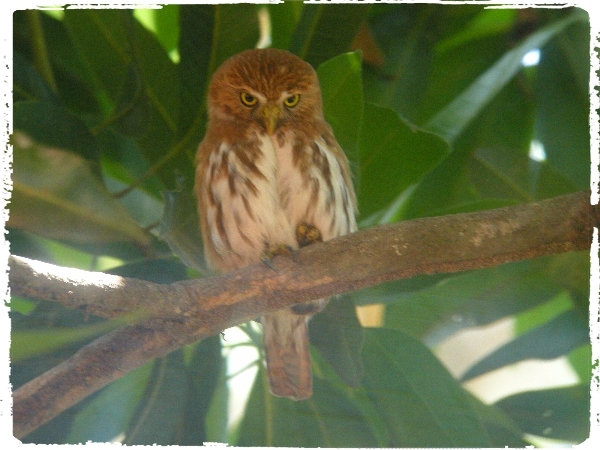 We all agreed that the boat trip has been a fantastic experience and it topped the Tour ‘highlights’ list, but the rest of the day proved to be equally as good with some fantastic sightings.

From the river we drove to a couple of areas nearby where Johan knew of specific trees where roosting owls were. First we tried the Ferruginous Pygmy Owl, this bird had chosen a huge tree to sleep in it took us ages to locate one but when we did we had super views of it. The next owl proved a little more difficult, it wasn’t where it should have been, our search was fruitless except for sightings of another Mangrove Hummingbird, a White-winged Becard and some Orange-chinned Parrots. A second site for the larger Black and White turned up trumps, two of these beautiful owls were present, fantastic. 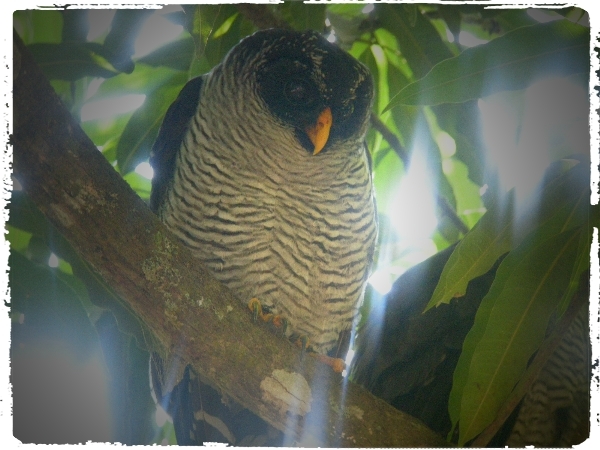 We took lunch in Tarcoles and enjoyed a nice breeze to keep us cool and from there we drove into the foothills looking for one or two woodland species missing from our list. We added a couple of them but also missed a few. A Swainson’s Thrush was a good sighting as was Ochre-bellied Flycatcher we also watched the beautiful Black-billed Toucan and several warblers.

We then set off in earnest to our final destination of the tour, we had only two nights left and they were to be spent in the dry forest in the North Pacific area. We made a quick stop at Caldera along the coast where a huge brackish pool held a large roosting flock of birds. As it was a Sunday hundreds of tourists were on the beach and around the pool so we didn’t stay long, we added Elegant Tern to our list and then left. Just around the corner we stopped at a small mangrove swamp where we finally got great views of Mangrove Vireo, a superb find, we also saw another Mangrove Hummingbird and a lovely male Mangrove Warbler. 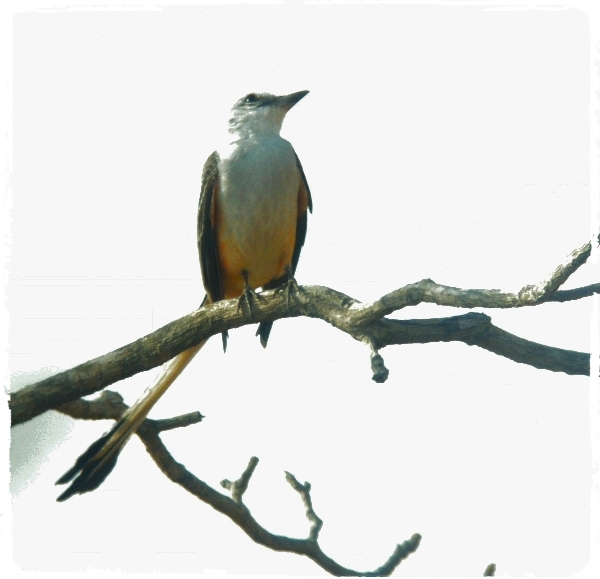 Before we completed the final leg of the journey we made a detour to a shrimp farm near a village called Chomes, we had a fantastic time there. Along the approach track we stopped to watch Scissor-tailed Flycatcher, Blue Grosbeak, some Howler Monkeys and several other birds.

It was low tide when we arrived so many of the mangrove pools were dry and the shrimp pools were not packed with birds as they were feeding out on the mud-flats, but a few small flocks of waders were present, Black-necked Stilts, Willets, Solitary, Least, Western and Spotted Sandpipers were present in small numbers.

We walked to the beach where we had commanding views over vast stretches of exposed mud as the tide was at its lowest ebb. Huge numbers of waders were feeding, we noted Marbled Godwit, Short-billed Dowitcher, both Semi-palmated Plover and Sandpiper. We also listed Caspian and Black Terns, Roseate Spoonbills and many species already list, it was a lovely spectacle.

Our driver, Damian has taken a good interest in what we do and as he strolled along the beach whilst waiting for us, he suddenly started whistling to divert our attention to a couple of birds at the back of the beach. He had only gone and found a pair of Painted Buntings, the male was in full summer plumage, absolutely stunning, bird of the day quickly sprang to made. These exquisite birds allowed close approach and many pictures were taken despite the poor light. 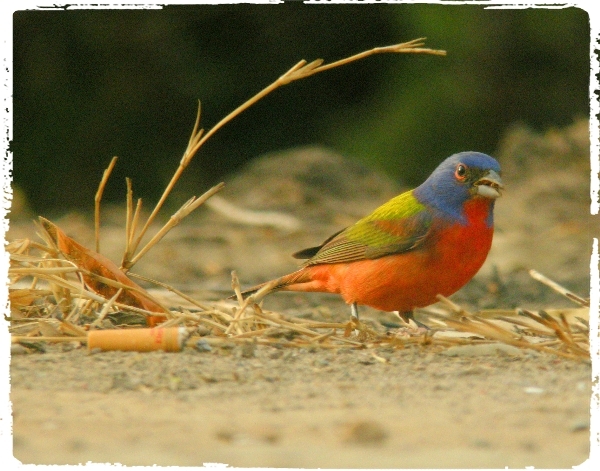 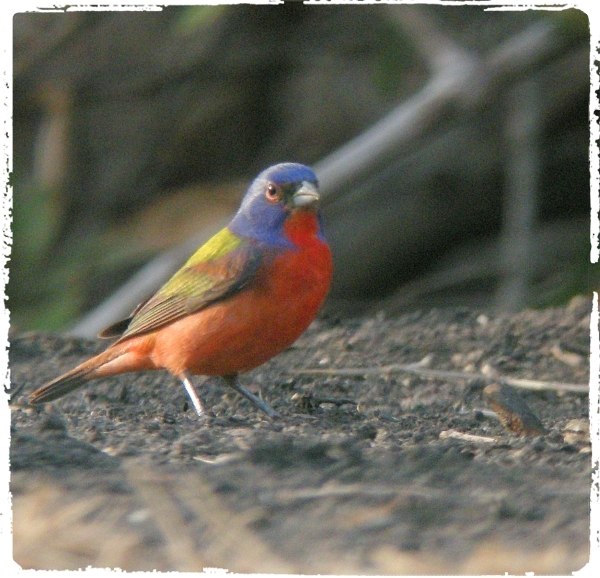 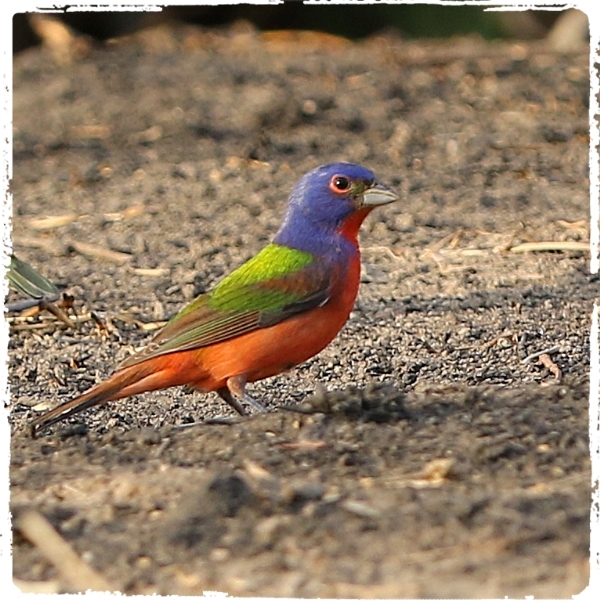 this much sharper picture was taken by Tim Norriss

So we set off at last for the last leg of the journey, we made a quick scheduled atip to look for Clapper Rail but only found White-fronted Parrots, a new species for us. Next we stopped to watch a male Blue Grosbeak and in doing so Johan called out a Lesser Ground Cuckoo, he heard it but we failed to locate it. Next we stopped to look at a small party of Crested Bobwhites seen along the side of the track, marvellous, this species can be difficult to find. 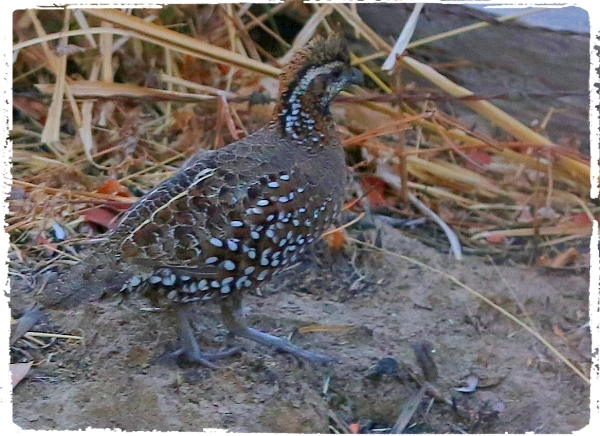 As it got dark we saw a couple of owls, the first a perched Ferruginous Pygmy then a Pacific Screech Owl flew across the track in front of the bus, that was our last bird of a very long day but superb day. We arrived at 7:15pm at Ensenada Lodge, dinner was ready so after a quick wash we went straight to the restaurant to eat.

It is amazing that with a trip list that totalled 400 we could possibly add another 39 species but that is exactly what we did today. One more full day left let’s see what tomorrow brings.