A day littered with great sightings and some real close encounters of a couple of the most spectacular birds...........

Weather:  a beautiful clear morning to start then cloudy later.

We met at 6am for a walk along the trails of Selva Verde, it was a clear dry morning and after watching the bird feeding station for a while we set off into the forest along the ‘river’ track. A couple of Ring Kingfishers flew by as we approached the water’s edge and then we found Green Kingfisher and Spotted Sandpiper. 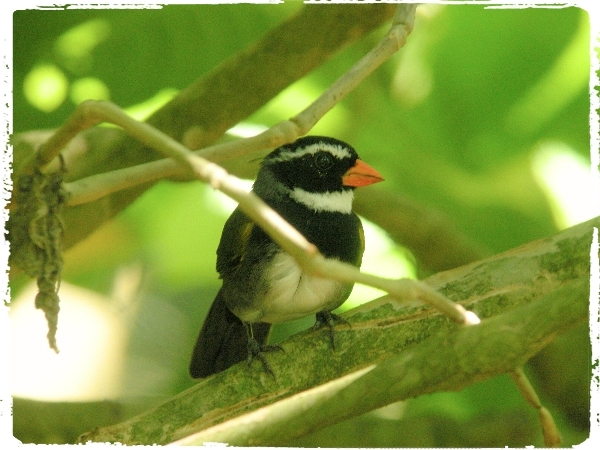 Other good birds seen during our walk included Grey-capped Flycatcher, Orange-billed Sparrow, Chestnut-backed Antbird and not much else.

After a nice breakfast we gathered again and boarded the bus for the hour long drive to La Virgen, an area of much higher elevation with steep sided forested-gorges and open pasture. Spectacular waterfalls seemed to be a feature in most of the valleys.

We climbed to the top of La Virgen Valley where a restaurant had a superb ‘Galerie de Colibries’ a ‘gallery of Hummingbirds’ which was a wooden terrace that looked over the valley giving panoramic views which included a spectacular waterfall. The platform had many ‘hummer’ feeders and a large feeding station. It was buzzing with all types of birds, we added seven new hummingbirds to our list including the Endemic COPPERY-HEADED HUMMINGBIRD. It was fantastic to see so many birds at such close quarters, the bird table attracted many tanagers, we added the Common Bush-Tanager now called Common Chlorospingus to our list but seeing Silver-throated, Palm. Blue and Grey and Passerini’s so close was magical. 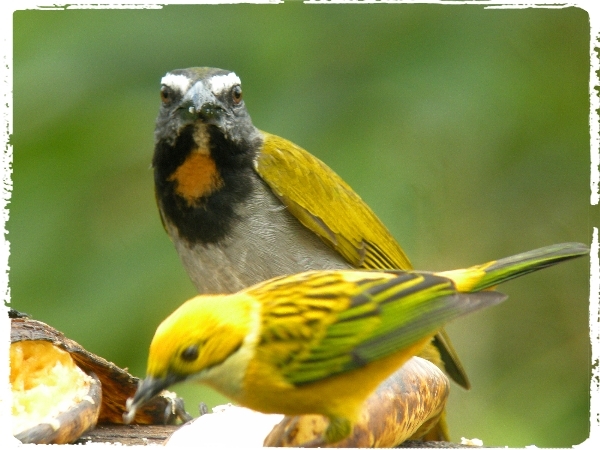 Before long some real goodies started to appear beginning with Prong-billed Barbet a regional endemic, then an Emerald Toucanet showed up followed by the fantastic looking Red-headed Barbet, absolutely stunning. 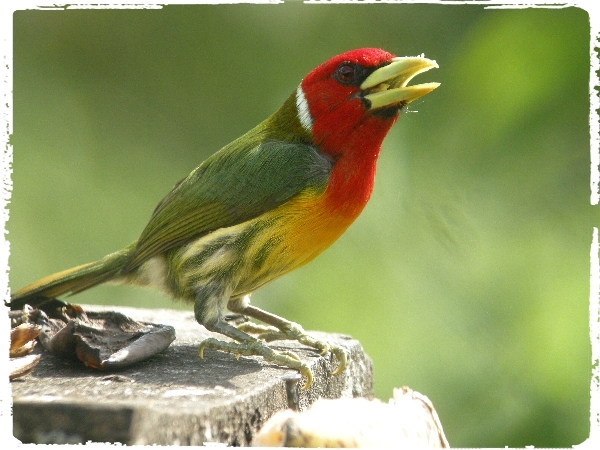 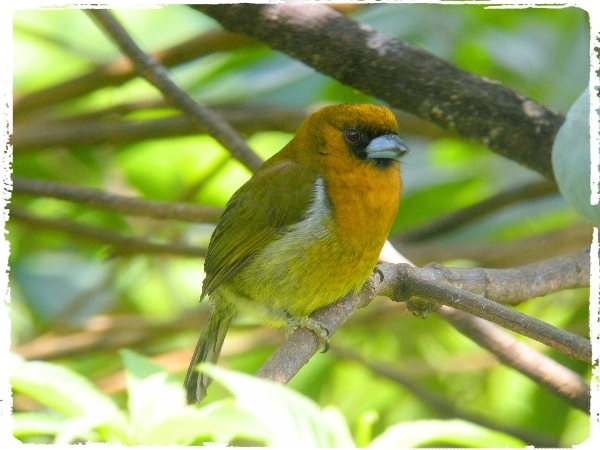 At around 10am we decided to go for a walk down in the valley below so we boarded the bus and headed down the valley, we stopped after a kilometer or so at a nice clear area where a good panoramic view of the valley could be had. The weather was just right for raptors, we had already noted many Turkey and Black Vultures in the sky so we looked for birds of prey. 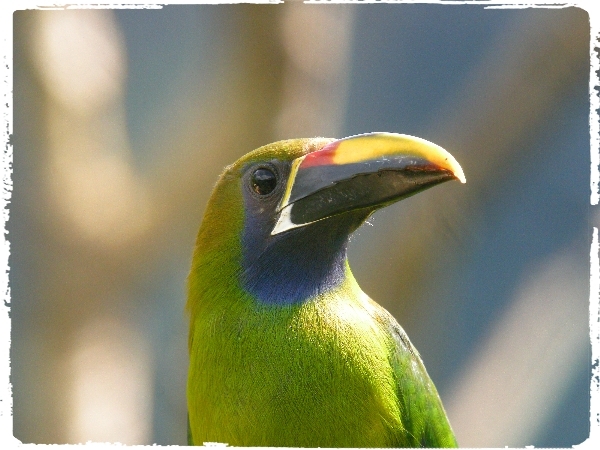 A pair of Barred Hawks appeared low down below us but soon rose to eye-level and above, then our main target species appeared in the distance, it too was circling on the thermals and gave good views in the bins. The next bird produced some excitement from the group, it was a Swallow-tail Kite, what a beauty. Finally a Broad-winged Hawk flew over from behind us it was pursued by a Bat Falcon, they both split up and circled for a while. Well that was an exciting 30 minutes let’s hope the next couple of hours will be just as good.

We drove to a dirt track which led down to the river at the base of the valley where we jumped off the bus and began our downhill trek. Within minutes we a real gem, a Black-crested Coquette, we watched this tiny hummer return to a resting place a couple times. 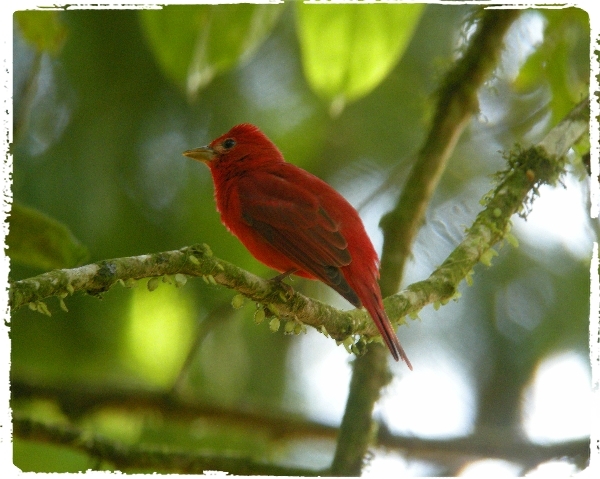 Generally the walk was quiet we watched more butterflies than birds but it ended in a flurry of sightings, a Tufted Flycatcher was found high up a steep bank but it was hard to view, a Dusky-faced Tanager was found skulking in thick scrub and as we watched that a real goodie appeared in the shape of a Wrenthrush, unfortunately the sighting was only brief.

At the bottom of the track we came to a river and from the bridge we listed Black Phoebe and Torrent Tyrannulet along with several butterflies. From there we climbed back onto the bus and headed back to the restaurant for lunch. 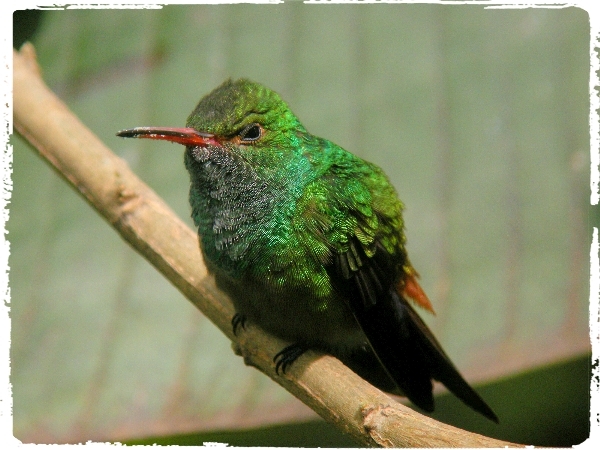 The restaurant served us lunch on the terrace whilst hummingbirds flitted around us, what a great setting and a unique experience. We had further sightings of the seven hummers a Melodious Blackbird was the only new species for us but we added Rufous-collared Sparrow and Buff-throated Saltator to the day list.

Following lunch we drove back to the Selva Verde Lodge and took a short break of an hour, some of group stayed out birding whilst others took a rest. A nice list of species was amassed during this time including: Plain-brown and Northern-barred Woodcreepers, Stripe-breasted Wren, Lesser Greenlet, Summer Tanager and a new hummer, Bronze-tailed Plumeleteer.

For the afternoon we first went for a walk outside the perimeter of Selva Verde, the route was along the main road and then along a track to the river. We had great views of a male SNOWY COTINGA, what a beauty, then we saw a Long-tailed Tyrant, a Piratic Flycatcher and several other species. The highlights at the river included sightings of Fasciated Tiger-Heron, Amazon Kingfisher, Gartered Trogon, Black-faced Grosbeak, Lineated Woodpecker, Blue-Black Grassquit, Cinnamon Becard and lots of other previously recorded species. 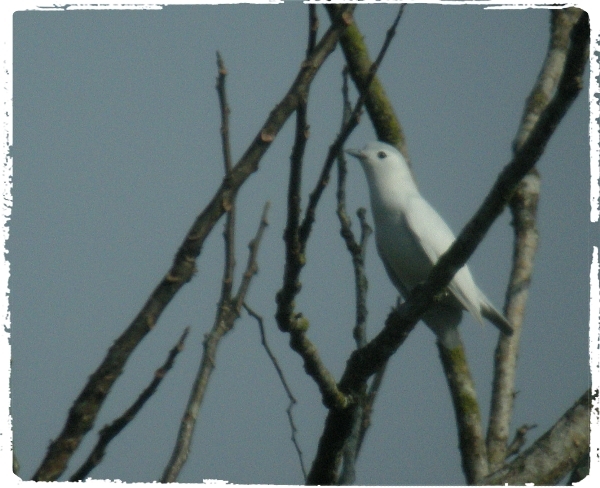 record shot of the Snowy Cotinga

Lastly we drove the entrance drive of La Selva Biological Station where we spent the final hours of daylight searching the forest edge for new species. We tried to coax out a Uniform Crake, it called several times but did not appear, however a Great Tinamou did. The same applied to an Olive-crowned Yellowthroat it also failed to show.

A little further along the road we found Rufous-tailed Jacamar, Tropical Gnatcatcher, Long-billed Hermit, Dusky-capped Flycatcher and we had 3 Great Green Macaws fly over us. We watched large mixed flocks of the two Oropendolas having great views of Chestnut-headed in the scope. Our final new sighting of the day was of a Wood Thrush seen from the bus as we drove back to Selva Verde for the last time.