It rained on and off all day but that didn't stop us from recording a nice list of species including a couple of excellent sightings........

Our early morning walk was abandoned due to the heavy rain but most of the group got up early and sat watching the feeding station outside the restaurant. We added a couple of species to our list but generally it was very quiet. A Striped-necked Hermit and a Streak-headed Woodcreeper were the pick of the bunch. By 8am we were all packed, breakfast was over and we set off for our next destination, Rancho Naturalista some 3 hours away. 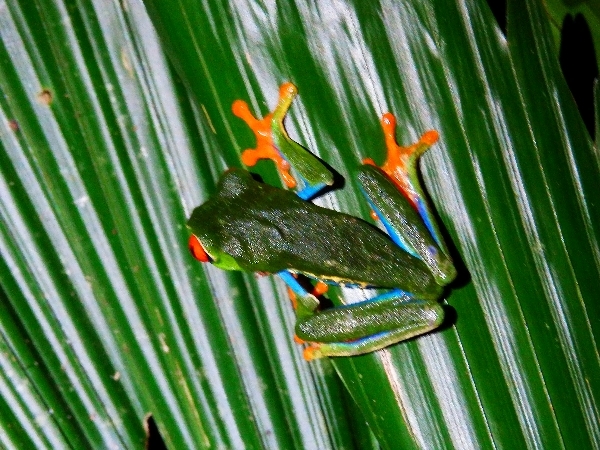 The rain subsided within an hour of setting off just as we were arriving in the village of La Union where we planned to stop for an hour or so. A local guy has developed his garden into a birding haven complete with feeders, fruit plants and a sheltered hide. We piled into the hide and settled down to a bird-fest. 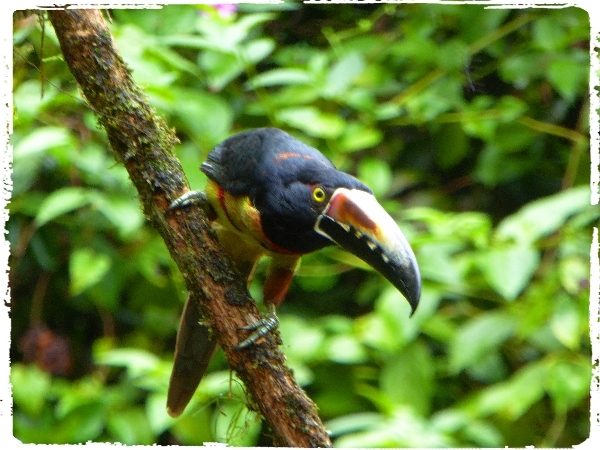 It was a wonderful experience, the birds came so close to us,  the feeders were so well placed that we could almost reach out and touch the birds. It was a bit like a hummer-show with a good number always in sight, apart from the common White-necked Jacobin and the Rufous-tailed Hummingbird we saw: Long-billed Hermit, Green Hermit, Striped-necked Hermit, Bronze-tailed Plumeleteer, Crowned Woodnymph, Voilet-headed Hummingbird, Blue-chested Hummingbird, but by far the most exciting sighting was that of a WHITE-TIPPED SICKLEBILL, this rare little beauty was a fantastic find and a lifer for all of the group including me. 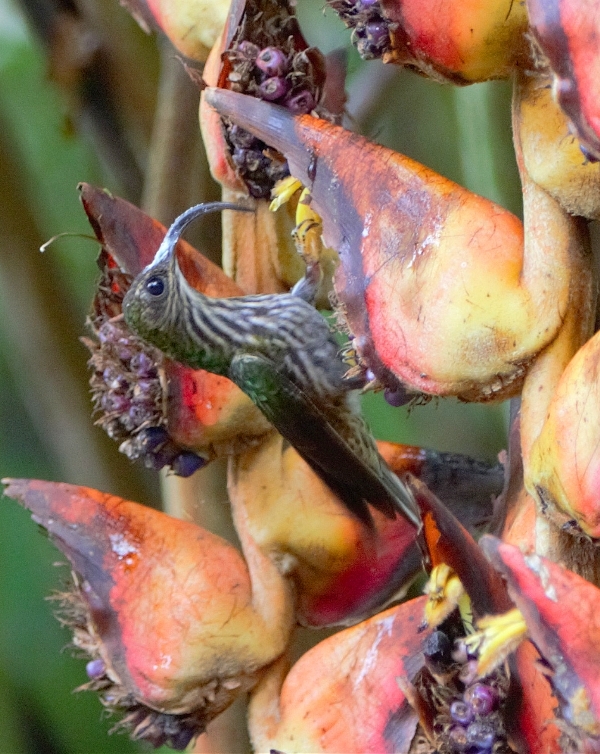 Many other species showed up during our stay, the rain stopped, the light improved and so did our enjoyment. Both Chestnut-headed and Montezuma’s Oropendolas came to feed as did Green Honeycreeper, Collared Aracari, Palm Tanager, Buff-throated Saltator and a surprise was a Grey-headed Chachalaca. A Grey-necked Wood-Rail was a crowd pleaser, I could hear the camera-shutters clacking like a room full of typists.

As we left the hide the sun started to break through the clouds and Tim, our butterfly expert, found several species near the bus, that cheered him up and delayed our departure for a few minutes.

It was a 2 hour drive to Rancho Naturalista but before we arrived there we made a second birding stop at Casa Turire Hotel, this spa hotel has extensive grounds with horse paddocks, a woodland, manicured garden areas and a huge lake. 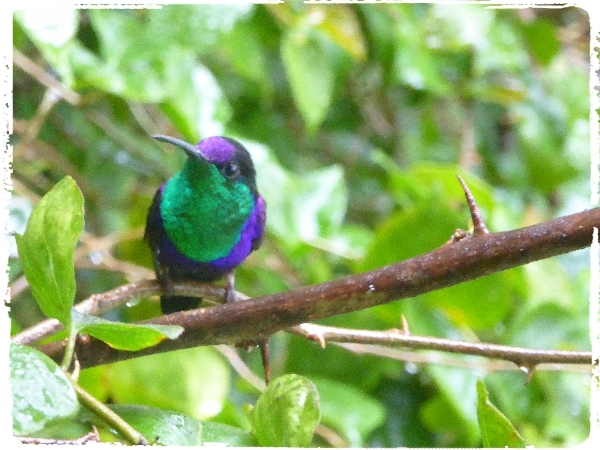 The lake was our main reason for stopping, it is good for a number of species with Snail Kite being the main target bird. We logged Southern Lapwing on the way in and the lake produced a hat full of species; Lesser Scaup, Blue-winged Teal, Pied-billed and Least Grebes, Great Egret, Little Blue Heron, Great Blue Heron, Purple Gallinule, Common Gallinule, Northern Jacana, Muscovy Duck, Neotropic Cormorant, Anhinga and Snail Kite.

A walk in the woodlands produced very little so we set off on the last leg of our journey, a Giant Cowbird was added to our trip list on the way out of the complex. 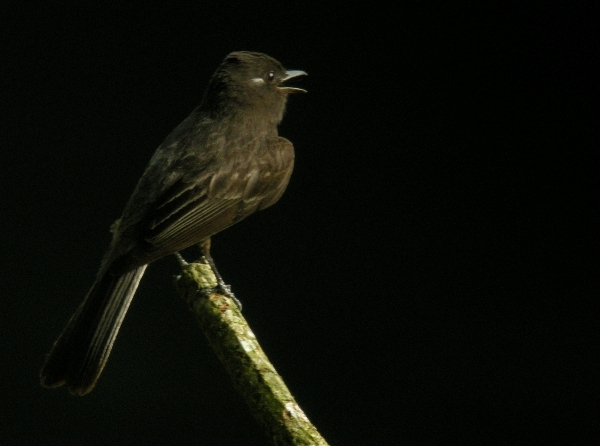 It was still raining when we got to Rancho at 2pm, we immediately sat down for lunch on the superb terrace overlooking the gardens where bird-feeders and birds were everywhere. We quickly logged Black-striped Sparrow and a SNOWCAP appeared half-way through the soup course, how inconvenient!

New hummers for our list included the Snowcap, Green-breasted Mango and Green Violetear but it was just great to see so many White-necked Jacobins, Rufous-tailed Hummingbirds and Crowned Woodnymphs.  Grey-headed Chachalaca, Brown Jay, Tennessee Warbler, Buff-throated Saltator and White-lined Tanager added to our enjoyment. A male Golden-winged Warbler was exquisite as it bathed in one of the numerous pools, such a gem. 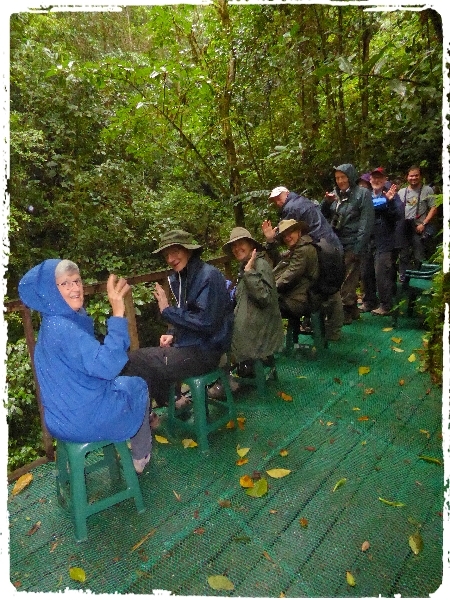 After settling into our rooms we met up again at 3:45pm for a walk to the famous Rancho ‘hummingbird pools’ a series of small, natural basins formed by a cascading stream in the forest. These pools are visited by a number of species to wash and drink, but it is the ‘hummers’ that make this such a special place.

After a steep downward climb we all sat on chairs on a platform that overlooked the pools and as the light began to fade hummingbirds started to appear. Despite persistent rain they would hover over a pool and then dive down into the water to bathe, it was magical, several different species came to wash including the Snowcap and Crowned Woodnymph. Other species seen included a lovely Kentucky Warbler and an Ovenbird was seen by one of the group who stayed longer than the rest of us. 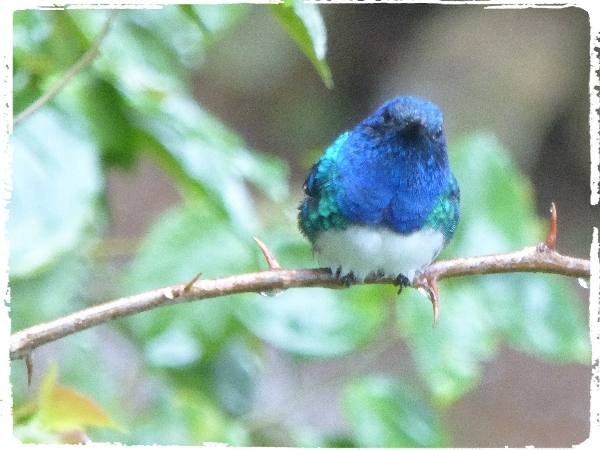 Back at the Ranch a couple more birds were added to the list, another hummer, the Brown Violetear and our second Wood Thrush, finally the light faded into darkness and we packed up to end an eventful day, let’s hope the rain eases off tomorrow.