A full day at Rancho Naturalista was a mixed bay of fortune but one really exciting find brightened up our day...............

WEATHER:  clear and sunny with some cloud, warm all day

We met at 5:30am on the veranda of the main building at Rancho Naturalista, coffee and Tea was waiting for us, it was just getting light and the hummers were stirring. But before we spent time looking at the feeders we walked up the hill a little way to an area where a huge mercury lamp is used to attract moths, unfortunately for the moths it also attracts a lot of moth-eating birds. We arrived just in time to have a good look at a wide variety of moth species ranging in size from tiny dots to huge hawk moths. 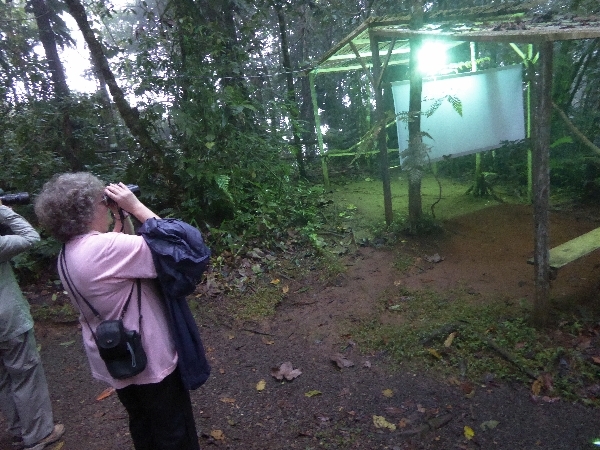 the moth trap - lamp and white-sheet at Rancho Naturalista 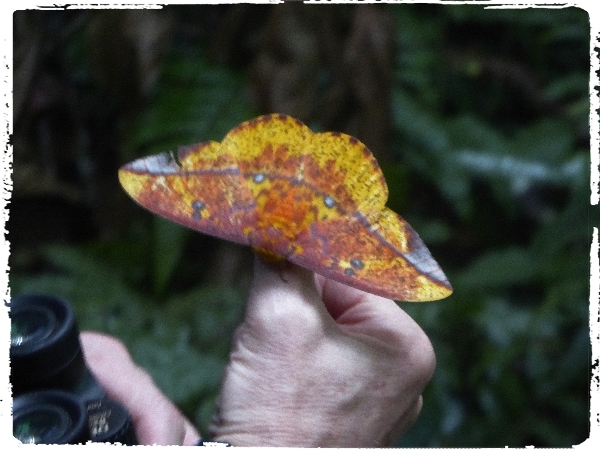 one of the many moths on the 'sheet'

As it got light a number of birds appeared and began to devour our moth collection, White-breasted Wood-Wren, Orange-billed Sparrow and Bright-rumped Atilla came first, then a couple of Flycatchers turned up, Dusky-capped and Yellow-bellied. It took a while for our most wanted to show up, first the Buff-throated Foliage-Gleaner then the Tawny-breasted Flycatcher flitted about. We also saw Red-throated Ant-Tanager, Plain Antvireo and two nice warblers, the Golden-crowned and Kentucky Warblers, they joined Chestnut-sided and Tennessee Warblers on our morning list. A Blue-crowned Motot popped in and a Rufous Motot was heard whilst both Streak-headed and Plain-brown Woodcreepers came for moths. 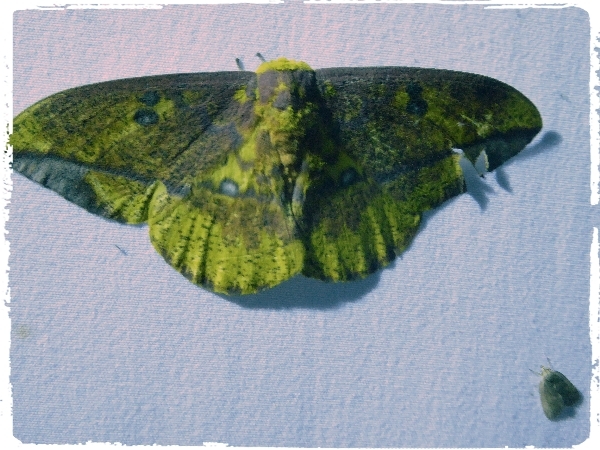 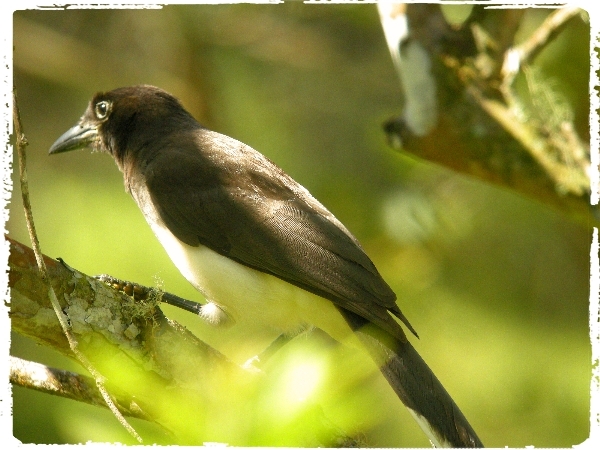 At 8am we were on our way to the nearby forest trails. It was slow going, typical forest birding, not many species to look at, not far along the trial there is a second feeding station that attracted Violet Sabrewing, Bronze-tailed Plumeleteer and two Crested Guans flew into nearby trees. We then walked a looped forest trail stopping to watch Dusky Antbird, Long-billed Gnatwren,  Carmoil’s (Olive) Tanager, White-shouldered Tanager, Tropical Gnatwren, Buff-throated Foliage Gleaner and several more. 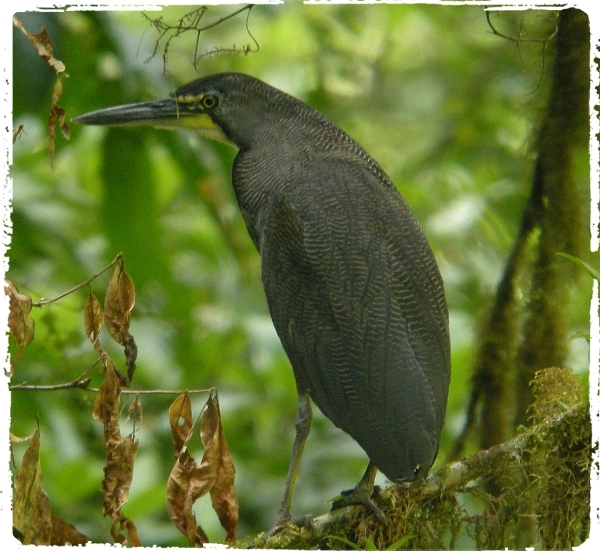 The next track took us to some open areas where an almond plantation grew, we saw very few birds there, Brown Jay, Cinnamon Becard, Yellow-bellied Elaenia and a Common Black Hawk overhead. We then heard a Thicket Antpitta calling from the forest, half the group opted to search for it whilst half stay in the almond orchard. The group got close to the Pitta but never saw it and the other half of the group never added any new species. 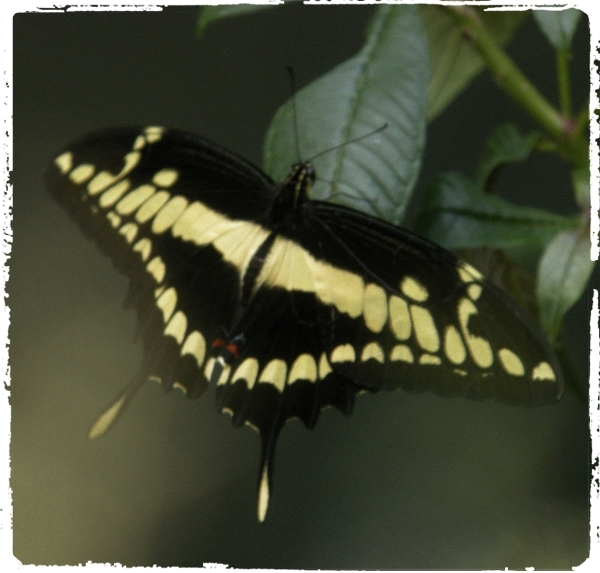 We walked back to the ranch for lunch and along the way we found Thick-billed Seed-Finch, Lineated Woodpecker, a lot of Tennessee Warblers, Blackburnian Warbler, Rose-breasted Grosbeak, Baltimore Oriole and several tanagers. A Snowcap appeared during lunchtime as did Rufous-capped Warbler, Bananaquit and many other hummers.

It was after lunch that the real excitement started, we drove down the mountainside to an area called La Mina near the river Tuis. As soon as we got off the bus we located a SUNBITTERN from its constant calling, we then realised that the bird was in full display mode. With its wings full extended and arched forward display its beautiful wing feathers, wow this was fantastic. We then found two other individuals and all three flew up river, we relocated them as the male began its display again, what unbelievable luck.

Three pics of Sunbittern - none of them much good - despite nice sunny weather the bird always managed to stay out of the sunlight. 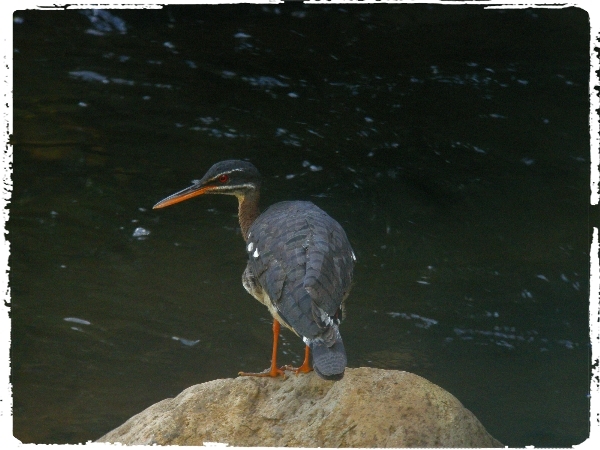 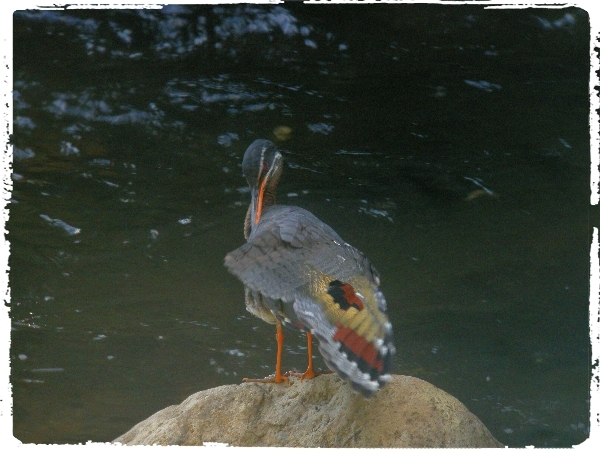 Displaying - he would not turn round and show both wings 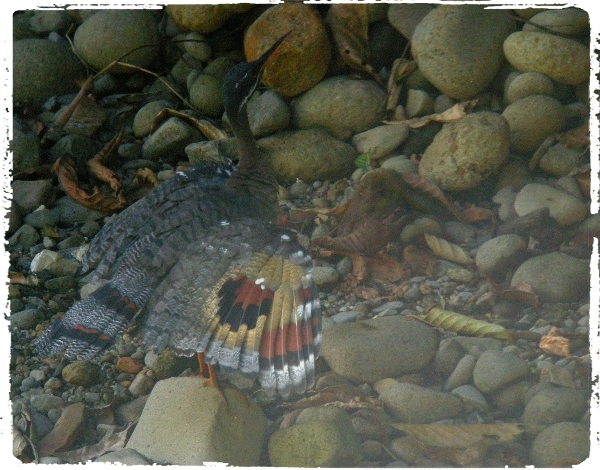 After a while the display ceased and the male caught a huge frog, which we identified as a Gladiator Frog, it was killed and promptly eaten! After that a short walk produced nothing new but we were entertained by butterflies as Tim’s enthusiasm was now rubbing off onto most of the group.

We then drove to the river Tuis along another long dirt road, birding was hard work with very little to see, none of the trees were fruiting so we never found a mixed feeding flock. We did see a flock of some 15-20 Red-fronted Parrolets but they were just fly-overs, the same with a Broad-winged Hawk.  A Paltry Tyrannulet, Yellow-bellied Elaenia, Bay-headed Tanager and Slate-throated Redstart were some of the few birds listed. 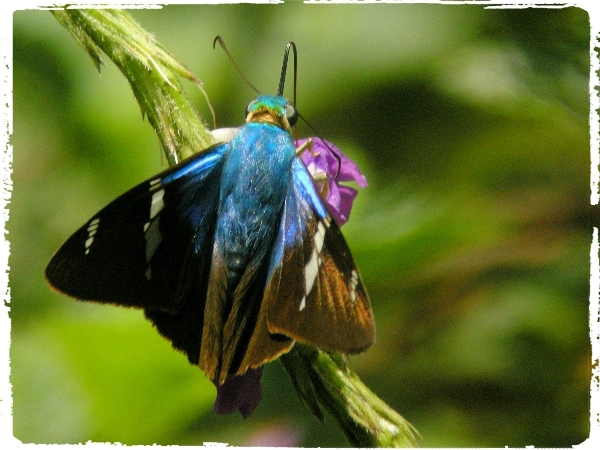 one of the many skippers on show at the river

It was now getting late in the afternoon and some of the group wanted to return to the Hummingbird Pools, whilst others wanted an early shower in readiness for our 6pm dinner. The Pool group enjoyed a dry session with better light than yesterday, they saw all the usual suspects plus a Tawny-throated Leaftosser.

Another delicious dinner was enjoyed by all, the bird-log was a little shorter than usual but we are approaching the 250 species mark after 6 days which is on track.