We were fortunate with the weather it was a beautiful sunny day for our trip to Tapanti National Park we had some great sightings in the mid-elevation primary forest.............

Weather: lovely dry & sunny until around 3pm then rain

Tapanti National Park protects some 300k hectares of mid-elevation primary forest, it has many well marked trails and a central track that cuts through the forest for several kilometers.

Just as we did last year we had a fabulous clear morning, not a cloud in sight.  We met at 5:30am for the short drive to the Tapanti National Park passing through Orosi and along a 5km dirt road. A crake dashes across the track in front of the bus and Johan Identified it as a White-throated Crake, nice start! 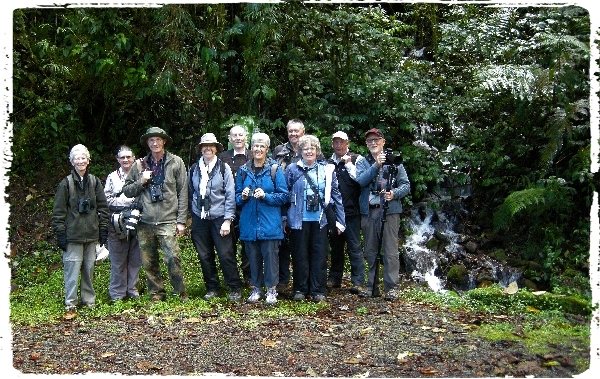 We disembarked about 1km from the entrance to the park and began walking along a wide dirt road with encroaching forest on both sides of us. A party of Black-breasted Wood-Quails was making a lot of noise but failed to show and we heard Buffy-crowned Wood-Partridges but they were a long way off.

Soon we began to find lots of birds in the trees alongside the track, Ruddy-faced Spinetail was one of the first then Black-faced Solitaire quickly followed. A few Tanagers fed above us and mixed with them were a few warblers such as Blackburnian, Golden-winged, Black & White, Chestnut-sided and a Streaked Xenops. A Slaty Antwren also ended up on our list after some searching.

Spangle-cheeked Tanagers are stunning, we saw several with Bay-headed and Silver-throated, also the Red-headed Barbet put on a show and not to be out-done the Slate-throated Redstart was in good form. We spent some time locating a Slaty-backed Nightingale-Thrush and at the entrance to the park we found a pair of Spotted Barbtails. This was an excellent start to our day in Tapanti. 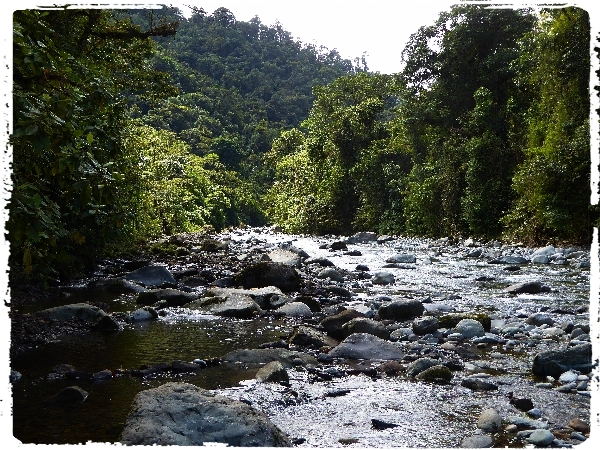 a view of the river running through Tapanti

Next came a superb hummingbird, the Green-fronted Lancebill what a great sighting, the bill on this species must be the longest on any bird in the world in proportion to its body length, wow! Two other hummers, the Purple-crowned Fairy and a Violet Sabrewing were found nearby.  Good bird sightings kept on coming, the next goodie was a Streak-breasted Treehunter we had fantastic views of that one. 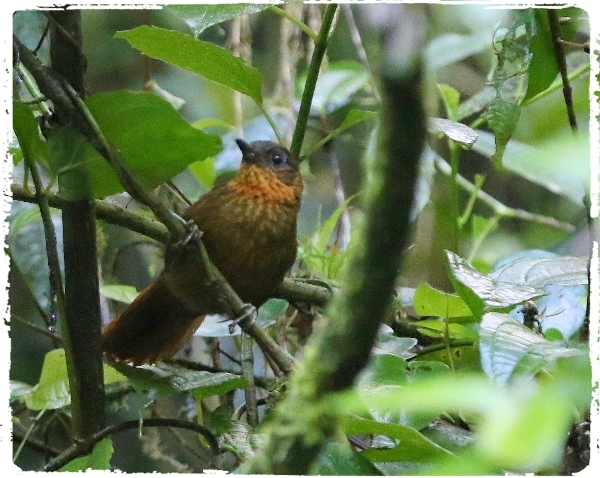 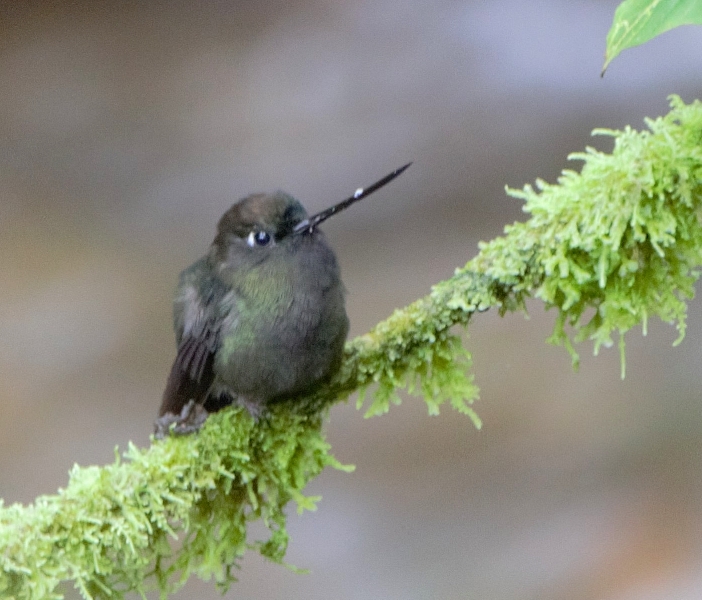 Walking deeper into the forest we found Collared Trogon, lots of Common Chlorospingus, Tawny-capped Euphonia, Scale-crested Pygmy-Tyrant, Paltry Tyrannulet,  and one of the group saw a White-throated Thrush. We took a side trail through the forest but only found several more of the same species, it was now late morning so we decided to stop and eat lunch which was shipped-in by our driver Damian – he drove into town and returned with a lovely hot meal for us all. We ate lunch at picnic tables next the Mirador Catarata de Salto, which is a viewing point of an impressive waterfall far off across the valley. 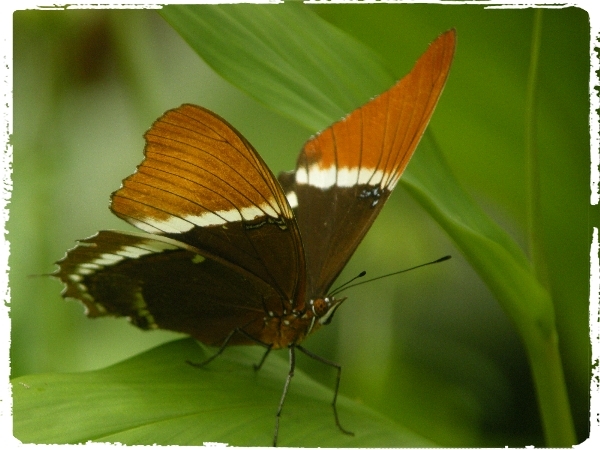 Afer lunch we walked up to the mirador for a quick look at the valley with its impressive waterfall, whilst there we logged two Swallowtail Kites.

Our afternoon walk kicked off rather well, we found a Lineated Foliage-Gleaner, an unusual sighting indeed, then we spent 15 minutes waiting for a Silvery-throated Tapaculo to come out of the dense scrub, only one or two people actually saw it. A Tufted Flycatcher was next to go on the list a delightful and beautiful little gem. Tawny-capped Euphonias were almost common with several sightings and American warblers were a feature of our sightings but the next best species was a Triple-striped Warbler one of the few resident warblers of Costa Rica. Two more hummers went on the list as we discovered both White-bellied and White-throated Mountain-Gems, both were seen perched and feeding too. 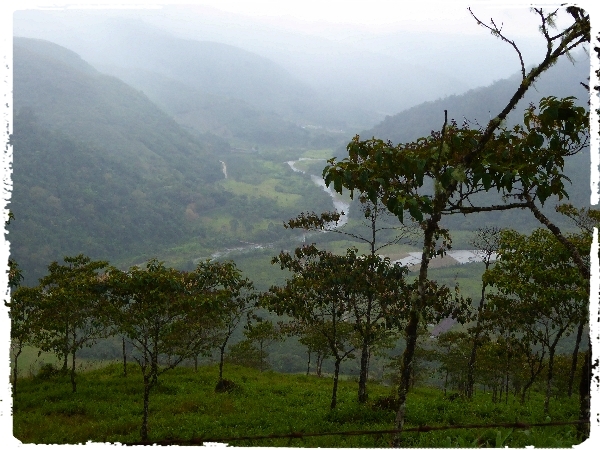 view from the upper track late in afternoon rain

For late afternoon we decided to drive just outside the park and climb to a much higher woodland along a steep track, it took 30 minutes to get there, the cloud was thickening and the daily weather pattern set in, it looked like rain. A light drizzle greeted us on the way up but it never stopped us enjoying sightings of Mountain Eleania and a couple of superb looking male, Black-throated Green Warblers, what a beauty. At the top we found several Golden-bellied Flycatchers and just as we jumped off the bus we immediately found a pair of Elegant Euphonias, the male of this species is the one of the most colourful and brilliant little bird you are likely to see. 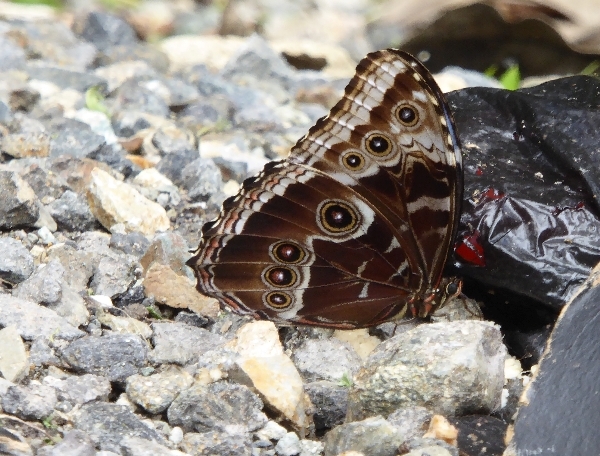 a Blue Morpho butterfly feeding on a garbage bay

We set off walking and as we went downhill so did the weather, the rain began to fall heavier, we spent our last birding searching for Golden-browed Chlorophonia, we could hear them calling but they failed to show.

So the rain curtailed our day yet again, we arrived at the hotel around 5pm some of group went birding for a short while and turned up a couple of new species for the trip, a Black-headed Saltator was the first followed by a Roadside Hawk sighting. 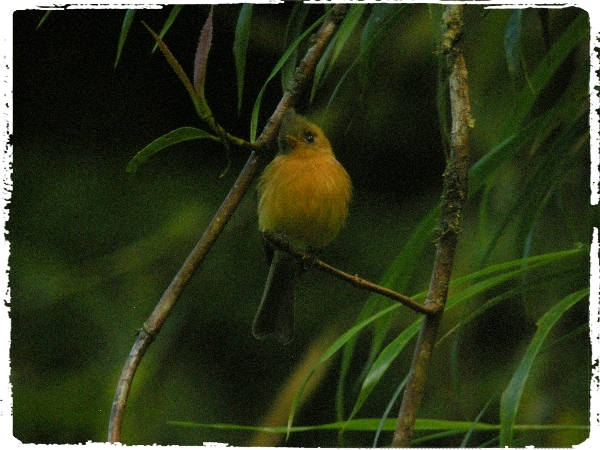 We are now just over half-way through our tour with our species list fast approach 300 in total, tomorrow we are heading to the high elevation where a host of new sightings await us.................