We met at 6am for a pre-breakfast stroll around the beautiful gardens of the Hotel, it was a bright morning but windy with dark clouds looming ominously over the mountains. Many of the species that we saw yesterday were seen again this morning, but we also saw several additional species. Lineated Woodpecker showed very well as did a Squirrel Cuckoo, Philadelphia Vireo and Brown Jay was seen several times.

By the time we had eaten breakfast, packed up the bus and set off it began to rain, lightly at first but as we drove into the mountains it became more persistent. At Braulio Caraillo we had a brief respite from the drizzling rain until we well along the forested trail. 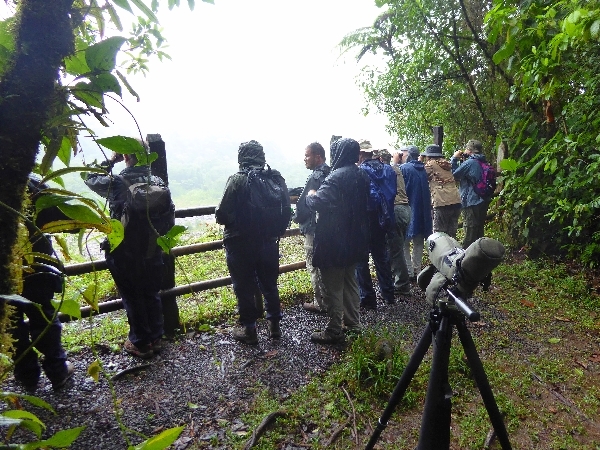 we got a right soaking at Braulio

Birds were few and far between and it very dull in the forest, we managed to see only about 5 species during the first hour!  White-breasted Wood-Wren, Bananaquit, Spotted and Wedge-billed Woodcreepers and Tawny-crested Tanager.

The rain increased, we all scrambled into our waterproof jackets, capes and trousers and the birds disappeared. We completed the 2km circuit without seeing another bird.

The second trail we walked was across the busy Pan-American Highway, it was noisy, wet and not very pleasant it was nice to get back into the shelter of the forest. The track ran downhill for a while and we started seeing birds again. A feeding flock held some tanagers and our second sighting of Spotted Woodcreeper. We also saw Chestnut-sided Warbler, Red-throated Ant-Tanager, White-shouldered Tanager, all very nice to see as was Bay-headed and more Tawny-crested Tanagers.

It wasn’t until we finished the walk that we bumped into a very nice mixed flock feeding along the roadside trees. We quickly found a number of very interesting species including; Russet Antshrike, Yellow Warbler, Yellow-and-Black Tanager, White-throated Shrike-Tanager, Tropical Parula, Emerald Tanager and another Yellow Warbler. 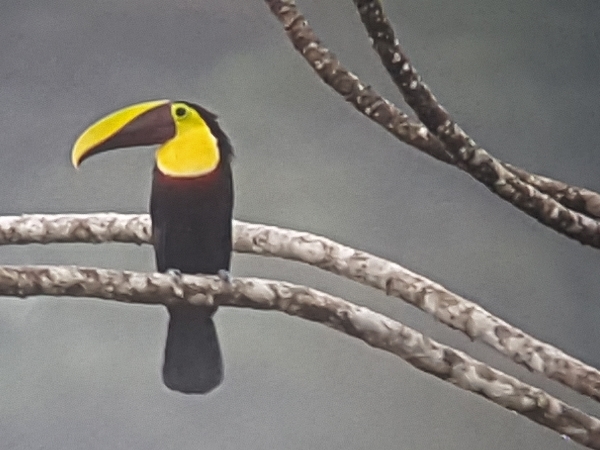 It was nice to get back onboard the bus and to escape from the rain, phew! Finaaly we saw some decent birds but the weather conditions were very poor.  Our next stop was just ten minutes along the road.

A disused roadside dwelling had a large array of flowers and over the past few years it has been the site where one of the most sought-after hummingbirds has been frequenting. The Snowcap is a little jewel and we hoped to see it next. The dwelling is on private land, so we had to pay our way into it, the rain eased off but it still continued to try to ruin my morning. After 20 minutes of watching Rufous-tailed Hummingbirds chasing off any other species that dared feed in the garden a Snowcap arrived on the scene. Well the group went bananas but no sooner has the jewel arrived a Rufous –tailed drove it off.

However, over the next 30 minutes the bird returned several times and even perched nicely for us, both the male and female eventually turned up, wow what a stunner. Other hummers seen were the Stripe-tailed Hermit and the Violet-headed Hummingbird.

Lunch was taken in large roadside restaurant some 20 minutes down the road, it continued to rain throughout our stay there. A 2:30pm we drove off towards Guapiles and turn off on a side road to a place where WINGSPAN TOURS have made regular stops over the last few years. It is a private garden run a local artist and nature lover, called Copé. Has built a hide in his garden and put up many feeders.

Before we even got into Copé’s garden we watched several excellent and colourful species in the surrounding gardens and scrub. The beautiful Passerini’s Tanager went down well with the group, as did Common Tody-Flycatcher, Variable Seedeater, Social Flycatcher and Montezuma Oropendola. 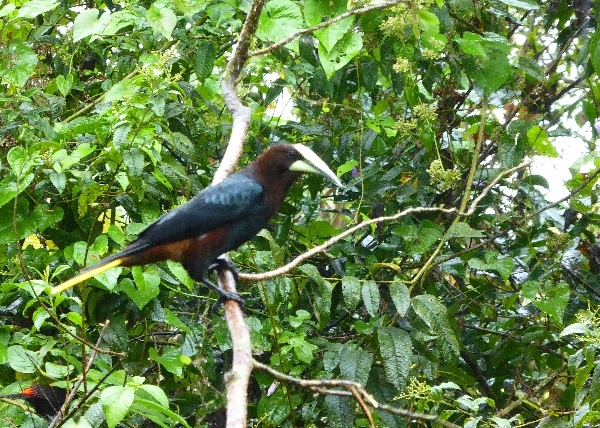 The hide was just sensational, the group were simply mesmerised by the number of species, the diversity of colour and the constant movement in front of their eyes. It was an amazing experience for all of us. At one stage there were 9 Palm Tanagers eating Bananas whilst both Montezuma and Chestnut-headed Oropendolas squabbled over perches, then four Collared Aracaris moved in whilst both Red-legged and Green Honeycreepers dropped onto the bird tables. All this went on in the back ground of some very busy ‘hummer’ feeders. 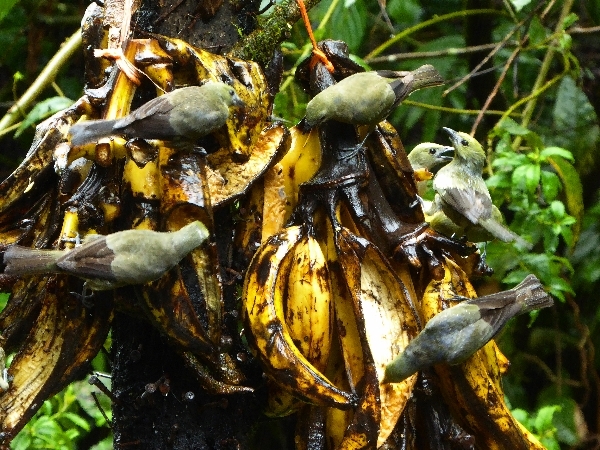 White-necked Jacobins, competed with Long-billed Hermit, Crowned Woodnymph and Bronze-tailed Plumeleteer for the positions on the feeders. All the time that this was going on an injured Yellow-throated Toucan sat gloomily on a perch and watched the proceedings with nonchalant fascination. 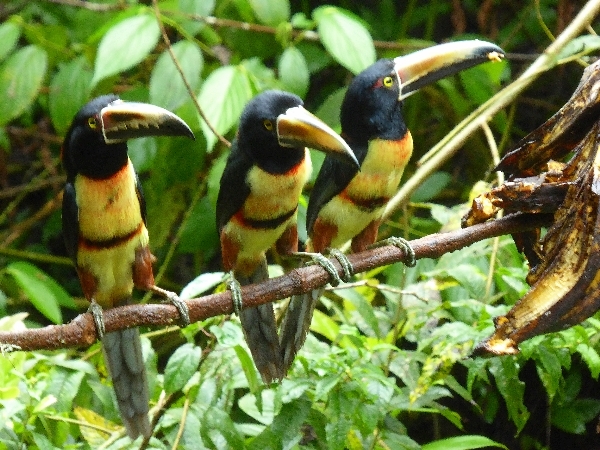 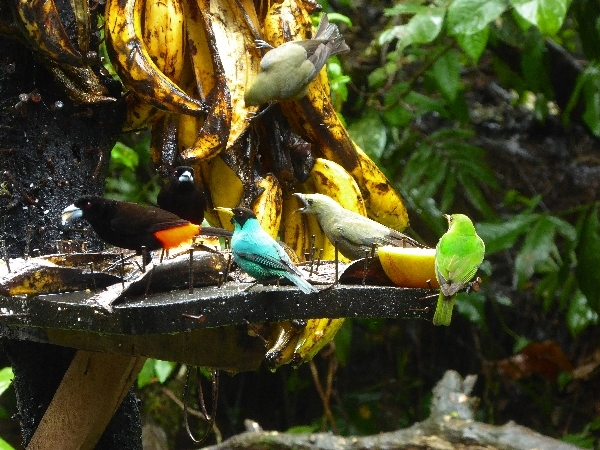 After that excitement it was very hard to prize the group away but we enticed them the chance of seeing a couple of roosting owls. Within ½ an hour we were watching first a pair of Crested Owls and then a single Spectacled Owl, superb birds. Also seen along the tracks were a group of Toucans, both species were present, Yellow-throated and the most beautiful Keeled-billed, simply stunning. 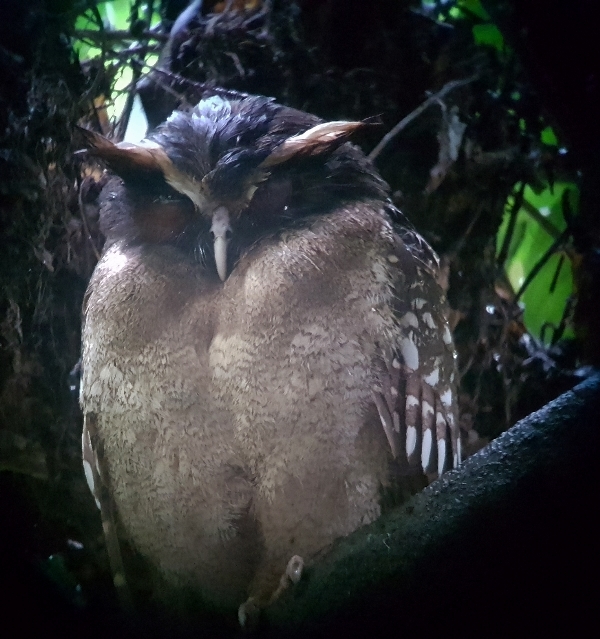 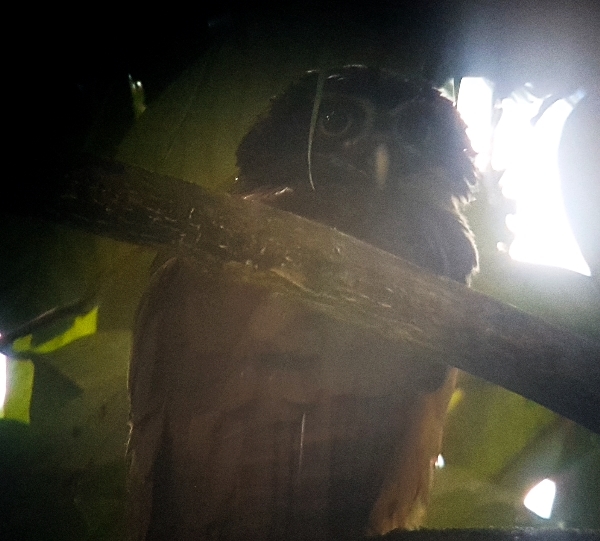 record shot of the Spectacled Owl 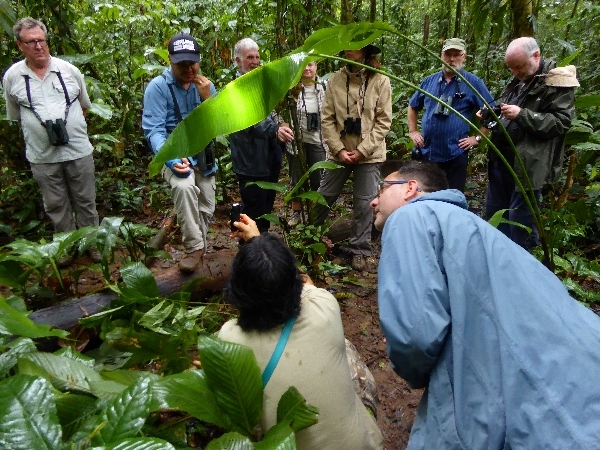 We were exhausted, wet and getting hungry so we boarded the bus for the last time and set off for the Lodge at La Selva. It was dark when we arrived, we quickly dropped off our belongings into our rooms and drove up to the main headquarters where we ate dinner. A Common Pauraque was seen by torch-light along the track just before dinner.

Our bridlog revealed that we had seen over 90 species, amazing considering the awful weather conditions.