It was a beautiful morning with a very colourful sunrise, a Pygmy Owl brought me from my slumber followed by a Turquoise Motmot and a group of Howler Monkeys, thanks guys!

We spent a little time on the verandah of the restaurant watching Scarlet Macaws flying from their roost along with Montzuma Oropendolas and Crested Caracara. Our walk commenced at 5:45 as we left the grounds and walked along the main track outside the lodge. It wasn’t long before we were watching a nice selection of species. 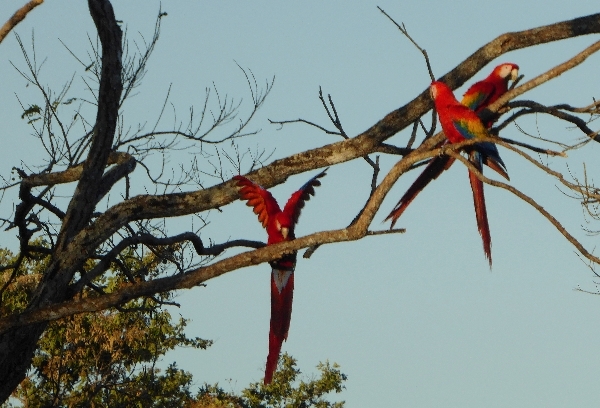 White-fronted Parrots, Yellow-naped Parrots, Yellow-olive Flycatcher, Rose-throated Becard, Black-headed Trogon and plenty more came out to see us. The one and only new bird was the Greenish Elaenia, we also heard our first Striped Cuckoo but it failed to show. 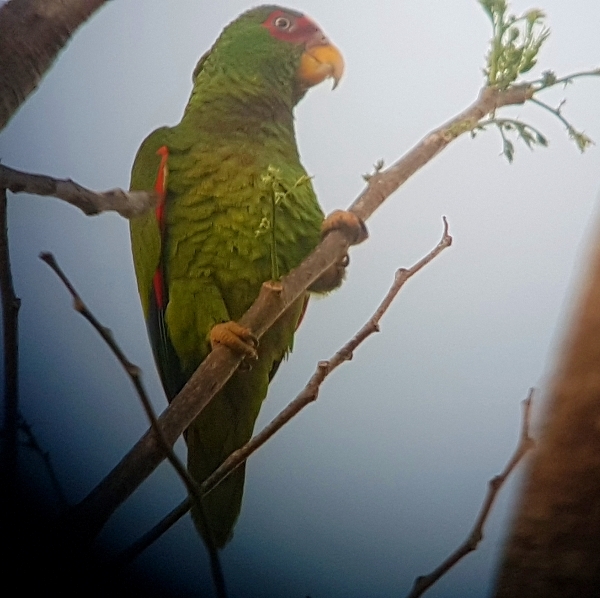 After breakfast we set off for our morning visit to Carara National Park, along the main track from the lodge to the highway we stopped twice, and on each occasion, we added a super bird to our list. The first was a Painted Bunting, in fact there were four of them, three females and one very colourful male, unfortunately the male flew off before we could focus our cameras. 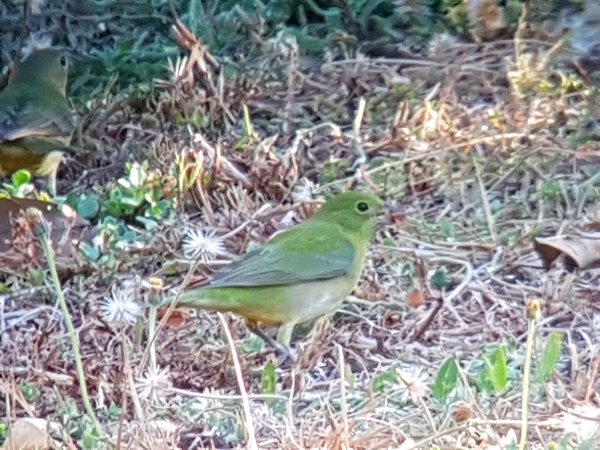 Unfortunately I only got a picture of the female Painted Bunting

The second bird was equally as prestigious, it was a Yellow-billed Cotinga, again we had to be satisfied with the less colourful female, nevertheless it was a great find.

Carara Rain Forest National Park is unique in Costa Rica, it forms the link between the dry north and the wet south where both types of forest can be found, offering a unique habitat and plenty of bird life. The trails are flat and wide, sometimes muddy but often dry at this time of the year. We walked the ‘River’ Tail for three or four hours this morning. Our bird list wasn’t the longest, but the quality was there. Birds which stand out in my memory are: Royal Flycatcher (I have never seen it with its claret and blue crested erected), Orange-collared Manakin, Eye-ringed Flatbill, Black-headed Antbird, White-whiskered Puffbird, Barred Antshrike, Chestnut-backed Antbird and Northern Bentbill. 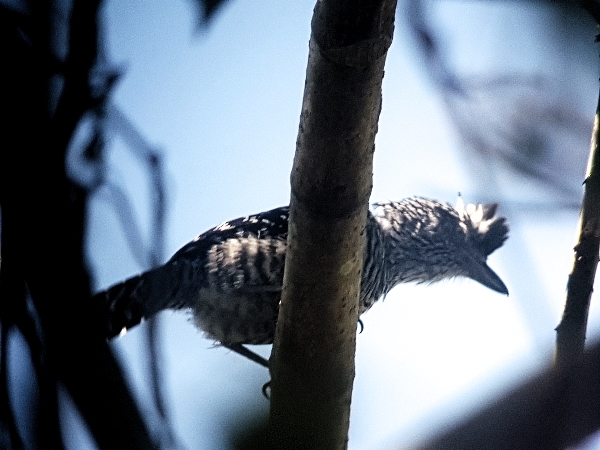 We left the forest at 11:30 and drove back to the bridge over the Tarcoles River where we spent some time looking down at the huge American Crocodiles that gather there. We then took lunch at a roadside restaurant before returning to the hotel for a short break. 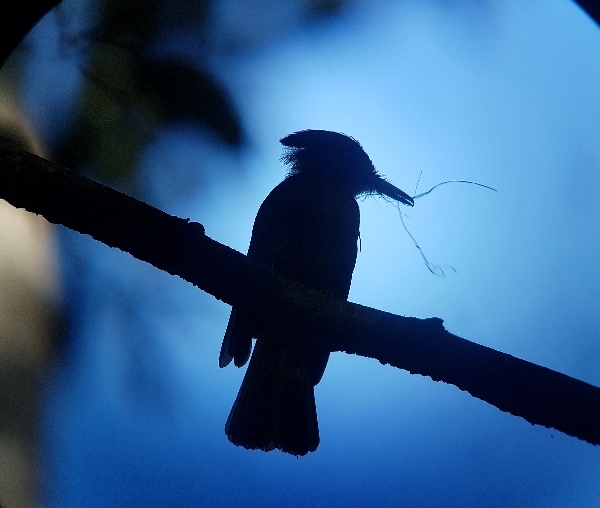 The unmistakable silhouette of the Royal Flkycatcher

The afternoon session was again in the Carara National Park on a different track again we added some great birds to the list. The most impressive was the Streak-chested Antpitta that Johan our guide called in, it was superb. 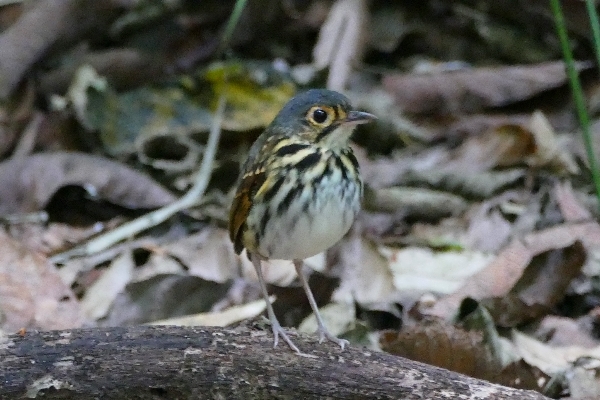 We went on to a small stream where we sat for an hour and watched a series of birds come down to bathe. It was enchanting, we all kept perfectly still and quiet whilst Red-capped and Blue-crowned Manakins visited the stream. A Sulphur-rumped Flycatcher did the same and we had close views of an Agouti which fed along the stream. 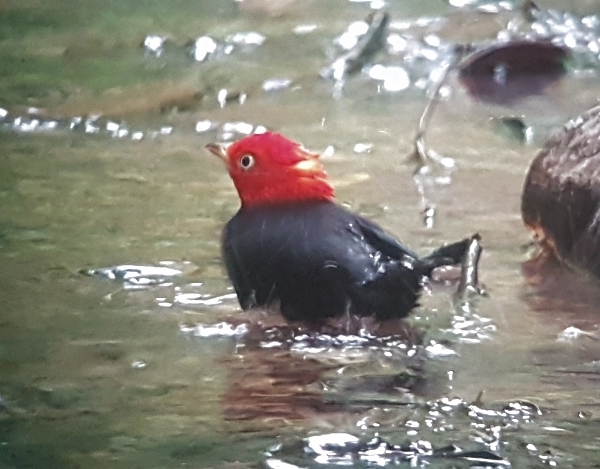 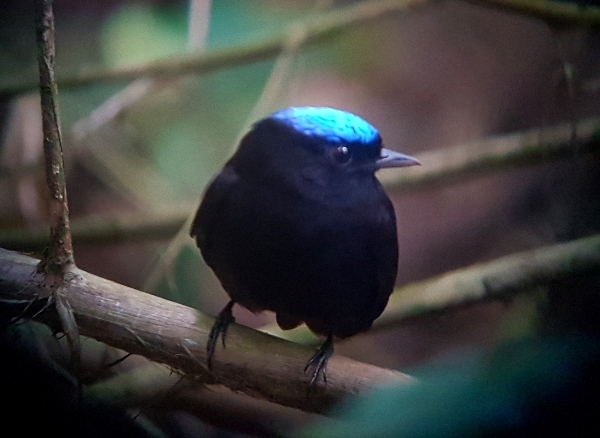 Our day in the forest resulted in 26 new species being added to the list bringing our total to 366. We are travelling further south tomorrow after we have taken our much-anticipated river cruise.