TRANSFER FROM TALARI LODGE TO TROGON LODGE WITH BRIDING IN THE GROUNDS AT TALARI AND SEVERAL STOPS ALONG THE WAY.

Our day began with coffee in the restaurant at 5:45 and then we walked around the grounds at Talari Lodge which are extensive and also have a panoramic view of the local Rio General. It was a bright sunny morning with a perfect warm temperature. Over the next hour we had some great birding, the gardens were alive with birds, the dawn chorus was amazing to hear.

An Olivaceous Piculet was one of our first new birds, one of the smallest woodpeckers in the world. Next we watched a few flycatchers with Social, Grey-capped and Streaked all showing well. A Rufous -chested Wren was a good find before we arrive at the river viewing point. Several species of birds were added to our list but the most appreciated find was that of two River Otters, they performed well. 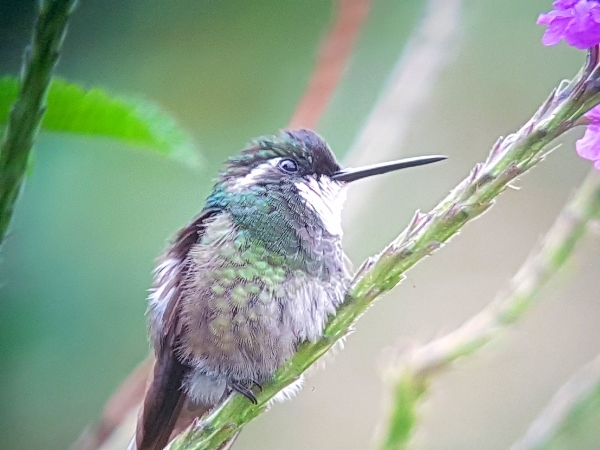 To finish off the walk we set off towards the restaurant area and found two more additions to our list when first an Orange-billed Nightingale-Thrush appeared then a Grey-headed Tanager.

After breakfast we pack our bags and put everything on the bus and made our departure around 8am. We set off into the nearby countryside to look for a number of target species. It took most of the morning but we found nearly all of them during a series of short walks and stationary birding stops. The Fiery-billed Aracari was seen perched by those in the front of the bus but all the others had to settle for flight views. This was not the case for the Turquoise Cotinga, this was our third Cotinga of the trip and it showed well. 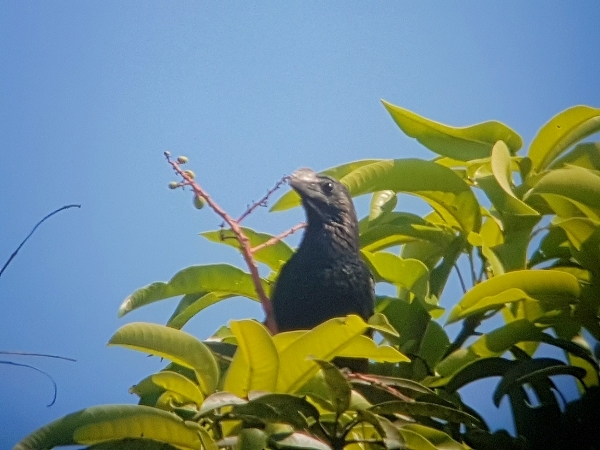 Other target bird seen were Smooth-billed Ani, Fork-tailed Flycatcher and Northern Beardless Pygmy-Tyrannulet. We also added a good deal more with Rufous-browed Peppershrike being the most admired. 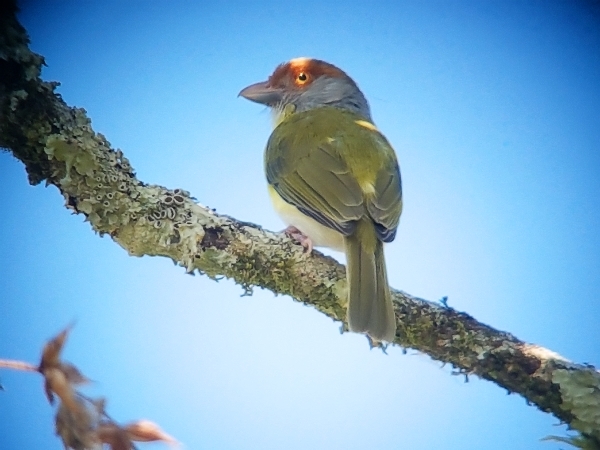 We moved on around 10:30 and headed for the Paramo area in the middle of the country, passing first through San Isidro then climbing up into the cloud forest. We stopped for an early lunch at a restaurant that had feeders and a viewing balcony. We saw our first White-naped Brush-Finch and several tanagers.

Our next stop was at a regular site during this tour, it was a private lodge which has wonderful gardens and many feeders. We notched up 8 hummingbirds several of them were new for us, such as, White-throated Mountain-Gem, White-tailed Emerald, Snowy-bellied Hummingbird and the star hummer, White-crested Coquette. We also added Slaty Flowerpiercer. 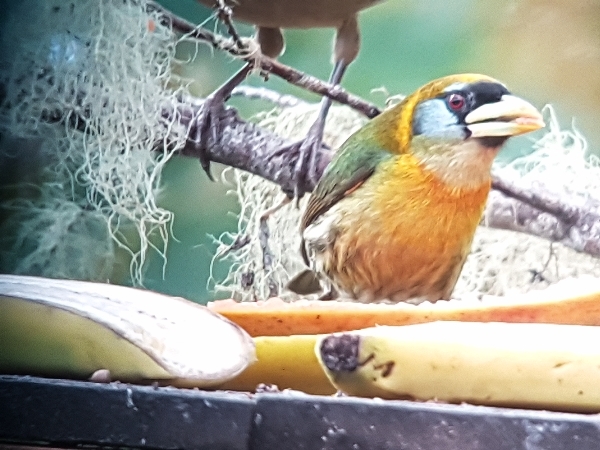 We continued our climb up into the Talamanca Cordillera, we could see the highest peak, Mount Chirripo, which stands at 3,819 meters. Once above the tree-line we entered the ‘Paramo’ a rich area of vegetation, mainly low growing shrubs adapted to severe weather conditions. 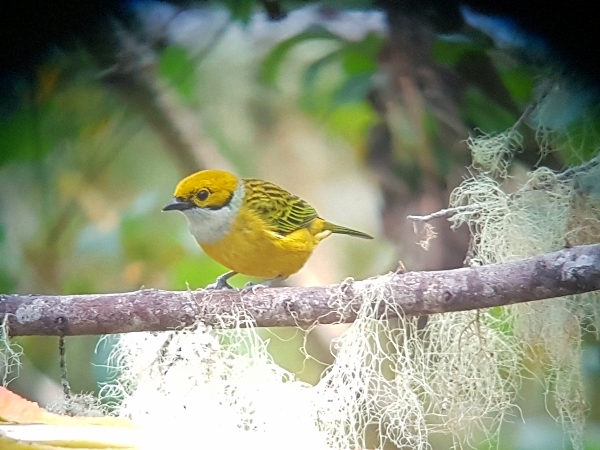 The weather was very kind to us up in the Paramo, a bit of cloud but generally dry and clear with very little wind. It was quite chilly so we all grabbed our fleeces as we got off the bus. We though we had found our main target bird, the Volcano Junco,  almost immediately but it turned  to be a Black-billed Nightingale-Thrush we then found several Slaty Flowerpiercers, a Dusky-headed Chlorospingus, we had brief views of a Volcano Hummingbird and a Black-throated Green Warbler was seen by just two of the group.. 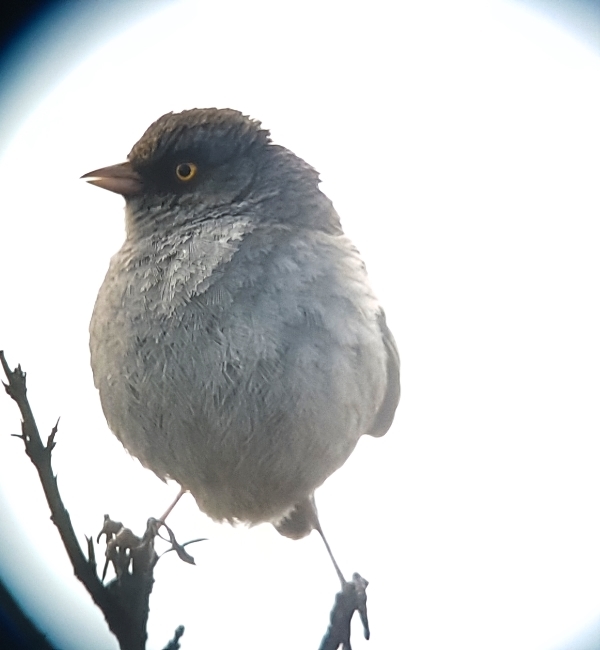 We piled back onto the bus and drove to the top of the track, we were now at the highest point that you can drive to in Costa Rica, which is 3300 meters approx.. 11,000 ft. A Volcano Junco popped out right in front of us and show no fear of us as it perched very close, some of the group were taking selfies with the bird it was that close!

Another high-altitude bird is of course our main target species the RESPLENDENT QUETZAL and Johan knew exactly where to find one. So, we drove a further 20 minutes along the highway (passing our turning to our next hotel) where we turned onto another track that led us down below the Paramo to forested habitat. 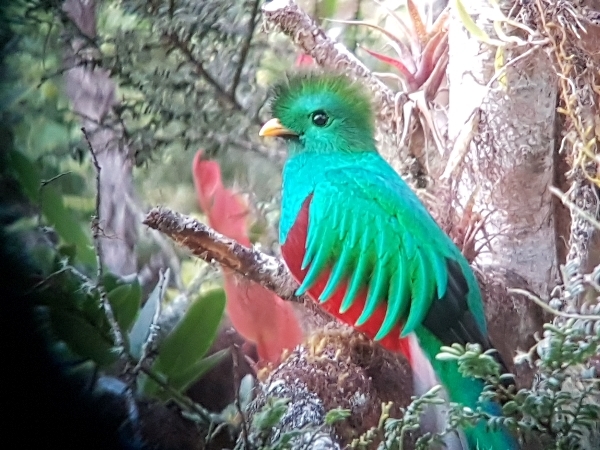 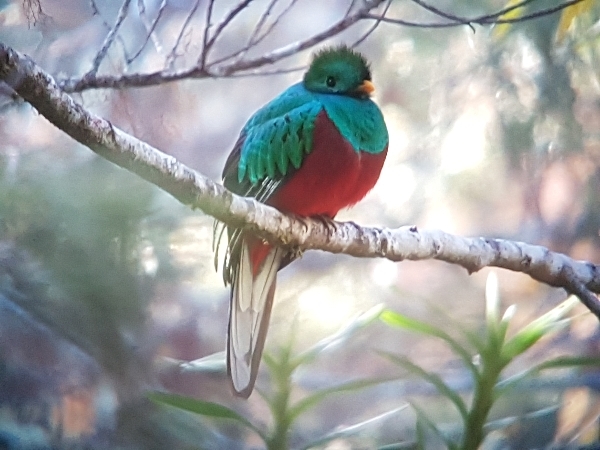 We spent a wonderful hour having the most wonderful views of the Quetzal, in fact three birds were present, all males with varying lengths of tail, differentiating their ages and maturity. One had the longest tail I had ever seen, Johan our guide was impressed too. We also added Collared Redstart to the list.

After that great excitement we turned the bus around and drove to the lodge which was situated in the San Gerardo de Dota Valley some 20 minutes away. A long and winding road led us down into the lush valley where the Savegre River begins its long journey to the coast. The river passes through the grounds of our lodge and its water is said to be the cleanest in Costa Rica and is used for many trout farms in the valley.

A lovely dinner was enjoyed  by all, our bird-log now stands at 405 species with three full days left.