What a lovely contrast to yesterday, we got up to brilliant weather, a clear sky, a beautiful sunrise and a lovely temperature. A quick scan of the birds roosting on the jetty produced Royal and Sandwich Terns, Laughing Gull, Ruddy Turnstone, Whimbrel and Spotted Sandpiper. Greater Frigatebirds and groups of Brown Pelicans drifted passed. 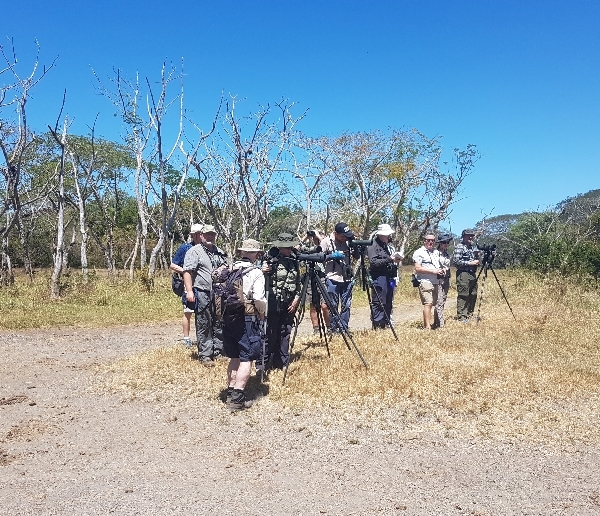 The group happily birding in the sunshine this morning

Our early morning walk took us in the rolling pastures (which are now completely dried out) and up to some dry woodland. We stopped to watch our first Spot-breasted Oriole, a Green-breasted Mango, Ruby-throated Hummingbird and a lovely Black-headed Trogon. The Turquoise-browed Motmot seemed to be very common whilst the Double-striped Thick-knee and the Eastern Meadowlarks were found where they are supposed to be in the meadows. 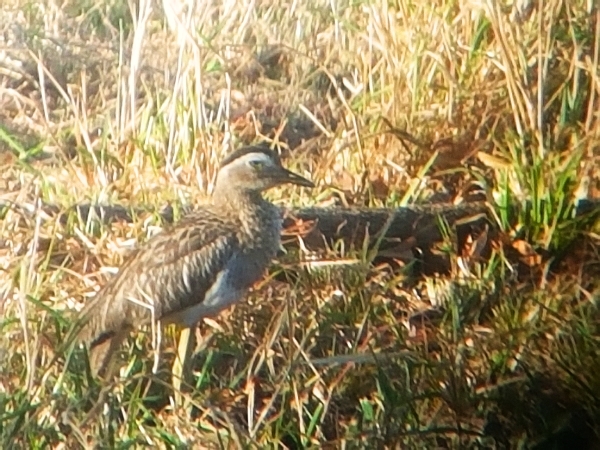 Further along the track we met with a couple of warbler species and a Yellow-throated Vireo as well as the Brown-headed and Olive-Green Flycatchers and a Wite-necked Puffbird. The Yellow-fronted Parakeets dashed about frequently whilst Streak-backed and Spot-breasted Orioles were everywhere. 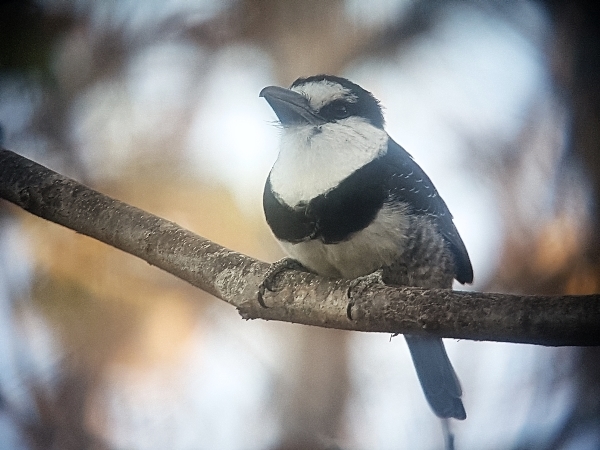 On the return walk to the lodge we found Stripe-headed Sparrows, Gartered Trogon and  a few other species. 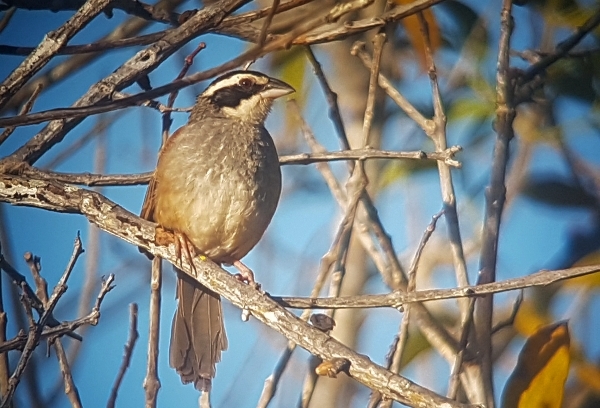 By 8:30 we had all taken breakfast and were on the bus for the short trip down to the private salt-pans, we stopped along the way to look for the Lesser Ground Cuckoo. We found Grey-headed Yellowthroat, a flock of Orchard Orioles and a couple of Roseate Spoonbills flew over before we heard the cuckoo calling. Despite 13 pairs of eyes and about 30 minutes of our time we failed to see the bird. 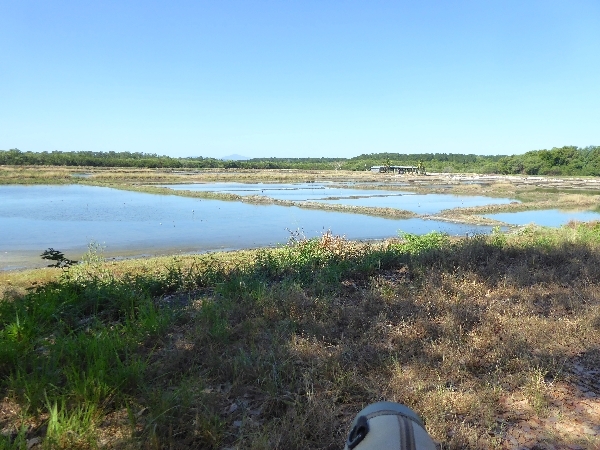 A section of the salt pans

So, onto the salt pans, we timed it perfectly so that the maximum number of birds would be there during this high tide period. It took quite a while to get everyone to see all the different species, in fact we were there over an hour just looking at waders, herons and egrets. We sorted out the Western form the Semipalmated and the Least Sandpipers. We pointed out the difference between the Semipalmated Plover and the Wilson’s and Collared Plovers. 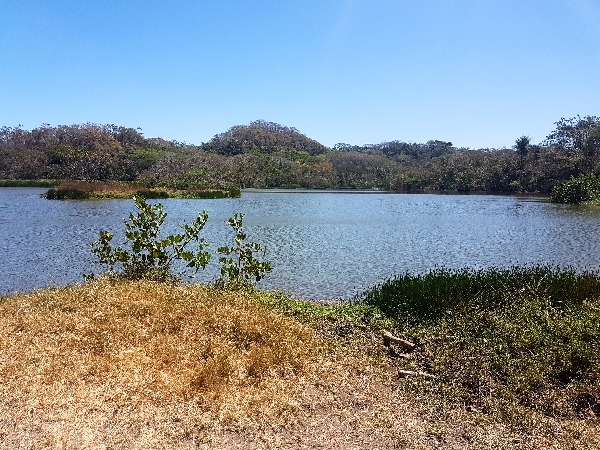 The track led us to a secluded lagoon which was covered in birds an Osprey circled over us as we approached the water’s edge. We didn’t venture too close as a number of Caiman and/or Crocodiles drift around the edge like floating logs.

During our long lunch some of the group walked down to the beach and came back with tales of excellent bird sightings, so, after lunch the rest of us trolled down there and we too found some goodies. 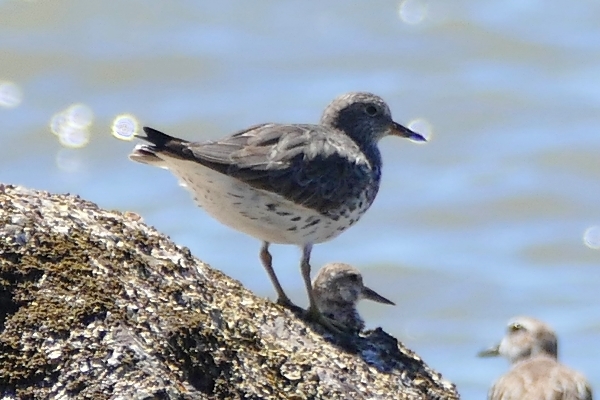 The Surf Bird was our best sighting we saw six of them together with Black-bellied Plover, Ruddy Turnstone and lots of Whimbrel. We saw a distant Marbled Godwit, a Green Heron and we searched for the Reddish Egret that had been reported earlier but we could not find it.

We all met up again at 3:30pm and after a short bus ride we walked a track that led us to another lagoon. We saw many of the species that we listed this morning, Black-headed Trogon, Turquoise-browed Motmot and many of the warblers. A couple of hours were spent searching the fields and hedgerows and dry-forest copse but we failed to find a Lesser Ground-Cuckoo. 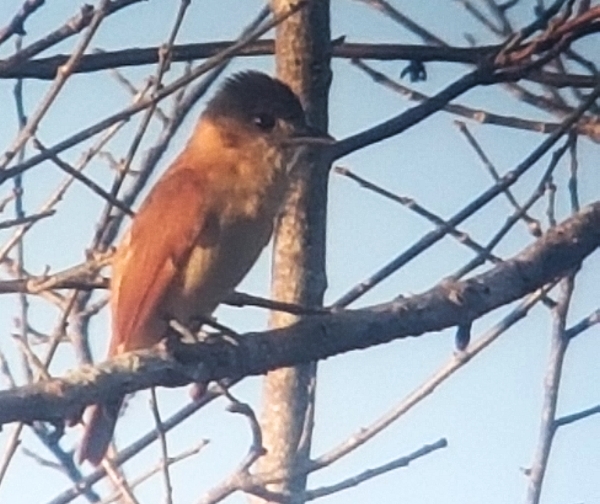 Record shot of the Rose-throated Becard

The jetty at the lodge was again deserted, just a few Spotted Sandpipers came to roost. 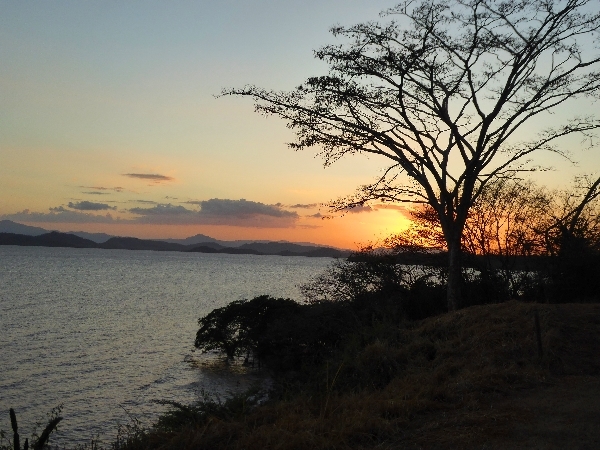 At 6:30pm just before dinner we took a walk in the dark along the main entrance track. Within minutes we heard a Pacific Screech-Owl and Johan soon had his torch on the area so that we all could see it.