Howler Monkeys were growling at 5am when we got up, a Ferruginous Pygmy Owl gave its monotonous peeping and the House Gecko was ‘tut’ tut’ ‘tutting’, a Rufous-naped Wren broke out into its beautiful, melodic chant, spoilt only by the harsh cry of the White-throated Magpie-Jay, all this welcomed us to a new day in Costa Rica.

It was another cloudless morning, with a lovely temperature and no wind. After a quick coffee we boarded the bus and headed out down the main track. We stopped at a site where we had heard the Lesser Ground Cuckoo call yesterday. The trees and hedgerows around a grass meadow were full of birds, mainly warblers and Orioles but we did see White-collared Puffbird, Squirrel Cuckoo, White-fronted Parrot and a Common Black-Hawk. 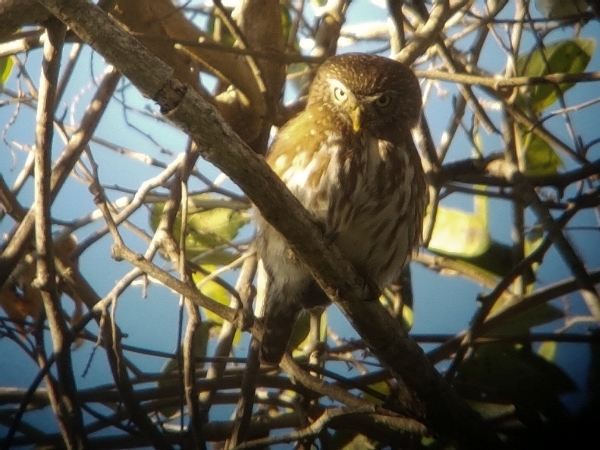 Prothonotary Warbler was a big hit with group and an American Redstart went down well to those that got on to it before it flitted out of sight.  But the cuckoo failed to materialise so we went away empty handed once again.

Back at the bus we watched a feeding flock turn into a ‘mob’ when a pair of Pygmy Ferruginous Owls appeared. We watched Tennessee, Yellow and Chestnut-sided warblers, orioles and gnatcatchers gather in the tree tops near the owl. 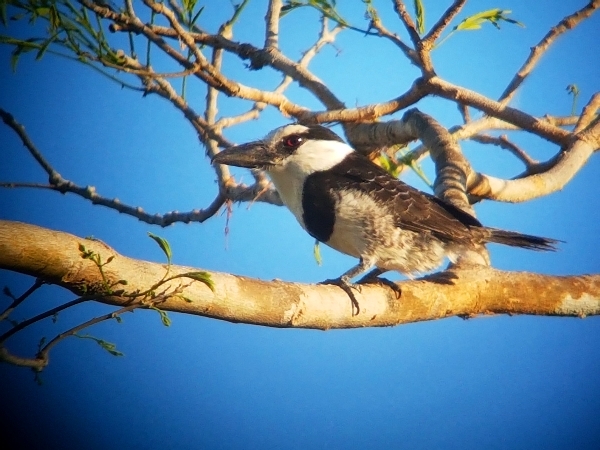 By 8:30am we were on the road heading down the track towards the main Pan-American Highway, we headed south for a short distance before turning west onto another track heading towards Chomes. We stopped along this track a number of times to look at a variety of species which included: Scissor-tailed Flycatcher, Gray Hawk, Blue Grosbeak, Scrub Euphonia, Plain-capped Starthroat, Collared Seedeater and Tricoloured Munia.

Chomes Shrimp Farm was as good as ever except that most of the ‘pools’ had been drained recently so fewer duck species were present. However, the wader numbers were impressive with good flock of Western, Semipalmated and Least Sandpipers, as well as smaller flocks of Short-billed Dowitchers, Willets, Whimbrels and Black-necked Stilts. 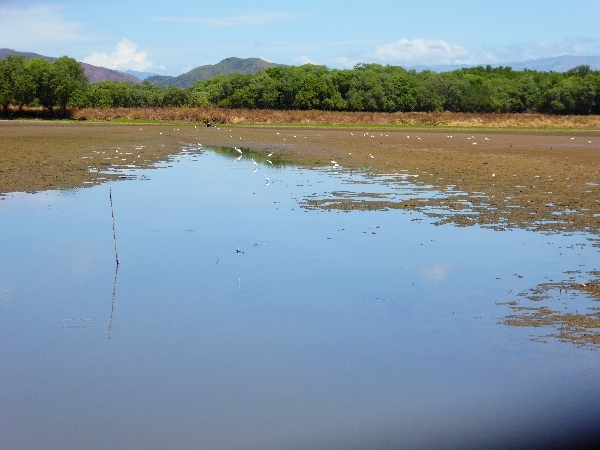 One of the drained Shrimp Pools

Even more impressive was the number of Black Skimmers, over 50 were roosting during this high tide period along with a good number of Royal and Gull-billed Terns and a single Caspian Tern. Herons and egrets, ibis and spoonbills and our first Ringed Kingfisher made up the remainder of our sightings at the shrimp farm. 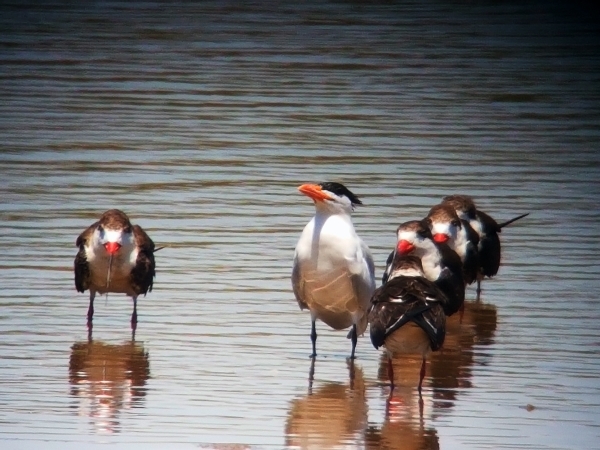 Before we left the area we walked to the beach and scanned the exposed mud as it became visible with the receding tide. We added a few species for the day list and a couple for the trip list, the most important was the Reddish Egret, it was a little distant but perfectly identifiable in the scope. Marbled Godwit was new for most of the group too. 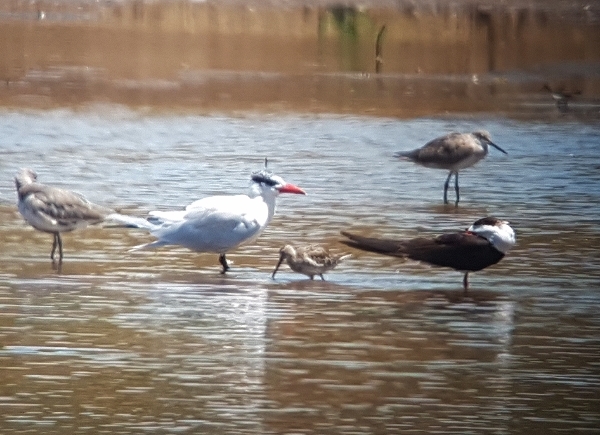 From Chomes we made our way further south, stopping at Caldera Port to scan a roosting gull flock, unfortunately the birds were roosting much further away than they normally do so it was impossible to identify or distinguish a Franklin’s Gull from a Laughing Gull, so we left disappointed.

We had lunch at a roadside restaurant before continuing our journey southward. Another diversion found us on yet another dirt-track leading westward from the main road, Johan knew of another site for elusive Lesser Ground Cuckoo. We tried hard to find one, we heard the call but only Johan and one other had very brief views of a shape, so it wasn’t recorded as a sighting. 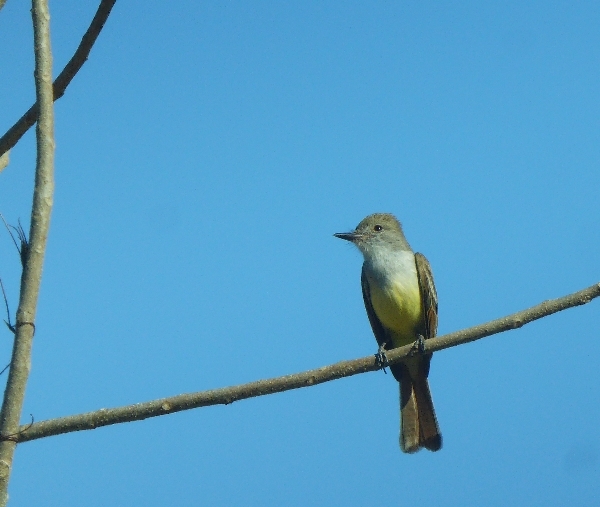 We had much better luck with Long-tailed Manakin, this bird showed after a couple of attempts to see it, in fact we saw a couple of them, a female and an immature male that didn’t have the extended tail feathers, nevertheless it was a great bird to have on the list. During our attempts to find both the cuckoo and the manakin we found: Nutting’s Flycatcher, Brown-crested Flycatcher, Slate-headed Tody-Flycatcher, Olive Sparrow and a good number of species already recorded on the trip. 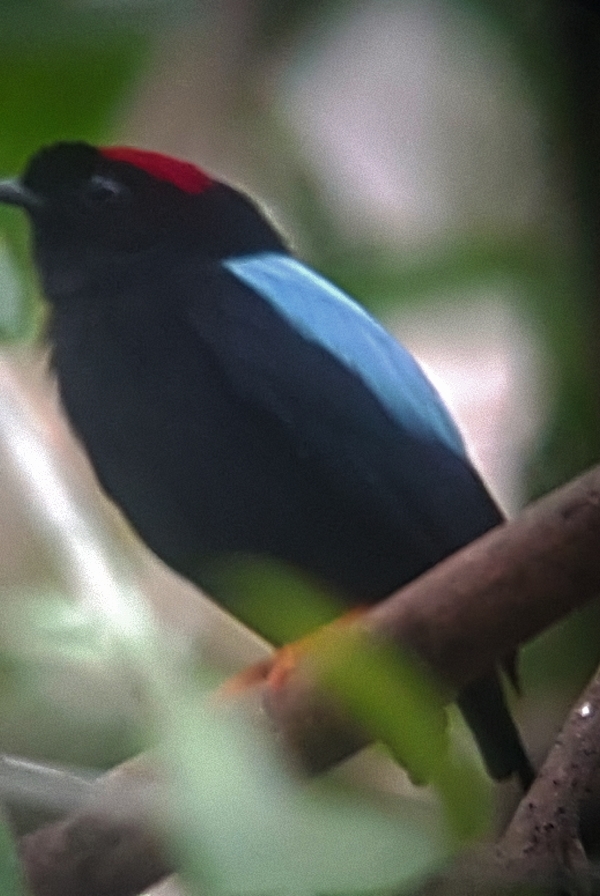 record shot of the Long-tailed Manakin

It was around 5pm when arrived at Cerro Lodge there was a magnificent sunset which we observed from the raised decking of the lodge’s restaurant. About 30 Lesser Nighthawks filled the sky as the sun went down, a great species to finish off another wonderful day in this birding paradise.