We had a smashing start to the trip having all arrived yesterday we were fresh and raring to go. So, at 7:00am we met in the hotel reception area and began listing birds in the garden and driveway of the hotel. There were far more birds around than I had anticipated and within the hour we had listed 30 species, I can’t believe how good an introduction to Costa Rica this was for my clients.

The lush gardens of the hotel

The national bird of Costa Rica is the Clay-colored Thrush and they were everywhere, dozens of them, the same went for Tennessee Warblers they seemed to like feeding in the palms near the fresh clumps of palm nuts. A couple of Yellow Warblers brightened up the scenery too as did Baltimore Oriole, Blue-gray Tanager, Summer Tanager and our first Hummer, the Rufous-tailed Hummingbird.

Cl;ay-colored Thrush in the morning sunlight

Further sightings were made in the more mature trees along the driveway and in the garden hedgerows, we found our first Woodpeckers, a family party of Hoffman’s Woodpeckers were very noisy but the much larger Lineated Woodpecker was silent. The Rufous-naped Wren, a real beauty, was a crowd pleaser, we saw at least 8 of them with two pairs making nests, it was interesting to see that last year’s off-spring were also helping with the building of the nests. 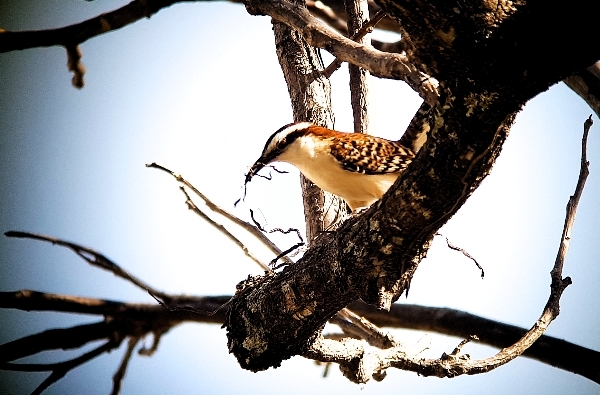 Birds of prey started to appear over the gardens, we saw Grey Hawk, Roadside Hawk and both Black and Turkey Vultures, a Great Blue heron flew over and both Blue and White and Northern Rough-wing Swallows flew around the hotel buildings. Other birds came along at regular intervals, we saw Great Kiskadee, Tropical Kingbird, Squirrel Cuckoo, Buff-throated and Black-headed Saltators and Rufous-collared Sparrow. 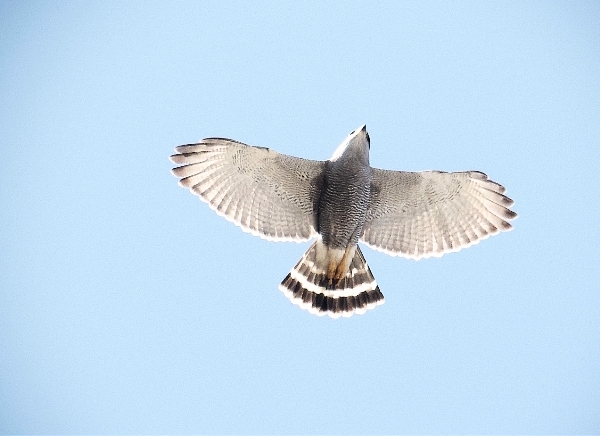 Gray hawk - flying over the hotel, taken by Richard Pettett

Our bus and guide turned up on time and before 10am we were off, the tour had begun! We drove up[ into the highlands just below the Poas Volcano and stopped at roadside restaurant called Freddo Fresas. What is special about this restaurant is that it had a flower garden with bushes and trees and most importantly, it has hummingbird feeders. We were there to see the Purple-throated Mountain-Gem and that is exactly what we did. Other ‘hummers seen were Violet Sabrewing, Lesser Violetear, Talamanca Hummingbird and Green-crowned Brilliant.

on the 'Galera de Colibries' at Cinchona, Valle de Virgen

Apart from the hummers we found a lot of species already listed this morning, a few new species appeared, we saw Mountain Elaenia, Paltry (now Mistletoe) Tyrannulet and Wilson’s Warbler.

We drove further up into the hills and turned onto a road which led down into the Virgen Valley, we were now in the clouds so most of the beautiful scenery was lost to sight. Along this valley we pulled into a roadside restaurant for lunch, a place where a platform terrace juts out over the steep valley, where a dozen or so feeding stationed were positioned right next to the platform. We had wonderful views of dozens of species, there was so much activity going on. 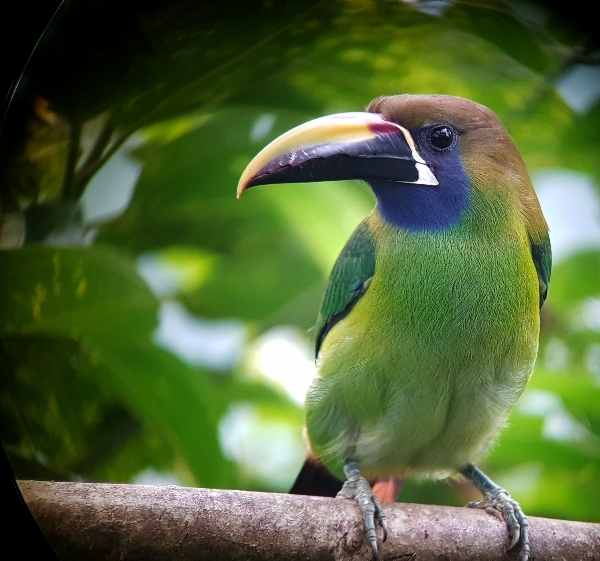 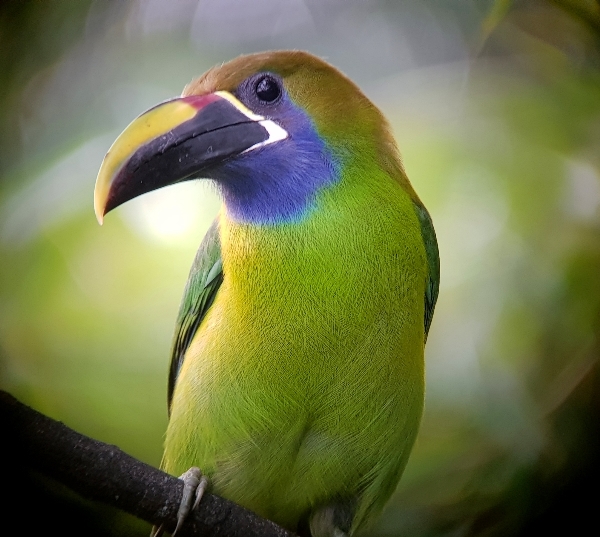 We ordered and ate a lovely lunch whilst watching some superb species. The Northern Emerald Toucanet was particularly appreciated by the group but also the very common Silver-throated Tanager, the unexpected Buff-fronted Quail-dove, the Chestnut-crowned Brush-Finch and a good number of other species.

Hummers were the stars of the show, in particular the Endemic Coppery-headed Hummingbird, but also, Green thorntail, Green Hermit and Green-crowned Brilliant. 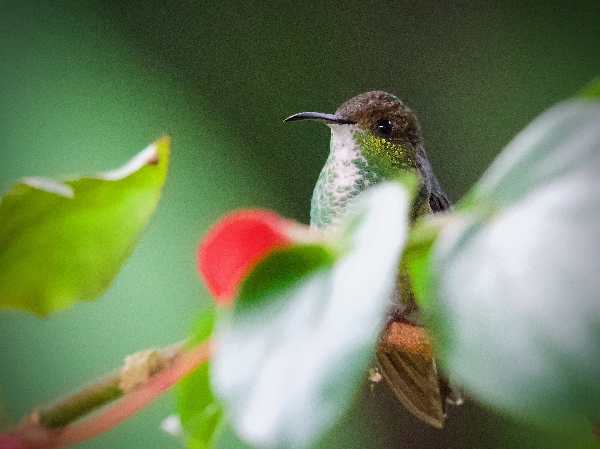 It was getting late in the afternoon but we still had time for walk in the valley, so we drove to a track that led all the way down to the river and we saw some great species along the way. A few American Warblers appeared, the stunning Black-throated Green Warbler was enjoyed as well as Blackburnian, Golden-winged, Chestnut-sided and a few of the stunning Tropical Parula. We had great views of Yellow-throated Toucan, Crested Guan, Golden-olive Woodpecker, Slaty-throated Redstart and Variable seedeaters.

A couple of nice raptors were found, a very distant Laughing Falcon was ‘scoped from the track and then Mervyn found a White Hawk, he tracked it until perched and then showed the whole group, all having great in the ‘scope views. 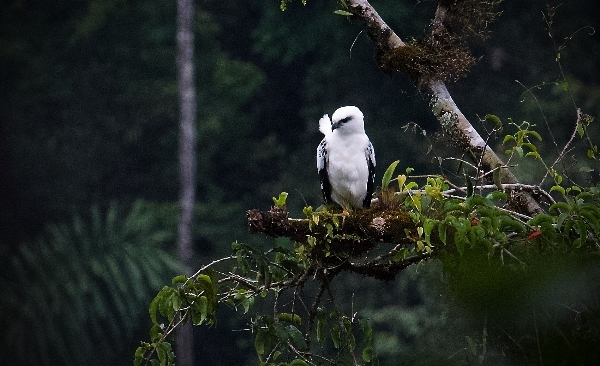 the ghostly White Hawk - another of Richard's photos

At the river we enjoyed American Dipper, Black Phoebe, Tufted Flycatcher and a bit of patience was rewarded with views of Sooty-faced Finch, a real great species for the list. We tried to call out a Nightingale Wren without success, in fact, Wrens weren’t very obliging at all as we also heard Bay wren and Black-throated Wren without seeing them either.

We drove all the way back to the suburbs of San Jose to our next hotel, it was dark when we arrived and so the birding for day one was over, we had seen over 70 species, not a bad start, a great introduction to central American birding.

A few of us ventured out after dinner and discovered a Pacific Screech Owl, at least two were calling but we got very good views of one them.