Our day started with a walk around the grounds and along the lane just outside the hotel which was full of birds. The Turquoise Motmot seems to be common, we also saw a Lesson’s Momot and our first Blue Black Grosbeak. Wrens and flycatchers popped up here and there and of course the huge Scarlet Macaw flew noisily over the hotel. It was a short walk, with about 20 species seen, we were sitting down to breakfast around 6:45am. 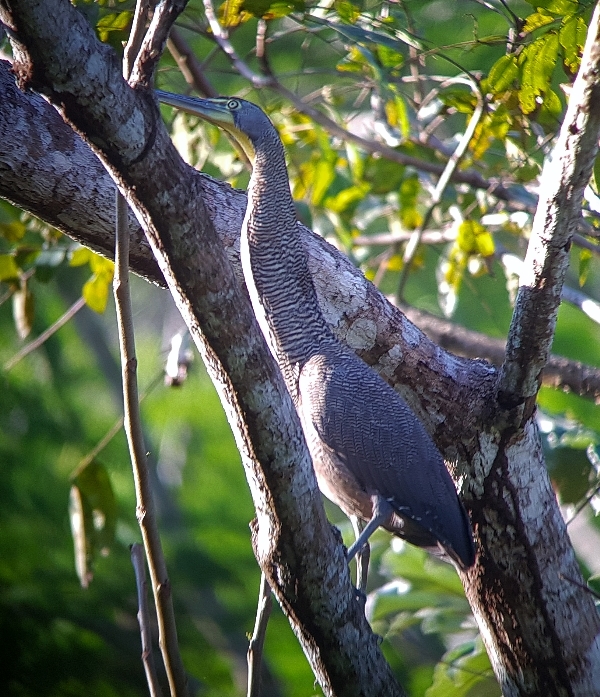 The Bare-necked Tiger Heron seen in the gardens

An hour later we were pulling into the car park at Carara. Carara National Park protects a vast area of tropical rain forest and an extensive network of trails allow you to see a good deal of it. We spent some time in the car park looking for a Bright-rumped Atilla that was calling none stop from the canopy but we failed to see it. 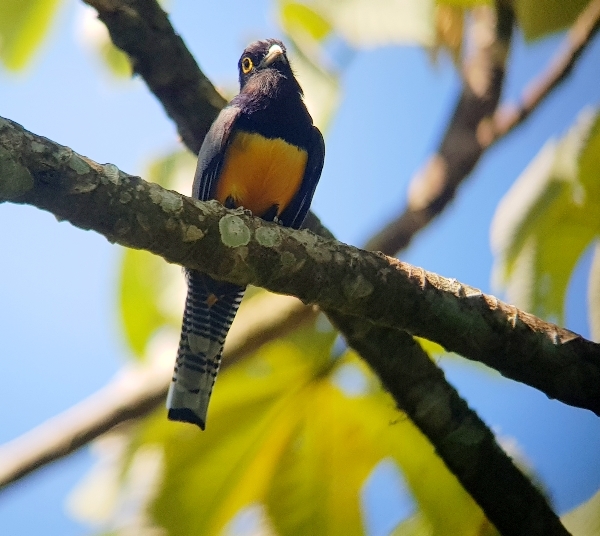 Over the next 3 hours we walked slowly along the ‘River’ trail stopping to watch birds, butterflies, mammals and reptiles, it was a glorious morning with a lovely temperature although it got very warm after 10am. We started see antbirds and antshrikes as well as Manakins, Trogons, Tanagers and Flycatchers. The Barred Antshrike is a particular favourite of mine, we saw the stunning male, also Black-hooded Antshrike, Dot-winged Antwren and Dusky Antbird. 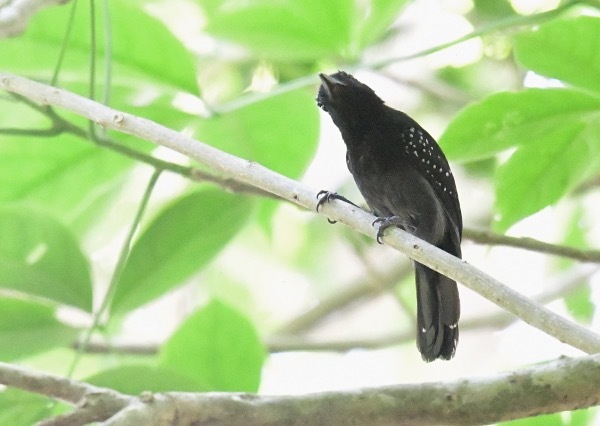 The Orange-collared Manakin was a favourite of the group and the Gartered Trogon sat out nicely for us. Lots of other birds appeared briefly in the scrub or the canopy, it was difficult birding and almost impossible to get everyone in the group onto every bird. A Flyover Black Hawk-Eagle was a nice find as was a flock of Costa Rican Swifts. We saw Yellow-naped Woodpecker, Wedge-billed Woodcreeper, White-whiskered Puffbird, Lesser Greenlet and a couple of hummers, Ruby-throated and Scaly-breasted. 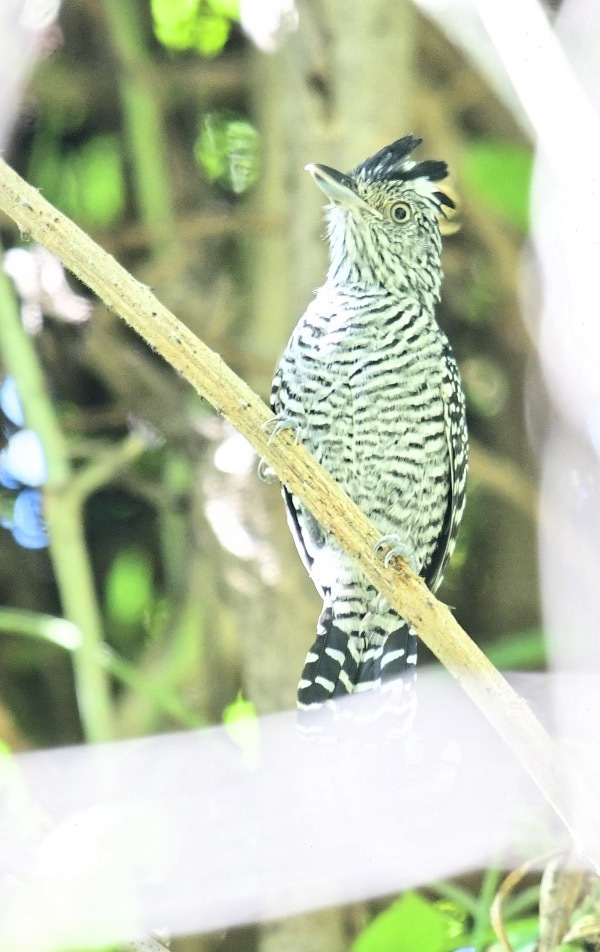 Other wildlife seen included the Northern Ghost Bat, lots of Iguanas, White-faced Capuchin Monkey and lots of very colourful butterflies. We left the forest around 10:30, it had gone quite quiet so we headed off into Tarcoles to visit a couple of areas of mangrove swamps to look for Mangrove Vireo and perhaps the endemic Mangrove Hummingbird. 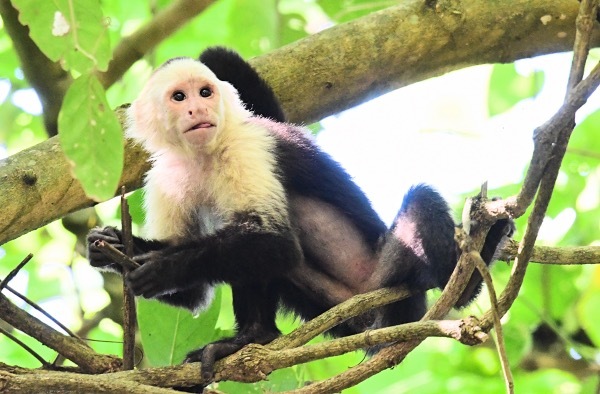 Tropical Pewee went onto the list for the first time, we saw a nice selection of flycatchers but not the Mangrove Vireo. At one stage we walked out onto the beach area near the mouth of the river Tarcoles and watched the antics of the Magnificent Frigatebirds, the pirates of the sea. We also saw Brown pelicans and a sandbar held many terns, mostly Royal Terns but a single Elegant Tern sat with them. One great find was that of a Reddish Egret, not in summer plumage but you could make out the reddish colour of the neck and chest. 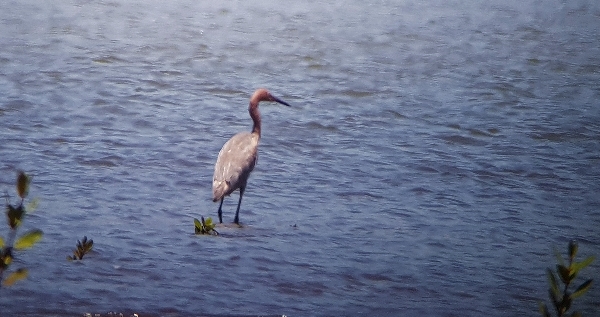 We ate lunch in Tarcoles before returning the hotel for a midday break. In the afternoon only half of the group decided to stay at the hotel and just six of us left for a second visit to the Carara National Park. The going was slow at first, we picked up a few species as we ambled along the well-made paths. Orange-billed Sparrow, Turquoise-browed Motmot and Cocoa Woodcreeper went on the list first. 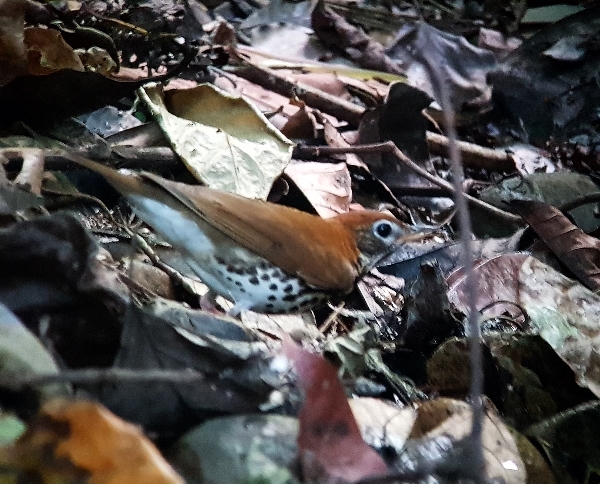 A Great Tinamou gave unbelievable views at the side of the path before we found a Chestnut-backed Antbird. From a bridge over a stream we watched a swarm of Green Page Moths (they look like large black and green swallowtail ,butterflies) and were obviously gathering to mate. 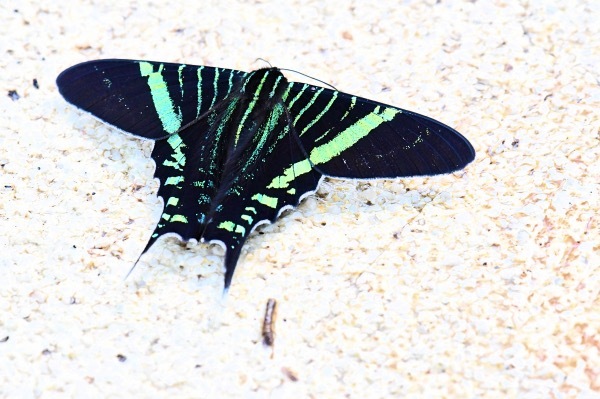 It was around 4pm when we arrived at our target site which was a slow moving stream with small pools, this is where a number of birds come to bathe in the late afternoon, especially manakins. We stood in silence for about 45 minutes watching an incredible collection of birds come down to drink or bathe. The Red-capped Manakin was the star, what stunning bird, the Blue-crowned Manakin is another stunner and put in an appearance. 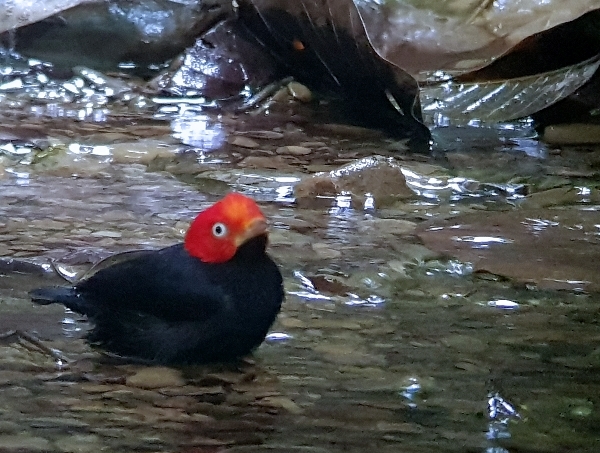 Manakins - Red-capped above and Blue-crowned below 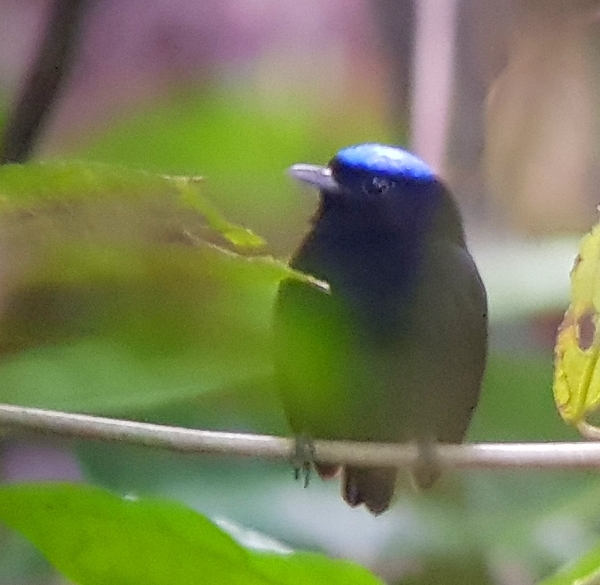 Other birds seen at the bathing pools were Sulphur-rumped Flycatcher, Wood Thrush, Northern Schiffornis, White-tipped Dove and an Agouti. 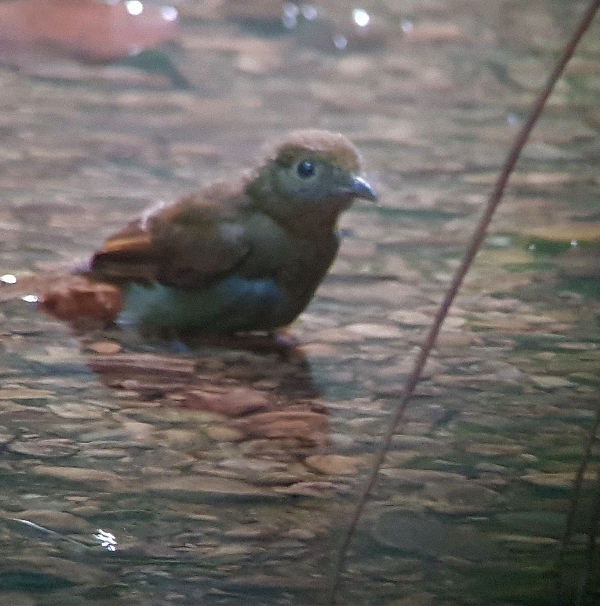 We left the pools just before 5pm and made our way out of the forest, but not before stopping to watch a Riverside Wren and to our great delight a Black-faced Antthrush walked across the path in front us, I was at the back so I missed it but the rest of group saw it. An amazing bird to finish off the day’s birding.