It was a glorious  start to our second day in this tropical paradise, it was also a very early start! It begins to get light at 5:30am we were all out in the garden just before six. The extensive gardens have manicured flower beds, open grass lawns, ponds, scrub  and mature trees. We had a couple of main targets species and spent most of our time in the areas where these species are found.

we woke up to this at 5am

The Rufous-capped Warbler is one of the few resident warblers in Costa Rica, we had short glimpses of it for a while then a pair showed very well, in the past all my sightings were of them on the ground but these today stayed in the canopy of the bushes! The White-eared Ground-Sparrow was much harder to find but Johan was persistent, everyone got to see this species really well. It is 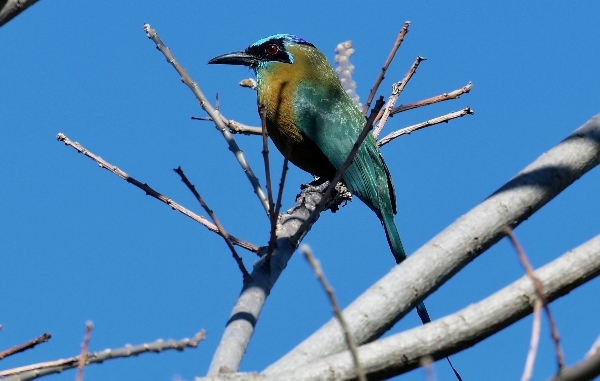 Lots of other species kept us busy too, we watched our first Grayish Saltator, White-tipped Dove, Lesson’s Motmot, House Wren, White-fronted Parrots and many other species that we had listed yesterday we also on display. 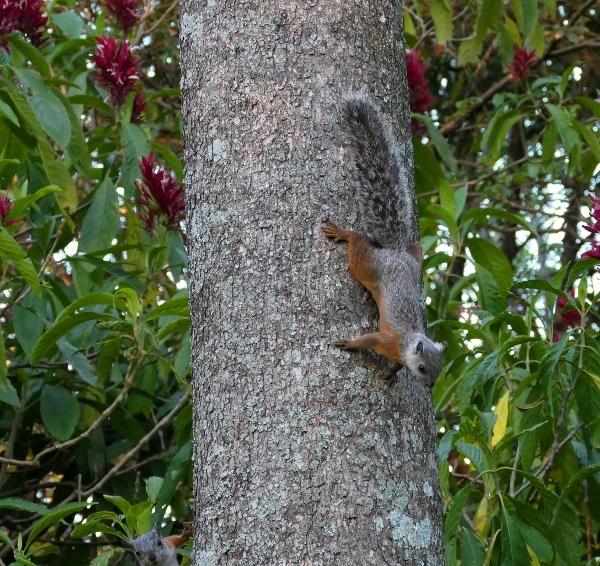 A lovely breakfast just after 7am was followed by a quick exit from the hotel (and yes, we did pay our bills before we left)! We only drove 500 meters from the hotel when we turned onto a side road and parked up. Our aim was to find a Cabanis’s Ground-Sparrow  recently split from Provost’s Ground-Sparrow and now endemic to Costa Rica. Its limited range is in the central valley in small coffee plantations is under threat as more and more plantations are abandoned.

We never had a sniff of the Ground-Sparrow but we did see a few extra species for the list. A White-tailed Kite  (very similar to the black-winged Kite of the Western Palearctic) flew over us and then we found a couple of Yellow-headed Caracaras. A Cabanis’s Wren (formerly Plain Wren) called from the hedgerow but it never showed. 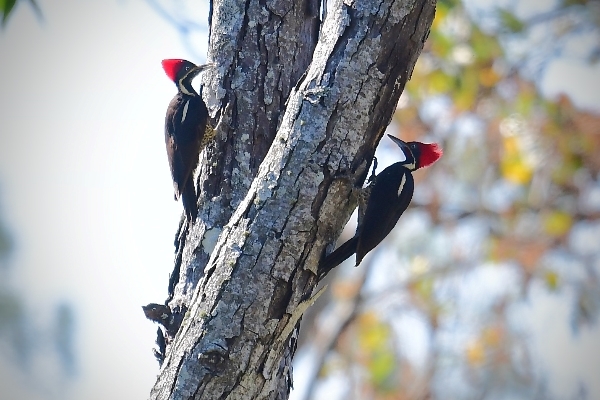 A flowering tree held Melodious Blackbirds, Baltimore Orioles and Rose-breasted Grosbeak, we then found both Hoffman’s and Lineated Woodpeckers and another pair of Grayish Saltators. We walked into a coffee planatation and found 3 Lesson’s Motmots and not much else. On the way back to the bus we found a Smooth-billed Ani and a few Vaux’s Swift flew over, both were additions to our list.

Major road works along the highway to the Caribbean side of the island made progress very slow, we eventually arrived at Braulio Carrillo National Park around 10:30pm. We then spent the rest of the morning walking one of the main trails through the most fantastic tropical rain forest, it was the first time I had visited Braulio in sunshine!! 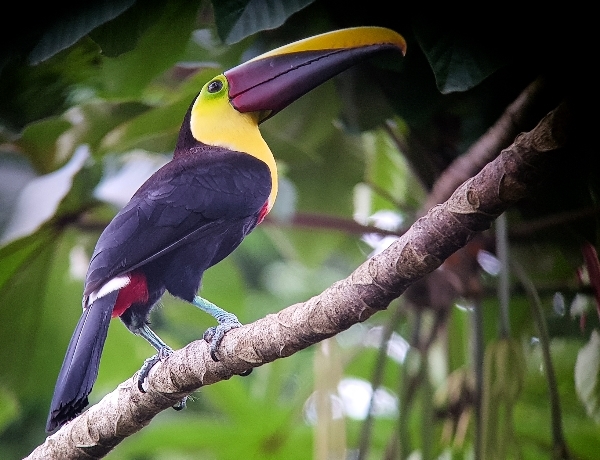 However, the good weather did mean more sightings, in fact, it was pretty quiet exactly as it was during the last few visits. We saw about 6 species in 1 ½ hours and heard a few more. The highlight was the sighting of the car park after our walk! That’s not strictly true

We did see Black-faced Grosbeak, Tawny-crested Tanager, Broad-billed Motmot and we had very brief views of Tawny-capped Euphonia, Chestnut-sided Warbler and Ochre-bellied Flycatcher. A Dull-mantled Antbird never showed d I forgot to mention the sighting of a King Vulture just after we arrived. 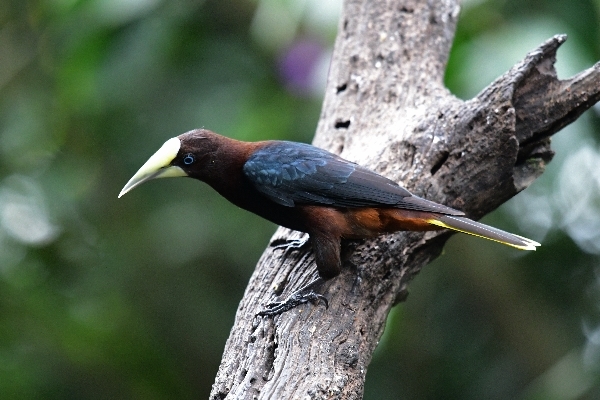 Our attempt to look for the beautiful hummingbird called the Snowcap was thwarted by a locked gate at the usual site, so we drove down to the Caribbean lowlands and went for lunch in a superb roadside restaurant where a delicious lunch was had by all. We even had the audacity to add House Sparrow to our bird list! 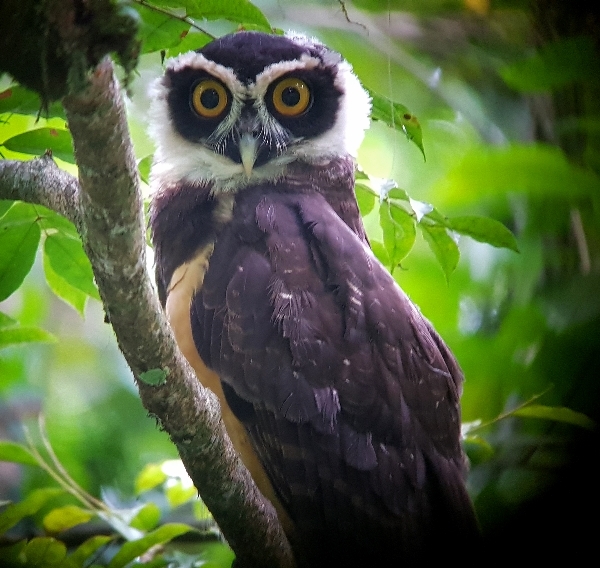 The afternoon birding was a hundred times better than the morning’s we saw many more species with some excellent goodies too. Our first stop after lunch was an area of old woodland near the village of ‘La Union’, as we jump down off the bus we found Yellow-throated Toucan. We were joined by a local guide who led the whole group into some very interesting woodland, we were guided straight to a pair of roosting Spectacled Owls, they looked magnificent sitting high up in their chosen tree. 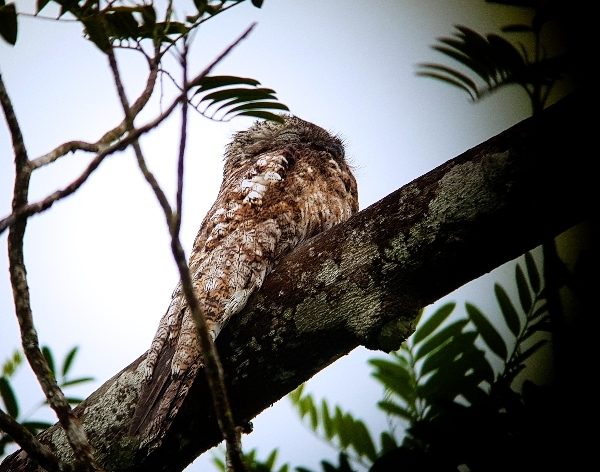 Next, we were shown a small group of five roosting Hondurian White Tent Bats, they were ghostly white and tiny, all huddled together under a a large leaf on a banana tree. We followed that with a visit to another part of the wood where the local guide showed us the nest of the Long-billed Hermit, it was amazingly delicate, with 2 or 3 chicks huddled inside. 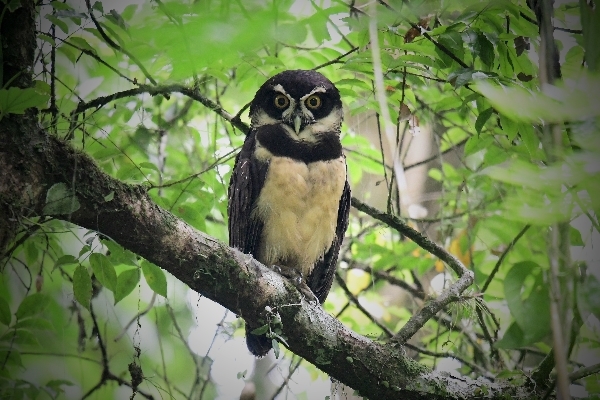 The guides then spent some time in another woodland looking for a Crested Owl but this time they up with nothing, so we hoped back onto the bus and drove for another twenty minutes. On a dirt track in the middle of nowhere the local guide stopped the bus and we all piled out whilst he pointed to a Great Potoo sitting on a bough up in a road-side tree. Nearby, we saw Montezuma’s Oropendula, Pale vented Pigeon, Ruddy Ground Dove and Green Ibis. Whilst watching the Ibis we found a pair of Orange-chinned Parrots and a Lineated Woodpecker. 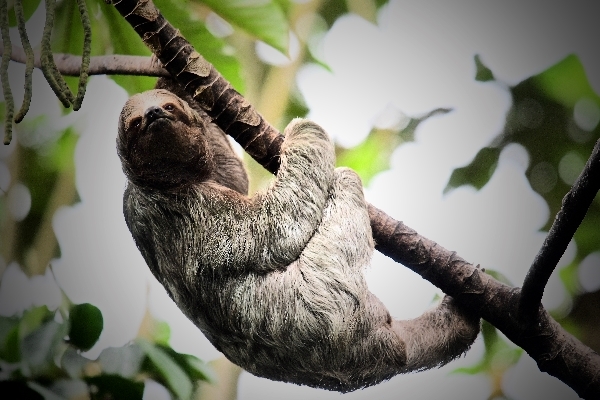 The best was yet to come! We drove back to La Union and turned off onto a side road and stopped outside the, now famous, Cope’s Nature Garden where a local bird guide and artist had set up an amazing hide overlooking a poll and several feeders. Well, my group were simple blown away by the bird activity there, it was like Picadilly Circus in rush hour. 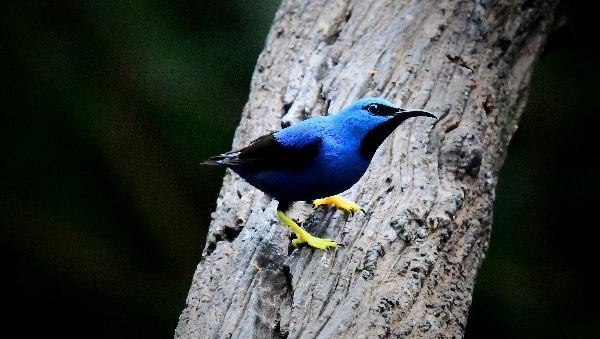 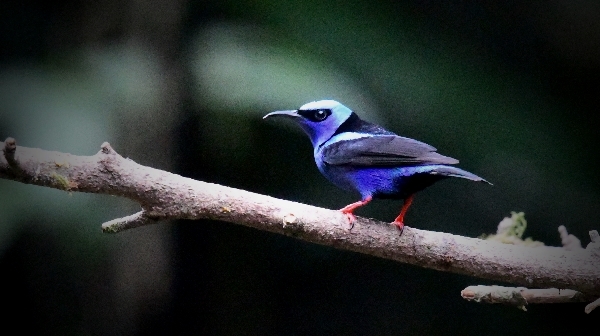 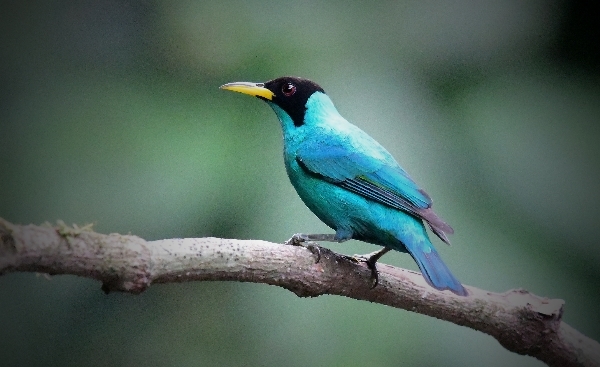 Dozens of birds were visiting all the time, I can’t recall how many species but I bet it was around 25! We added a few new Hummers to the list: Brown-tailed Plumeleteer, Long-billed and Stripe-throated Hermits, Crowned Woodnymph and White-necked Jacobin. Thgree species of Honeycreeper appeared, Shining, Red-Legged and Green Honeycreepers. Both of the Oropendula Species showed well as did Collared  Aracari (5 at once).

A normally secretive Wood Thrush sat right out in the open, wow, what a stunning looking thrush. Bananaquit, Crimson-collared and Scarlet-rumped Tanagers joined the common species, it was truly a fantastic hour or so. To top it off a Three-toed Sloth came into view and showed extremely well, we saw it feeding on some bean-like fruit. A second Sloth was found just after. We also saw a Casque-headed Basilisk Lizard and outside whilst in the street we saw Mealy and White-crowned Parrots, Variegated Seedeater, both common vultures and Social Flycatcher.

We left the amazing Cope’s Garden at 5pm and reached La Selva just before 6pm. Dinner was taken at 7pm and after we called the log we went outside of the dining hall and found a Common Pauraque, a lovely nightjar to finish off the day’s list.