WEATHER: what difference a day makes! We had strong blustery winds all night with bouts of torrential rain, this continued until about 8am. Then we had broken sunshine, very light showers. Temp 20C
We had a day of mixed fortunes and the weather had a lot to do with that. Our pre-breakfast morning walk was abandoned before it even started, the lodge and surrounding area was completely enshrouded in mist, it was windy and raining.
So, we went straight into breakfast at 6:30am and departed for Arenal Observatory around 7:45. We saw a few species along the way the best were on a river, we saw Green Kingfisher, Louisiana Waterthrush and Neotropic Cormorant.
Once in the grounds of the Observatory we had a quick look at the feeders which were very disappointing, we only saw  a couple of birds there before we walked down into the gardens around the accommodation chalets. After a short while we found our main target bird, the tiny Black-crested Coquette, what a little beauty, we also found a few other hummers feeding on the same flowers, Scaly-breasted, Rufous-tailed, Violet-headed Hummingbirds and a Green Thorntail. 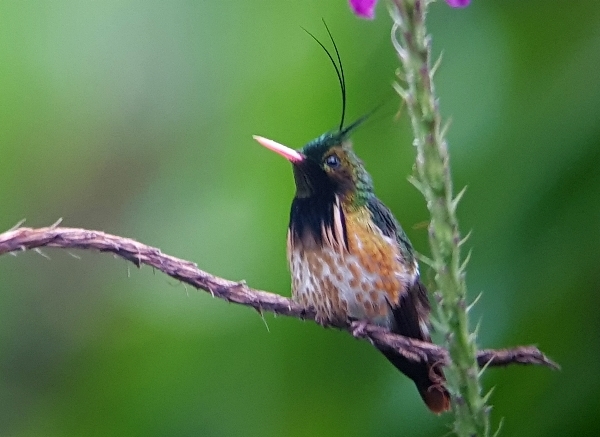 Black-crested Coquette
Our first walk on the trails was quite birdless, we did hear a few species but saw very few! We found our first Emerald Tanagers and saw Scarlet-rumped Tanager, we heard both Stripe-breasted and White-breasted Wood Wren and we spent a lot time waiting in hope of seeing a Thicket Antpitta. This bird was calling incessantly and came very close to the edge of the dense forest undergrowth but only one of the group managed to see it very briefly. 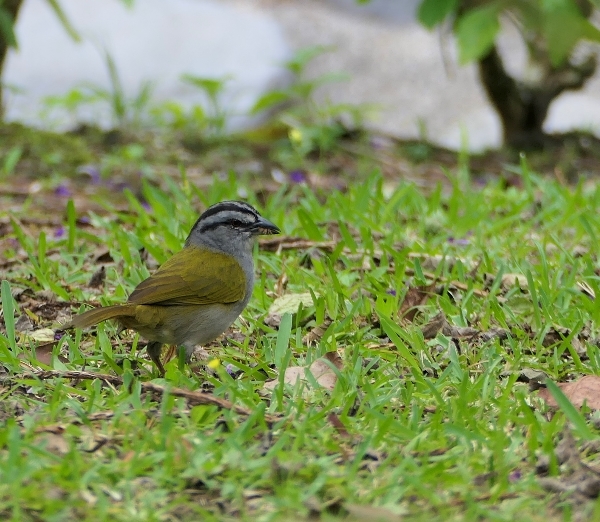 Black Striped Sparrow - taken by Ray Marsh
We then took a another track and to our great fortune we bumped into an ant swarm, not for those who stood in the swarm without realising it. But, several birds we seen around the swarm, these are Antbirds and they follow the swarm, not to eat the ants but catch any insects that jump up to get out of the way of the ants! We saw several Spotted Antbirds, Great Antshrike, Bicoloured Antbird and the real star, an Ocellated Antbird. 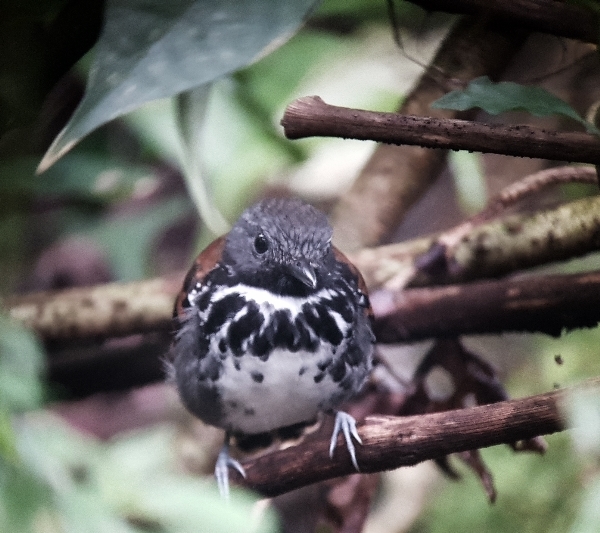 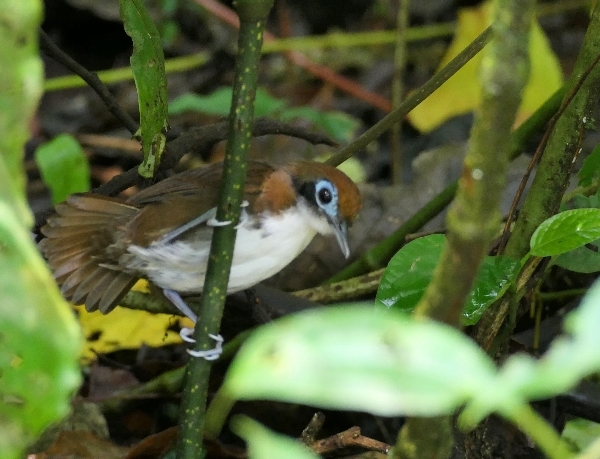 Great Antbird - taken by Ray Marsh
We left the trails and headed back to the main reception area and spent a little time at the feeders where we added Golden-hooded, Blue-gray Tanagers, Red-legged Honeycreeper, Crested Guan and Montezuma Oropendola. A second walk along the main entrance track produced little else, we did see a Rufous-winged Woodpecker digging out a nest hole and that was it.
We had a lovely lunch in the main restaurant before setting off on our main walk down the ‘waterfall’ trail. We went via a new trail which led us steeply downhill from the gardens, it went along way down but fortunately the track then took a turn onto a very gradually sloping pathway back into the forest. We saw ziltch on that walk!! Then we came to a lookout tower and a group of people were photographing an Eyelash Pit Viper and that was our only excitement on that walk. 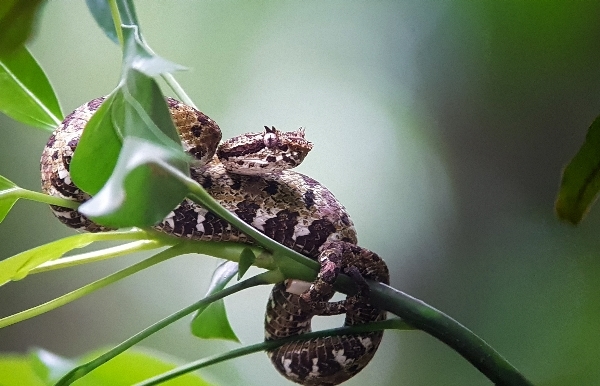 the venomous Eye-lash Pit Viper
Along the way to the ‘waterfall’ trail we found Smokey Brown Woodpecker, two of the group saw a Great Black-Hawk just as we set off. The trail was a real disappointment, we walked along way for very little reward, it was quite windy and rain threatened but did not materialise. There were a few ‘heard only’ species and one or two brief views, we did see Golden-crowned Warbler, Buff-rumped Warbler, Broad-billed Motmot and that was about it. Nightingale Wren was heard, Scale-crested Pygmy-Tyrant and a couple more wrens called but were not seen. 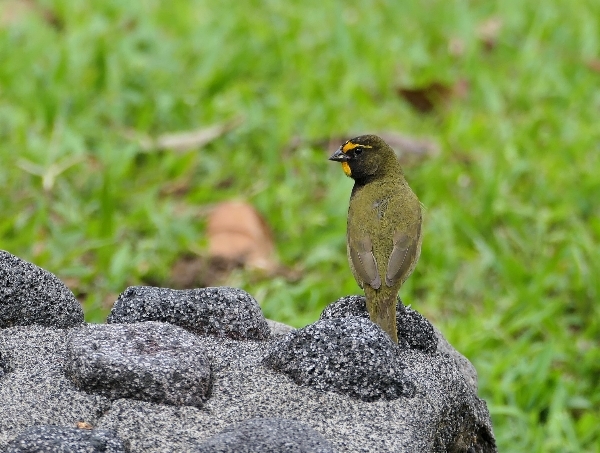 Yellow-faced Grassquit - another photo taken by Ray Marsh
It was about 3pm when we left the Observatory, we took the scenic route back to Arenal Lodge which was a bumpy track that followed the contour of the huge reservoir. We stopped several times to look for Kell-billed Motmot, we did see our first White-throated Magpie Jays and Crimson-collared Tanagers but not much else until the very last stop.
Finally we found a large mixed feeding flock, it was great and although most of the species were in the canopy we manged to get onto most of them, some were seen in the ‘scope.
A party of very noisy White-faced Nunbirds came first, then a few tanagers. Johan then quickly picked out Slay-capped and Yellow-bellied Flycatchers, Black-and-white Warbler, Rufous Piha, Cocoa Woodcreeper, Rufus-winged Woodpecker and several other species. 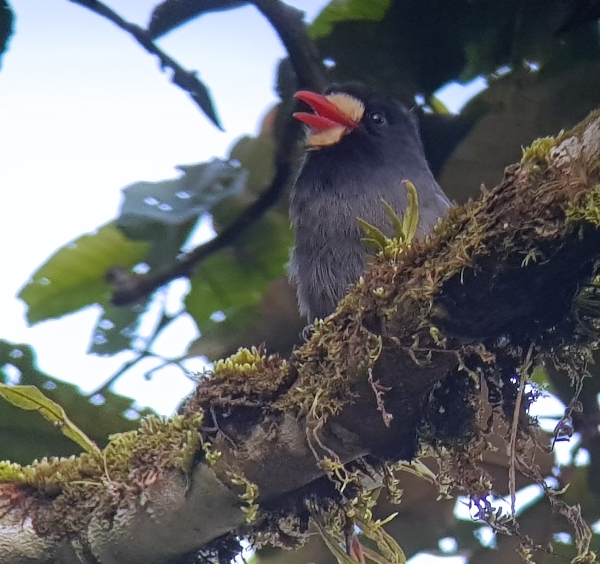 White-faced Nunbird
We then finished our birding for the day by finding the Kell-billed Motmot and a Great Potoo!! 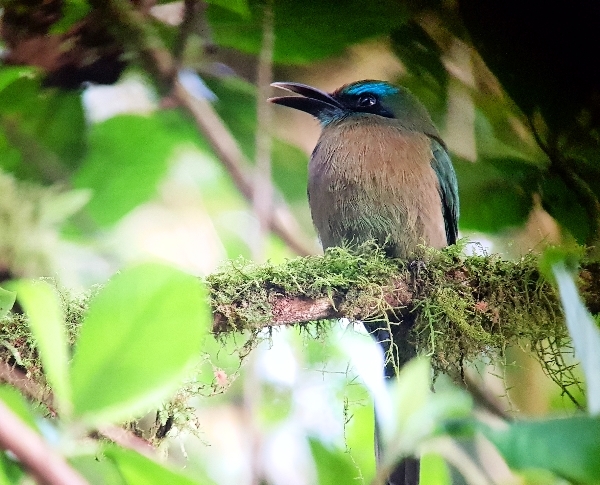 Keel-billed Momot
An exhausted group made it to dinner at 7pm, we quickly went through the bird log afterwards, a little bit of excitement followed when a Red-eyed tree Frog was found in the flowers in the bar! We had another early night, I was asleep by 9pm.