We had a fantastic day today, a venue new to the WINGSPAN TOUR with plenty of new sightings to the trip. We travelled quite far and spent a lot of time in the bus, but it was worth it because of the sightings we made when we got there. We travelled to Cano Negra where we took a boat cruise along the river and down through open marshes which were covered in birds.

But before we left we had excitement just outside the breakfast room when a Tayra appeared near the feeders, this a small mammal in the weasel family and is not easily seen in Costa Rica. 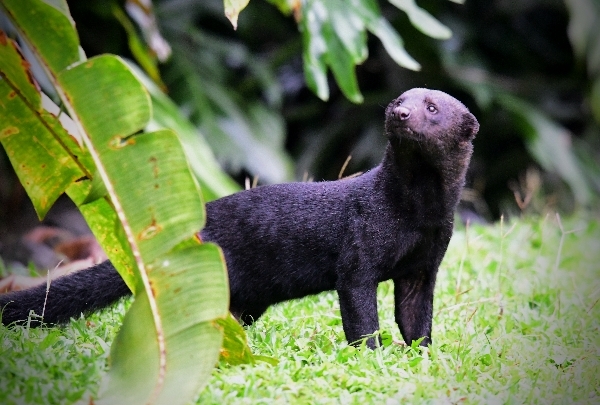 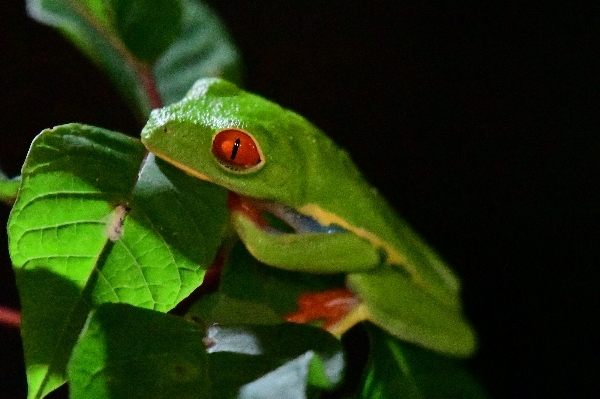 As we approached Cano Negro we drove past open meadows with marshland and small pools and we started listing new birds out there. We found Bare-necked Tiger Heron, Northern Jacana, Ringed Kingfisher, Snowy, Great and Cattle Egrets. 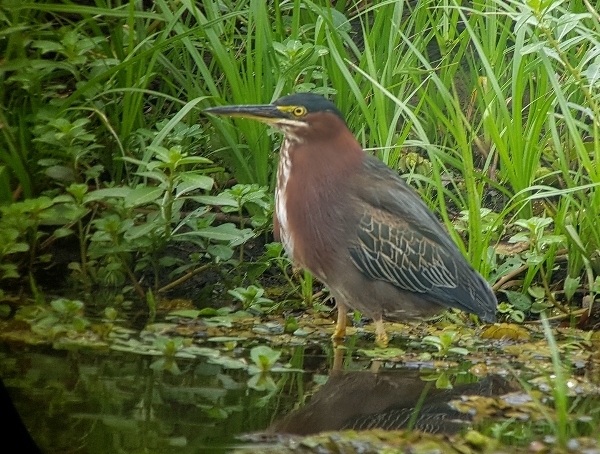 Green herion taken from the quay at Cano Negra

Once on the boat the birds just kept on coming, we had a wonderful time and spent nearly 3 hours out there on the river. Our most wanted species turned up about halfway through the trip, the SUNGREBE, we got fairly close to one of them and even saw its strange black and white feet as it climbed up into a shrub. 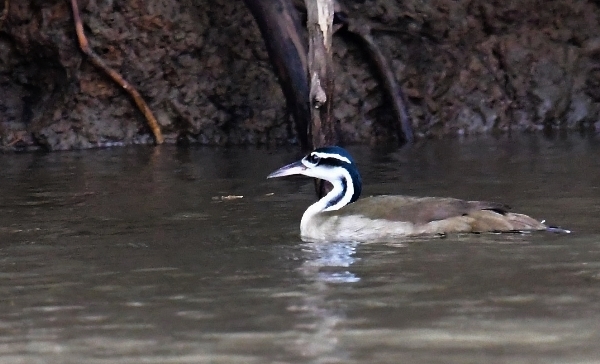 Sungrebe - a picture by Richard Pettett

As well as many herons, egrets, ibis, storks, spoonbills and cormorants we saw four species of Kingfisher, lots of waders and several species of passerines. We had good weather with excellent light and the photographers had a dream come true because many species were very approachable in the boat. 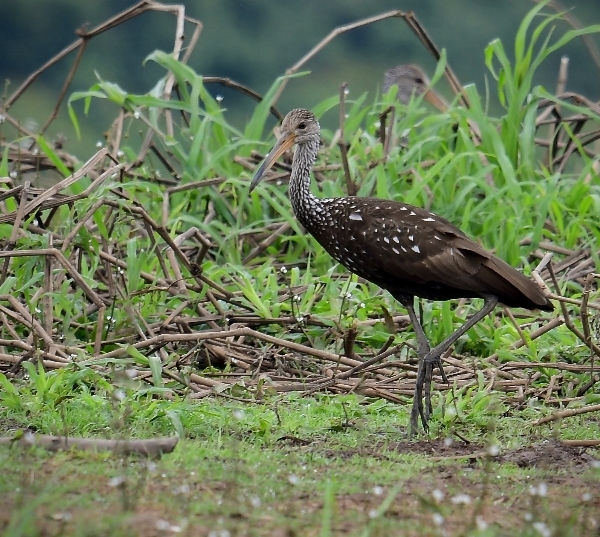 the Limpkin - taken by Richard Pettett

The American Pygmy Kingfisher was especially approachable and as we were watching it we found a Northern Beardless Pygmy-tyrant and a Ringed Kingfisher perched close by on some wires. The colourful Anhinga was a  great favourite of the group as  well as the many Spectacled Caiman. 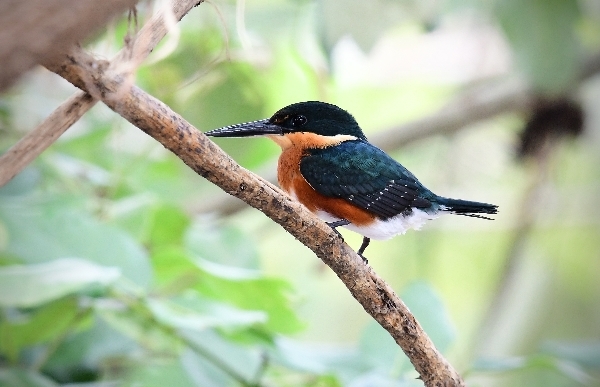 We saw the most species where the ground opened out and large pools of water could be scanned. The Roseate Spoonbill was a real crowd pleaser, such a beautiful and elegant species. Also the Limpkin went down well we had good views of several of those with Tricolored Heron, Wood Storks, Little and Great Blue Herons. A Glossy Ibis was an excellent sighting, they are not common in central America. 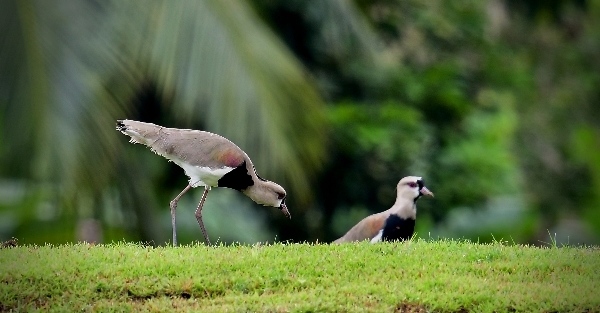 numbers were few but the species count was fairly good, a few small flocks of Black-necked Stilts were joined by Lesser and Greater Yellowlegs, Willet, Spotted Sandpiper and Southern Lapwing. We also had close views of Mangrove Swallow, Northern Jacana and we saw our first Nicaraguan Grackle.

Birds of prey were remarkable only in their absence, a few Ospreys were seen fishing and the usual Turkey & Black Vultures but nothing else except a roosting Pacific Screech Owl that was pointed out us. We saw a flock of Blue-winged Teal but they were the only waterfgowl we saw and a pair of Russet-naped Wood-rails was an excellent find by John.

Well, 3 hours flew by and before we knew it we were back on terra firma walking into the pretty village to take a late lunch at 2pm.

at lunch in Cano Negra

For the rest of the afternoon we headed back to Arenal but not before we made a detour towards the border with Nicaragua to visit a large marshland. Along the bumpy track back to the main road we stopped to look at several perched birds and to scan any marshes for the elusive Jabiru. We found a couple of Roadside Hawks sitting……..by the roadside, where else? Also, we stopped to look at a male Nicaraguan Seed-Finch and a huge collection of egrets, storks, spoonbills and ibis which also held half a dozen Muscovy Ducks. 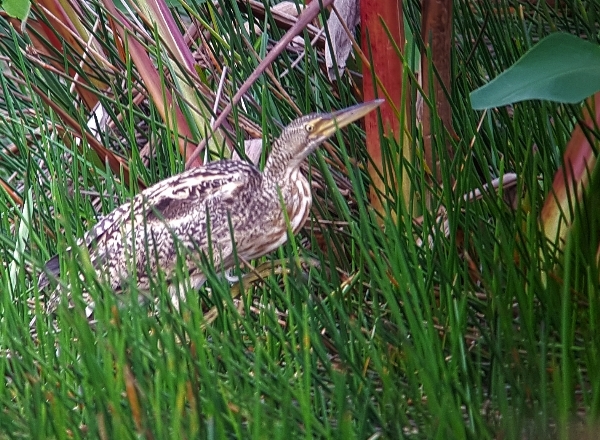 We made it the marshes within half-an-hour, what great place for birding. A raised, central track dissected the marsh gamic views giving us wonderful panoramic views of the reedbeds and open pools. It was a very popular place as many local families were out enjoying a Sunday afternoon, fishing and taking picnics. 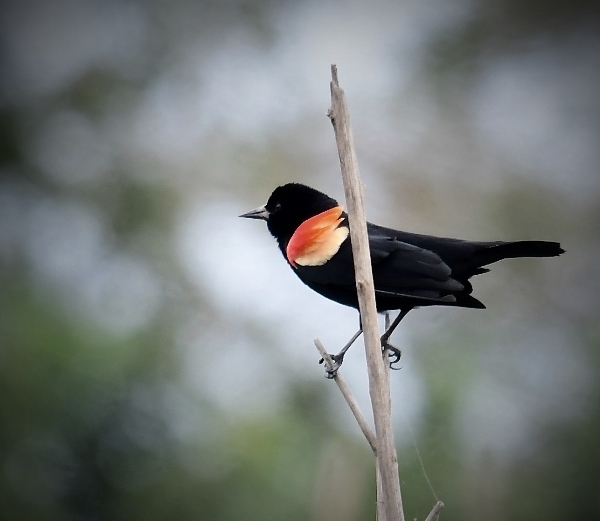 New birds came in thick and fast, I never expected to see Pinnated Bittern out in the open like that but, several of them showed really well. Red-winged Blackbirds were a joy to watch flitting about in the reeds. We saw a single Solitary Sandpiper, well, did you expect us to find a flock of them with a name like that?

After a short walk where we constantly stopped to scan the marshes we came across the magnificent JABIRU, hooray, our most wanted bird of the day. This Majestic giant of the marsh stood like a sentinel right at the back of the marsh, as though watching over the entire bird population. 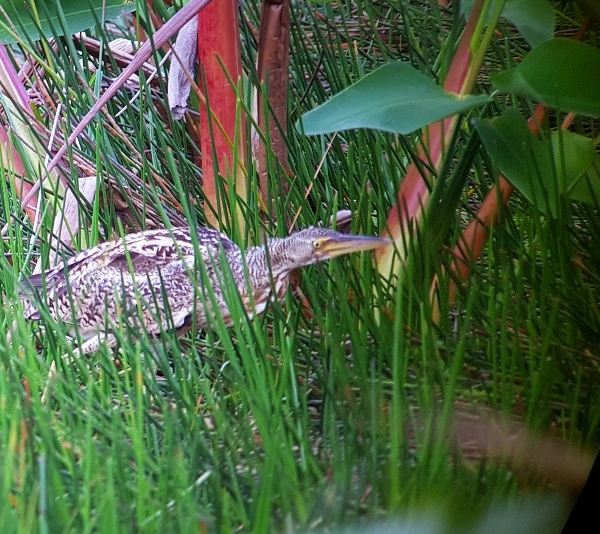 another record shot of the Pinnated Bittern

A flock of Black-bellied Whistling duck were joined by a few Blue-winged Teal and we found a few Purple Gallinules in the reeds a5nd that completed our sightings for the day. It was now getting on for 5pm so we had to leave this magical place.

We arrived back at the hotel at 7:15pm having stopped near the gatehouse to look at a Black-and-white Owl, dinner was taken an hour later followed by the bird-log, the list count is now approaching 300 species, the bad news is that ASTON VILLA lost in the EFL Cup Final!