We made the most of both the cool early morning light and the late afternoon drop in temperature, but in the middle of day we rested in the shade of our chalets or used the swimming pool.

At 5:45 we set off for our first walk of the morning, it was just lovely, about 20C with a breeze and the trees were full of birds, the ultimate T-shirt and Shorts birding that I love. Over a couple of hour we recorded about 40 species and about 25% of them  were new for the list. 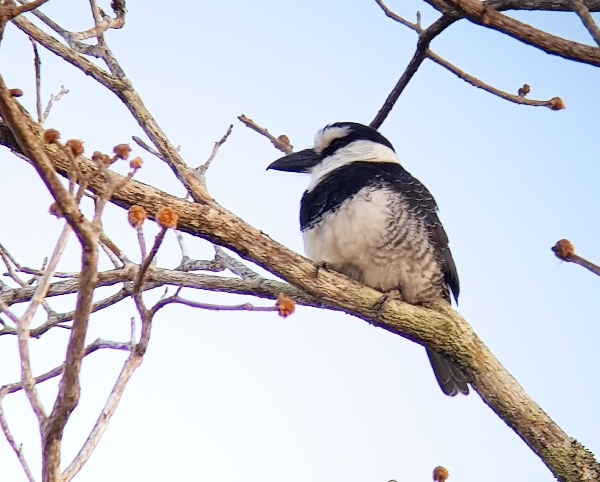 The White-collared Puffbird sat out nice for us as did the Torquoise-browed Momot and Hoffman’s Woodpeckers seemed everywhere, much to the delight of Mervyn. We watched the antics of a Black-headed Trogon, what a beautiful blue eye ring it has, we saw Stripe-headed Sparrow and we found a Double-striped Thick-knee. 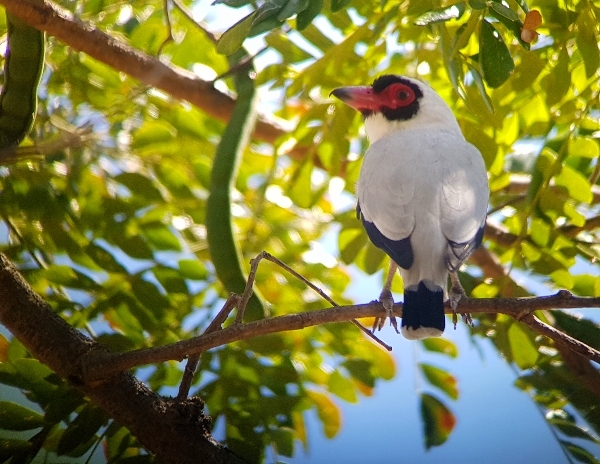 There were four species of hummingbird seen, Canivet’s, Cinnamon, Green-breasted Mango and Ruby-throated, none of them stayed around long and most of sightings we of them in the canopy. The Orioles looked particularly grand in the morning light, we saw Spot-breasted, Streak-backed and Baltimore Orioles. Johan was quick to point out the different flycatchers on show, the Streaked Flycatcher standing out in my memory but the tufted head gear of the Yellowish Eleania and the larger Brown-capped Flycatcher were also on show. The much smaller Northern beardless Tyrannulet also tried to grab our attention a couple of times. 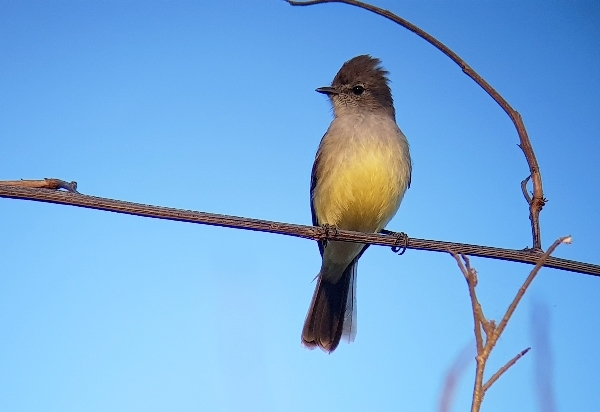 After a lovely breakfast we walked to the car park and before getting onto the bus Johan our guide showed us a Pacific Screech Owl which was roosting in a nearby tree. We then set off in the bus and headed back to the salt pans, this time we had a more relaxing time with plenty of time to point out all the species of waders, in particular the difference between Western, Semi-palmated and least Sandpipers. None of the birds on the ‘pans’ were new to our list but with many of them were seen much better than before. We also saw Brown Pelican, Osprey, Common Black Hawk, White Ibis, Yellow-crowned Night Heron and Wood Storks. 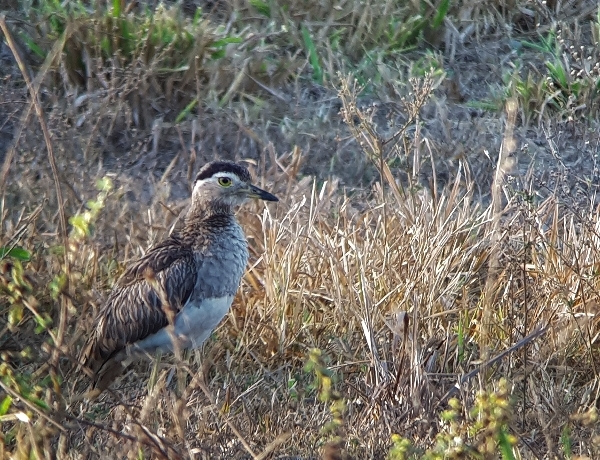 Once on the trails in the dry forest habitat we searched the trees for more species and at times there were several birds in one tree and it difficult to pick them all out, so concentrating on a single bird reaped rewards. We saw Yellow Warbler, White-lored Gnatcatcher, Long-billed Gnatwren, Northern Scrub Warbler, Scrub Euphonia, Tennessee Warbler, Chestnut Sided Warbler and one or two of the group got on to an American Redstart.

We searched for the mythical Lesser Ground Cuckoo without success, but we did find Ferruginous Pygmy Owl and our first Yellowish Eleania with Northern-beardless Tyrannulet, Olive-green Flycatcher and our first Orange-fronted Parakeet. Before we went to lunch we spent a little walking down to the shoreline of Nicoya Bay. At the base of the huge gardens there is an old jetty and during high tide periods there is normally a huge gathering of gulls and terns roosting on the wooden railings along the jetty. 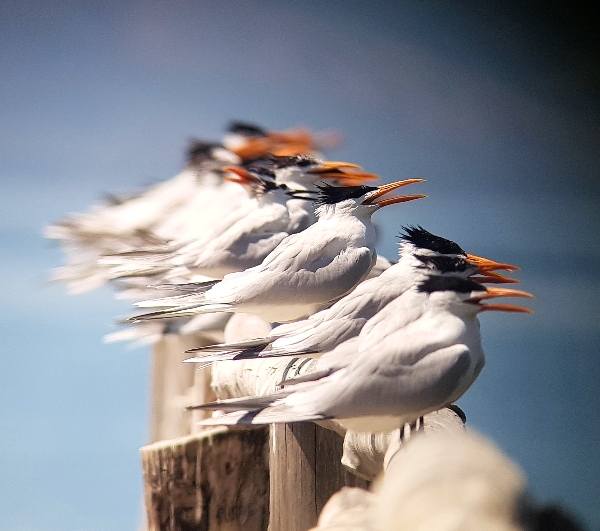 Royal Terns on the wooden jetty

Today it was packed solid with Royal Terns, a couple of Sandwich Terns had slotted in with them but there was no space for gulls, they had to stand on the jetty floor. We saw a good number of Laughing Gulls and a single Franklin’s Gull with many Brown Pelicans and Magnificent Frigatebirds flying over. Just along the beach a rocky outcrop held a bunch of waders and to our great delight several Surfbirds were present with Black-bellied Plover, Semi-palmated Plover and a few Least Sandpipers. 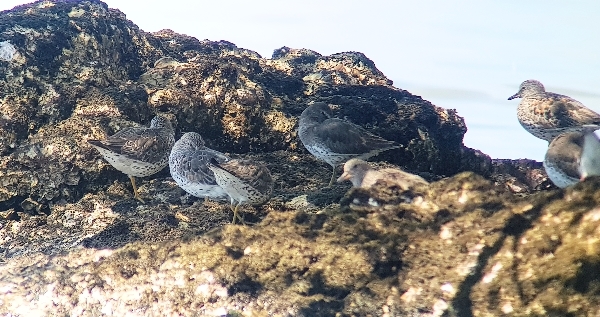 Lunch was served dead on 12 noon, after that we had a long siesta during the hottest part of the day, most of the group went swimming in the pool at Ensenada and we all had a quick nap I think. During the break several birds were found in the grounds including Masked tityra, Black-headed Trogan, various orioles and a troupe of Howler Monkeys.

Only half of the group turned out for the afternoon walk! So six of us and our guide Johan set off on foot to find the elusive Cuckoo, we walked down the main approach track before turning off to a Mirador. Along the track we found Orange-fronted Parrots, Nutting’s Flycatcher, Common Ground Dove and many birds seen already this morning. 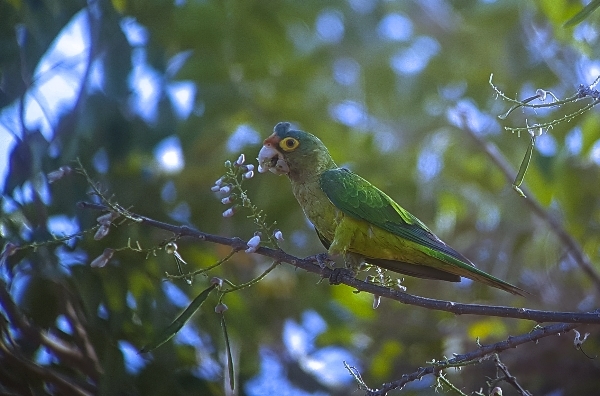 We stopped several times during the climb up to the Mirador finding other flycatchers including a Scissor-tailed Flycatcher and a new hummer, the Blue-tailed Hummingbird. At the top the views were spectacular we could see the salt pans, the laguna, vast areas of farmland and a huge stretch of Nicoya Bay. ‘Scoping the bay we could thousands of waders, herons, egrets, ibis, pelicans, frigatebirds and even an Osprey standing in the water.

We spent the next 30 minutes listening and looking for  the Lesser Ground Cuckoo without success so we picked up our scopes and began our walk back, just as we were leaving the Cuckoo called!!! We walked back to the Mirador and sure enough there he was sitting near the ground calling what a great bird for the list and what a beauty too! 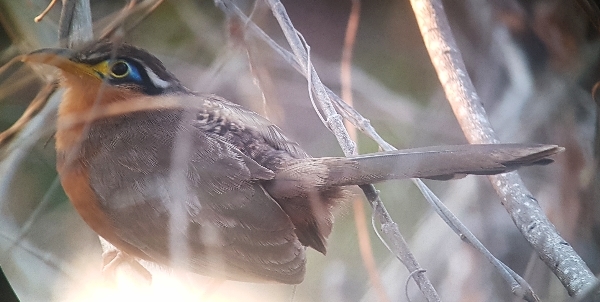 this is not a cropped shot - the bird was too close and I could not back off because there was a 100 meter drop behind me! Some said step back Bob!! 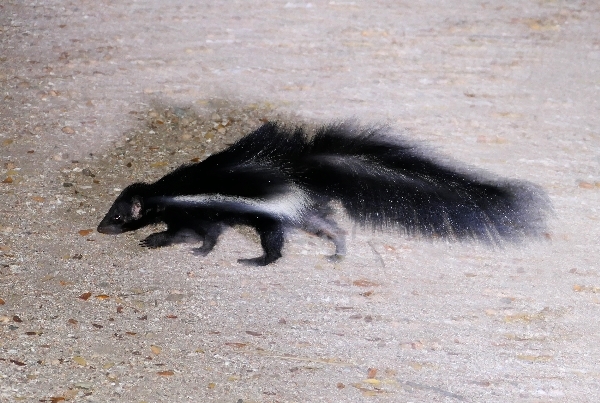 American Hooded Skunk - several of these were roaming around the grounds - hmmmm whats that smell? taken by Ray Marsh

The walk back down was so much quicker, we had a spring in our step and we were in a buoyant mood, the bus was waiting for us at the bottom of the hill, we drove back to lodge and a had a nice cold beer to celebrate our find.

Dinner was at 7pm we called the bird-log we now have 310 species on the list and are halfway through the trip.