Our pre-breakfast birding was a short walk in the gardens, down to the jetty and then along the main approach track. It was a beautiful morning, clear sky with a lovely temperature. We saw plenty of species but only two of them was new for the list and that was the Rose-breasted Becard, we saw both male and female they have completely different plumages, and the Plain-breasted Ground-Dove. 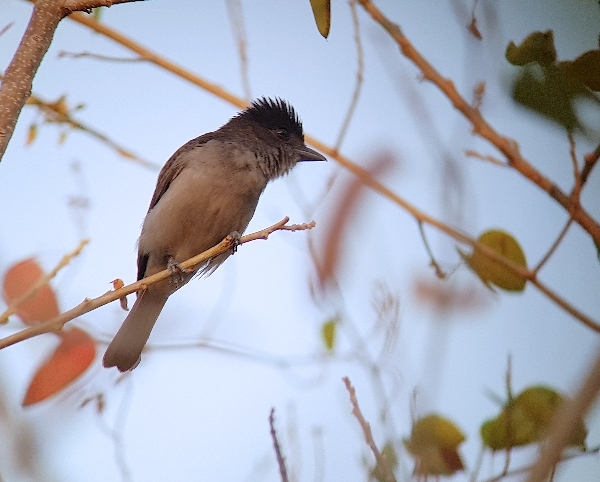 Further down the track a Ferruginous Pygmy Owl showed very well at the top of a tree and another pair of White-collared Puffbirds put in an appearance. The Turquoise-browed Motmot was also well appreciated and three species of Orioles added bright colour to the dead-looking leafless trees. A small troupe of Howler Monkeys were eating fruit on the ground at the side of the track and they didn’t take the slightest notice of us as we walked past them. 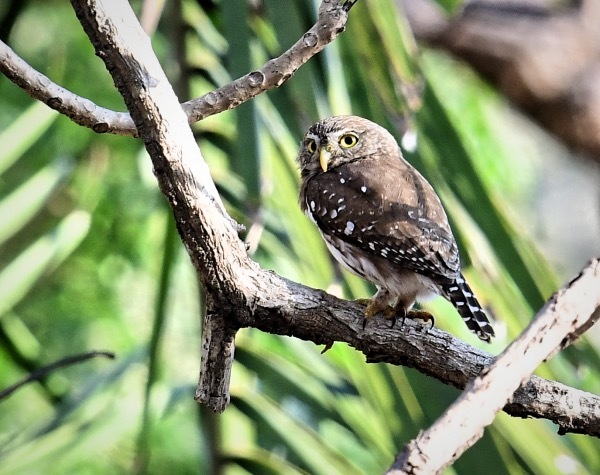 A nice breakfast had to be carefully guarded because it was likely to be stolen by White-throated Magpie-Jays, they are cheeky little blighters and the staff are forever shooing them off. With bags packed and loaded onto the bus we were off to our next destination, Tarcoles. The drive was about 100km longs but we planned to detour along the way for more birding sessions. 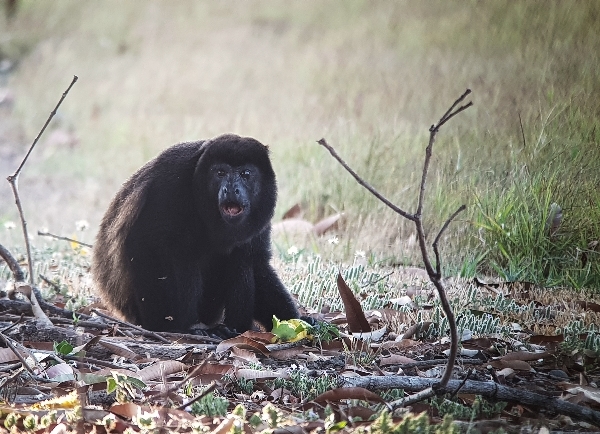 The track to the main road is about 15km long from Ensenada and we made frequent stops to watch roadside birds, the Scissor-tailed Flycatcher was a hit with the group we saw a handful of those, we also stopped for Crested Caracara and we made a stop to see a special bird of the dry forest.

the group birding the track at Ensenada this morning

We scoured an area of forest for the Long-tailed Manakin which eventually showed for all of us, what a little stunner, a male too! For our morning birding session, we stopped at Chomes Shrimp Farm. There we scanned a series of lakes and we had a walk along a beach.

Goodbye Ensenada - a last look at the jetty and Nicoya Bay

Many, many, birds were on the lakes, none of which were new species for us but we had much better views of a lot of waders that had been a bit distant last time we saw them. It was the birds out on a sand bar that proved to be of more interest. A large group of Royal Terns also held Caspian, Gull-billed and Sandwich Terns. Next to the terns was a single Herring Gull and several laughing Gulls. We found our first American Oystercatcher and also present were Black-bellied Plover, Willet, Whimbrel a few herons. 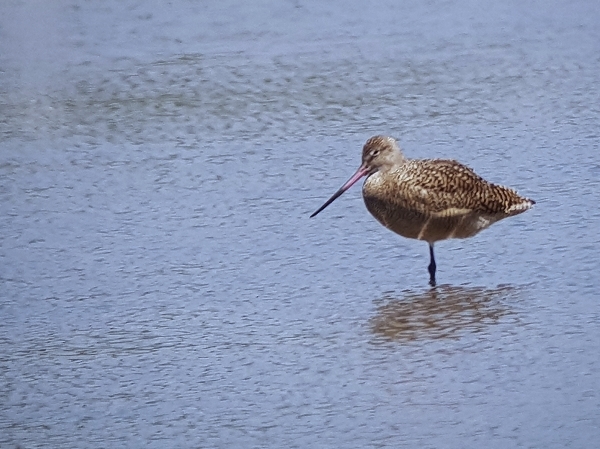 We left Chomes without seeing a single Black Skimmer which was unusual and our first dip of this species at this site (the tide was high which makes a difference). After taking lunch at a roadside restaurant we continued south and arrived at the famous Tarcoles River Bridge. Very large American Crocodiles can be seen from the bridge so we walked across, there were several crocodiles, one or two were 4 meters long. 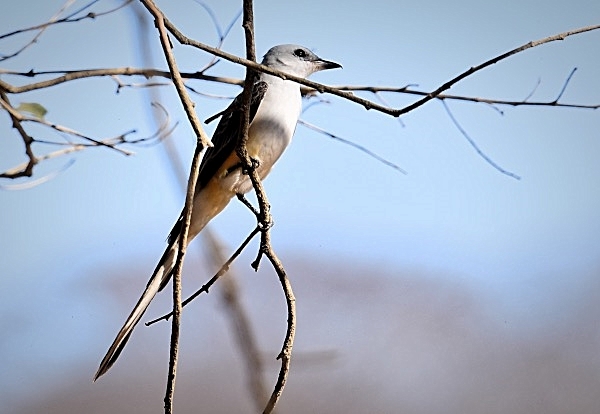 We arrived at our hotel around 2pm and as we stepped down from the bus two Scarlet Macaws flew over us calling noisily, what a nice welcome. After settling into our air-conditioned rooms we arranged to meet up again at 3:45pm. The hotel had wonderful gardens and included pools and a river running through it. A few species were found by some of the group, Bare-necked Tiger Heron, Northern Waterthrush, a few common species and one person photographed a Scaly-crowned Pygmy-Tyrant. 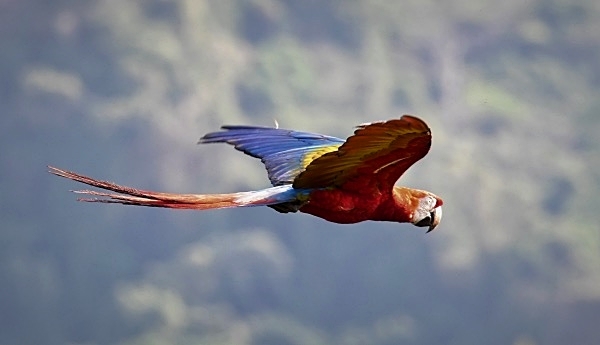 For the afternoon birding we drove up very high above the surrounding countryside we had fantastic views over the whole area looking north, we could see out to the coast and path of the Tarcoles River. Birding was good up there, it was excellent for raptors even this late in the day. Dozens of Turkey Vultures were up there, we had three or four sightings of King Vulture, we also saw Broad-winged and Zone-tailed Hawks.

In the trees along the lane we found four more Scarlet Macaws which allowed fairly close approach before flying off other species seen were species already listed until we walked into an area where we found a couple of new Wrens, we found Rufous and White Wren and Rufous-breasted Wren, a Cabanis’s Wren (formerly Plain Wren) also called but we never saw that one. 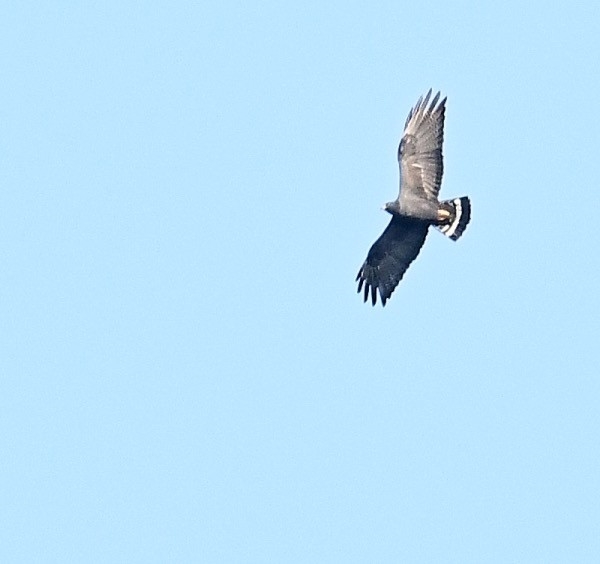 record shot of the Zone-tailed Hawk - by Richard Pettett

Our search for the endemic Fiery-billed Aracari went unrewarded but we enjoyed the walk, the scenery and a nice array of butterfly species. We arrived back at the hotel around 5:45pm and met again at 7pm for the bird-log. Dinner was a buffet, we sat down to dinner at 7:30pm. A very large Cane Toad made it into the reception area and we could hear Bull Frogs calling from the garden, just outside my room there were half a dozen White-lined Bats hanging around when I left for dinner.