We met at 6am for a pre-breakfast amble along the approach track to the lodge, we had a clear blue sky, no wind and a lovely temperature. The dawn-chorus was very different now with just one or two songs recognisable, Melodious Blackbird and Clay-coloured Thrush leading the way but the melodic song of the Rufous-naped Wren was by far the most prominent. 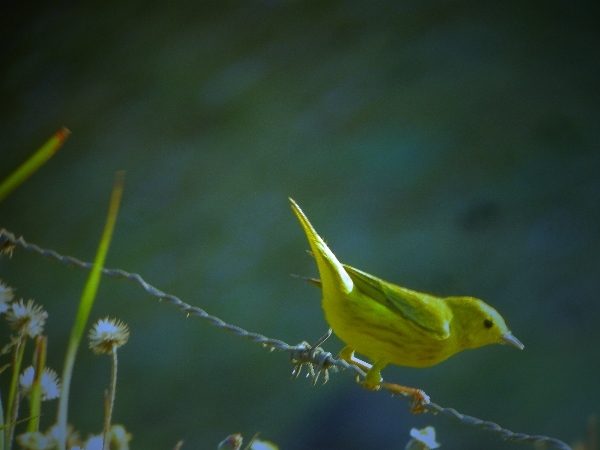 Over the next hour we added several new species to the trip list; Stripe-headed Sparrow, Rose-throated Becard, Black-headed Trogon and the star of the morning, Painted Bunting, a pair of these exquisite bundles of colour fed with the sparrows in a field nearby, located by Peter. A pair of Turquoise-browed Motmots and a beautiful Ferruginous Pygmy-Owl were other highlights. At Breakfast 4 Scarlet Macaws had everyone reaching for their binoculars aa a blaze of colour dropped down into the trees just outside the restaurant, looking absolutely amazing in the morning light.

Our excursion to Carara National began right after breakfast this huge forested area encompasses both dry and rain-forest supports a wide range of wildlife species. We began in the northerly rain-forest taking a very flat trail and almost immediately started seeing new species. 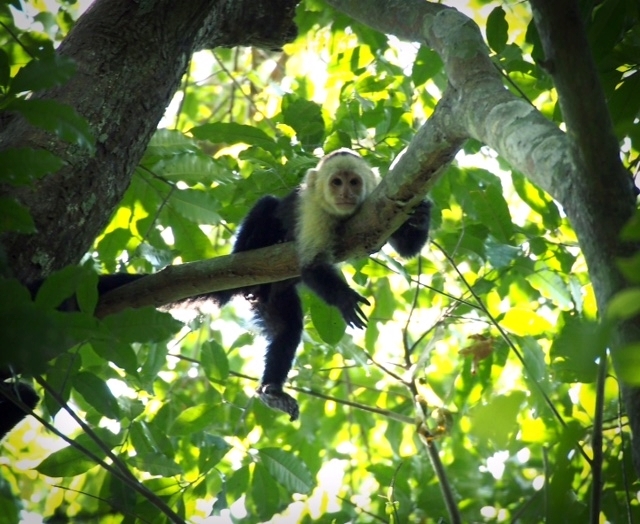 A pair of Black-hooded Antshrikes showed very well and a White-whiskered Puffbird, also found by Peter, sat perfectly still for us, how obliging! Long-billed Gnatwren also performed well and as the walk progressed more and more sightings were made. Butterflies were prolific throughout and we saw White-chinned Capuchin Monkeys, Mantled Howler Monkeys, Variegated Squirrels, Basilisk Lizards, Green Iguanas and a Brown Vine-Snake.

We bumped into a mixed feeding flock of birds, a small one but it contained several different species, Black and White Warbler, Lesser Greenlet, White-winged Tanager, Plain Xenops, Chestnut-sided Warbler and Yellow Warbler. A Tawny Woodcreeper was a nice find and added to Cocoa and Streak-headed Woodcreepers already seen today. We made an attempt to see Royal Flycatcher in its regular breeding place and although we could hear it we never saw it, likewise with the Orange-collared Manakin.

We had glimpses of open sky as we passed through glades where trees had fallen, Scarlet Macaws drifted over announcing their passage with very loud raucous calls we also saw our second King Vulture high in the sky. 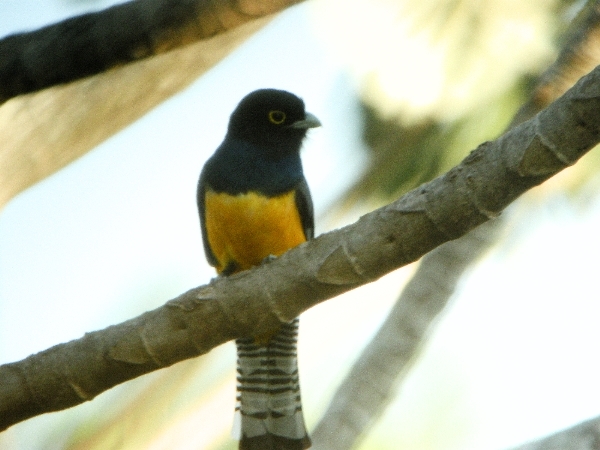 For lunch we ate at the ‘tourist’ restaurant right next to the bridge over the Tarcoles and after we had eaten we walked onto the bridge from where you see a dozen or so huge American Crocodiles loafed in the water or on the muddy river-bank. A few new species were seen from our vantage point;  Black-necked Stilt, White Ibis, Osprey, Short-tailed Hawk and lots of herons, egrets and grackles.

Afterwards we re-entered the park from a different entrance, we planned to stay until at least 4pm so that we could see a ‘Manakin-spectacle’. Despite the time of day good sightings kept on coming: Chestnut-backed Antbird, Rufous-capped Warbler, Ruddy Quail-Dove, Worm-eating Warbler. A small number of Agouti were seen, these shy rodents are the size of a small pig and soon scarper when they see humans. Roy showed us another species of White Bat, it was the Northern Ghost Bat roosting aline under fronds of palm.

At 3:30pm we arrived at the ‘Manakin pool’ and waited in silence, breathless with anticipation. Very soon Red-capped Manakins started to appear, first the odd male then couples, no more than three arrived at any one time but there was plenty of activity. A pair of Agoutis splashed about further upstream, a Ruddy Quail-Dove strolled across the shallows and a Black-tailed Flycatcher also came to bathe.

We left at 4:30pm, our bus was waiting at the end of the trail waiting to take us back to the lodge for an early finish. Dinner was taken early because at 7:30pm we went out for an evening stroll along the main approach track. We found an Orange-kneed Tarantula tucked away in a hole and after searching for a good while we found a Black and White Owl, our 10th owl species of the tour and great species to end the day with.