Without doubt the superb boat-trip excursion along the Rio Tarcoles was the highlight of the tour and we had perfect weather for it. We saw an amazing array of species today and its hard to believe that we added over 30 species to the list, taking our total over the 400 mark!

Our morning pre-breakfast walk around the lodge grounds failed to produce any new species but the male Painted Bunting was seen again, Scarlet Macaws flew over several times and many locally common species were enjoyable to watch.

The boat trip started really well and on time, as we boarded our boat a Striped Cuckoo was located by our boat-captain and guide. We headed for the mangrove forest first but noted a dozen species along the way! Roseate Spoonbills looked dazzling in the morning light, Tricoloured, Yellow-crowned, Black-crowned, Little & Great Blue Herons all fed or loafed on the muddy banks of the river. A number of Ospreys drifted over and a Peregrine was found high in a tree. The ever present 'gangs' of Magnificent Frigatebitds drifted over the area. 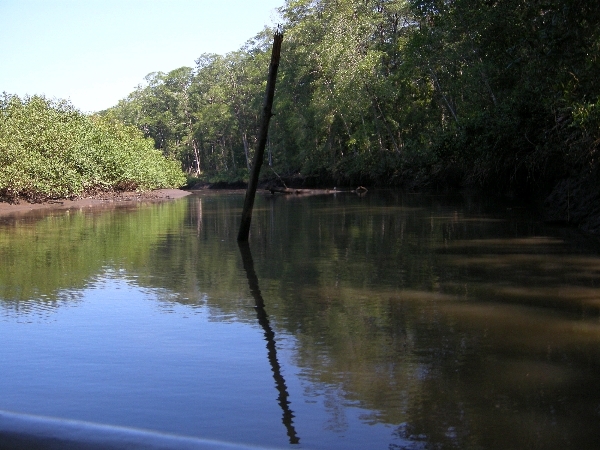 In the mangroves we were treated to excellent views of Boat-billed Herons and a tiny flash of green and orange resulted in the sighting of an American Pygmy Kingfisher.  We went on to add Common Black Hawk, Mangrove Vireo, Panama Warbler (a race of Yellow Warbler), but a Mangrove Hummingbird failed to show. A great view of a Northern Raccoon was our only mammal sighting but plenty of American Crocodiles, Green Iguanas and Green Basilisks were on show.

The second half of the trip was upriver where huge Crocs, looking like floating logs or flotsam on the shore were perfectly passive but still menacing without moving a muscle! We saw even more shorebirds but no new species were added. Our total for the trip was just under fifty species, it had been everything we expected and more, but, alas it had to end.

At 11am we set off northward for the final leg of the journey, which was the dry forest of Guanacaste.  A quick stop at Caldera was made to scan a huge flock of roosting gulls and terns. A high percentage of the birds were either Laughing Gulls or Royal Terns. We also saw Brown Pelican, Sandwich Terns and not much else. Just around the next bend we turned off on a side road which led us to Caldera Mangroves, there our guide Roy called out a Rufous-necked Wood-Rail, it showed briefly but well enough to identify it, but it was hard to get it into your binoculars.

Before arriving at Ensenada we ventured off the main road once more, this time we took a 15km dirt track to Chomes where a large shrimp farm is excellent for shorebirds especially during high tide. Along the track we stopped to admire Scissor-tailed Flycatchers on the fencelines. 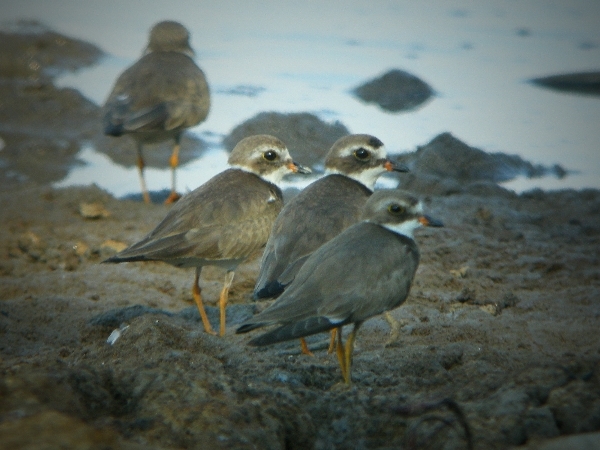 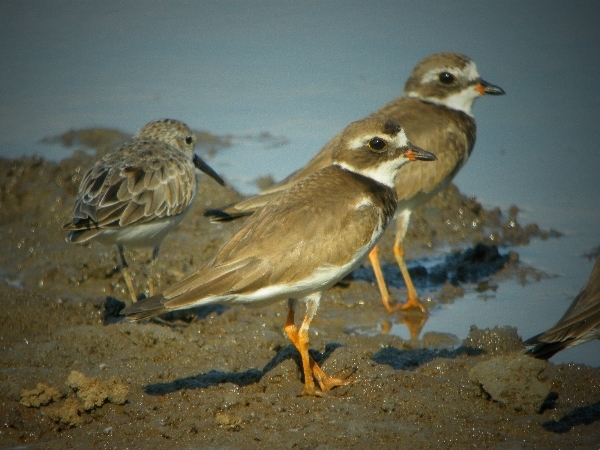 you can see the semipalmation (partial webbing) on the birds foot 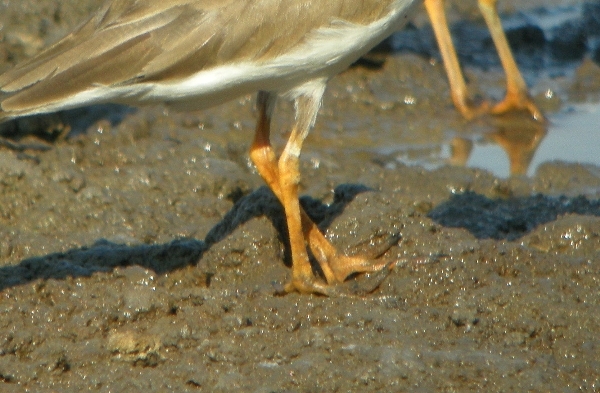 It was marvellous at the shrimp pools, we listed 16 species of waders, lots of herons, egrets and some Blue-winged Teal. We had an intense time trying to sort out all the look-alike peeps. Western, Least and Semipalmated Sandpipers fed alongside one another as did Wilson’s and Semipalmated Plovers. 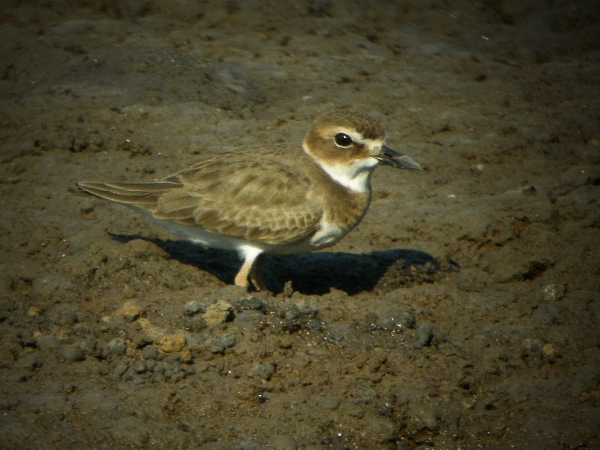 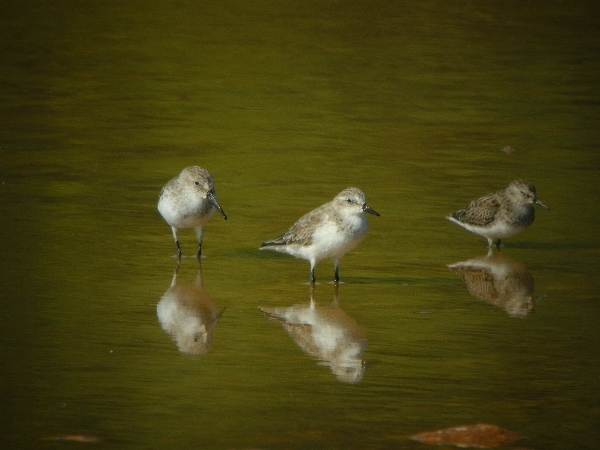 The three peeps - Least, Western and Semipalmated Sandpipers - can you see which is which?

A short walk led us to the beach where we watched squadrons of Brown Pelicans diving for fish, Ruddy Turnstones on the rocks and finally oir main target species flew by, the Black Skimmer.

It was past 4pm so we had to set off, one scheduled stop and two impromptu stops slowed us down somewhat. First we stopped to look at Double-striped Thick-knee, found by eagle-eyed Mike, then a second stop to admire the most beautiful male Blue Grosbeak, what a stunner. 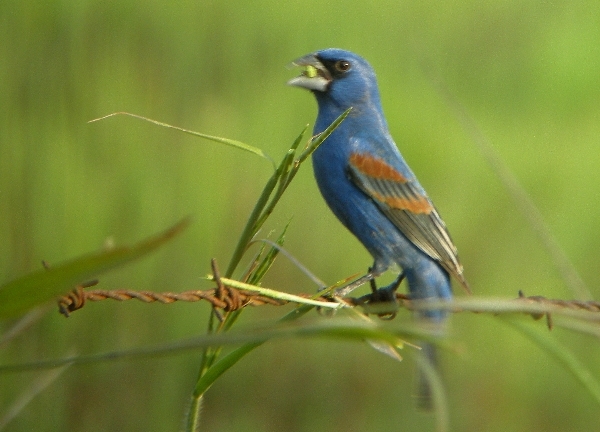 this photo does not do this Blue Grosbeak any favours, it is a stunning bird

Our third stop produced, unintentionally, a superb raptor. We were looking for Long-tailed Manakin but it did not show however Roy did locate by call a Collared Forest-Hawk. In fact, two hawks turned up after Roy called them in, a Grey Hawk also appeared and tried to chase off the Forest Hawk without success. The larger Forest Hawk sat high up on a dead tree and constantly called, reaffirming its territorial claim.

Our very last sighting of the journey was of Common Pauraque, one or two flew up off the track, seen in the bus headlights towards the end of the trip. We arrived around 6:30pm in the dark and after a quick check-in we sat down to dinner an hour later.