ALL DAY AT ARENAL OBSERVATORY LODGE AND TRAILS

What a fantastic day we had today! We had a bird-fest, Arenal Observatory is a wonderful place, we logged 103 species, amazing!  As we arrived last night in the dark we had no idea of our surroundings so we had a lovely surprise as we got up at first light. Our rooms overlooked lush gardens, forest and the awesome conical-shaped Arenal Volcano sat looming over us. 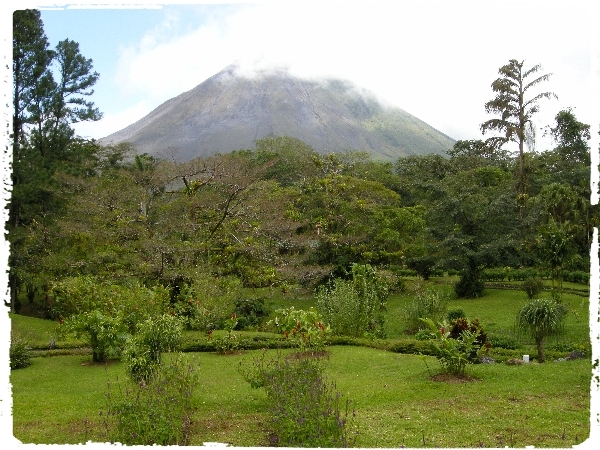 The view of the Volcano Arenal from our cabin

We logged several new species in the gardens and during our walk to the viewing area around the main restaurant, Black-crested Coquette, Wood Thrush, Violet-headed Hummingbird, Bronze-tailed Plumeleteer and we also saw a dozen species already listed. 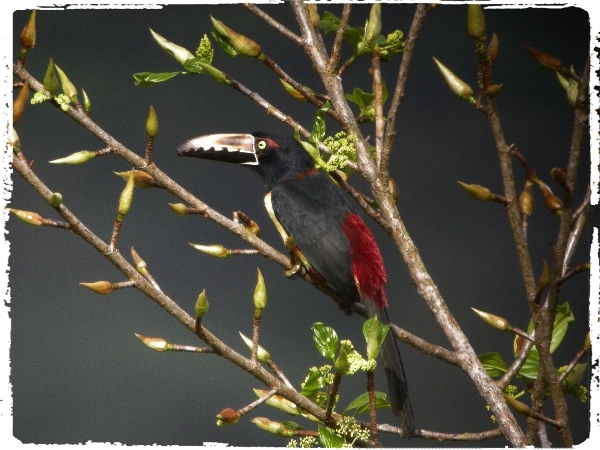 From the viewing veranda at the main reception area things went ‘bonkers’ as a dozen more new species appeared in quick succession, it was fantastic but most of the group struggled to get to grips with all the new names, shapes, colours and calls. Crested Guans called from the trees as Great Curassows came to the feeding tables with dozens of Montezuma Oropendolas. 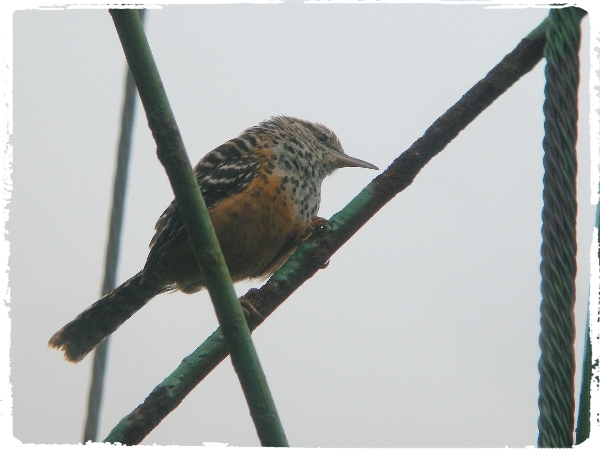 Stunning tanagers competed with the outlandish Red-legged and Green Honeycreepers for our attention, the brilliant, vibrant colours of the Emerald Tanager outshone the Bay-headed, Golden-hooded and Passerini’s Tanagers. 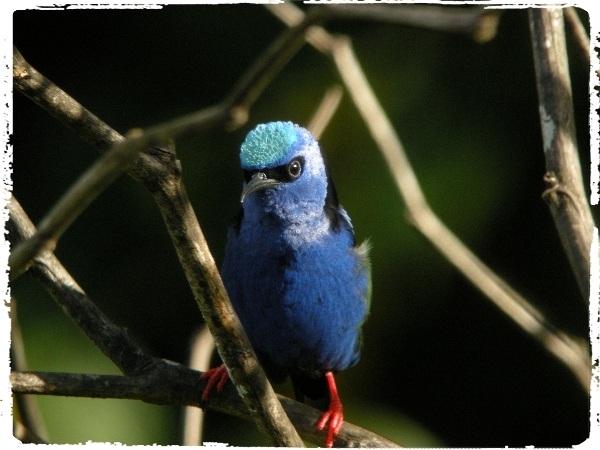 Both the Yellow-throated Toucan (formerly known as the Black-mandibled Toucan) and Keel-billed Toucans fed in the nearby trees as did the Collared Aracari, Brown Jay and several other species. 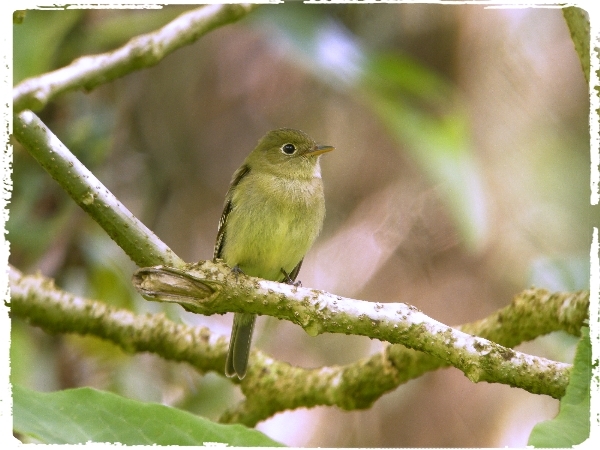 We dragged ourselves away and went for a short walk to the car park and gardens. Birds came thick and fast and in all shapes and sizes. A Band-backed Wren was nice as well as Yellow-bellied Elaenia, Carmiol’s Tanager, White-throated Thrush, Buff-rumped Warbler, White-fronted and Red-lored Parrots and several other species. 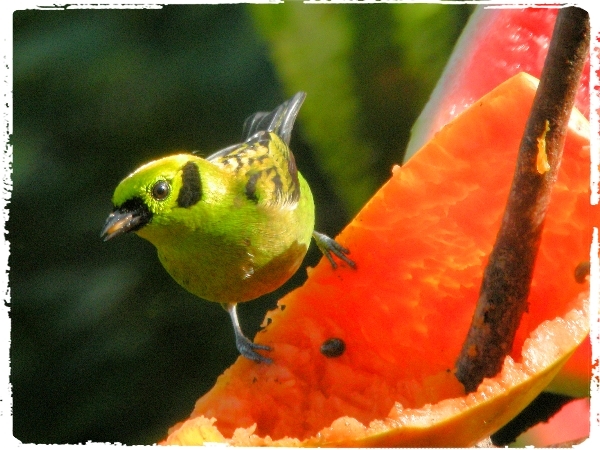 After breakfast we set off on another walk to a pretty waterfall site but we didn’t get very far from the car park. A Rufous-tailed Jacamar slowed us down somewhat followed by a White-collared Manakin and Yellow-bellied Flycatcher. Further along the lane we hit a purple patch when we found another 8 species in quick succession, most of them were new for us. Dusky Antbird, Bicoloured Antbird, Spotted Antbird and Scale-crested Pygmy-Tyrant started us off followed by Streak-crowned Antvireo, Stripe-breasted Wren and another sighting of Rufous-tailed Jacamar. 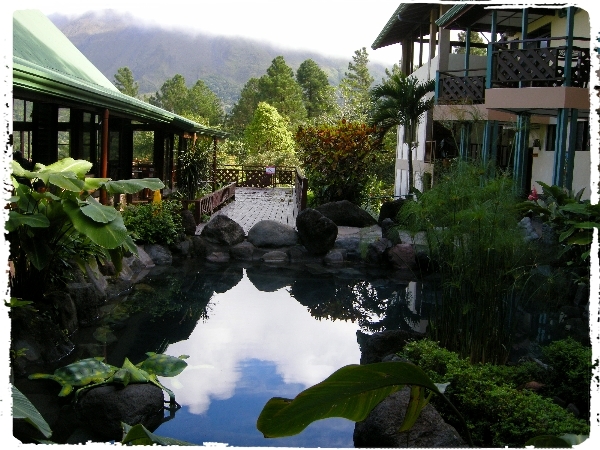 Restaurant and reception area at the lodge

We staked a section of the forest looking down from the road to try to see a Thicket Antpitta, the bird called constantly but only Roy our guide managed to see it. On the forest track leading down to the waterfall we bumped into another plethora of birds. A Song Wren was a superb find as was Spotted Barbtail, Broad-billed Motmot, Orange-bellied Trogon, Yellow-faced  and both Wedge-billed and Spotted Woodcreepers. 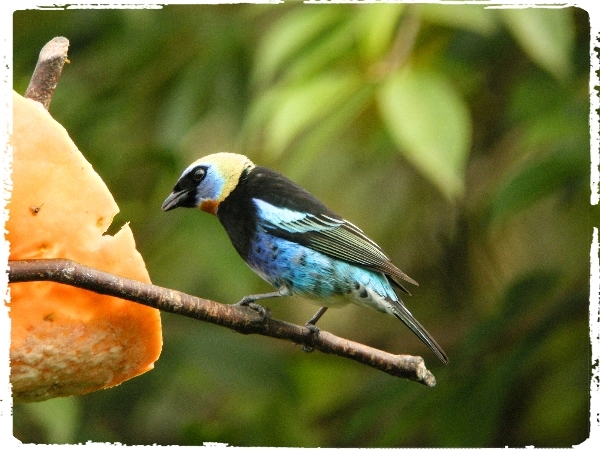 We saw a few raptors through the tree-canopy including an Ornate Hawk-Eagle, wow, what a great find! As for other wildlife, Eva found a Tamandua (Collared Anteater) on the way back from the falls, it was high up in the trees but we had great views, the group loved that find. Roy picked up a small Green Vine Snake and earlier we had seen an Eyelash Palm Pit-Viper. Many butterflies were on the wing and we also saw Varigated Squirrel, Mantle Howler and Spider Monkey. 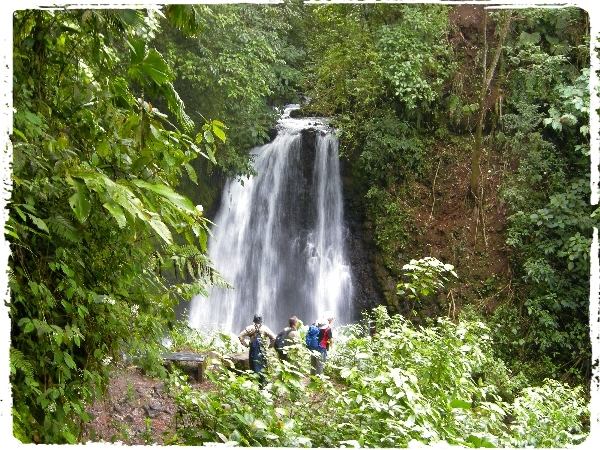 After a  short break we jumped onto the bus and drove to the ‘Peninsular’ track where we spent the rest of the afternoon walking. It was slow to begin with very little seen but eventually we started listing new birds. Red-throated Ant-Tanager, Long-billed Hermit, Pale-billed Woodpecker, Olive-sided Flycatcher, Mourning Warbler and a Little Hermit was found sitting on her nest by Damian our driver! 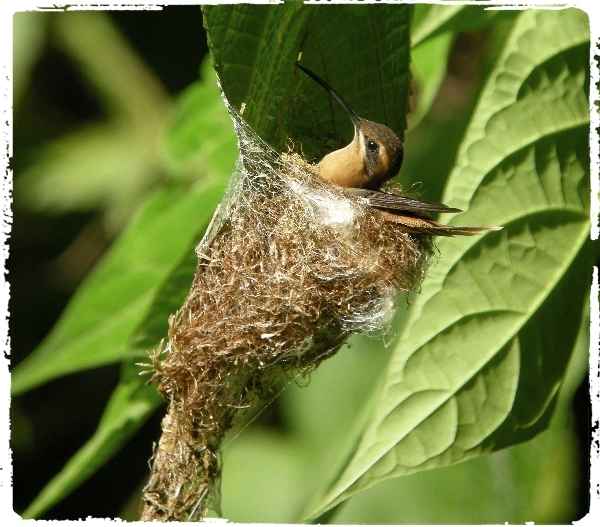 Towards the end of the track we got close to the huge Arenal Lake and its dam, there we collected a few more ticks, Great Potoo, Mangrove Swallow, Amazon Kingfisher, Thick-billed Seed-Finch and we concluded our day’s birding at that point – or we thought we had! 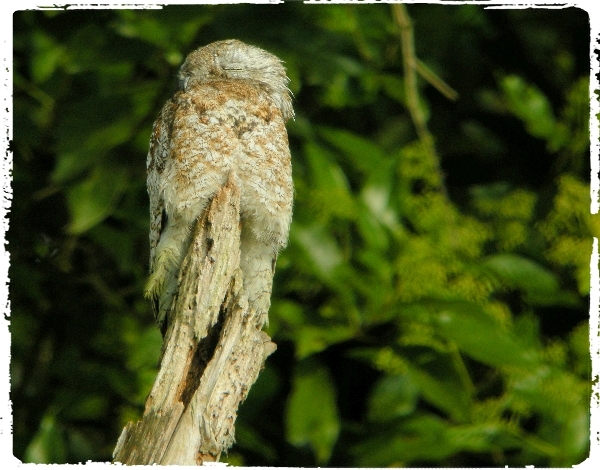 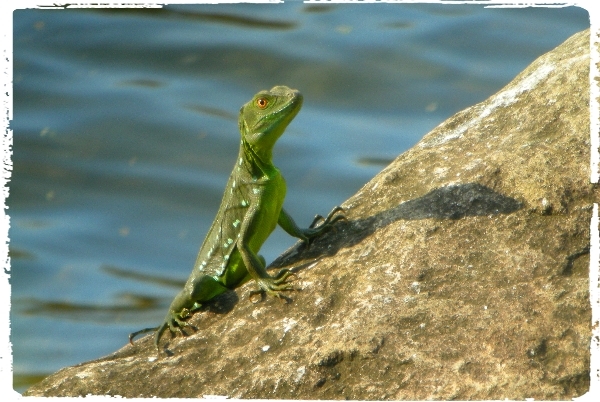 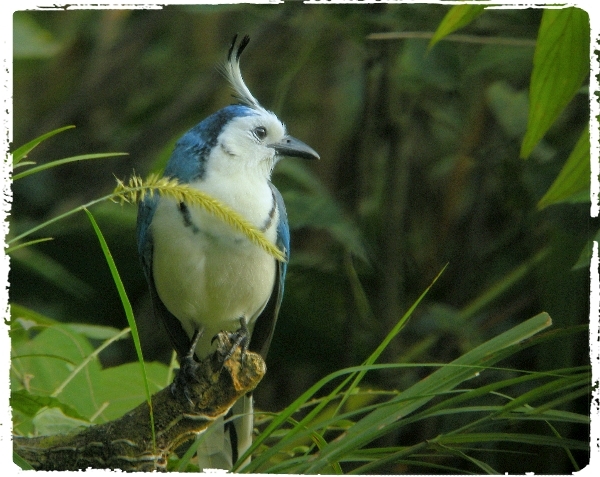 On the way back to the lodge we stopped several times to look at perched birds, first we stopped to watch a Broad-wing Hawk that sat on a post, then a flock of White-throated Magpie-Jays thrilled the group. A little further along the track we stopped to look at an owl-roost, Roy pointed out 3 Pacific Screech-Owls, this was a great conclusion to the day. 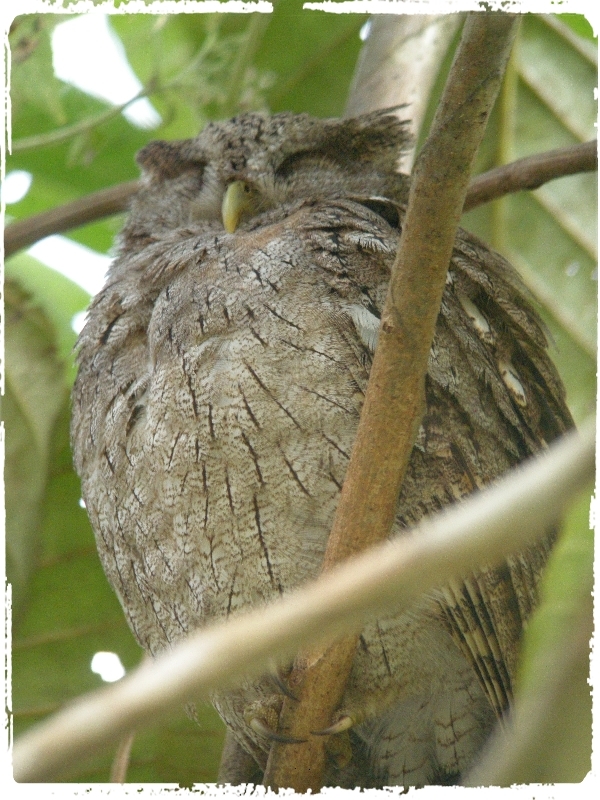