Our 6am morning walk along the River Sarapiqui within the grounds of Selva Verde produced very little and the bird tables were out of food!  We did see Bare-throated Tiger-Heron, Little Blue Heron, Snowy Egret, Neotropical Cormorant, Amazon Kingfisher, Black Phoebe, Spotted Sandpiper and Buff-rumped Warbler along the river and in the trees we listed Ochre-bellied Flycatcher, Black-cheeked Woodpecker, Collared Aracari and at the bird tables we eventually saw Orange-billed Sparrow, Red-throated Ant-Tanager, Summer & Palm Tanagers and a House Wren. 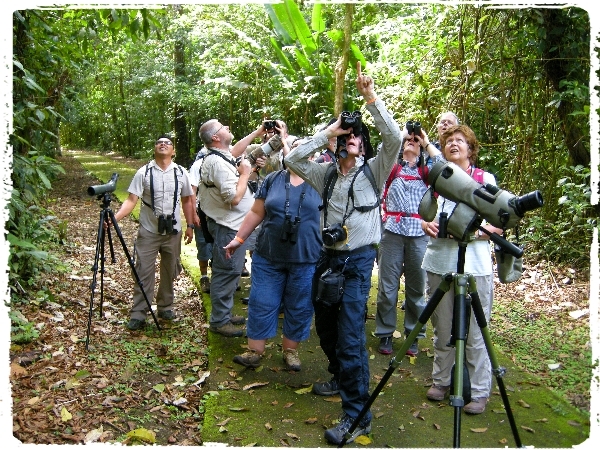 on the trail at La Selva

For the rest of the day we visited La Selva Biological Research Centre, as we drove there we made an unscheduled stop to watch a Green Ibis found by Mike, it gave great views but being a young bird it wasn’t very green. 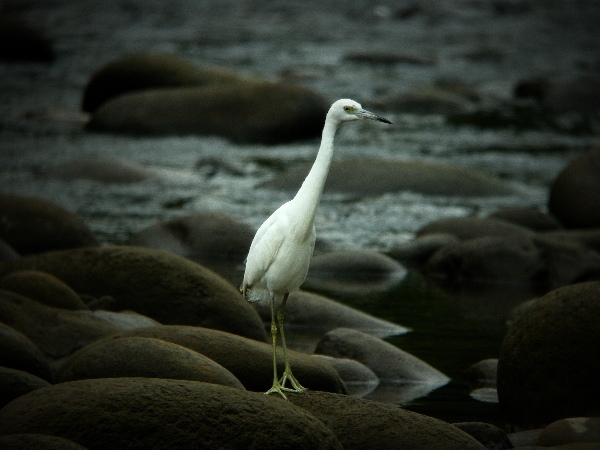 You always have a tremendous and exciting day out at La Selva the rain forest habitat is superb and well protected with a very high biodiversity. The day consisted of a morning guided walk, a 90-minute lunch break and a second guided walk during the afternoon. The many trails through this low to mid-level rain-forest gives you the opportunity to see a lot of wildlife. 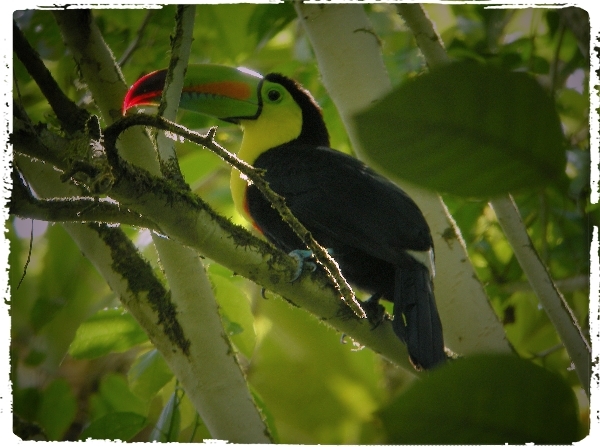 Around the main reception area we never saw much but after meeting our guide we set off for our morning walk and things started to get interesting. It was the usual experience for a new venue, bird sightings came thick and fast with new names and different shapes and sizes to try to remember. A Dusky Antbird sighting was quickly followed by Rufous Mourner, the former at ground level and the latter up high. A Lesser Greenlet was found in the canopy and a White-ruffed Manakin appeared at eye-level.

After a couple of hundred meters we had logged around 20 species, most of them were new for us, Plain Woodcreeper, both Fasciated & Black-crowned Antshrikes, Long-billed Gnatwren, Great-crested Flycatcher and another prized sighting, the Snowy Cotinga found by Craig. 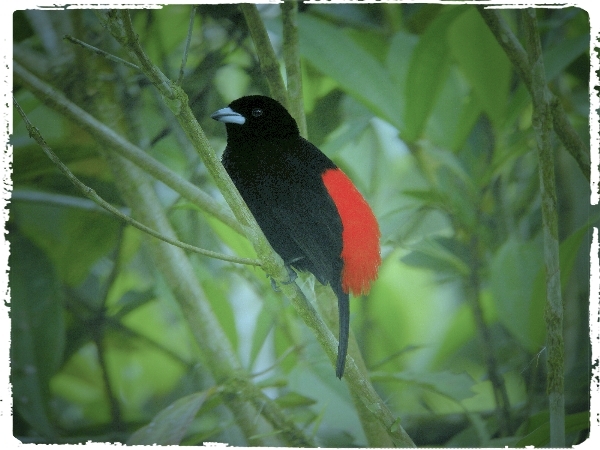 High above us we noted several species in the sky when gaps appeared in the canopy, our second White Hawk drew lots of attention followed a little later by King Vulture, whilst Grey-rumped Swifts dashed about over the tree toos all morning.

We were shown a Two-toed Sloth, several Iguanas and back to birds, we saw a Great Tinamou and we searched for a Vermiculated Screech-Owl without success. Towards the end of the walk we added Long-tailed Tyrant, Pied Puffbird and White-Breasted Wood-Wren. It was now very hot and humid and our lunch-break was a most welcomed and refreshing break. 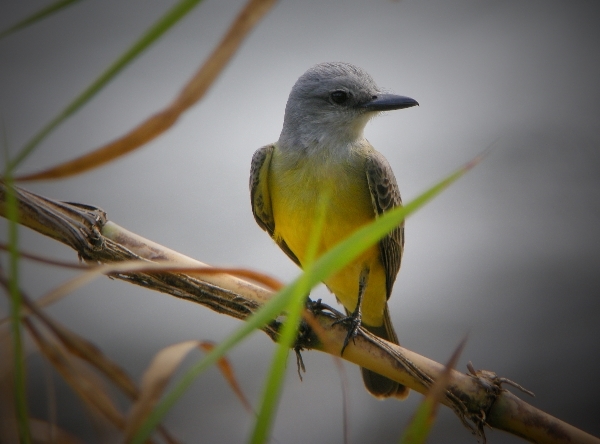 For the afternoon we took a different trail, higher up in the reserve where more mature trees grew and more new species awaited our attention. Some really good must-see species went onto to our list the first of which was a Bare-necked Unbrellabird, it took some finding but it showed really well in the end. Next we tracked down two noisy Great Green Macaws, they were feeding in the canopy and got the group really excited.

Next, we saw a group of White-fronted Nunbirds, they too were very noisy and well appreciated by the group, a second and third sighting of Great Tinamou followed a very showy Bright-rumped Attila. Hummingbird sightings were few, a Blue-chested Hummingbird was the only one found during this walk.

As the afternoon progressed more and birds became active we enjoyed lots of great sightings you could not move 20 meters along the trail without something flitting through the understorey. A  Chestnut-coloured Woodpecker was nice and the Rufous Motmot was amazing, this bird nests in a huge u-shaped hole in a sand-bank which it excavates itself.

Towards the end of the walk we found two species of Manakin in the same tree, White-collared and White-ruffed, these enigmatic little gems are highly prized sightings by all of my groups, it was hard to drag them away. The walk ended around 4:30pm we said goodbye to George our guide and got onto the bus. 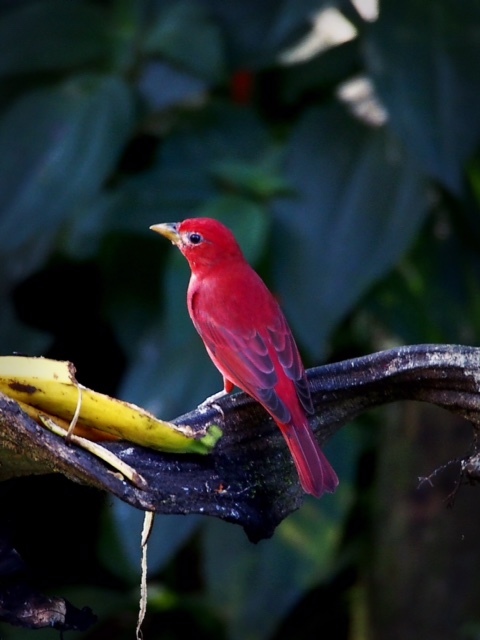 We never drove straight back to Selva Verde Lodge because we made a detour to a place along a track that borders the La Selva reserve. An open area of farmland has several huge Tonka Bean Trees dotted over it and this where Great-Green Macaws come to roost, it is also a favourite hunting ground of the Bat Falcon.

We arrived as the light began to fade, the sunset a colourful back-drop to the scene. Several Red-lored Parrots dashed about just before our first Bat Falcon sighting, most of the group compared the falcon flight and behaviour to the Eurasian Hobby, it performed really well as it was now dusk which was ‘Bat-hunting’ time. 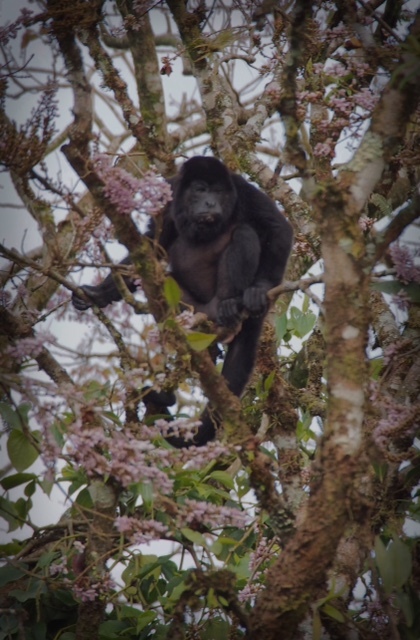 A selfie - taken by Craig Lewis

Great-Green Macaws were thin on the ground, we only saw two but a really, surprising find was of two Scarlet Macaws!! This species is only usually found on the Northern Pacific coast. Later we learned that a new colony of Scarlet Macaws was being formed here, even more reason the preserve the surrounding habitat.

After dinner we called the bird-log, 32 new species joined our growing list, we are five days into the tour and we have seen just under 220 species, what an amazing tally in a wonderful diverse country.