WEATHER:  clear and sunny with some afternoon cloud, warm all day

An early morning mist shrouded the compound at 5:30am but by 6 it had completely cleared, a clear blue sky appeared and as the sun came up the light was just exquisite. We took a short walk to the river to look for our main target species, the Sunbittern.

On the river-bank we had the most wonderful birding experience in just perfect weather. The light was the best of the trip so far and out of the 20-30 species seen, 4 of them were new for us.  A scan across the river produced a number of species, Green Kingfisher, Ringed Kingfisher, Mangrove Swallow, Bare-throated Tiger-Heron, Little Blue Heron, Snowy Egret, Black Phoebe, Spotted Sandpiper and Neotropic Cormorant, but not the Sunbittern! 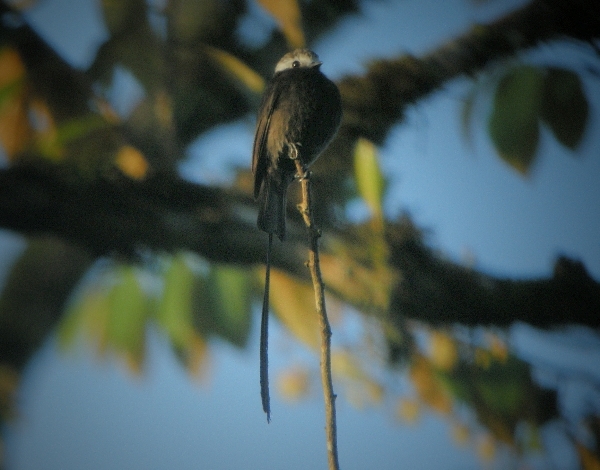 The surrounding forest was alive with wildlife; birds, butterflies, insects, Howler Monkeys and the sound was incredible. We found our first Grey-capped Flycatcher, a Long-tailed Tyrant showed well as did two species of Toucan, Collared Aracari, White-crowned Parrots and lots of locally common species.

Above us we had good numbers of Southern Rough-winged Swallows, Vaux’s Swift and our first Lesser Long-tailed Swift which looked fantastic in the morning light. Flocks of Oropendolas flew over as did Brown-hooded Parrots, also Grackles, Kiskadees, Tropical Kingbirds, Tanagers, Cattle Egrets, Black and Turkey Vultures and a single Broad-winged Hawk. 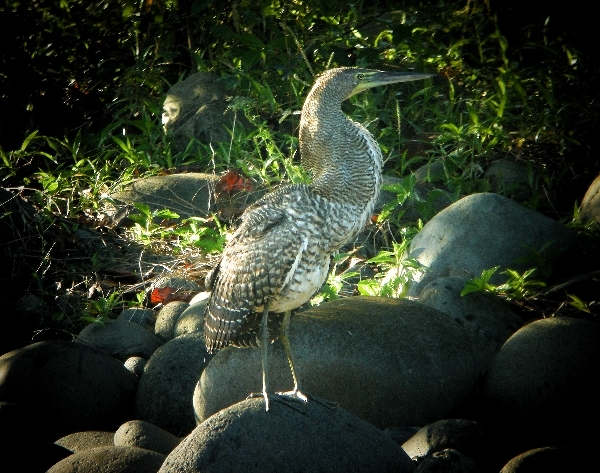 We really had to force ourselves to leave this magical wildlife-kingdom to go for breakfast, two hours had flashed by, but we had to eat. An hour later we met in the reception area and went for a walk outside of the confines of the lodge, first we visited a small botanic garden just across the road. Not too many plants were in flower so we were disappointed with the lack of hummers, however, a fruiting fig was alive with birds. 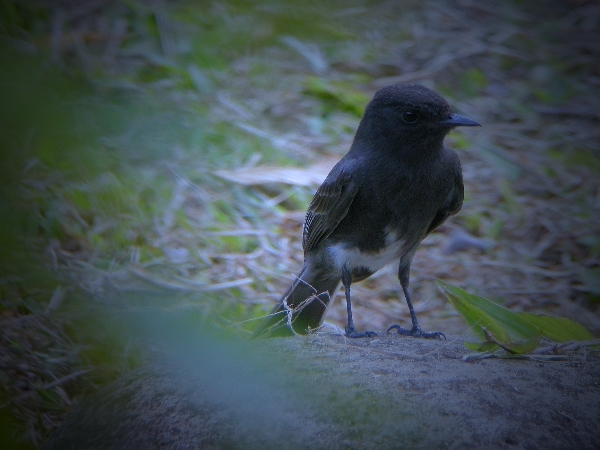 Just in this one tree we watched over 10 species with Paltry Tyrannulet, Yellow-crowned Euphonia and Shining Honeycreeper all being new for us. They were joined by Clay-colored Thrush, Passerini’s, Golden-hooded, Blue/Gray and Palm Tanagers, Buff-throated Saltator, Chestnut-sided Warbler and Social Flycatcher.

Plenty of butterflies were on the wing which kept a number of the group happily taking photographs. We continued our walk and as the morning progressed the temperature and humidity rose. A track led us back down to the river where we searched for Sunbittern once more. A Black-crested Coquette sat nicely for us but over the next hour failed to produce the bittern or any other new species. We did have a good panoramic view of the river from a bridge where the usual herons, egrets, swallows and kingfishers were seen.  A Broad-winged Hawk circled above us with the vultures and more Vaux’s Swifts dashed about. 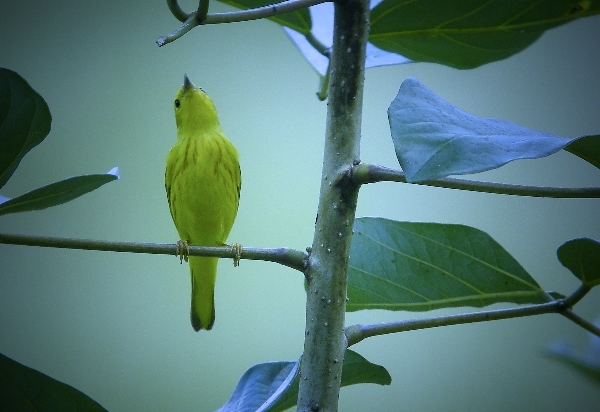 As we returned to the lodge we discovered our first Groove-billed Ani and also a beautiful male Yellow Warbler, one of the group picked up a dead White-ruffed Manakin, it had flown into a window. 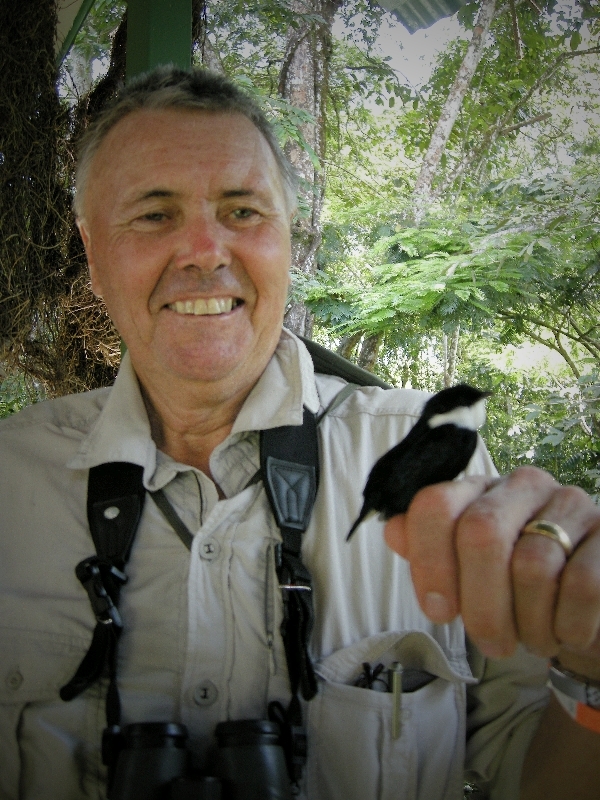 yours truly - with the White-ruffed Manakin

We took a short-break until 12:00 noon when we decided to drive to La Selva after receiving information about the location of two Vermiculated Owls. We arranged a very quick guided walk to the site and sure enough there they were. We also saw Rufous-tailed Jacamar and a few locally common tanagers.

Our lunch break was an extended affair, after the owl ‘twitch’ we stopped to buy lunch supplies and then drove back to Selva Verde to eat them on the terraces of our cabins. 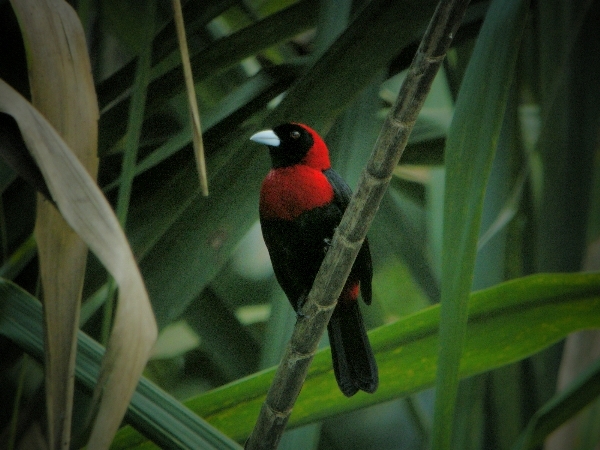 Later we drove back to a local hotel to bird-watch in their gardens, they also have a river-trail where they quite often see the Sunbittern. Well of course we never saw the bittern but the gardens were interesting. A large bird table attracted many species including a new species of tanager for our list, the Dusky-faced Tanager. We also added Black-headed Saltator and had great views of the popular Crimson-collared Tanager. 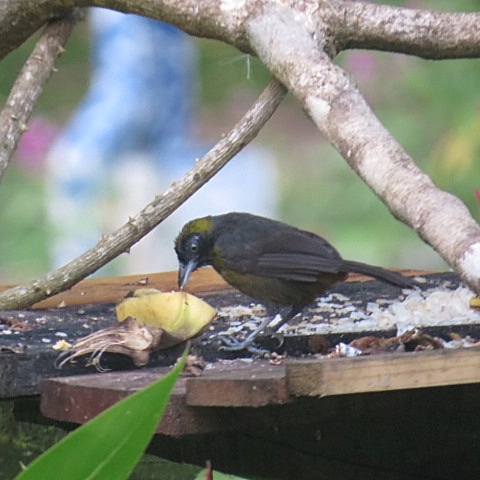 A couple of Great-green Macaws flew over us and we had sightings of Buff-rumped Warbler, Northern Waterthrush, Green Kingfisher and lots other species. We called it a day at 5pm and headed back to hotel.

Tomorrow we set off for the cloud forest at Tapanti where a new suite of species are waiting for us.