What a fantastic day we had today!! Superb weather, thousands of birds and great surroundings. For the last two years Donana Nacional Parque has been very dry but this year it held water everywhere and it was covered with thousands of birds.

We set out in the dark at 7am carrying our breakfast in a bag, we drove across to Villamonrique noting a single Red-necked Nightjar flying in front of the bus along the way. We stopped at a crossroad where in previous years I have seen Tawny Owls but alas none were there now. We did find a couple of Eurasian Hoopoes and we heard Common Quail calling very close to the road.

Iberian Magpies dashed across the road in front of the vehicle as we made our way to the Coredor de Verde. Telephone wires held birds on every section it seemed, Corn Buntings, Serins, Greenfinches, Goldfinches, Bee-eaters and a Melodious Warbler were noted. A Black-winged Kite was noted by those in the front seats.

We parked up and ate our breakfast whilst listening to a crescendo of bird song, leading the way were Common Nightingales, Cetti’s Warbler, Serin, Corn Bunting, Common Cuckoo and lots of finches. Our first walk took us along a track with open meadows and scattered bushes, we searched for a second Black-winged Kite but only found; Common Cuckoo, Woodchat Shrike, Red-legged Partridge, Common Whitethroat, Sardinian Warbler, Zitting Cisticola, Melodious Warbler and lots of finches. 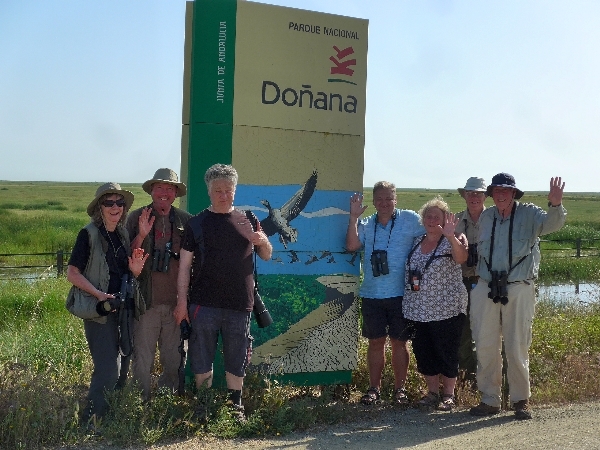 my bunch of 'spanners'  -  wingspanners that is!

The next track produced the Kite but a little too early on because we inadvertently flushed it, everyone got to see it in flight. We continued along this track for a very long way finding a Wryneck in a dead tree and a broken bridge some 5 -6km along the track. We had to turn back and during the return journey there were two Wrynecks in the dead tree! Back on track we stopped at a bridge to look for Penduline Tit, only finding Cetti’s Warbler and a Common Kingfisher, just after the bridge we saw a Hobby flying across the front of us.

A short stop at a Eucalyptus wood gave us great views of Spanish Sparrow, there were thousands of them! Over 50 Bee-eaters flew all around us as well as; Black Kites, Short-toed and Booted Eagles, a female Montagu’s Harrier, more Whinchats and a couple of Northern Wheatears were additional sightings.

We passed through the flat landscape of the rice fields, they looked barren and dry having just been ploughed and made ready for seeding. At the large water-storage reservoir Dehesa de Abajo we stopped to scan for ducks and Red-knobbed Coots. It was fairly quiet not too many species out there. We quickly found both Great-crested and Little Grebes, Red-crested and Common Pochard, Northern Shoveler, Western Swamphen and we heard Great Reed Warbler.

Red-knobbed Coots have been present here for my last few visits but we couldn’t find them today, we added Black-necked Grebes, Great Reed Warbler and Collared Pratincoles to our sightings list. After checking some pools along the road for coots we pulled over to a venta for lunch. We ate omelette sandwiches for lunch, yummy! The venta had no water supply today so no caffeine for the group. 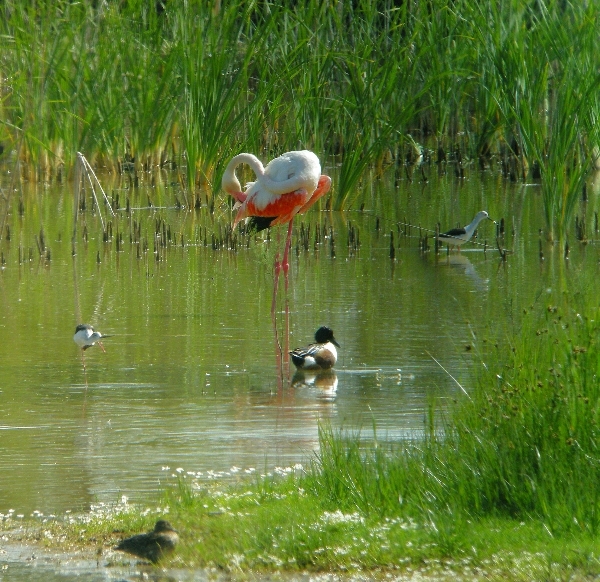 For the rest of the afternoon we drove through the northern marshes heading towards the Nacional Parque, nothing prepared us for what we were to witness. We stopped lots of times to watch birds on wires, birds on posts and imaginary birds such as tufts of grass or mounds of soil! We added Lesser and Greater Short-toed Larks, Calandra Larks, Lesser Kestrel, Marsh Harrier, Purple Heron and we saw lots of Yellow Wagtails, Whinchats, a Common Redstart and more Northern Wheatears.

Arriving at last to the wetlands we were greeted by acres and acres of flooded meadows that were just covered in birds, thousands and thousands of them, I don’t know where to start! The sky was just teaming with life, long ‘strings’ of Glossy Ibis criss-crossed the sky ahead of us whilst Night Herons, Cattle and Little Egrets, Squacco Herons dashed about and the number of Purple Herons was just amazing. A huge breeding colony has formed in the tamarisk trees out in the marsh where dozens and dozens of several species were nosily going about their nest building business. 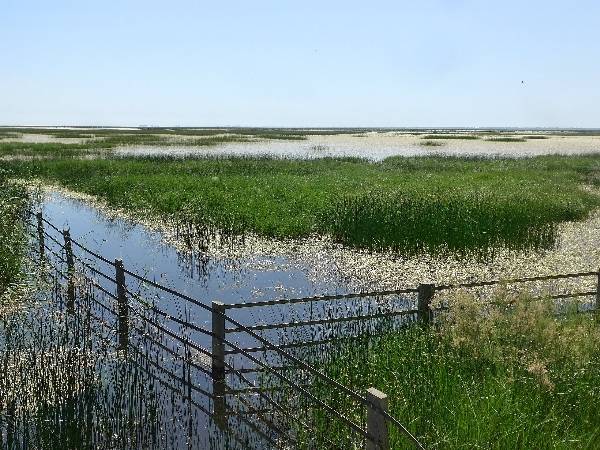 The vibrant colours of Red-crested Pochards the bright blue sky, the green reeds and white of the egrets stood out in the clear bright afternoon sunlight. Greater Flamingos numbered in their thousands they were spread out as far as the eye could see and the noise from dozens of Great Reed Warblers was incredible. We just marvelled at this sight, the superlatives just streaming from our mouths, it was just stunning. 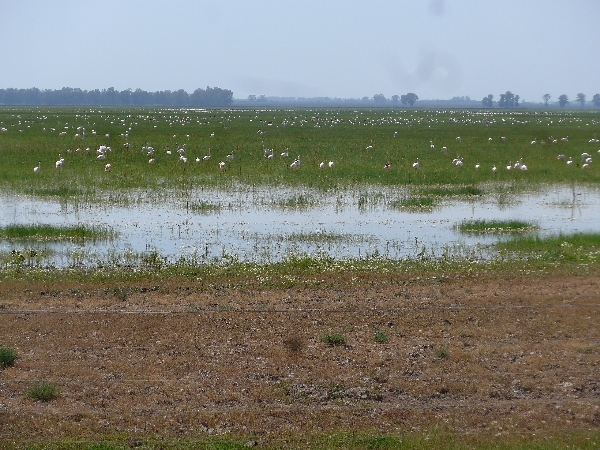 Greater Flamingos spread out as far as you can see

Once we got down to scanning the area we started to find some interesting species, a small group of very distant Sandgrouse sat by the water’s edge, they gave us a testing time until we got better views of them and identification was determined as Pintail Sandgrouse. We noticed a group of Collared Pratincoles above us, lots of Whiskered Terns, the occasional Western Swamphen, a White-headed Duck, Black-necked Grebes in full summer regalia.

Our visit to the Jose Valverde Centre was equally as good, the number of Wood Sandpipers must have been around 100, likewise Ruff some of which were turning colour ready for the breeding leks further north. We found several Garganey, Spotted Redshank, Common Snipe, Pied Avocets, Eurasian Teal, Northern Shoveler and more Western Swamphens. 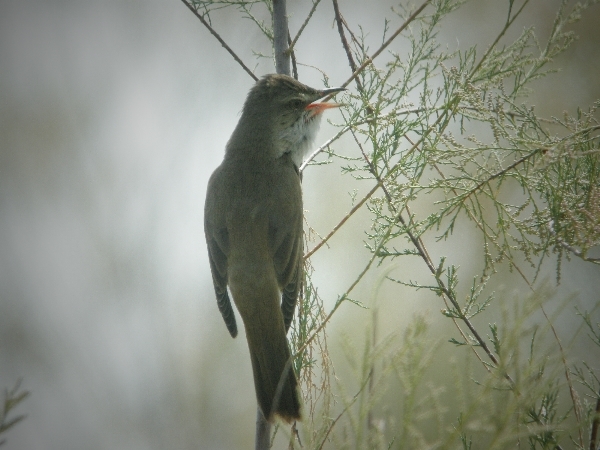 The journey back was via different tracks but the landscape was just the same and equally as full with birds. We added Gull-billed Tern, Common Shelduck, Black-headed and Yellow-legged Gulls, both Common Redshank & Greenshank and more Common Sandpipers.

Our bird-log this evening was extensive, we had seen 107 different species, an amazing tally for a day out in the marshes, Donana is as good as ever.